In a surprise 11th-hour filing quietly leaked to the national media, prominent civil rights activist DeRay Mckesson added his name to the crowded list of mayoral candidates vying to lead Baltimore after one of its most trying years in decades.

Mckesson, who was born and raised in Baltimore, gained national prominence in the movement ignited after a police officer shot unarmed black teenager Michael Brown in Ferguson, Missouri, in 2014.

Since then Mckesson has been a key figure in Black Lives Matter protests, including Baltimore’s protest and civil unrest following the in-custody death of 25-year-old Freddie Gray in April.

With nearly 300,000 followers on Twitter, Mckesson is a social media ninja who is seemingly everywhere in public life – lecturing at Yale University one minute, discussing white privilege with Stephen Colbert the next.

So why did the 30-year-old Bowdoin College graduate decide to plunge into the gritty world of Baltimore politics?

In a post on Medium he said he loves the city of his birth and wants to help it realize “its promise and possibility.”

“We cannot rely on traditional pathways to politics and the traditional politicians who walk that path,” Mckesson said. “We have to challenge the practices that have not and will not lead to transformation.”

The place where Mckesson filed tonight, the city Board of Elections at 417 E. Fayette Street (coincidentally right next-door to police headquarters), was far from the national media spotlight.

Before the 9 p.m. deadline, watched over by a clerk, Mckesson filled in the paperwork to file as a Democratic candidate for mayor, running in the April 26 primary.

He entered an address in North Baltimore on Bryn Mawr Road, his @deray Twitter account, and this email deray@thisisthemovement.org. 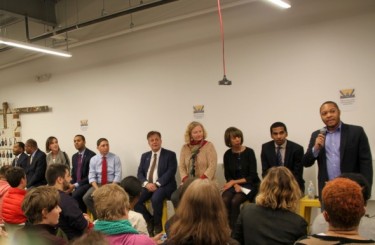 The long line of wannabe mayors at a recent candidates’ forum. (Photo by Fern Shen)

There was jubilation in many quarters after his surprise filing.

“I wish you unimagined blessings, laser-like focus and unshakeable fortitude in this endeavor. Go!!” one person wrote on Medium.

“A risk worth taking for you, the city and all who watch,” wrote another. “The world is at your back. . . Go get it you will win.”

Supporters speculated that excitement over Mckesson would bring new younger voters to register and come to the polls, up-ending a race in which former mayor Sheila Dixon is widely regarded as a mortal lock for re-election.

Some were fairly brutal last night about the other candidates.

“Now there’s hope so take your giftcards, 15 point plan, your truck, your years of doing nothing and go sit down,” wrote @SAThurstonDC.

The gift cards mention was a reference to Dixon forced out of office in 2010 after pleading guilty to embezzlement for taking gift cards intended for poor children.

The 15-point plan? That was a reference to the platform released by Nick Mosby, husband of State’s Attorney Marilyn Mosby.

The truck reference was a jab at Warnock, who recounts in stump speeches and his television ad how he “came to Baltimore 33 years ago in a pickup truck with a load of student debt.”

Some last night questioned whether Mckesson, even with his star power, could attract enough votes this late in the game in among an electorate dominated by older voters who are unfamiliar with him.

“Who?? I am in the schools and all over Baltimore,” one wrote. “They don’t know @deray, parents don’t know him.”

Local activist Kwame Rose wondered whether Mckesson is “invested enough in Baltimore to be the next mayor.” 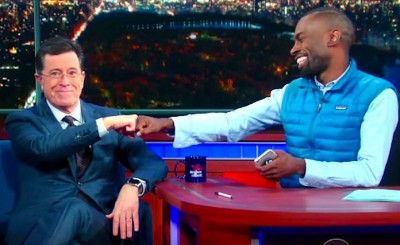 “Now let me tell you a really uncomfortable truth. In Baltimore, it’s the Democratic Party that is the party of systemic oppression,” Brown said. “Democrats in Baltimore have allow hypersegregation to metastasize. The #BaltimoreUprising was a stinging rebuke of Baltimore Dem policies.”

“In Baltimore, the Democratic Party is the machine,” Brown continued. “Democrats use tax breaks (TIFs/PILOTs) to advantage the rich at the expense of the poor.”

In his Medium post, Mckesson describes his connection to the city.

“From Ms. Rainey’s second grade class at Rosemont Elementary School to the mixes of K Swift & Miss Tony on 92Q, to the nights at Afram, Shake N Bake and the Inner Harbor, I was raised in the joy and charm of this city,” he wrote.

Speaking with The Brew, Mckesson said he grew up in the Poplar Grove and Presbury neighborhoods and went to Catonsville High School.

In his written statement, Mckesson said he understands the city’s pain.

“As the child of two now-recovered addicts, I have lived through the impact of addiction.” he said. “I, too, have received the call letting me know that another life has fallen victim to the violence of our city.”

Mckesson acknowledges he is not a traditional candidate with prior experience in public office. He taught middle school through Teach for America and worked as an administrator in Baltimore City Public Schools and in Minneapolis Public Schools.

But his statement covers the traditional range of governance issues beyond those of the Black Lives Matter movement – “job development, job access, grade-level reading, transportation and college readiness.”

And he calls for a release of internal audits of the city school system and for “annual and timely audits of all city agencies,” and promises to release a full platform in the coming days.

In the end, he offers his own redemptive family narrative as his best credential.

“Perhaps because I have seen both the impact of addiction and the power of recovery,” he writes, “I hold tight to the notion that our history is not our destiny. That we are, and always will be, more than our pain.”