Since 2010, when she resigned as Baltimore’s mayor, Sheila Dixon signed off on campaign finance reports that, she now admits, overstated what was in her campaign treasury by almost $200,000.

Actually, she never disclosed that information.

Rather, her campaign committee, Friends For Sheila Dixon, last year submitted to the Maryland Board of Elections a total of 133 financial amendments, some dating back to 2006, in an attempt to clear up the matter.

The disclosure of these amended reports by the anti-Dixon blog Baltimore Rising has incensed Dixon supporters, who say she is being punished for her honesty.

“This is where I start to see red,” Dixon advisor Martha McKenna said in an interview yesterday. “This is a blog that doesn’t disclose its donors. So it’s maddening that they are going after Sheila Dixon for working through this process of correcting errors.”

Others see it differently.

“This is one of the strangest filings I have ever seen in Maryland campaign finance,” said Jennifer Bevan-Dangel, who has seen a lot of political oddities as the executive director of Common Cause Maryland.

“Because this is such a strange situation,” Bevan-Dangel continued, “Dixon should release her campaign committee’s bank account balances for the last few years so the public can see if this was a proper accounting error.”

Asked about releasing such information, McKenna indicated that Dixon believes she has fulfilled her financial duties through the amended reports and wants to move on.

Both the original and amended financial statements were signed by Geneva L. Smith, a Randallstown realtor who serves as Dixon’s volunteer campaign treasurer. Smith could not be reached at her office or home addresses.

According to McKenna, the reporting problems stemmed from incompatible software used by the campaign committee and the elections board.

Once the issue was discovered, she said, the campaign worked diligently to correct the mistakes.

“For one reason or another,” McKenna said, a series of expenditures by Dixon’s committee in 2006 and 2007 did not transfer from the campaign’s NGP Van software into the state’s reporting system.

“So the amendment process was about reflecting the expenditures on the appropriate report,” McKenna said.

“Say you have three checks. You have to put them in the right report. Then, moving forward, any report that comes after that also needs to be amended.”

The result was a “cascading effect,” she said, because the campaign had to file separate statements for individual expenditures or unrecorded income. “That’s why you can have several amendments filed on the same day.”

Filings by Other Candidates

Financial amendments to campaign reports are quite commonplace, but typically they involve one or two changes by a candidate. 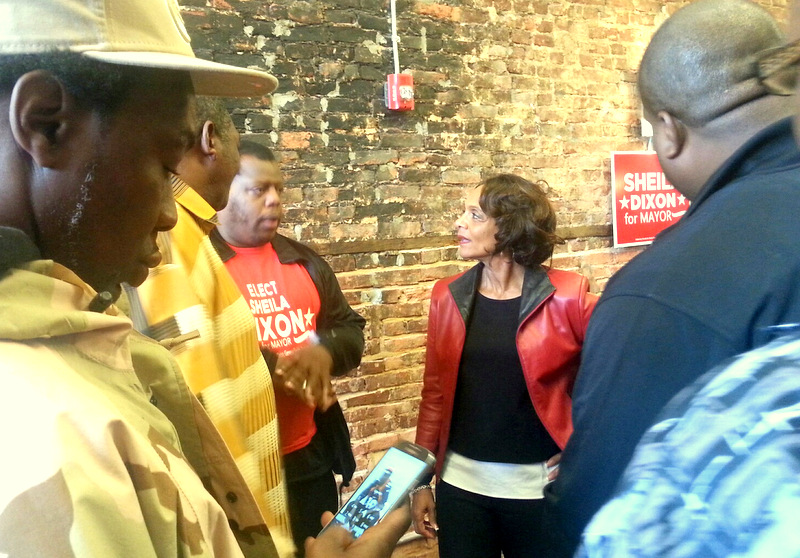 The former mayor speaks to supporters at the opening of her campaign headquarters last October. (Photo by Ed Gunts)

Mayoral candidates Nick Mosby and Carl Stokes each amended their finance reports once last year. (Mosby and Stokes are members of the City Council.)

Those changes did not not alter the amount of cash they reported.

What makes the Dixon case doubly peculiar is that she has been out of office for so many years.

While on probation between 2010 and 2013 following her embezzlement conviction for misuse of gift cards, her campaign committee was dormant.

The committee kept its surplus cash at its account at The Harbor Bank of Maryland, but did not collect additional campaign funds, according to its election board filings.

Over this period, the committee reported spending only a few thousand dollars a year in telephone and storage bills.

Two weeks later, though, it amended that filing to say its cash balance was actually just $119,405.

From that point until March 13, the reported balance went up, but mostly down (see box below), until the committee settled on a balance of $77,896 – a 72% drop from what was reported on January 14.

McKenna was asked if there was a lightbulb moment when Dixon realized that the financial reports were out of kilter (for instance, by looking at the campaign committee’s account statements from Harbor Bank)?

McKenna said she doesn’t know. “I do know that at some point in 2014 it was realized that we were off. Then there was a lot of work put in to figure out where the reporting errors were, and to go back and make sure that everything was corrected properly.

January 14, 2015 cash balance of “Friends For Sheila Dixon,” as reported to the Maryland Board of Elections: