The city’s newest monument is being planned to celebrate Glenn Harris Milstead, the actor known as Divine, who came to fame in movies by Baltimore filmmaker John Waters and died in 1988.

The “Divine Shrine” will be created on the side of a building at Read and Tyson streets in Mount Vernon.

That’s near the location where Divine filmed the daringly disgusting sequence that brought him and Waters international recognition – the final scene in Pink Flamingos where a triumphant Divine, having vanquished his rivals for the title of “Filthiest Person Alive,” scoops up a handful of fresh dog droppings and eats them.

Design Fits in with Locale

The design by Baltimore artists David Hess and Sebastian Martorana starts with a marble archway, three feet wide and eight feet high, reminiscent of those found on entrances to any number of Mount Vernon’s Victorian townhouses.

At the top of the arch is a single word, “DIVINE.” Beneath it is a black-and-white, laser-etched photograph of Divine’s face on black granite, glaring out from the doorway.

Leading up to the arch are two white marble steps, similar to those found in row house neighborhoods all over Baltimore.

On the top step is a small bronze sculpture representing what Divine ate on his way to international cult status.

(Visitors may have to look twice before they realize what it is – and that it isn’t real.) 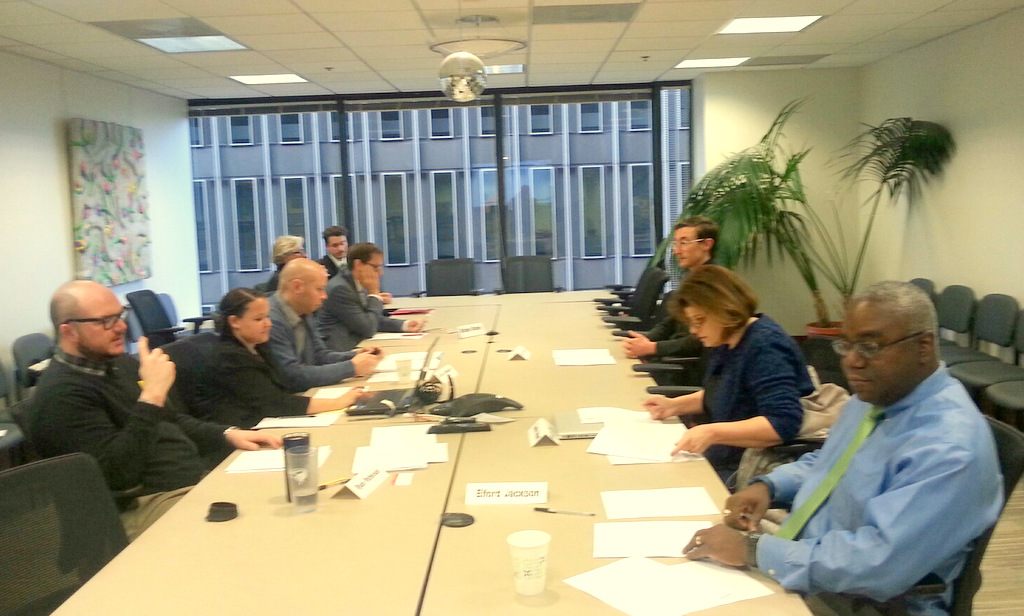 Members of the public art panel lauded the proposed shrine at yesterday’s meeting, saying it will increase tourism. (Photo by Ed Gunts)

A group of six monument planners, led by Alex Fox and Michal Makarovich, launched a Kickstarter campaign last month to raise $70,000 for the monument, so no public funds will be required.

They also created a website that explains the project: divinemonument.com.

“We think people will come from all over,” Makarovich said. “We’re hoping this will help revitalize Read Street.”

Panel chairman Elford Jackson asked whether the artists have permission to use the photo they selected and was told they do. He also asked about the possibility of vandalism.

“You don’t have any fears that those who aren’t Divine fans are going to pull out a can of spray paint and make their mark?” he asked.

The monument-building effort has received international media coverage from as far away as England and Germany. The Divine Monument website lists nearly two dozen articles or posts since January.

Many mention a quote about the monument from a spokesman for Mayor Stephanie Rawlings-Blake, saying “The mayor thinks that the idea sounds divine.”

Some headlines include “Mayor Gives Nod to Proposed Divine Monument (Including Bronze Dog Poop)” and “Drag Icon Divine May Get The Baltimore Monument She Deserves.”

Yesterday, a local news station dispatched a crew to film the deliberations of the normally obscure panel.