Citizens from the four corners of the city came together last night to plead for help with nuisance taverns and to pound the Baltimore Liquor Board for failing to respond to years of complaints from residents.

Permitted by the city to stay open seven-day-a-week, from early in the morning until the wee hours of the next day, these BD7s chronically skirt the rules requiring them to have on-site consumption, acting instead as cheap liquor stores that generate crime and blight.

Aisha Banks said the Liquor Board has not responded to years of petitions and complaints about one of those establishments in her neighborhood, 4 G’s Liquor on Liberty Heights Avenue at the Gwynn Oak Avenue intersection.

“We believe the Liquor Board, they are in their pocket. They are not for the people of Howard Park,” said Aisha Banks, speaking at a Liquor Board-sponsored Town Hall meeting near Pimlico.

Banks said that loitering, littering and drug-dealing occur around the store and that a murder took place outside the establishment recently.

Her husband John Banks accused the agency of allowing such nuisance establishments to flourish by knowing “how to get around the little nooks and crannies of the law.”

“I’m insulted by that. We are injured by that. Our young people are dying because of that,” Banks said, noting that an elementary school is just blocks away. 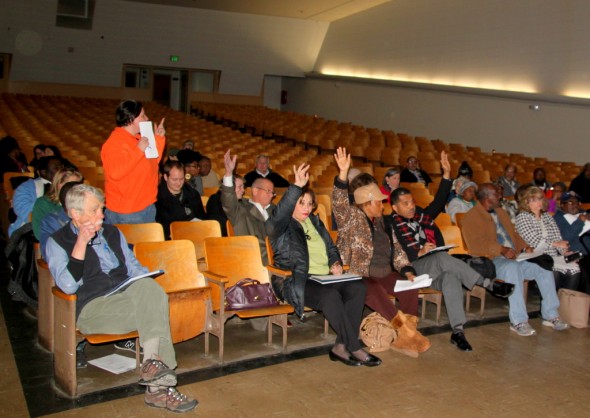 Who is here to complain about BD7 taverns? Hands shot up all over the room. (Photo by Fern Shen)

From across town in North Baltimore, Lisa O’Reilly of the York Road Partnership rose to say her community’s problems with taverns on York Road are much the same.

“This is what we’ve got to put up with, from 6 a.m. to 4 a.m.,” said O’Reilly, complaining about a tavern near her home in the 5400 block of York Road. She said community people are at a disadvantage against licensees and their skilled attorneys.

“There are laws,” she said, urging the agency to advocate for residents. “If you have power, you’ve got to fight for–”

“Us!” one of the women from Howard Park said firmly, finishing O’Reilly’s sentence.

The meeting, the second of a series of planned by the agency in various neighborhoods, comes at a turbulent time for the three commissioners appointed in July by Gov. Larry Hogan.

A coalition of community groups and the Community Law Center is lobbying in Annapolis against a Senate confirmation vote the three would need in order to remain in place after the close of the legislative session. 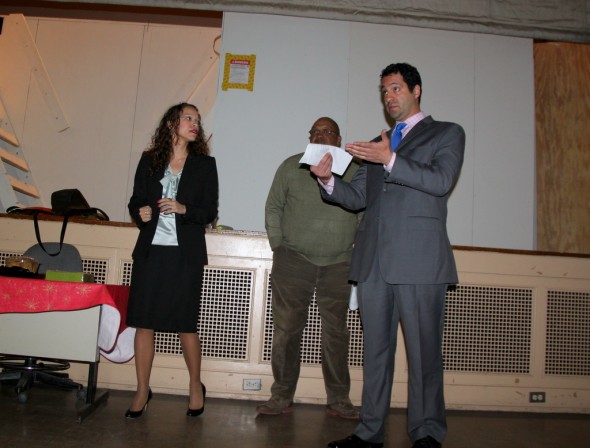 Commissioner Elizabeth A. Hafey last night, the only one of the three present, addressed the group of about 75 people assembled at the Baltimore City Public Safety Training Center in Pimlico, telling them, “I do not take this obligation lightly.”

“Before every hearing, I read the docket fully. I don’t make a determination until I hear from both sides,” Hafey said, noting that over the weekend she drove around Northwest Baltimore to prepare for the Town Hall gathering. “I’m here to listen. . . We want you to feel heard.”

But many speakers said they are not being heard.

Glord McGuire, a Howard Park resident since 1968, recalled going downtown to the Liquor Board 10 years ago as a member of the Howard Park Civic Association to complain about 4G’se patrons causing problems in the neighborhood and about the lounge not being open.

“We wanted to have them to not have a license to open on Sunday,” he said.

Nothing came of it and the establishment still keeps its on-site consumption area in the back closed, he said. (On a recent visit, McGuire said, the staff continued, selling liquor in the front and didn’t let him in.)

Reached by phone and told that multiple residents criticized his tavern at a public meeting, 4 G’s owner Steve Sohn said today that no one sells drugs inside his establishment and that he can’t be held responsible for what people do outside of it.

“I try hard,” Sohn said. He said he has hired security and called the police about problem patrons and cooperated with the community.

As for the lounge area (which Banks described as “dusty” and always locked) Sohn acknowledged that patrons have to be buzzed in – but said the room is used. 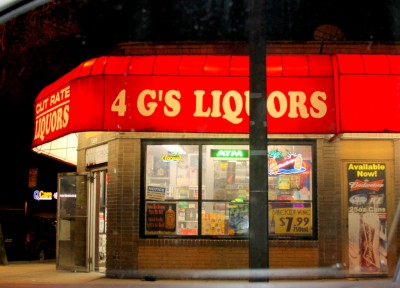 People at the Town Hall meeting said the city has ignored their complaints about 4 G’s Liquors in Howard Park. (Photo by Fern Shen)

Thomas Akras, deputy executive secretary of the Liquor Board, said their inspectors would be given the complaints about 4 Gs’ possible liquor law violations and that the drug activity would be relayed to the police.

But he said the agency’s hands are tied with BD7 licenses, “which were grandfathered in in the 1960s.”

Their license gives them the right to be open seven days a week, he said, noting that their hours and manner of operation “was given to them by law.”

Akras and John Howard, acting chief inspector, said they depend on the community to report potential violations.

“We do have a mechanism in place called 311,” Howard said.

Several speakers charged there is racism in the agency’s failure to crack down on nuisance taverns.

“It happens in communities where people look like us,” one woman said. “In black communities.”

Patricia Rideout, of West Arlington, said she was offended, as a taxpayer with small fines imposed for liquor law violations, in amounts like $500.

“I find it offensive that if I don’t cut my grass, [the fine] is more than what they pay!” she said. “They pay their lawyers more than you all make!”

What to do about it? One speaker suggested fining them a percentage of their gross receipts.

George Mitchell, of Neighborhoods United said citizens need to take matters into their own hands.