Diamond, an attorney, said she began biking to work downtown about three years ago, doing her part to save the planet by taking more cars off the roads.

Now with a dedicated bike lane on Roland Avenue to make her commute easier, “I’m very supportive of it,” she said.

But most in the audience have complained about the lane for months, and continued to oppose it during a question-and-answer period with transportation officials at the meeting at the Roland Park Presbyterian Church.

Critics say the design of the bicycle track, which is located next to the curb with a parking lane and two car travel lanes to its left, is dangerous to motorists and pedestrians, as well as bike riders.

They complained about visibility for drivers, the narrow width of the bike lane, and the estimated loss of 70 to 100 parking spaces on Roland due to the reconfigured road, among other issues.

She and other concerned residents have started the Facebook group called “Lane Sanity.”

Leslie Goldsmith, who is leading the group with Mary Kay Battafarano, said two of her tenants in an apartment house off Roland Avenue have lost side view mirrors on their cars while parked on Roland Avenue.

“I feel like my tenants are being used as buffers,” Goldsmith said.

A contingent of city officials led by Director of Transportation William M. Johnson walked into a lion’s den at the meeting, taking pointed questions and sarcastic quips from an audience of about 50.

Johnson stressed that the bike lane, part of a bigger project to repave Roland Avenue and make other “streetscape” improvements, is not finished yet. Lane striping and signs, to separate it from travel lanes for motorists, is expected to be finished by May, and crosswalks to be done in June, he said.

Johnson, northwest liaison Kohl Fallin and bicycle planner Caitlin Doolin said that once the project is finished, they will study usage of the lane and its effect on speeding and overall safety. 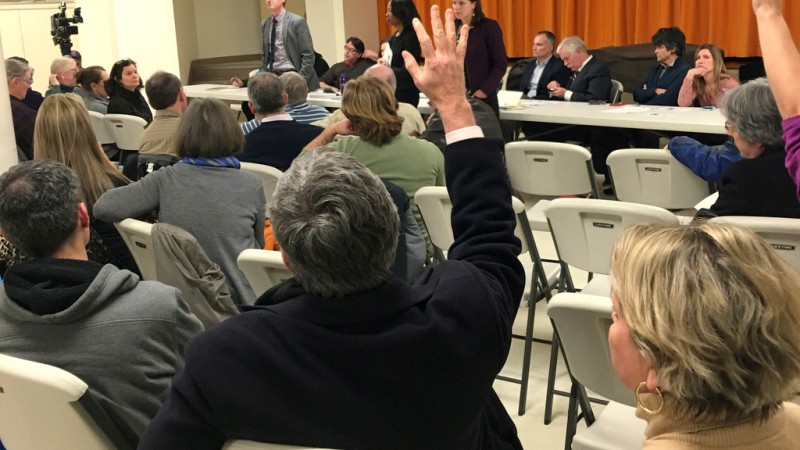 Mac Kennedy raises his hand with a question, while his wife Kim looks on. (Larry Perl) 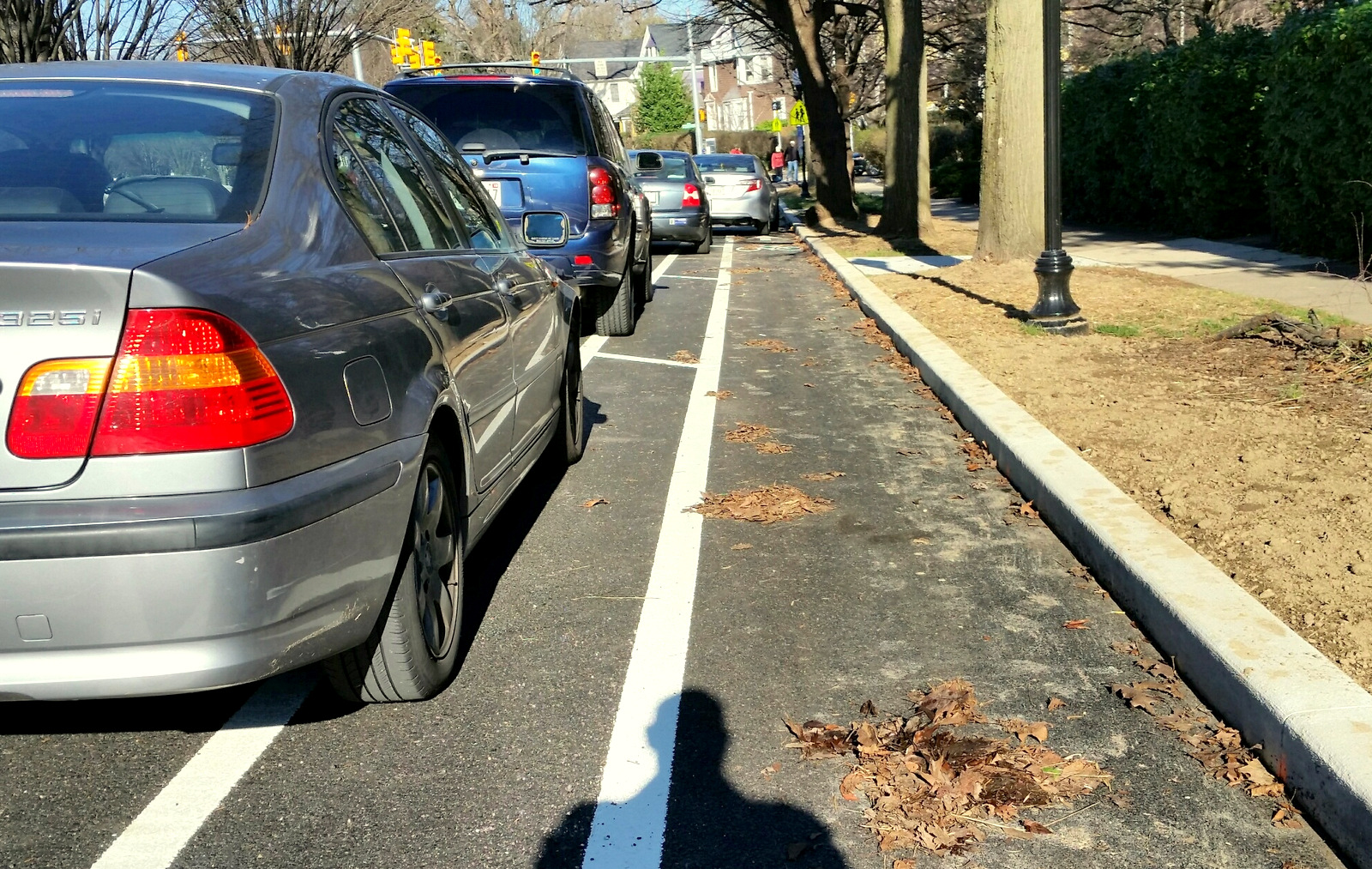 Cars park helter-skelter next to the cycle track on Roland Avenue near Wyndhurst Avenue. (Mark Reutter)

The civic league is forming its own committee, to be composed of residents for and against the bike lane, as well as representatives from the league board, said president Chris McSherry.

“There are things we will be continually evaluating and correcting,” Johnson vowed, saying the agency “is going to be here for this community as long as it takes to make this work.”

But Harold Davidov was unconvinced.

“The community is at much greater risk than it was before all of this started,” said Davidov, who owns Tuxedo Pharmacy on Roland Avenue. He said the bike lane is mostly done and that additional “tweaking” won’t change its dangerous design.

Although Diamond, who supports the cycle track, was in the minority at last night’s meeting, there are a lot more like her in Roland Park, McSherry said.

McSherry said she gets a lot of calls from supporters, for example, from parents who appreciate that their children can now safely ride their bikes to school.

The supporters don’t show up at meetings like this one – or an even more tense meeting last November – because “they don’t have questions or concerns,” McSherry said.

She also said some residents are reluctant to come to meetings for fear of getting into fights with neighbors, and tell her, in so many words, “I don’t want to get involved in the fray.”

Robert Ginyard, an aide to 6th District Councilwoman Sharon Green Middleton, said Middleton, too, gets a lot of calls in support of the bike lane.

But last night, the naysayers ruled.

“It just seems to me it wasn’t very well thought out,” Kim Kennedy told DOT officials. “It just doesn’t make a lot of sense.”