The 21 people who died in police encounters last year in Maryland were disproportionately black and nearly half of them were unarmed, the American Civil Liberties Union of Maryland has found.

Every single one of the unarmed individuals killed were black, according to the briefing paper. Maryland’s population is about 30% black.

The racial disparity was more pronounced than the pattern uncovered by a previous ACLU study looking at in-custody deaths that occurred between 2010 and 2014 in Maryland.

Last year, 81% of the people who died in police encounters statewide were black and nearly half were unarmed.

The highest number of police-related deaths last year was in Baltimore County (5), followed by four in Baltimore.

One of those 2015 deaths in Baltimore was Freddie Gray’s, which resulted in protests, a night of rioting and widespread calls for reform.

The report’s authors say the data suggest that the public attention and reform efforts haven’t made much impact on law enforcement so far.

The U.S. Department of Justice is currently conducting a civil rights investigation of practices by Baltimore Police, but has not made any official recommendations yet. The Police Department has made few changes in policing since Gray’s death except to implement a trial body camera program for officers in October, to be followed this May by the equipping of 500 officers with cameras.

“We have seen little evidence that Maryland police departments are engaging with the issue on a systemic level,” said Sonia Kumar, staff attorney for the ACLU of Maryland.

“Police agencies must commit to valuing the sanctity of all human life, regardless of race or class, and doing what it takes to infuse that into the culture, policies and practices of their agencies,” Kumar said in a statement released with the briefing paper. 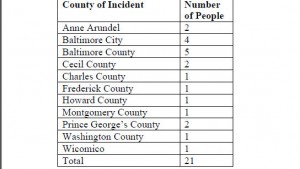 The jurisdictions in Maryland in which people were killed last year while in police custody. (ACLU of Maryland)

“This session, the General Assembly must reform the Law Enforcement Officers’ Bill of Rights to ensure that civilians have a meaningful role in the disciplinary process,” Love said.

Here’s the ACLU’s summary of findings for 2015:

• At least 21 people died in encounters with police in Maryland in 2015.
• The deaths occurred across the state – no region was immune.
• About 81% of those who died in police encounters were black and nearly half of them unarmed.
• Every single unarmed person who died in Maryland was black.
• About 38% of the people who died were unarmed.
• Nearly half of those who died displayed behavior that suggested a disability, substance abuse or mental health issues of some kind. Nearly all of these individuals (about 90%) were black.
• Although the leading cause of death was gunshot wounds, there were at least three instances in which someone died almost immediately after being tasered by officers.
• In 20 out of 21 cases, no criminal charges were filed. In several cases, the reviewing state’s attorney stated publicly that the killing was justified. (The exception was Marilyn Mosby, Baltimore’s state’s attorney, who filed criminal charges against six Baltimore police officers in connection with Gray’s death.)
• It was impossible to determine whether any officers were disciplined for misconduct in these cases “due to the uniform practice of police departments in refusing to release such information.”
• In most cases, there was little or no follow-up in the mainstream press after the initial reporting. Typically, there was little information about the person who died “other than a run-down of prior criminal charges.”