Reporters perched on the fringes of a key Baltimore Development Corporation committee meeting today knew they were going to be thrown out – after all, it happened last week and the week before that.

But some scraps of news were offered up before the hammer came down – the scribes were allowed to witness a few minutes of public discussion about the $535 million Port Covington Tax Increment Financing package the agency appears poised to approve.

To aid the discussion, a staffer had passed around an information sheet comparing the city’s rate of return for this record-setting TIF subsidy to that of previous TIFs for other projects.

A reporter’s request for a copy brought scowls from BDC staffers who said they had none for the reporters and were too busy to make any.

“A packet,” they said, would be provided in the outer office at the end of the closed session, which turned out to be a two-hour-long affair.

So the reporters sat outside the BDC board room’s closed doors, while a television blared outside the conference room and peals of laughter could be heard occasionally from inside the room.

The “packet,” when it eventually came, consisted of two pieces of paper, one with a graph and the other with a chart.

It was pretty much representative of the agency’s stance toward the press overall, as it reviews the sweeping proposal before them – a half billion-dollar financing package to pay for infrastructure for a proposed development that would remake the city’s Middle Branch waterfront.

Key meetings along the way have been closed.

The BDC’s Project Review and Oversight Board closed its meetings to the public on March 9 and March 15, prompting a complaint to the Maryland Open Meetings Compliance Board by Baltimore Brew, Baltimore Business Journal and The Baltimore Sun.

“We believe that the public’s interest is not being served by closing the meetings of the committee,” the news organizations said in a letter sent Friday to the Compliance Board, a part of the Maryland Attorney General’s Office.

Returns 20-Plus Years Down the Road

Before they again closed the meeting today, the BDC’s consultant, Keenan Rice, said the TIF benefits would be decades away.

“There are significant positive tax benefits, but the city doesn’t receive the returns until 20 years down the road,” Rice, president of MuniCap Inc., said. 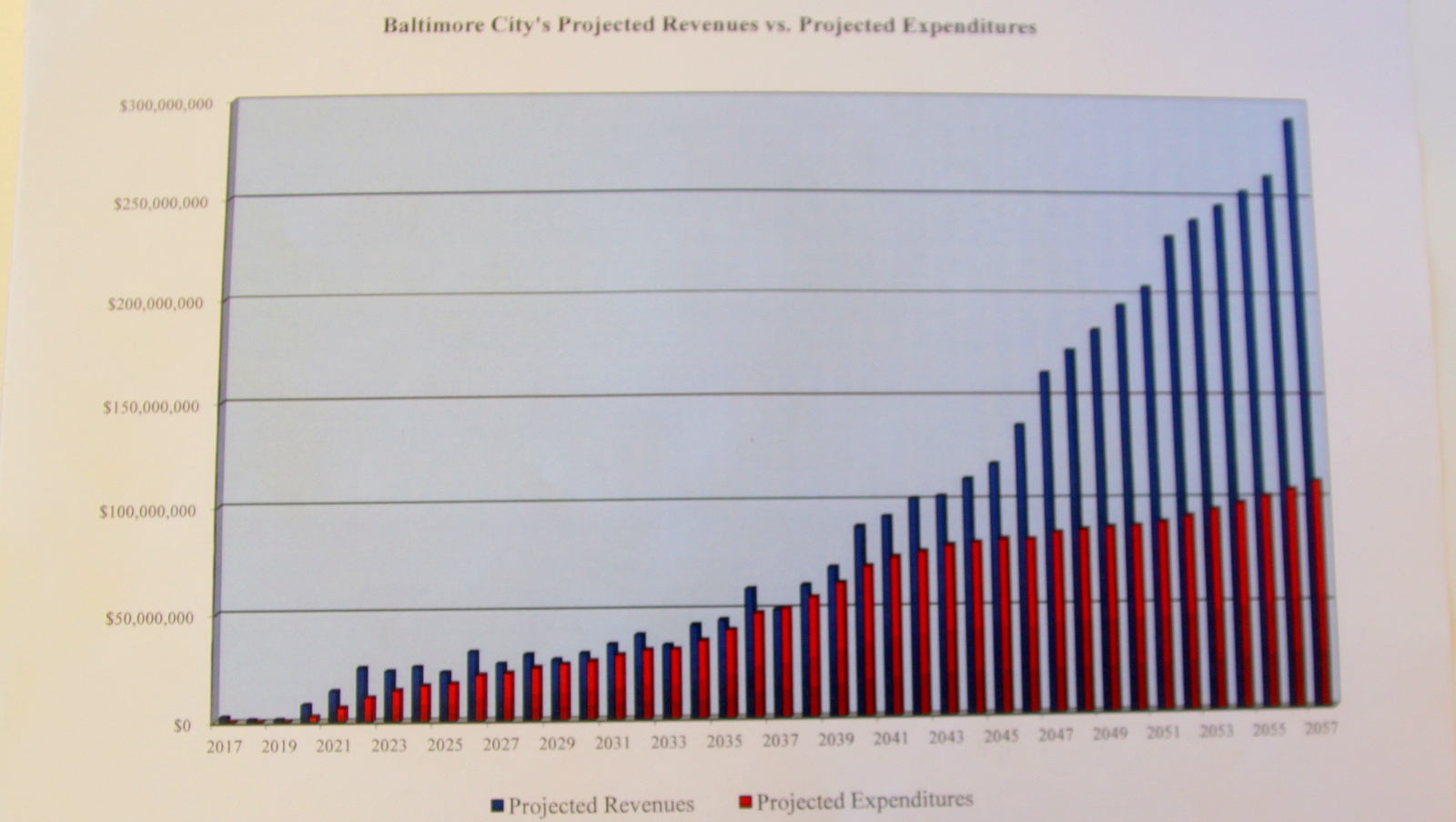 A chart showing projected expenditures compared to expected revenues indicated that significant returns would not begin until 2040, or 24 years away from now.

As for the comparisons with other TIFS, the data released today showed that the city’s “internal rate of return” on the Port Covington TIF would be 8.66%.

This compares to the projected IRR of 13.75% for the failed Westport TIF. Harbor Point’s IRR is estimated at 9.31% and the University of Maryland Biopark at 11.7%.

Rice acknowledged that the Port Covington rate was the lowest of the lot, but asked the committee to consider its size.

“While the relative return may not be quite as high as some of these other  projects, the magnitude of the return would really be, you know, probably be, the largest overall magnitude of return that we’ve seen for any project done in Baltimore,” he said.

He said 6% is the baseline IRR for a project to be viable.

Speaking with reporters briefly after the meeting broke up, BDC board chairman Arnold Williams declined to say what action the committee took today.

He said the meetings are being closed to the public to ensure that the members are comfortable asking all of the questions on their minds.

“We just wanted to make sure there were no questions unasked,” he said.

Williams said the committee was considering staff recommendation on the Port Covington TIF. Asked when the staff made their recommendation, he said, “Oh, they’d made it from the very beginning.” 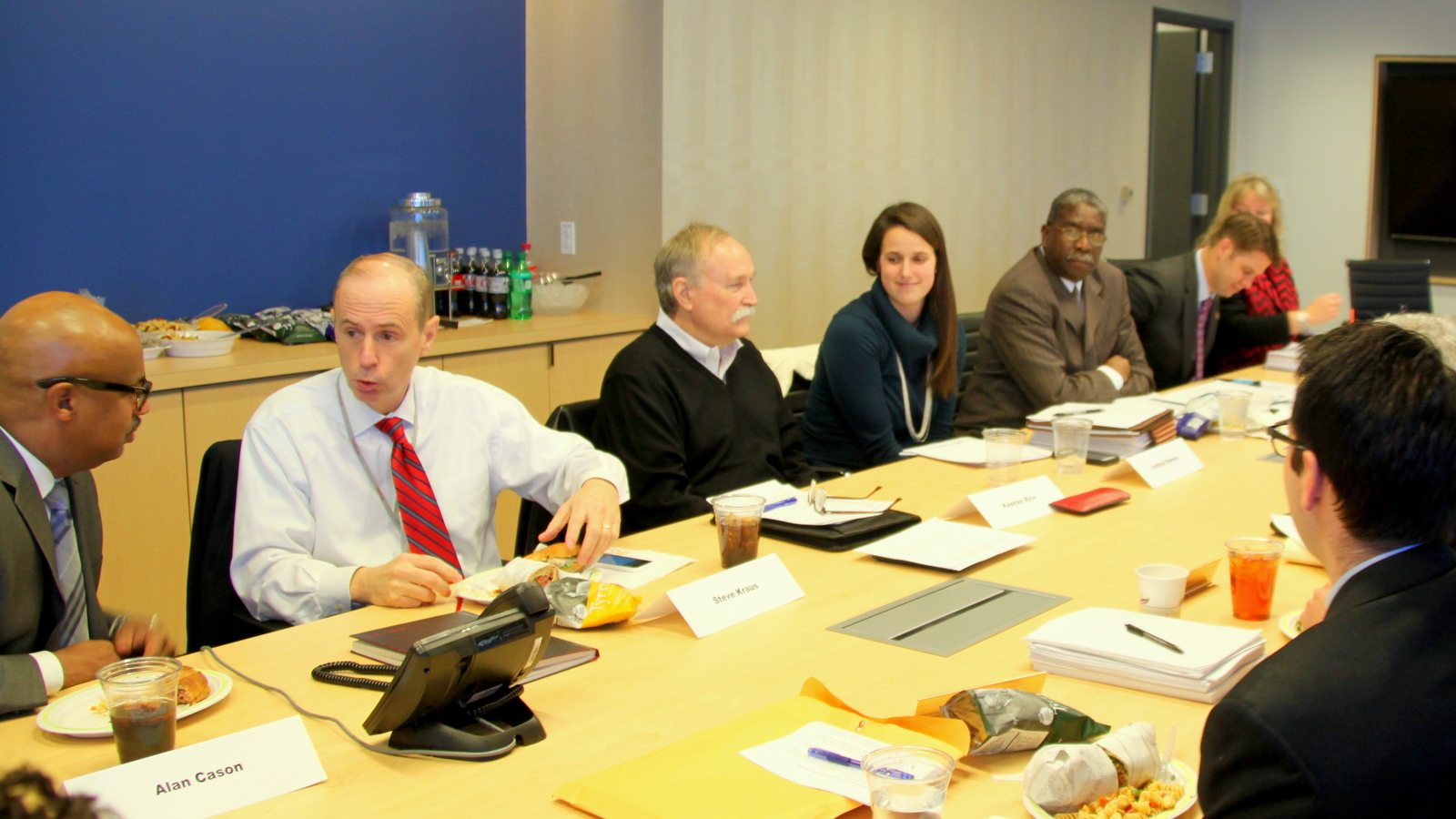 After the closed meeting was over, reporters sought to question BDC President William H. Cole (second to right). His communications director, Susan Yum, said he was busy and could not speak to the media.

“He has another meeting to go to,” she told reporters.

The full BDC board will meet this Thursday to consider the Port Covington TIF at the agency’s offices at 36 South Charles Street.