While Christianity has become a touchstone of the Republican Party, religion does not figure prominently in the vocabulary of Baltimore’s politicians.

Until now, that is.

Sheila Dixon, the Democratic Party front-runner for mayor or near front-runner (depending on which poll you read), has placed religious fervor near the top of her agenda.

For months now, her campaign has regularly emailed Biblical passages to her followers, accompanied by her signed homilies about their relevance to Baltimore and her aims as mayor.

With the approach of Easter, her messages have gotten more emphatic, seeming to invoke Christ’s sufferings as a parallel to her own tribulations over gift cards and martyrdom as Baltimore’s first mayor to resign from office rather than face a second corruption trial.

On Friday, for example, she quoted from Mark 14:58 and asked voters “to join me on my quest to Reclaim, Revive and Rebuild our future today.”

Her message ended: “Let us finish strong [in the April 26 primary?] and proclaim the hope and promise that our brightest days are ahead.” 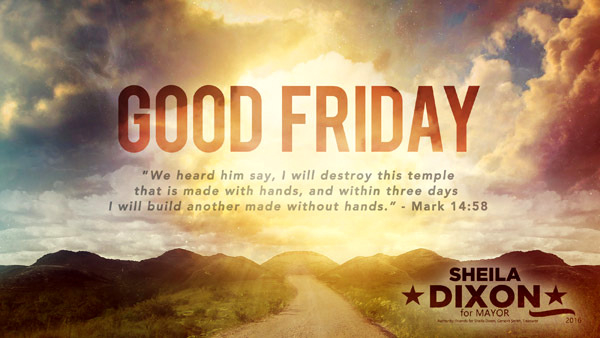 Today she reflected on Christ’s resurrection and said she gained strength “to know the power of His journey to the cross and the power that defeated the grave.”

Dixon told her followers that “our prize isn’t just winning, it’s winning based on His omnipotent love! . . . Whatever fear, despair or disappointment you have, know you are more than a conqueror. Together, we will Reclaim, Revive, Rebuild and Resurrect our city.”

With “resurrect,” she adds a fourth “R” to her campaign catchphrase, joining the other “R” words that have made up her motto since she announced her intention last July to regain her old job. 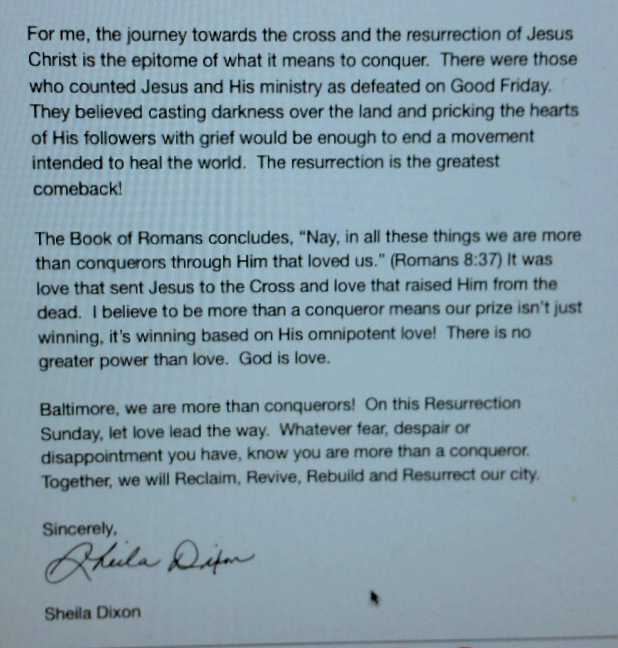