Considering the power of the City Council President – Baltimore’s No. 2 elected official and the next in line should the mayor’s office be vacated – the poor turnout at a recent campaign forum was striking.

Four candidates were onstage, gamely offering their strategies for tackling the city’s pressing problems, but just 18 people were in the audience, listening amid a sea of empty seats. There were no television cameras or other media aside from The Brew.

Amidst the hottest election year in recent memory, with mayoral and City Council forums taking place all over town, this campaign is a sleeper.

The incumbent, Bernard C. “Jack” Young, underscored this point by not bothering to show up at last Thursday’s forum.

While aware that their chances against Young are remote, for the candidates, his absence still rankled. “That the incumbent didn’t come and engage, that’s a disgrace,” said candidate Kim Trueheart, speaking before the event got underway. “I believe it’s incredibly disrespectful.”

With Mayor Stephanie Rawlings-Blake and five sitting Council members not seeking re-election, there will be different folks walking around the chambers of City Hall come December. (The last day for Rawlings-Blake and the current Council is Monday, December 5.)

But little is likely to change at the Council President’s office or, for that matter, the office of another entrenched incumbent, City Comptroller Joan F. Pratt.

Young’s current cash-in-hand – $664,127 – dwarfs not only the coffers of his challengers, but stacks up well against the high-profile mayoral candidates, who have been pouring their capital into TV ads and staff.

Compared to the mayoral race, Young has spent little on his re-election bid. There’s been $27,000 used for give-away buttons and bumper stickers, $38,640 for outdoor billboards, and just $600.14 for printed brochures, according to his March 22 finance report. 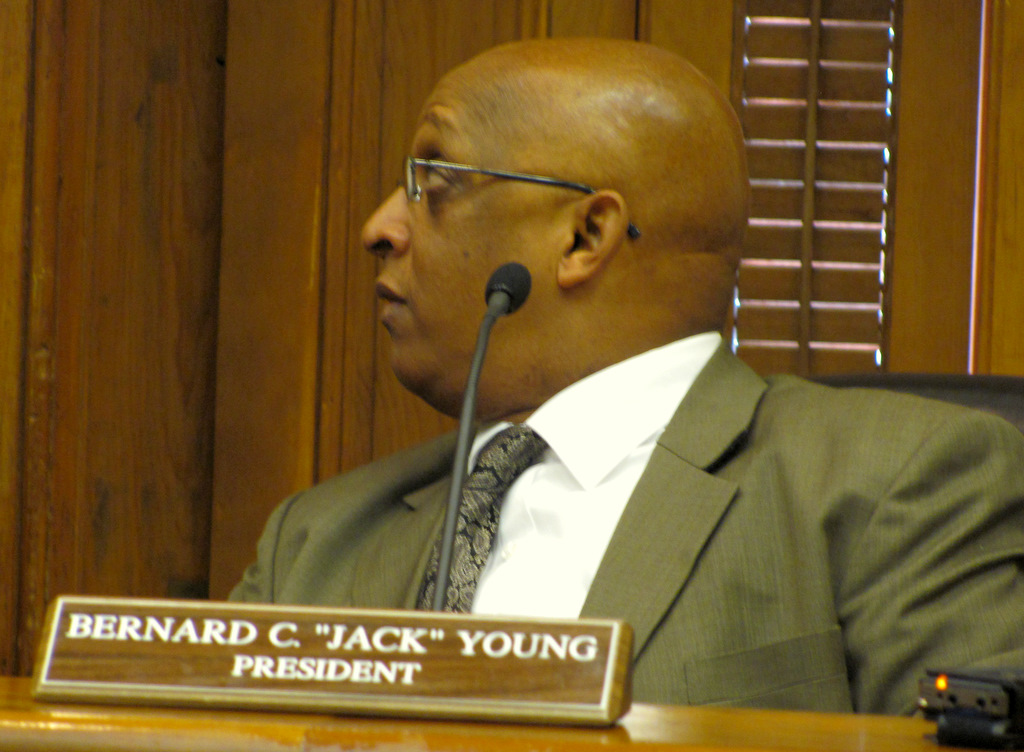 In 2014, Young denied using his clout on the Council to advance the 11th District candidacy of Eric Costello, who replaced William F. Cole. (Mark Reutter)

By comparison, Trueheart – a community activist known to needle Young by calling out to him from her seat in the audience at Board of Estimates meetings – reports a balance of “0.00” in her campaign filing. (The filing showed she raised $2,176.79 and spent that exact amount since she entered the race in early February.)

(Not attending the forum, in addition to Young, were Libertarian Susan Gaztanaga, who told organizers she couldn’t make it, and Republican David A. Wiggins, according to the forum’s moderator, Roberto Alejandro.)

Trueheart says Young has not spoken with her about why he would not come to the forum, but “he has told everyone he will not engage [in any forum] if I am in attendance.”

Young’s office did not return calls and emails from The Brew seeking comment for this story.

City Hall politics appears to come naturally to Young, who has solidified his skills in the $113,000-a-year Council President’s job that he has held since 2010.

A former manager of file clerks in the radiation department at Johns Hopkins Hospital, Young won his Eastside seat in 1996. After 14 years on the Council, he became Council President in the wake of Sheila Dixon’s plea and resignation as mayor, which bumped then-City Council President Rawlings-Blake into the mayor’s office.

Since then, Young has been a champion of youth and senior citizen programs and gotten legislation passed to require contractors with big projects subsidized by the city to hire Baltimore residents.

He has also been accused of heavy-handed tactics, especially during the brief but bitter fight over the 2014 vacancy of the 11th District Council seat that was filled by Eric T. Costello. (See Cold Brew.)

Last month, Young pushed through the Council the first override of a mayoral veto since 1982. The action preserved a charter amendment calling for the creation of a special fund to support enrichment programs for children and teenagers. (The amendment will go before the voters in November.)

At the Council’s meeting two days ago, he moved to increase his power through a bill, introduced by his 12th District successor Carl Stokes, that would give him more control over the Board of Estimates, the city’s spending board.

Under the measure, the board would be controlled equally by three members: the Mayor, the Council President and the City Comptroller. Under the current five-member structure, the mayor has a built-in majority voting bloc through her two appointees to the panel, the Director of Public Works and the City Solicitor.

None of the challengers to Young who participated in the forum at the Downtown Cultural Arts Center has held elected office. But all of them, coming from backgrounds as community activists and outsiders, had strong ideas about how city services could be improved and how government leaders have failed.

“My thing is the lack of caring representation for the citizens of Baltimore,” said Meek, who gained folk-hero fame in Baltimore after his op-ed about going to a police station after he was robbed of his bicycle – and finding it closed.

(Police officials ordered all district stations to stay open around the clock after Meek publicized what happened.)

Candidate Wright faulted the current leadership for allowing “crumbling infrastructure, schools in disrepair, children coming out of school completely unable to compete on a global scale.”

She said the city uses TIFs (Tax Increment Financing packages) “as a crutch,” and that the community benefit agreements intended to make up for the subsidies to developers should be a direct part of the TIF legislation.

“I say put it in as a direct clause in the contract, not a watered-down addendum,” said Wright, an ordained minister with a degree in business and economics from Virginia State University.

Sharon Black, of the Baltimore People’s Power Assembly, said she was running for the office “to make certain demands – a $15/hour minimum wage, jobs not jails, reparations and housing fit for human beings.”

Well-known for activism around police conduct and discipline issues, Black called for reducing the police budget and noted that”Baltimore has the highest amount of police per capita of any major U.S. city.”

A Hope for Change

Trueheart told the crowd how she joined the Navy after high school and came away from a 26-year military career with “management skills and experience and a lifetime of service that I’d like to dedicate to Baltimore City.”

She offered a range of policy proposals, including creating a “returning citizens” resource center for people getting out of prison. And she talked about her accomplishments as an activist, including saving a recreation center that became the Liberty Rec and Tech Center in Northwest Baltimore.

What would happen if Trueheart’s longer-than-long-shot candidacy were to make her the next Council President?

Mark Reutter contributed to this story.

Roberto Alejandro’s on background.com has full audio of the forum HERE.