Since 2007, Baltimore has had on the books an Inclusionary Housing Law designed to ensure that developers getting city subsidies build some units that moderate and low income people can afford.

The city’s decision that Kevin Plank’s Port Covington – with 7,500 proposed residential units, the biggest single housing project in Baltimore’s history – is going to be excluded from this requirement should come as no surprise. (The exemption was not publicly announced, but rather revealed on page 46 of this week’s Board of Estimates agenda.)

The Inclusionary Housing program is weak and has never been improved, despite years of criticism from housing advocates and occasional hand-wringing by the program’s board.

As Lauren Siegel of City Advocates in Solidarity with the Homeless (CASH) put it, “City leadership has had every opportunity since the last debacle at Harbor Point to change the ordinance or the regulations. An Inclusionary Housing Advisory group has been meeting and made many recommendations last year to the IH Board, which responded by saying that they do not have the capacity to make changes.”

The City Council’s response to the program’s inadequacies has been to establish a 13-member Inclusionary Housing Task Force dominated by the same city officials who let the program lapse.

The group has met once, with a second meeting postponed until after the primary elections. According to its chair, Councilman Bill Henry, “The work group is trying to coalesce the various conversations that have taken place between individuals and groups trying to develop a set of consensus changes that we can propose as legislation to the Council.”

In the meantime, the program grows weaker by the month.

Starting with $2 million in cash, the IH program has just $70,000 left in its coffers, according to its latest report to the Council.

Because the fund is barely solvent, Mayor Stephanie Rawlings-Blake is set to sign a Memorandum of Understanding tomorrow with Plank’s Sagamore Development Co. that opens the possibility of some inclusionary housing financed by state and federal programs, which Plank says he favors.

Siegel and Jeff Singer, retired president of Health Care for the Homeless, said the MOU reveals how the political rhetoric “about equity and inclusion” in the wake of last year’s Freddie Gray-related civil unrest “is just the same old smoke and mirrors.”

That little or no housing for residents in desperate need of affordable housing – over 58,000 people signed up for a chance to be randomly selected for Section 8 housing – may be the end result of tomorrow’s agreement is a travesty, Siegel and Singer said in a statement to The Brew. 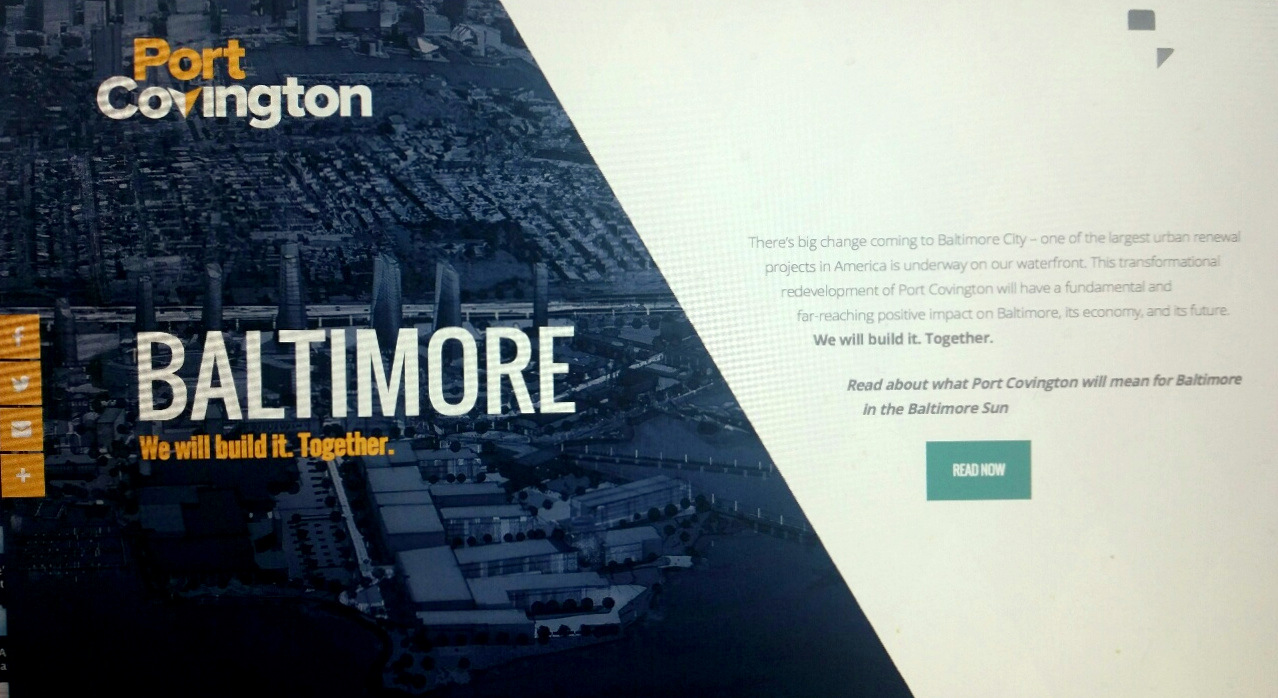 The tagline for Port Covington’s social media campaign for the $535 million TIF public subsidy is “We will build it. Together.” Wednesday’s MOU will confirm that not everyone will live in it. (buildportcovington.com)

“Baltimore’s Inclusionary Housing ordinance and regulations seem to have been written by Rube Goldberg emulating Franz Kafka,” they said. “As best we can tell, the goal of the ordinance is to make developer’s profits feasible, rather than to create housing affordable to our vulnerable neighbors.”

Three years ago, the program’s structural weakness was exposed when the $1 billion Harbor Point project was released from the requirement to set aside 20% for affordable housing in return for its $107 million in city TIF (tax increment financing) subsidies.

The same process that took place then is now repeating itself.

Once again, as he did with Harbor Point, Baltimore Housing Commissioner Paul Graziano has determined that the proposed $6.9 billion Port Covington project is “exempt from the requirement to create affordable housing under the IH Law.”

As a consequence, the Board of Estimates, controlled by Mayor Rawlings-Blake, will call on developer Kevin Plank tomorrow to voluntarily set a “goal” of 10% (as opposed to the law’s 20%) affordable housing if and when the developer is able to obtain housing credits from state and federal sources to pay for the units.

“If the publicly subsidized Affordable Housing Units cannot be constructed on a financially reasonable basis, Developer will contribute an amount to the Inclusionary Housing Fund,” the Board of Estimates agenda says.

The amount of Sagamore’s prospective contribution was not disclosed in this week’s agenda. But based on the past, the contribution will be made in the distant future and will be chock-full of loopholes. 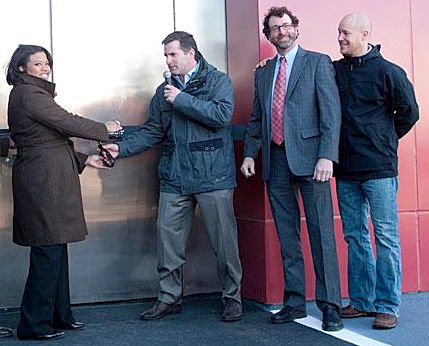 In the case of Harbor Point, for example, developer Michael Beatty agreed to contribute as much as $3 million to the IH fund when Harbor Point completes its projected build-out of 1,000 residential units.

So far, no residential units have been started. With the completion date for all of the units expected in the mid-2020s, Beatty’s contribution is about 10 years away. The current IH law is scheduled to “sunset,” or expire, on July 1, 2020.

In the meantime, Beatty has benefited from $35 million in city TIF financing, with a “phase II” slug of TIF funding expected in the near future.

Plank’s development company is seeking $535 million in TIF financing to pay for parks, bike paths, roadways and other infrastructure across 160 acres of former industrial land that Sagamore Development has purchased in Port Covington in South Baltimore.

In pursuit of his goals, Plank, the founder and CEO of Under Armour, has hired a number of local powerbrokers and influence peddlers to win approval of the TIF and other concessions from the city.

Among those hired by Sagamore Development is Michael Pokorny, manager of the city’s Inclusionary Housing Program from 2009 until he was hired by Plank last summer as Sagamore’s development manager.

Before that, Pokorny managed TIF and PILOT projects for the Baltimore Development Corporation (BDC).

Another alumni of the BDC, Caroline Paff, is now a vice president at Sagamore. Last month, the BDC formally recommended the $535 million TIF subsidy to Port Covington after a series of meetings closed to the press and public.

– Fern Shen contributed to this article. 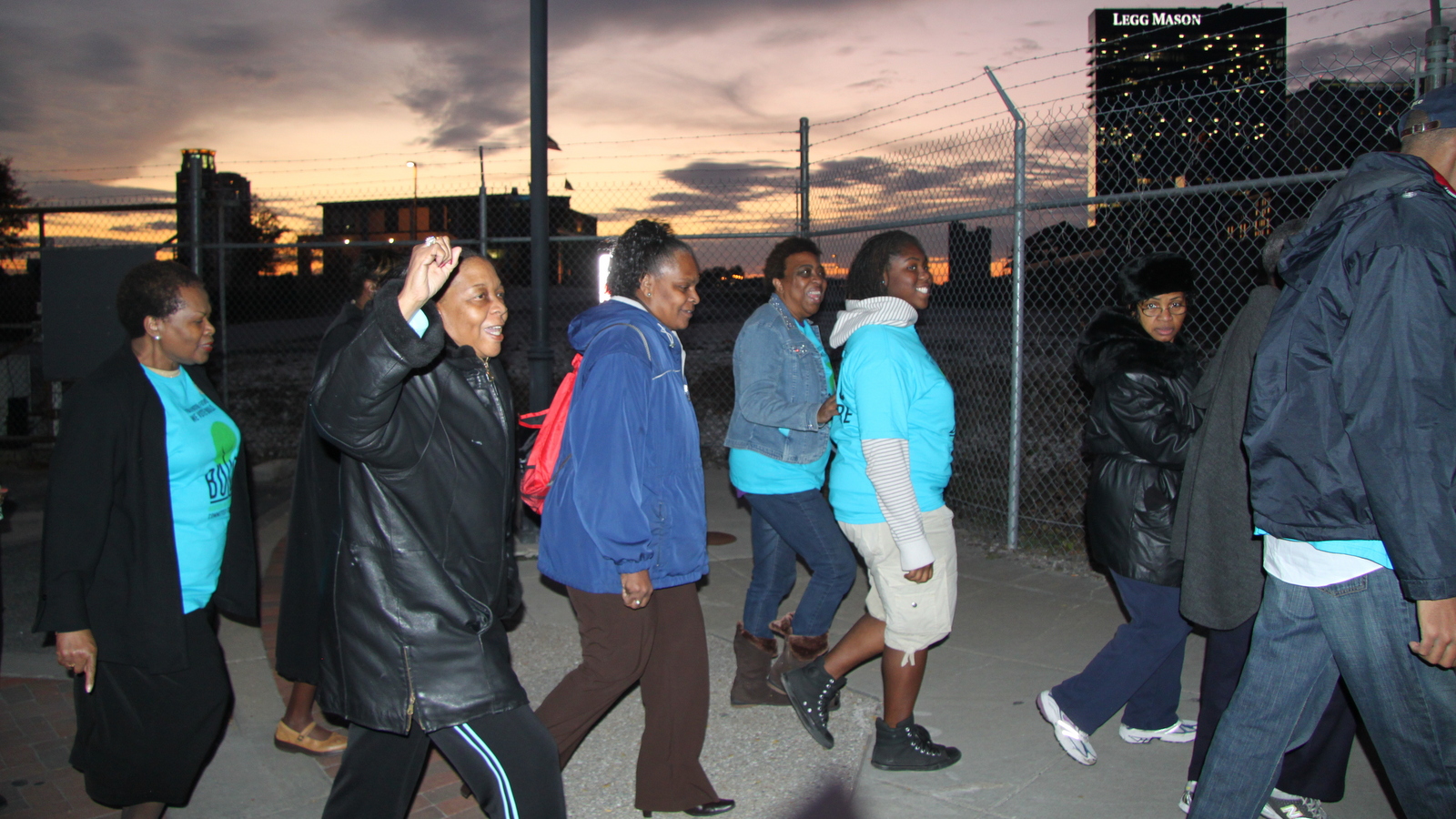 Members of BUILD (Baltimoreans United in Leadership Development) pass the future site of Harbor Point in 2011 on their way to protest city subsidies given to John Paterakis’ Harbor East development. (Fern Shen)