A year ago – carrying homemade signs and with faces raw with emotion – people poured into the streets of West Baltimore for what felt like spontaneous protests over the fatal arrest of one of their own.

Yesterday the crowd that assembled for a “Unity March” in remembrance of Freddie Gray appeared to be organized by a top-ranking police official, a megachurch pastor and a publicist from Bowie carrying a leopard print handbag.

Russell explained that Pastor Jamal H. Bryant, organizer of the event, wanted young people prominently displayed at the media staging spot at the intersection of Pennsylvania and North avenues. 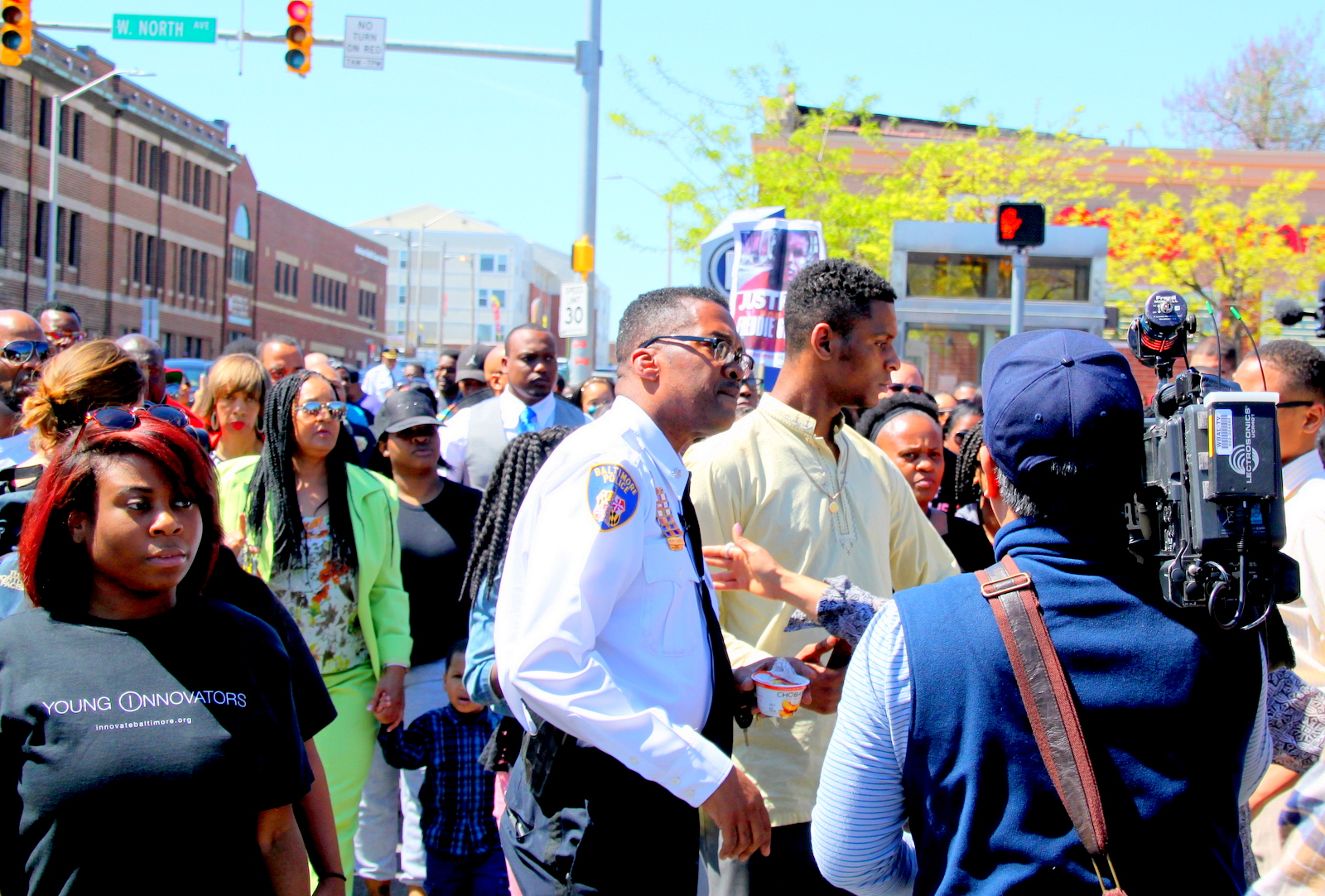 “Jamal wants everybody behind him. They want you guys on cameras so we can get started. Nobody’s going to see you if you’re back here,” Russell told them, eliciting some arched eyebrows.

“Hey, I’m just relaying a message from the pastor,” Russell said with a shrug.

“All of you who are over 18 and potty-trained, head over there,” another organizer said.

Held on the weekend before both the 2016 mayoral primary election and the anniversary of the Freddie Gray protests and riot, the march mingled many agendas and brought out a bevy of big names from Baltimore and beyond. 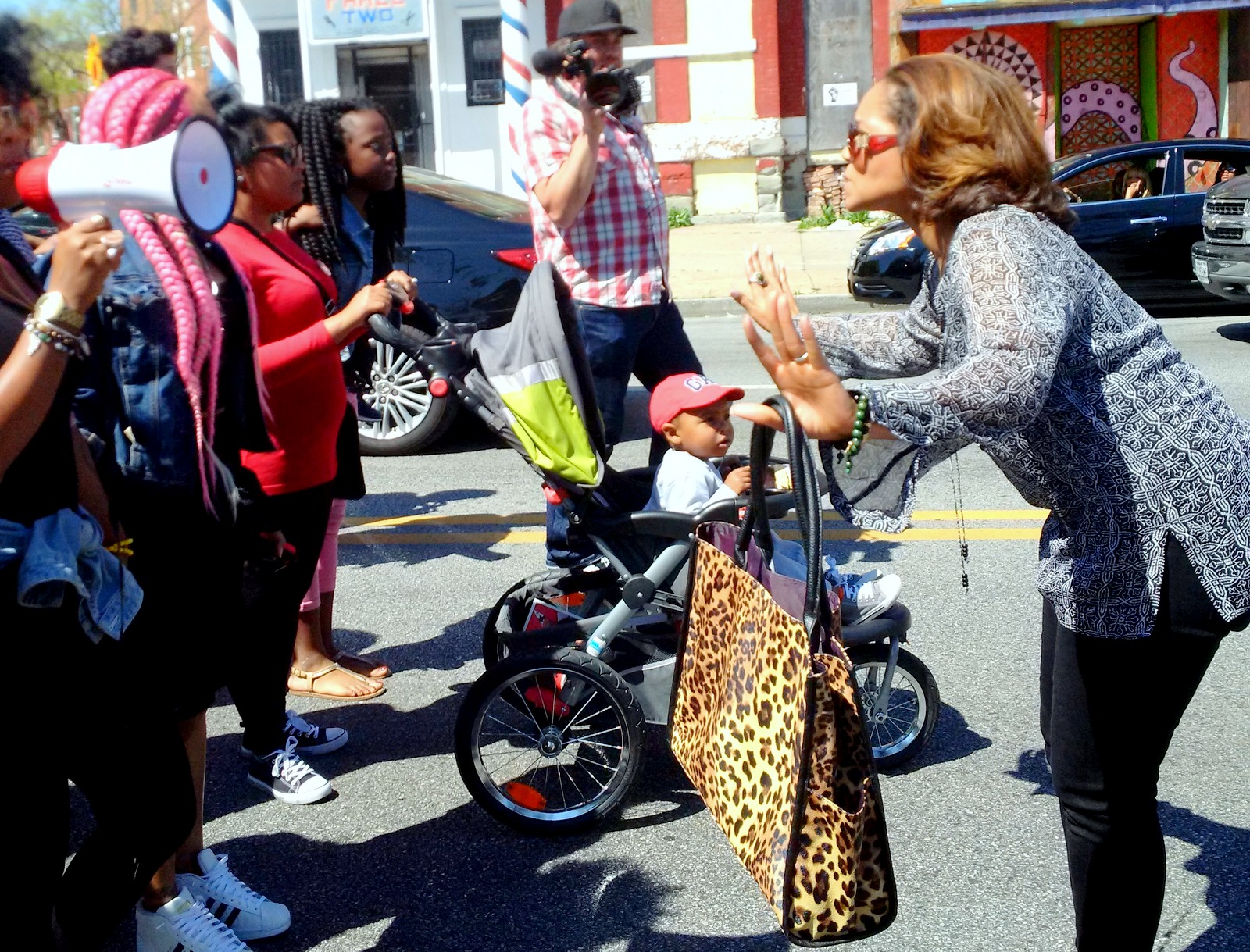 “The Wire” actress and activist Sonja Sohn was there, a film crew tagging behind her. So was former NAACP president and CEO Benjamin Jealous.

The two front-runners for mayor, Catherine E. Pugh and Sheila Dixon, each arrived with an entourage, causing a rush of TV cameras. Red-shirted Dixon volunteers seemed to be everywhere.

Buttonholing Pugh, Sandtown resident Leona Berry-Bova told her that people need help with basic education and skills. “People up in here need to learn to read and write or they’re never going to get anywhere,” Berry-Bova said.

“I developed a lot of programs around literacy. Let’s talk about that some time,” Pugh told her, turning away as actor Danny Glover appeared on the scene.

Berry-Bova told a reporter that she is a Dixon fan, but wanted to give Pugh a chance. “I been with Ms. Dixon from the age of 14 and I’m 44 now,” Berry-Bova said. “I’m living in one of the houses she gave me and my sister.” 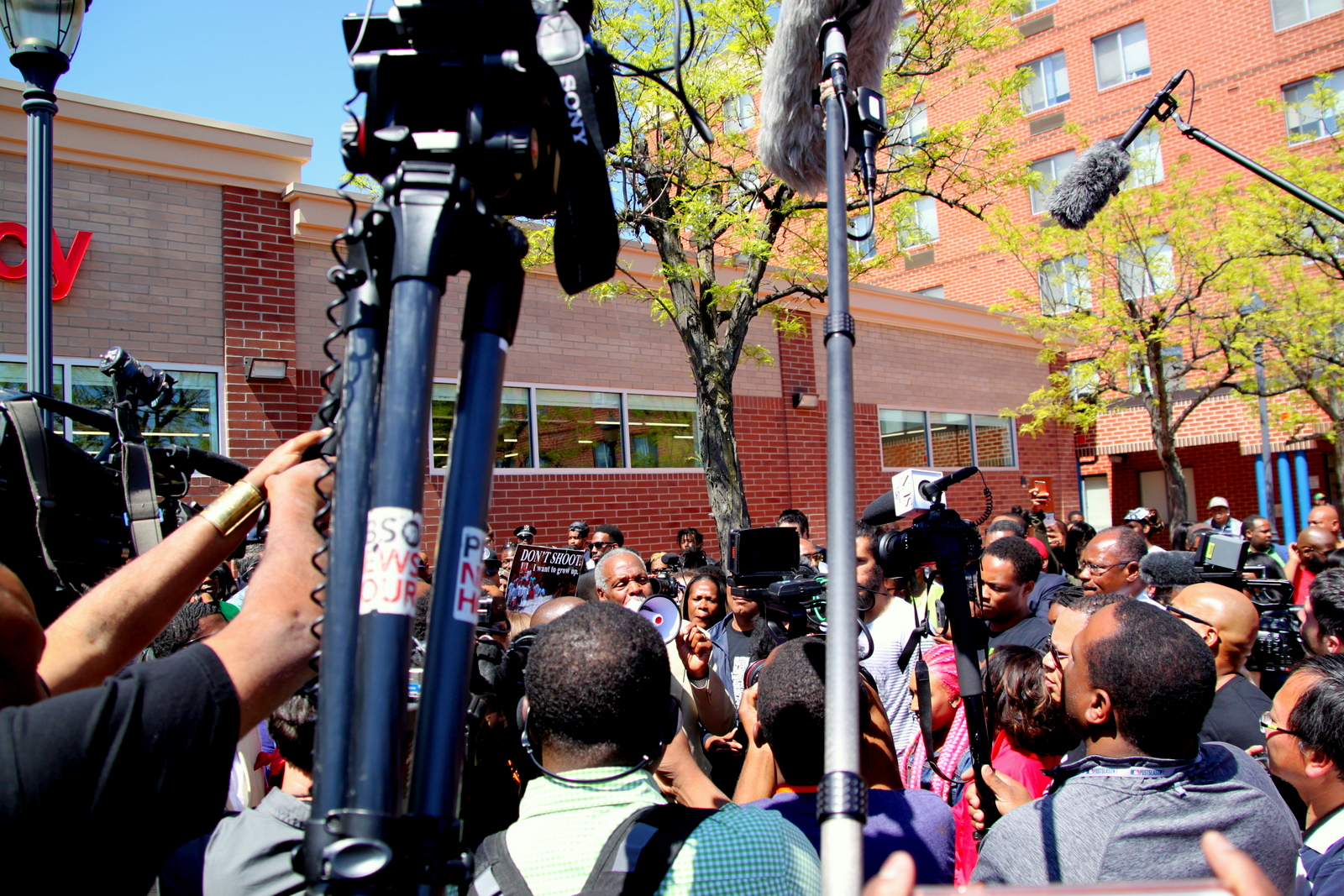 Glover also addressed the crowd, at one point offering the Martin Luther King quote, “Peace is not simply the absence of tension, but the presence of justice.” He was standing in front of the CVS drugstore that had been looted and set ablaze during the April 27, 2015 civil unrest and has since been rebuilt.

Pumped up by a Publicist

Eventually, it was time for the march to start. Taking charge was Nicole Kirby, the publicist at Bryant’s Empowerment Temple in Northwest Baltimore.

She positioned Pugh and Dixon on either side of Pastor Bryant, and the phalanx of VIPs began moving forward.

Adroitly, she stopped their advance so that the gaggle of photographers could get footage and photos. It was as if someone had hit the “pause” button. After weeks of rancorous campaigning against each other, Pugh and Dixon stood uneasily nearly side-by-side as their images were captured. 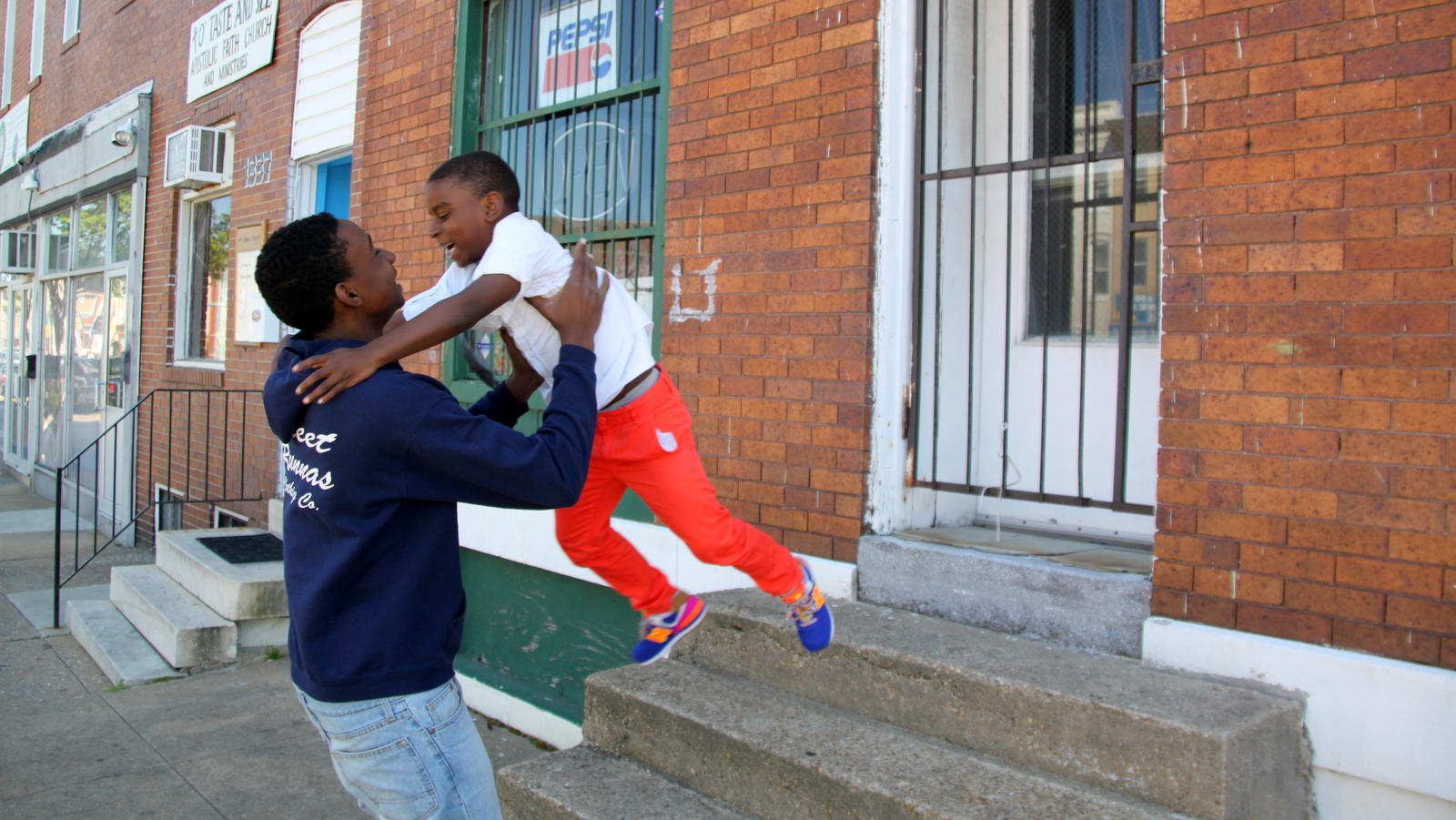 Along the march route, Malik Creighton, 6, leaps into the arms of his brother Brian Rice, 14. (Louie Krauss)

Then Kirby commenced the march. She positioned herself at the front of the line where the young people had been assembled. She led them in the chant (“One Baltimore! One vision!”) and demonstrated the excitement she wanted them to show, shooting her fist in the air and po-going up and down at one point. 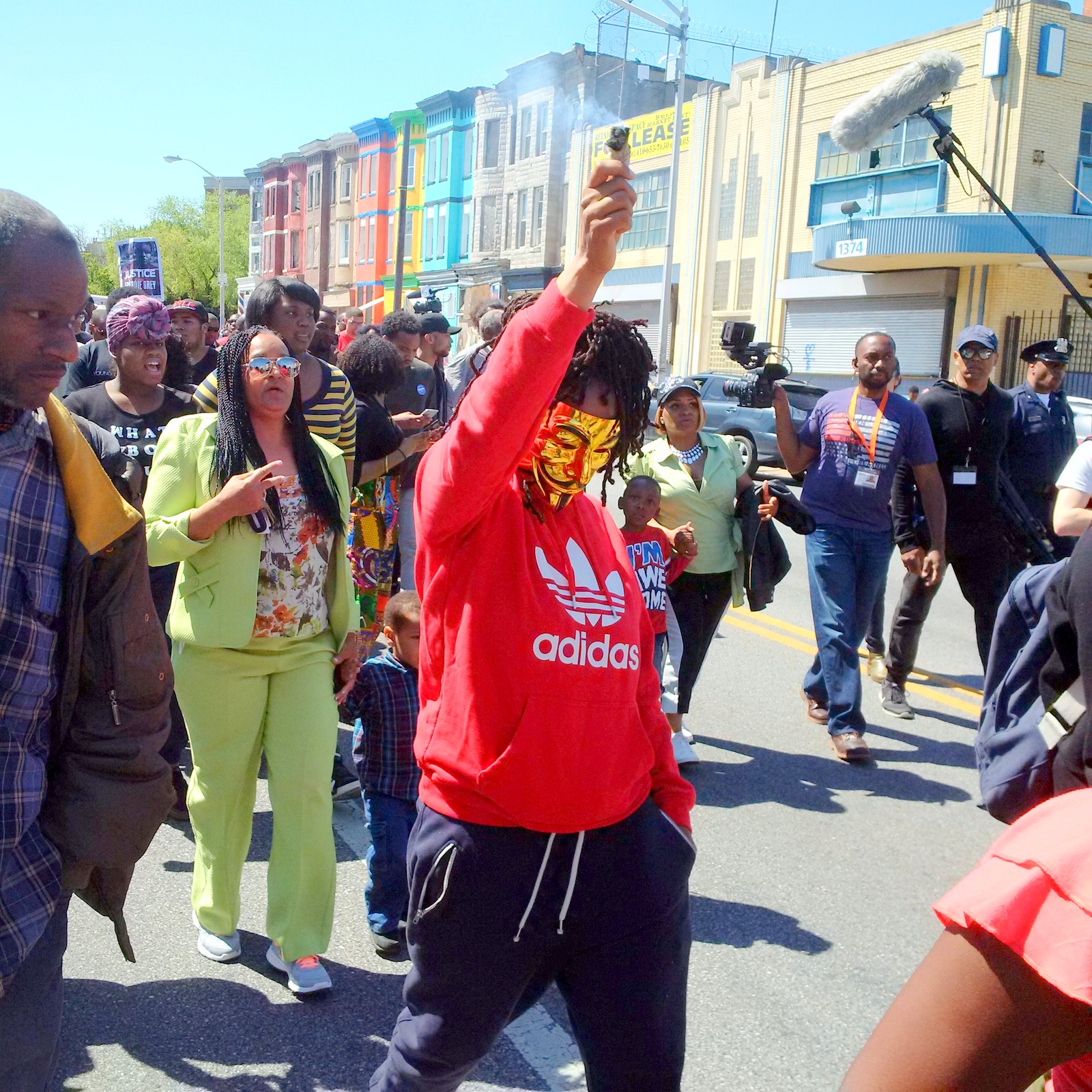 Walking along in the crowd – and running at one point to get to the front – was U.S. Senate candidate Chris Van Hollen.

Also weaving through the crowd was an aroma that many assumed to be marijuana.

The source? A young woman who eventually donned an “Anonymous” mask she was carrying. Whether it was a blunt the size of a polish sausage, or simply a smudge stick, she was waving it around as if it were ceremonial incense.