A dog was barking and a woman was yelling – not a promising moment for 13th District City Council candidate Shannon Sneed, who had just knocked on an East Baltimore rowhouse door.

But Sneed waited patiently on the porch without flinching. “Go! SIT DOWN!” a woman yelled to the dog as the door cracked open. “GO!”

Campaign literature in hand, Sneed began her pitch but the woman cut her off and explained that she already cast her vote – for Sneed – at an early voting site.

“You already have my support! I remember you!” she said, as the candidate thanked her and requested that she give the campaign literature to a neighbor.

Then it was on to the next house on North Decker Street for Sneed and volunteer Tai Johnson yesterday afternoon, as they scrounged for votes as the hours ticked down towards tomorrow’s 2016 primary election. 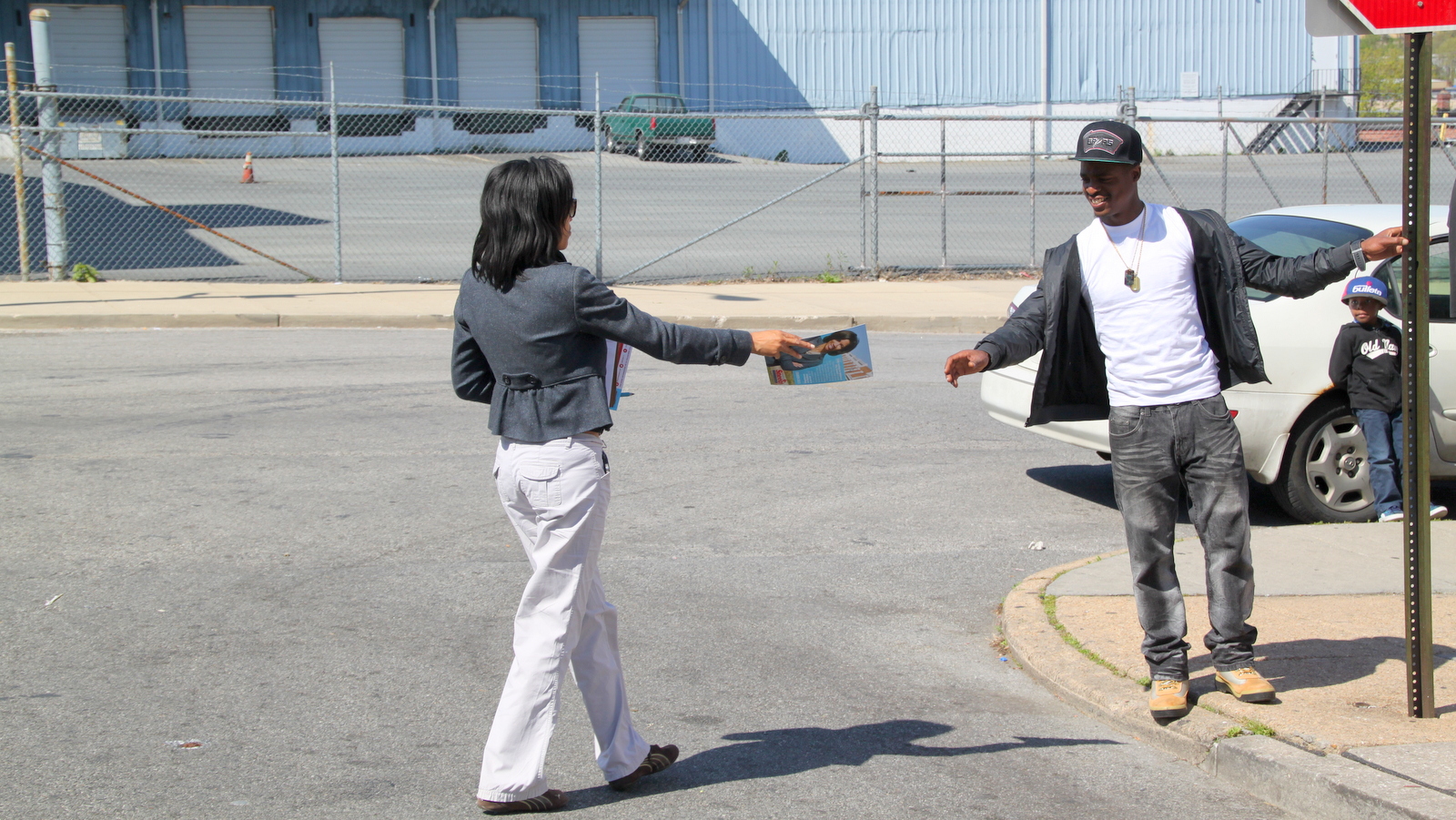 Sneed is leaving no stone unturned in her search for votes as she takes on incumbent Warren M. Branch, who beat her by 43 votes in 2011. This year her campaign has canvassed every eligible voter three times. By Sneed’s count, her and her team’s knuckles have knocked on district doors 12,000 times.

The 35-year-old, who works for Big Brothers, Big Sisters of the Greater Chesapeake, says she’s raised more money this time around. In the last election, Sneed  raised about $7,000 in all, compared to roughly $70,000 this time – enough to pay for four different mailings.

The other difference for this shoeleather campaign: it’s taking place in a year that promises unprecedented change city-wide on a Council where incumbents typically cling to their seats like barnacles for decades.

“It’s a presidential election year, so it could mean more turnout,” Sneed said, “and it just seems like it’s a very different year.”

Sneed’s challenge on the Eastside’s 13th is just one race where candidates are hoping to knock out an incumbent or beat competitors to a seat left open by a departing officeholder.

In Southeast Baltimore, a passel of well-funded candidates are hoping to succeed Councilman James B. Kraft, who is seeking a seat on the Circuit Court bench.

The waterfront 1st District has attracted candidates with six-figure campaign war chests and even fired the hopes of city Republicans after a majority of district voters pulled the lever for Larry Hogan in the 2014 governor’s race. Among the candidates in the Democratic primary are Zeke Cohen, Mark Edelson, Sean P. Flanagan, Edward Marcinko and Mark Parker.

In struggling West Baltimore, meanwhile, another vacant seat has set off a political feeding frenzy.

The area, where last April’s protests and rioting took place after the in-custody death of Freddie Gray, has been the recipient of unusual public attention since then – and promises of copious funding by private philanthropies and federal and state officials.

In another challenged area, the 8th District in far Southwest, the departure of 20-year veteran Councilwoman Helen Holton has drawn four candidates into the race led by community organizer Kristerfer Burnett and attorney Russell Neverdon.

And the vacancy of near-north’s 12th District by Carl Stokes (who is running for mayor) has left open another field for hopefuls. Among those jousting for his seat is Kelly Cross, president of the Old Goucher Community Association, and Stokes’ longtime aide, Robert Stokes Sr.

Will there be significant change in the Council even with new faces in place? Some of the candidates have strong ties to existing networks.

One hot race, for example, will fill the seat created by the retirement of  3rd District Councilman Robert W. Curran, a 20-year incumbent. One of the candidates in the race, Jermaine Jones, has, like Curran, been the recipient of significant union support and financial largess.

Likewise Councilwoman Rochelle “Rikki” Spector, who has represented Northwest’s 5th since 1977, is not running for re-election. But one leading candidate, Betsy Gardner, has both Spector’s endorsement and strong ties to City Council President Bernard C. “Jack” Young.

Gardner serves as the district’s neighborhood liaison for Young and is also his liaison to the area’s large Jewish community. She is up against six other candidates, including Christopher Ervin, Derrick Lennon, Isaac “Yitzy” Schleifer, and another municipal employee, assistant city solicitor Elizabeth Ryan Martinez.

In another example of interwoven political ties, Marshall Bell, the brother of former City Council President Lawrence Bell, is running for Mosby’s seat in the 7th. 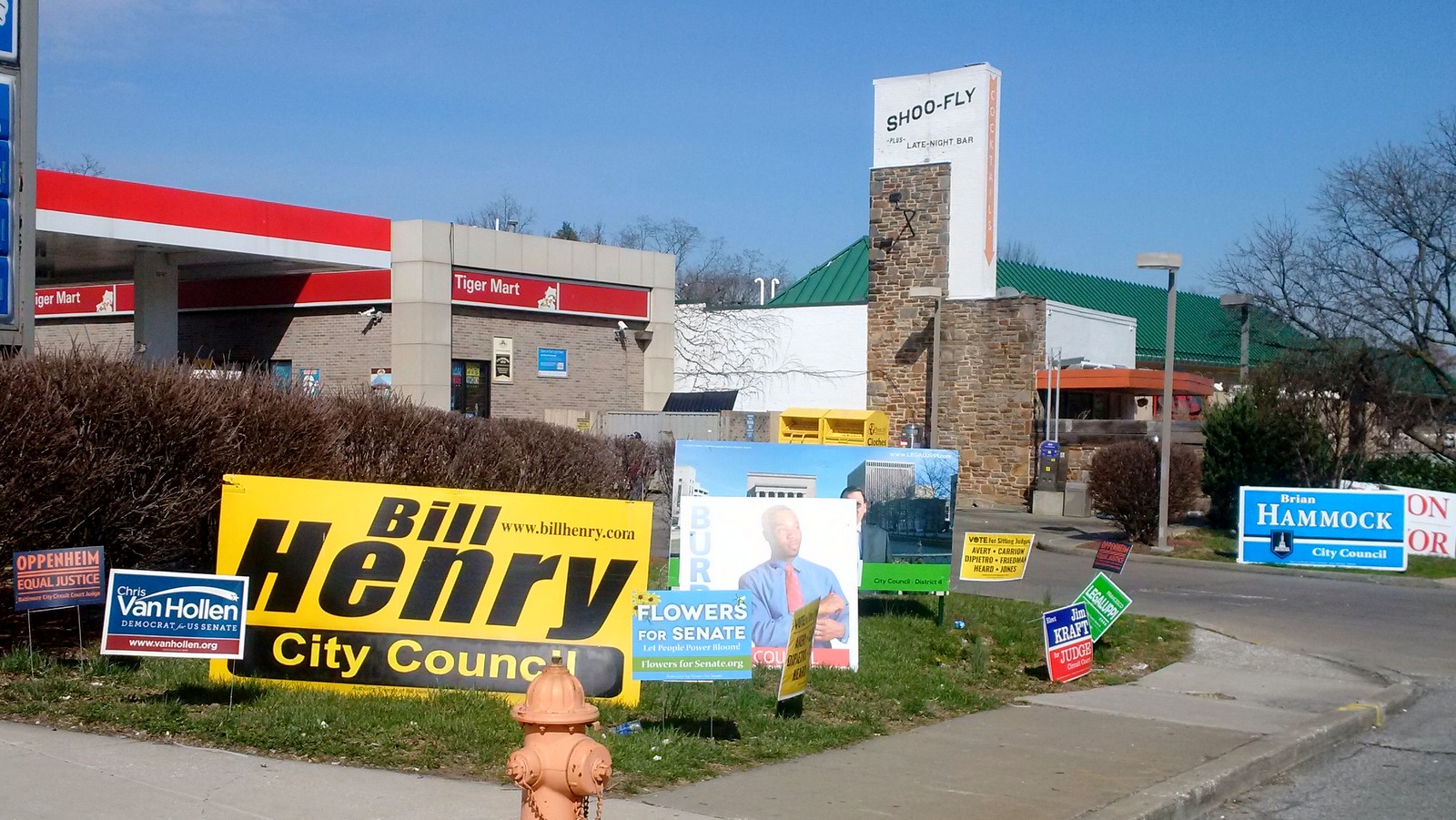 At the corner of York Road and Belvedere Avenue, a cluster of 2016 campaign signs. (Fern Shen)

In as many as seven of the districts, incumbents are likely to keep their jobs.

If 9th District Councilman William “Pete” Welch retains his seat against a split field of six challengers, he will continue a dynastic family rule that goes back decades. Welch was appointed by the Council to represent the West Baltimore district in 2010, replacing his mother, Agnes B. Welch, who held the job from 1983 until retiring in 2010.

Edward Reisinger, the 10th District’s representative who was elected in 1995, and Councilwoman Mary Pat Clarke, who took office in the 14th District in 1987,  are also hoping to retain their seats. Councilwoman Sharon Green Middleton, who has represented the 6th District since 2007, is facing the same Democrat she defeated in 2011.

Scott is a freshman legislator who has made a strong mark representing his Eastside district. He is opposed by Melissa Bagley and Tony Christian.

Costello, the controversial former president of the Federal Hill Neighborhood Association, was appointed to his downtown and South Baltimore seat when William H. Cole left to head the Baltimore Development Corporation (BDC). He is challenged by four candidates, including Locust Point community activist Greg Sileo.

In the 4th District, two-term Councilman Bill Henry faces some stiff, well-funded competition, including from a CSX vice president, Brian Hammock, who has garnered endorsements from prominent members of the Baltimore delegation in Annapolis.