Today’s news that the water quality of Baltimore Harbor is abysmal is hardly surprising.

For the third consecutive year, the harbor racked up an “F” in the Healthy Harbor Report Card released by the Waterfront Partnership and Blue Water Baltimore.

The harbor was given a 51, a grim grade even on a generous curve, while the overall Patapsco River tidal basin came in at 57.

Hundreds of water samples taken last year by Blue Water Baltimore volunteers were found to contain high levels of fecal bacteria, which can cause sickness if a person comes in contact with the water, and also too much nitrogen and chlorophyll, which contribute to algae blooms and can cause “dead zones” in waterways.

The most common source of fecal bacteria is untreated sewage. We recently wrote about how the Baltimore Department of Public Works releases tens of thousands – and sometimes millions – of gallons of untreated sewer water into the harbor whenever it rains hard.

What may be surprising, however, is how the babbling brooks of Baltimore County feed into the city’s problems.

For example, the tributaries of the Jones Falls that empty into Lake Roland, just north of the city line, were found by Blue Water Baltimore to contain high levels of fecal bacteria.

Streams unfit to wade in or swim include Ruxton Run and Roland Run, which gurgle past million-dollar mansions, as well as the upper Jones Falls that meanders westward through Greenspring Valley, with its headwaters near the Green Spring Valley Hunt Club.

These and other pollutant-laced streams, like Towson Run, flow into Lake Roland, a popular county park that attracts fishermen, canoeists and kayakers. The waters then tumble over a 19th-century dam for an eight-mile journey to the Inner Harbor, gathering more household chemicals and human waste from leaking sewer lines and urban runoff.

Today’s report gave the Jones Falls watershed a failing grade of 54, only slightly better than the harbor.

A bit above Jones Falls, with a grade of 63, was Gwynns Falls. 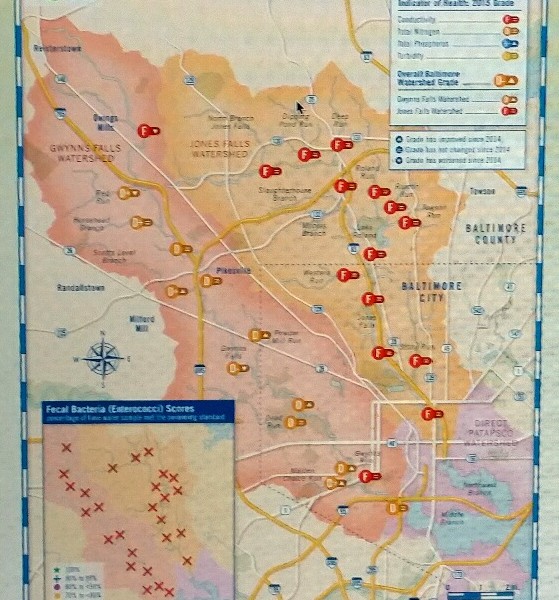 Jones Falls and Gwynns Falls are polluted long before they reach the city line, according to the water samples taken by Blue Water Baltimore. (2015 Healthy Harbor Report)

The watershed got “D” ratings for fecal bacteria from its headwaters near Reisterstown to the city line at Dickeyville, with an “F” at Owings Mills where many townhouse developments have risen in recent years and water quality has fallen.

While city waterways are afflicted with sanitary sewer outfalls and stormwater surges, county streams suffer from excess fertilizer (used on lawns and farm fields) that create the same unclean, unhealthy water that an estimated $800 million in sewage upgrades and enhanced treatment facilities over the last decade have yet to significantly improve.

Or stated differently, anglers in the upscale precincts of Riderwood and Ruxton have more in common with crabbers in Westport than they thought. 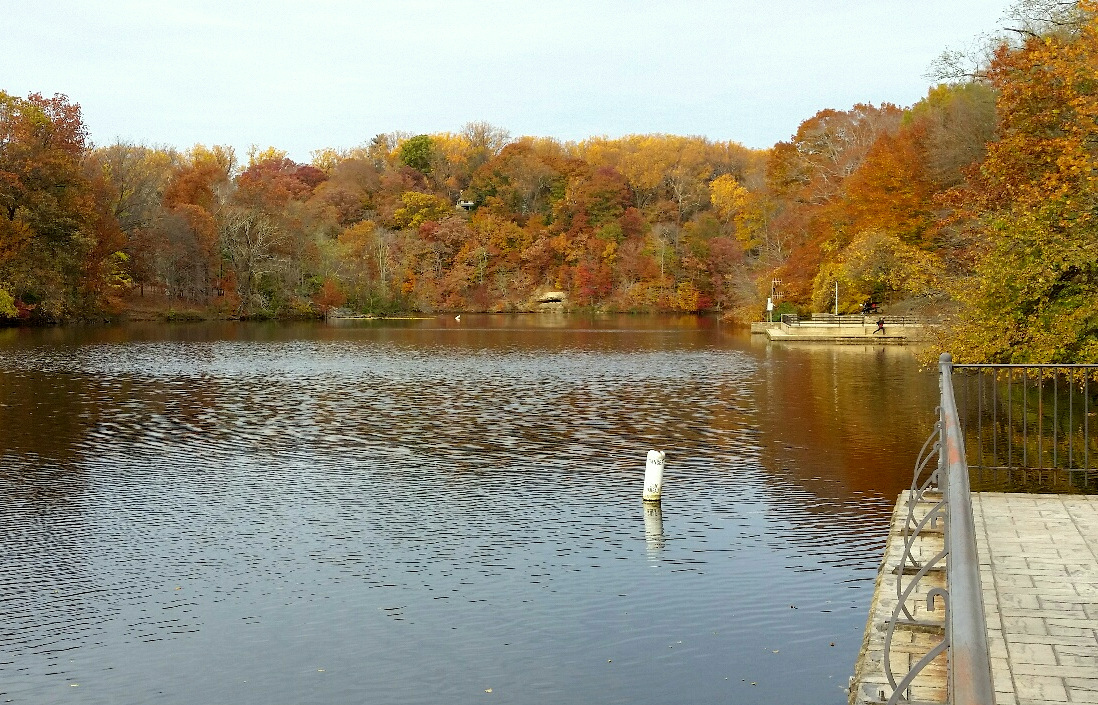 There was stunning fall foliage to view last October at Lake Roland, but the water was the same black murk found in Baltimore’s harbor. (Mark Reutter)