For a meeting that lasted just three minutes and was minus a mayor, the Baltimore Board of Estimates managed to spend a good bit of money yesterday.

It awarded nearly $7 million worth of contracts and grants, approved trips for seven officials (to Boston, Harrisburg, New York and Jackson Hole, Wyoming) and granted over $500,000 in extra work orders, settlements and contract increases.

The BOE is the epicenter of local government, the place where the public purse is spent in real time. Even though yesterday’s meeting did not allocate as many dollars as some BOE sessions do, the board’s spending habits offer a peephole into where city funds actually go.

They go, for example, to pay for a major hike for “windows and trusses cleaning services” at the Baltimore Convention Center.

The board authorized the Bureau of Purchases to triple the price of a contract it entered into with AAA National USA last July. Piggybacked on top of a smaller increase last November, the cost of window cleaning at the convention center has now rocketed from $61,970 (over the two-year life of the contract) to $195,970 .

In a note explaining the increase, the purchases bureau said that AAA National – which is based in Norcross, Georgia, and describes itself as “the preeminent building maintenance services company” – will do more work than anticipated under the original contract.

“Due to a demand for these services during the remainder of the current term, an increase is necessary,” the line item read.

Are windows suddenly becoming dirtier at the convention center for some reason?

The board’s fiscal watchdog, City Comptroller Joan M. Pratt, could have asked Timothy Krus, the city’s purchasing agent, who sits in the front row of the meeting.

The comptroller, however, let the price-tripling “informal increase” pass without comment. So did City Council President Bernard C. “Jack” Young.

The third  elected official on the board did not attend yesterday’s meeting. Mayor Stephanie Rawlings-Blake “is traveling,” a member of her staff said yesterday.

(Where to? “The West Coast.” How come? “On private business.” When will she return? “In a couple of days.” Who’s paying for it? “It’s not from city funds.” Later this month, the mayor is going to Las Vegas for a global shopping center conference and then will spend nearly a week in Cuba courtesy of the U.S. Conference of Mayors. Council President Young also plans to attend the RECon convention in Las Vegas.)

Going back to yesterday’s board meeting, about 30 contracts and awards that were approved by unanimous vote.

Among them was $1.4 million to buy bicycles and “related infrastructure expenses” for Charm City Bike Shares.

Two months ago, the board awarded $2.36 million to Montreal-based Bewegen Technologies to manage the program, which aims at placing about 500 bikes and 50 automated bike-share kiosks around the city for residents and tourists to use as a “sustainable” alternative to automobiles.

Yesterday’s fund transfer comes out of this earlier award, according to the city Department of Transportation. Another $58,000 was allocated last year for a bike share coordinator at DOT.

The anticipated launch of the program: Before Rawlings-Blake leaves office on December 5. 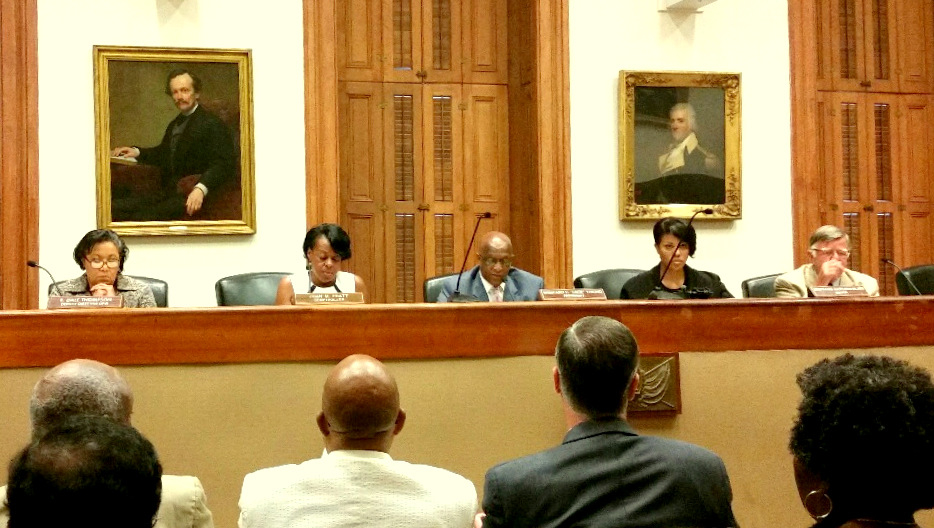 $$ for Clean Corps and Complete Streets

• $150,000 to the Baltimore Community Foundation to act as fiscal agent to the Clean Corps program. Clean Corps is described by its cosponsors, the departments of Planning and Public Works, as a “peer-to-peer, community-based social marketing program that motivates residents and youth to address litter trash issues within their community.”

Given that the program is currently set up to offer only $21,000 worth of grants ($1,000 each to 21 targeted neighborhoods) and to provide training sessions and “clean-up events,” the cost of its fiscal agent appears outsized.

But again, no questions were asked by the board, even though Public Works Director Rudy Chow sits on the panel.

“The budget includes the salary for the Clean Corps Coordinator, neighborhood grants, event activities, captain kit supplies, print materials, and there is $20,000 for the Clean Water Kids program in there as well. We also have more than 21 neighborhoods so money will be shifted to cover grants for all of the 25 participating neighborhoods. It definitely is a tight budget with majority of money going directly to on-the-ground community organizing work.”

• $165,930 to settle outstanding claims by JLN Construction Services over air-conditioning work it completed at the Benton Municipal Building and the Chick Webb Recreation Center.

JLN was also given additional settlement money as part of a separate $375,000 item, called the Community Center Master Plan Account, going to the Department of Recreation and Parks.

• $245,370 in EWOs (extra work orders) to Midasco LLC, which fixes traffic signals for DOT. This increase comes on top of $308,047 in  previous EWOs approved under the same contract.

• $30,000 to a woman who was badly injured when her car was struck by a police cruiser racing to the scene of a “Signal 13” (shots fired) emergency call on August 23, 2014. The crash, at Erdman and Parklawn avenues, totaled both vehicles and sent the woman to the emergency room.

• $139,393 to Whitman, Requardt & Associates to finish a “Complete Streets Plan” for the area surrounding Horseshoe Casino. This traffic study has gone through many iterations and delays since the casino was opened in August 2014. Over $600,000 was  previously allocated by the Casino Local Development Council (LDC) to complete the plan, but much of the contracted services and demonstration projects have yet to be performed.

• $1,042,018 to Whitman, Requardt & Associates to help the Department of Public Works, which is “in need of assistance” for managing and inspecting improvements to the Guilford Pumping Station. The consultant will be paid $521,000 a year for services rendered between now and May 2018.

• $2,313 for lame-duck Councilwoman Helen Holton to attend the National Association of Counties Western Interstate Region’s Conference in Jackson Hole, Wyo. Her three-day stay will be funded by her elected officials’ expense account.

• $825,000 to St. Vincent DePaul to landscape and improve the exterior of a former school building on North Mount Street. The building, owned by the city, is used by the non-profit as a temporary shelter for homeless families.

St. Vincent was also handed $105,586 to provide “housing assistance and support for 20 individuals” from December 2015 through November 2016. “The agreement is late because of a delay at the administrative level,” the Mayor’s Office of Human Services said in a footnote.

The Board of Estimates consists of five members. In addition to three elected officials (Rawlings-Blake, Pratt and Young), the panel includes City Solicitor George Nilson and Public Works Director Chow, who was represented yesterday by his deputy, S. Dale Thompson.