Like monarch butterflies flocking to the mountains of Mexico, the annual migration of city and state elected officials began in earnest over the weekend.

The upshot: while a Baltimore judge was announcing a verdict today in the racially-tinged trial of police officer Edward Nero, Maryland’s governor, Baltimore’s mayor and Baltimore’s prospective mayor (who represents the district where Freddie Gray was arrested) were in Vegas on a networking getaway with developers, builders and retailers.

For Maryland Gov. Larry Hogan, the trip capped a busy weekend. After making an appearance at a soggy Preakness on Saturday, Hogan flew to the desert resort and served as the featured guest last night at a $10,000-a-plate fundraiser at Caesars Palace where the party feasted on steaks and checks made payable to the Republican Governors Association.

Today Hogan is making an appearance at RECon on behalf of the state’s economic development team, and tonight he’s set to attend the Maryland Party at the Wynn Las Vegas Resort and Casino.

Widely known and relished in local real estate circles, the annual party brings hundreds of real estate professionals together with government officials who mingle at the Surrender Nightclub and Encore Beach Club, which is described in promotional literature as a “lush oasis” featuring three-tiered pools lighted by 120,000 LED lights with cabanas and bungalows.

The purpose of the festivities? To promote Maryland and the Baltimore region as excellent places to build shopping centers and other real estate ventures. 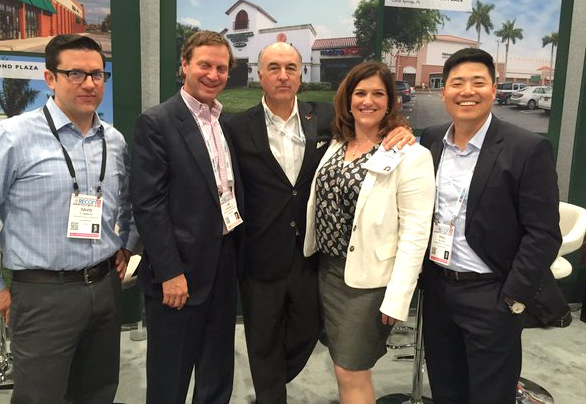 Also set to attend tonight’s party is West Baltimore’s state senator, Catherine E. Pugh, who is expected to be Baltimore’s next mayor after claiming victory in the Democratic primary last month.

She won’t be alone. The current mayor, Stephanie Rawlings-Blake, flew out to Las Vegas yesterday, accompanied by Deputy Mayor Colin Tarbert and a Baltimore police detective who serves as her security.

Young says his mission is to promote the city and to encourage retailers to locate supermarkets in Baltimore’s food “deserts,” while Stokes said the trip is useful for gaining insights into real estate trends in his capacity as chairman of the City Council’s Taxation, Finance and Economic Development Committee.

Others attending the meeting apparently have a different agenda.

Sagamore Development has applied for $660 million in overall TIF bonding (including reserve funds) from the city to make infrastructure improvements for Kevin Plank’s proposed “mini-city” at Port Covington.

The TIF legislation is now before Young’s City Council and Stokes’ taxation committee. Sagamore dispatched a seven-person contingent to the convention, according to on-line attendance records.

Other local companies with a prominent presence at the convention include the Cordish Companies, owners of Power Plant Live and the Maryland Live casino; H&S Development, developers of Harbor East; and Beatty Development Group, which earlier secured a $107 million TIF from the city.

For Baltimore taxpayers, the direct tab for this year’s trips will be in excess of $20,000, based on a partial disclosure of information provided to the Board of Estimates.

Jack Young’s office has submitted paperwork for $10,630 in reimbursements for himself, two members of his staff (Carolyn Blakeney and Michael Huber), and Councilman Stokes.

The mayor’s office has disclosed the cost of Rawlings-Blake’s and Tarbert’s plane ticket and allowance for meals ($1,554), but their hotel bills will be separately paid for by the BDC, which has not yet submitted invoices.

The BDC is also paying for Cole and three staff members (William Beckford, Kristin Dawson and Kristina Williams), which the city will then reimburse.

From Las Vegas, Rawlings-Blake will be headed to Havana this week on a trip sponsored by the Cuban government and paid for by the U.S. Conference of Mayors.

The trip’s purpose is to promote democracy in the Americas. Rawlings-Blake is scheduled to return to Baltimore over the Memorial Day weekend.