It was something that wasn’t supposed to happen – the use of taxpayer money to complete infrastructure improvements financed by Tax Increment (TIF) bonds.

That was what the Rawlings-Blake administration promised in 2013 when it pushed through a $107 million TIF for Michael Beatty’s Harbor Point project.

And it’s what the administration says now as it lobbies the City Council to ratify an unprecedented request for $535 million in TIF funding for Kevin Plank’s Port Covington.

But big cost overruns are happening at Harbor Point.

They simply have not been publicly disclosed.

The Brew’s requests to review documents pertaining to Harbor Point’s overruns – alluded to at a May 9 Board of Finance meeting – were rebuffed.

Steve Kraus, clerk of the board, described the written material handed to panel members (but then collected after the meeting) as “working documents” and says he cannot release them without the approval of the law department. The law department has not responded.

The documents, which The Brew has obtained by other means, show that “unanticipated” infrastructure costs, capitalized interest and financing charges at Harbor Point have ballooned by $29,314,000 since the project began three years ago.

Because of these rising costs, the city is planning to increase the second tranche of TIF bonds to $43 million (from the originally planned $14 million) to make it possible for Beatty Development to construct, without delay, a high-rise apartment called Point Street Apartments and a waterfront Canopy by Hilton hotel and office building.

The cost overruns include:

• $3.2 million for a new force-main sewer and pumping station to serve the Point Street Apartments and Canopy hotel that were not identified during the “value engineering” performed by consultants and was not part of the original Harbor Point Master Plan.

• $3.8 million for a bridge connecting Harbor Point to Central Avenue that originally was to be paid for by the Beatty group. The bridge was allocated $6.6 million in the first tranche of TIF bonds, but now needs nearly $4 million more.

• $9 million for enhancing the Central Plaza fronting the new Exelon Building with brick pavers and other aesthetic flourishes. Also to reimburse Beatty Development for “unforeseen conditions encountered while constructing the foundations for the streets and plaza,” according to an memo by MuniCap, the city’s financial advisor.

• $6.1 million to extend Wills Street south to the harbor, as recommended by Urban Design and Architecture Review Panel, that was not part of the original Harbor Point Master Plan.

Risks Taxpayers May Pay For

Because TIF bonds cannot be increased beyond an authorized $107 million net amount, the city is faced with either scaling back on a waterfront promenade and public park or “dipping into” general funds to complete the infrastructure.

This scenario was revealed by Deputy Mayor Colin Tarbert at a March 15 meeting with the Baltimore Development Corporation. Tarbert said the city likely “needs to dip into the general funds in order to complete the project,” according to the meeting minutes.

The minutes go on to say: “Harbor Point was referenced as an example where there are risks to not having enough TIF capacity.”

Tarbert’s statements were not for public consumption.

They were made at a closed meeting of the BDC’s Project Review and Oversight Committee, which was reviewing the $535 million Port Covington TIF request.

The Brew, Baltimore Business Journal and Baltimore Sun protested the closing of this meeting under the Maryland Open Meetings Act.

Last week, the Open Meetings Compliance Board ruled that the BDC had violated the law – and the agency posted the meeting’s minutes on its website that revealed the city’s thinking about using general funds to pay off the Harbor Point overruns.

Repeatedly, BDC President William Cole and other officials have said that the City Council needs to approve the full $535 million TIF package for Port Covington in order to secure state and federal funding.

He and others say the details of the infrastructure expenditures proposed by the developer would be examined more closely when the bonds are issued in future years.

The same urgency to approve TIF legislation was expressed when the Harbor Point TIF came before the City Council three years ago. Steve Kraus, Keenan Rice of MuniCap, and then-BDC president Brenda McKenzie all argued that the details would be worked out “in the future.”

The future has arrived, and the spread between the former estimates of Harbor Point’s bonding needs (“Projection No. 38”) and the current figures (“Projection No. 45”) was presented to the five-member Board of Finance, but not publicly disclosed: 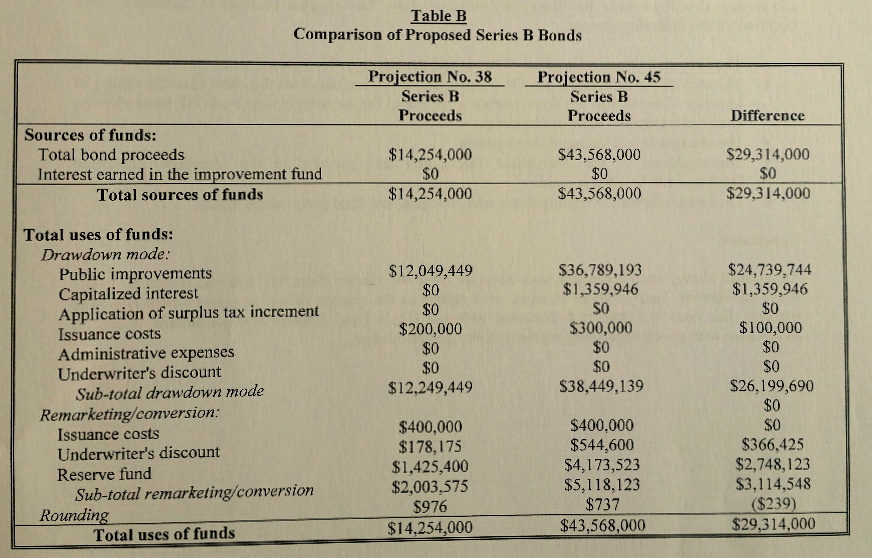 The board, consisting of Mayor Stephanie Rawlings-Blake (represented by chief-of-staff Kaliope Parthemos), Comptroller Joan Pratt and three citizen members (Fred W. Meier Jr., Dana C. Moulden and Larry I. Silverstein), delayed action on the TIF approval after the citizen members called for more information on an unrelated aspect of the issuance.

The board is expected to meet later this month to take up the Harbor Point bond issue.

Some Funds Already Going to Project

Taxpayers have already been tapped to pay for some infrastructure expenses at Harbor Point.

On March 23, the Board of Estimates approved $500,000 in Waste Water Utility Funds – which come from sewer revenues collected from city residents – to build a 1,000-foot sewer main from Harbor Point to the city’s trunk line at Aliceanna and Caroline streets.

The expenditure was described as “crucial to the development of the next phase of the Harbor Point project beyond the completion of the Exelon Building,” which uses an existing sewer line to the site.

On March 30, the board approved a $46.8 million design-build contract for reconstructing lower Central Avenue.

About $10 million will be used to construct the Central Avenue Bridge that will serve as a second north-south access road to Harbor Point, according to Adrienne Barnes, a spokesperson for the city transportation department.

In 2014, the city agreed to pay “all eligible costs” in excess of the $6.6 million in TIF funds allocated for the Central Avenue Bridge. (Baltimore DOT, via Maryland PIA Act)

Originally, the city said the bridge would be paid for in the first tranche of TIF bonds, but then it guaranteed, in a 2014 Memorandum of Understanding obtained by The Brew from a Public Information Act request, to pay for any additional costs of the bridge.

Those costs are now slated to be paid in the second tranche of TIF bonds.

The MOU on bridge construction came after the Rawlings-Blake administration amended its Transportation Improvement Program to reduce its “Bridge Replacement and Rehabilitation Fund” by $6.6 million in order to reallocate federal money to the Central Avenue Bridge and for improvements to lower Central Avenue that would serve Harbor Point and the expanded Harbor East projects of H&S Bakery magnate John Paterakis.