Hoping to dig her way out of a mountain of campaign debt, Catherine E. Pugh will be holding a fundraiser at the Baltimore Convention Center at the end of the month.

The June 29 event will feature private receptions between the Democratic Party nominee for mayor – who is the overwhelming favorite to win the November 8 general election – and donors based on the size of the checks they write, according to a flyer from Pugh’s  committee sent to prospective contributors.

The “Mayor’s Circle” of $6,000 payments (the legal maximum for a candidate in Maryland) will have the opportunity to meet with Pugh during the first hour of the event.

This will be followed by meet-and-greets between Pugh and the “Leadership Group” (contributions of at least $2,500) and “Friends of Catherine” (a minimum of $500 donations).

Send it to Sandy

Contributors are asked to mail their checks, prior to the event, to an address that is listed in state records as the address of Sandra S. “Sandy” Hillman.

Hillman heads a Towson public relations firm that represents, among others, Under Armour, Caesars Entertainment, Horseshoe Baltimore Casino and other heavy hitters.

She and her husband, Robert S. Hillman, a lawyer and former labor commissioner, were prominent members of the inner circle of ex-Mayor Williams Donald Schaefer.

They contributed $3,000 to Pugh’s mayoral primary and additional sums when Pugh ran for other offices.

The June 29 fundraiser comes at a time when the Committee to Elect Catherine E. Pugh is facing money problems despite raising at least $1.15 million in the primary, according to campaign filings with the Maryland Board of Elections.

Sources tell The Brew that Pugh, currently state Senator from Baltimore’s 40th District, recently confided to top supporters that her campaign is heavily in the red.

Her comments were made at a breakfast meeting at the Radisson Cross Keys Hotel, in which over 100 campaign supporters were invited and 50 or so attended. “She said the campaign has a lot of debt and she needs to clean it up,” a source told The Brew.

Responding to The Brew after this story was published, Pugh said, “Most campaigns have debt. In fact, I got calls from several campaigns to see if I can help them with their debt.” 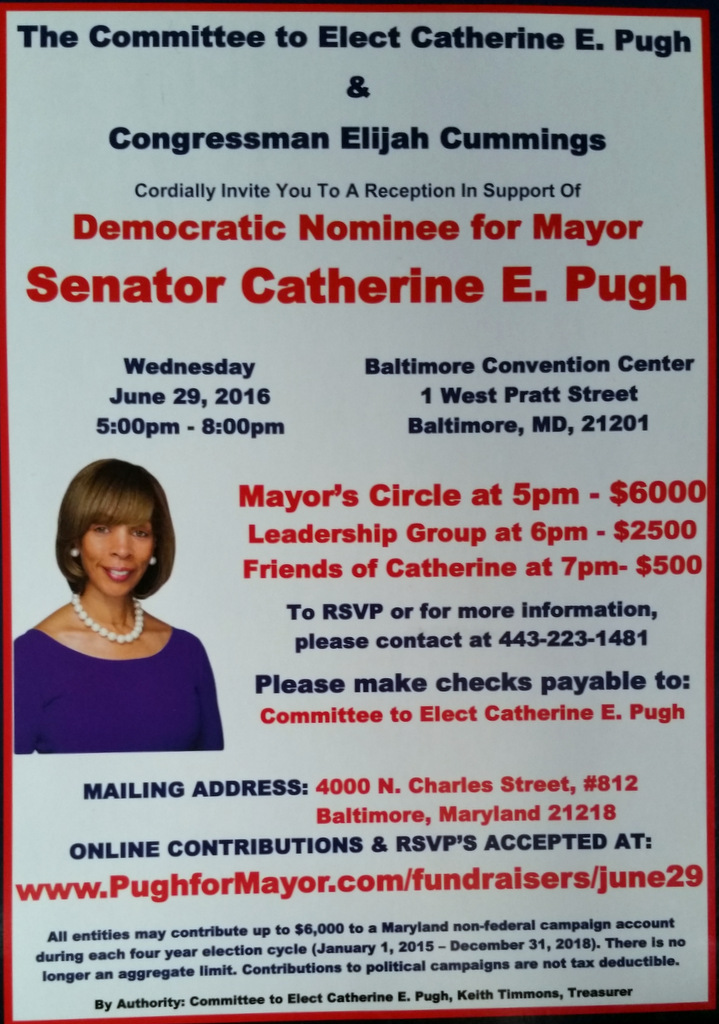 The Pugh fundraiser lists the campaign contributions expected by those who attend. (Committee to Elect Catherine E. Pugh)

When told that sources placed the debt at much more, Pugh said, “It could be more. I’m not sure of all the numbers.”

Keith Timmons, the campaign treasurer, did not respond to a request for comment left at his Mt. Vernon law office.

In the final weeks before the primary, Pugh secured several large loans, according to two independent sources, amounting to at least $100,000.

Because of their timing, the loans were not disclosed in her campaign’s primary reports (the final “pre-primary report” covered financial transactions ending on April 10, or two weeks before the primary).

The next report required by law is due at the end of August. If the loans are paid off before that time, they are likely not to be disclosed.

In addition to paying off loans to the campaign, Pugh needs money for staff members and some vendors who worked for her during the primary but agreed to deferred payments, sources said.

To cut costs, Pugh laid off her campaign staff shortly after the primary, when she declared herself winner of the Democratic primary following a close race with ex-Mayor Dixon.

To mount a campaign for the November general election, Pugh will need to hire a field staff, especially on election day, and will need money for campaign mailers and probable TV spots.