In the summer of 2013, the City Council was given a report by the Baltimore Development Corp. detailing how much infrastructure (roads, sewers, parks, etc.) would cost in order to convert the site of a former Allied Chemical factory to a sleek waterfront office-and-apartment complex envisioned by developer Michael Beatty.

One item was Central Square, a plaza in the middle of the development.

The estimated “hard” cost by  Rummel, Klepper & Kahl was $9.4 million, to which was added 60% for contingencies and other costs, making for a grand total of $15.9 million.

The RK&K numbers actually dated from 13 years earlier, August 31, 2000. They were revised six times, according to the report, before the full $15.9 million figure became part of the tax increment (TIF) bonding legislation that the City Council hurriedly approved in August 2013.

Today the city Board of Finance is scheduled to vote on Phase 2 TIF funding for Harbor Point.

At issue is whether to increase the authorized amount of TIF funding for Central Square to $24,831,356 – nearly three times the original hard cost – as part of a $36.8 million second bond offering.

Simply put, building infrastructure at Harbor Point has proven considerably more expensive than originally presented to the City Council and the public.

That, in turn, increases the probability that the next city administration will have to dip into general funds – coming from taxpayers – to complete the improvements promised to Beatty.

Already the Rawlings-Blake administration is doing some dipping, while at the same time pushing the Council to approve $660 million in TIF bonds for Kevin Plank’s proposed Port Covington project.

(NOTE: The Port Covington bond issue has been repeatedly presented as $535 million. That is the estimated net proceeds going for infrastructure building. The amount authorized in the City Council legislation is $660 million.)

Going back to Harbor Point, the mayoral-controlled Board of Estimates recently allocated $500,000 in wastewater utility funds, raised from residents’ water bills, to build a new “force main” sewer line for Harbor Point.

A new sewer pumping station for Harbor Point has been allotted $3,151,871 in the second series TIF funds – an expense not included in the RK&K engineering estimates of 2013.

The city is also planning to spend $10 million to erect a bridge connecting Harbor Point with Harbor East.

That amount is over and above the $10.3 million that’s coming from TIF bond money. 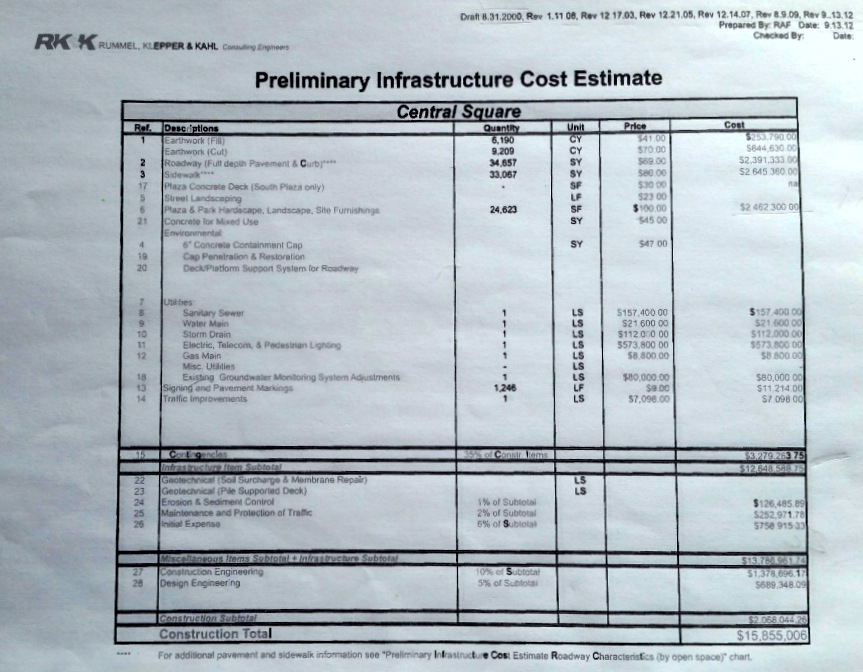 Original cost estimates for infrastructure at Central Square to be paid by the city. The amounts were prepared and updated by consultant RK&K between August 2000 and September 2012. (2013 Harbor Point TIF package)

In addition to the unanticipated costs of building a bridge and sinking pilings above the sealed cap of the former chemical factory, the city is pushing ahead with enhancements to Central Square that were not part of the original Master Plan.

One expense is for high-end granite pavers. The Brew requested from the Baltimore Development Corp. the cost of the pavers, which are currently being installed. The BDC has not gotten back with a figure.

UPDATE: BDC has disclosed the amount. It may surprise you: more than $1.1 million.

Last month, the revised allotment of Harbor Point bonds was revealed in spread sheets and a memorandum by MuniCap, the city’s TIF advisor, at a Board of Finance meeting.

The material was collected at the end of the meeting and not made available to The Brew or other media. Steve Kraus, deputy finance director, described the material as “working documents.”

His office and the city Law Department have not released the MuniCap material (which The Brew obtained through other means).

At the May 9 Finance Board meeting, Kraus also asked the panel to authorize the $36.8 million in TIF funds to pay for the added costs of Central Square, the Central Avenue Bridge, the new pump station and an extended roadway.

WHAT IS THE BOARD OF FINANCE?

It is a little-known public body that has a large impact on Baltimore’s financial health. Under the City Charter, the five-member panel is charged with authorizing and reviewing all city bond issues and other indebtedness. It consists of three citizen members appointed by the City Council, the mayor, and the city comptroller.

The citizen members expressed concern about another spread sheet by MuniCap that indicated that the first completed building at Harbor Point – the Thames Street Wharf occupied by Morgan Stanley – yielded 40% profits to its investors and developer.

“So in this case there’s a $95 million project here, and we have a total of $37 million in profit,” said Silverstein. “That’s high.”

MuniCap’s Keenan Rice responded by saying, “If someone is going to invest $70 million in a $95 million building and that money’s going to be invested for four years, they’re going to require that they be paid for the risk they’re taking and the money they’re putting up.”

“Is there some sort of governor on the interest rate for the equity investor?” Silverstein asked.

“How risky can it be to build a building for Morgan Stanley?” asked board member Fred Meier. 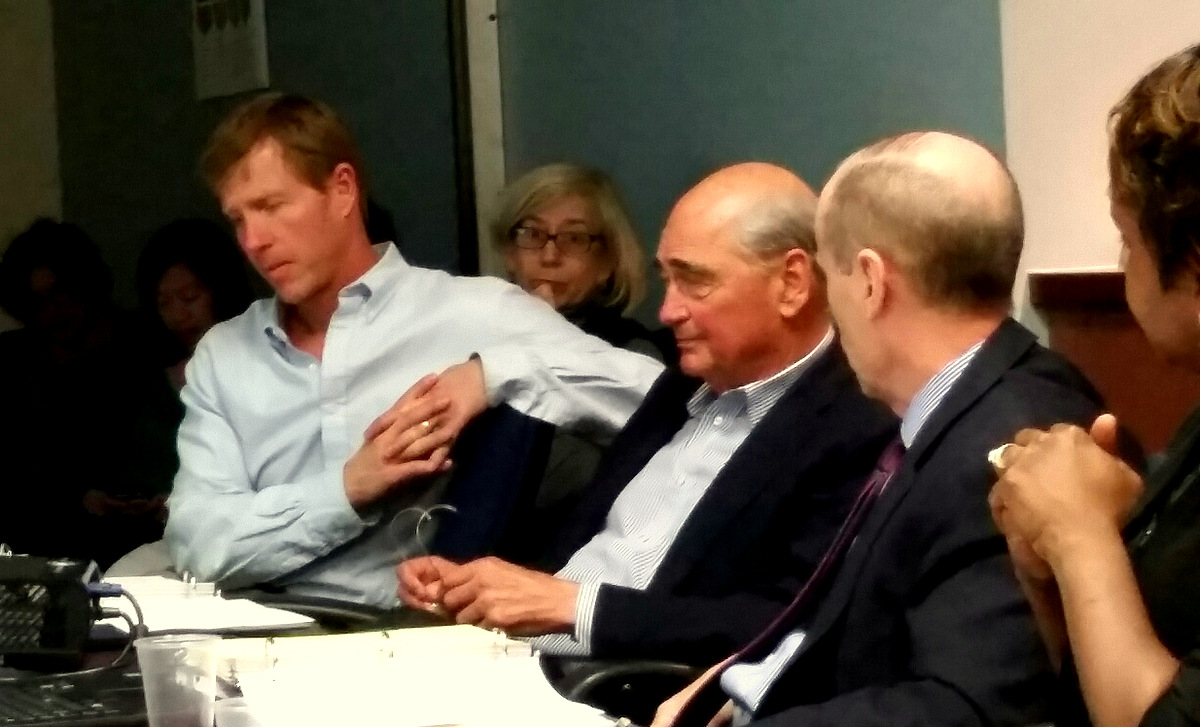 “Hold on a second,” said Kraus, who serves as the board’s clerk.

“We have environmental issues. There was nothing in the ground when these projects started. This is probably one of the most risky types of development that an equity investor can put their money into. You can’t expect them to do it for nothing.”

“We need to know what the building sold for,” Moulden told Kraus and Rice.

“I would like to see in the future that the developer’s profit is 12% in this type of deal where the city subsidizes so much,” added Silverstein.

The board recessed without taking action on the Phase 2 TIF bond request.

The matter of approving those Harbor Point bonds will be taken up at a special meeting today, Kraus told The Brew. 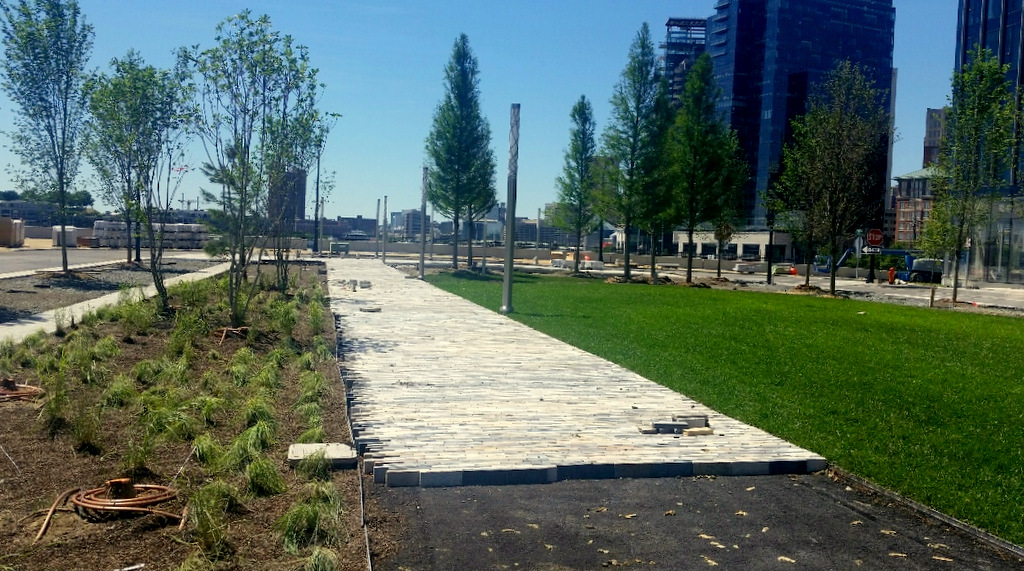 Another view of the paving and landscaping work now underway at Central Square. (Mark Reutter)