From day one, the bid by Under Armour CEO Kevin Plank to win city approval of $660 million in tax increment bond money (TIFs) to develop a 260-acre spread he controls at Port Covington has been clouded in controversy and confusion.

In TV ads and on social media, Plank’s publicity machine has portrayed the project as “manna from heaven” – a once-in-a-lifetime opportunity to attract the “creative class” to Baltimore, uplift the poor in surrounding neighborhoods and not cost taxpayers a dime.

According to this scenario, the sportswear magnate’s indomitable spirit will make possible a 30-year cycle of construction needed to erect a mini-city of soaring apartment towers and sprawling office complexes – even though by the time year 2046 rolls around, Plank will be in his 70s.

Describing the project as “incredibly risky,” Plank advisor Steve Siegel says, “You’d be hard pressed to find another developer that could do this.”

That’s a strange remark given that Plank’s real estate arm, Sagamore Development Co., is a virgin among builders, established 2½ years ago and still minus a website.

And Siegel’s statement glides past the question that Baltimore citizens and taxpayers are trying to answer: what exactly is the public risk? 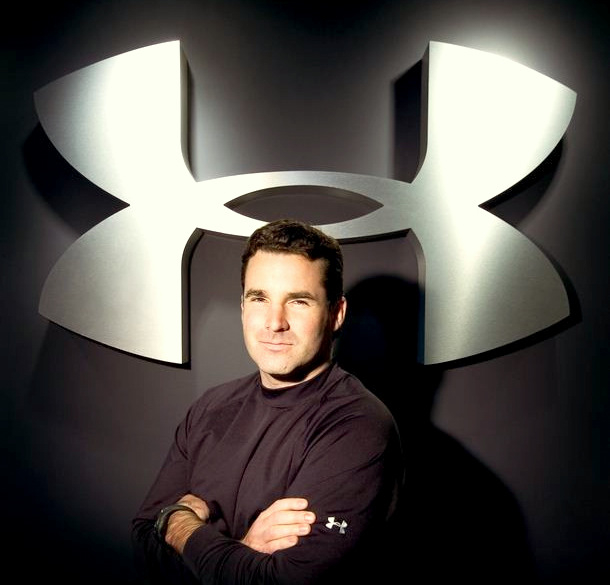 Kevin Plank is the founder, CEO and controlling stockholder of Under Armour. Sagamore Development was formed by Plank in 2013 as the real estate arm of his private holding company, Plank Industries. (celebritynetwork.com)

In its formal application requesting TIF financing from the city, Sagamore makes these assertions:

• By the 2040s, the project will be home for over 25,000 jobs. Of these, as many as 10,000 will come from the expected growth of Under Armour. The other job estimate comes from an industry formula that assumes that 226 square feet of new construction equals one job.

• The project will attract $2.6 billion to $5.5 billion in private investment (the amount varies in different statements).

• Up to 12,073 people will flock to 5,329 residential units clustered in high-rise buildings designed by renowned architects. The new housing has already been exempted from Baltimore’s Inclusionary Housing Law.

• 1.4 million square feet of retail, hotel and restaurant space will be offered. This would include a Disneyland-like entertainment district on rebuilt piers and an “urban playground under I-95.”

• The project will be “a catalyst for ecological uplift” with reconstructed wetlands and micro-bioretention systems.

• It will boost the fortunes of Cherry Hill and other predominately-black, low-income communities by offering temporary construction and permanent jobs.

• Over the next 41 years, the project will net the city $1.8 billion in tax revenues, the bulk of the revenues coming after year 2045.

What makes the project controversial is the unprecedented amount of public funds that Sagamore Development Co. seeks from city, state and federal sources.

• $660 million of TIF bonds from Baltimore to underwrite “horizontal” infrastructure. This would include not just nuts-and-bolts infrastructure such as roads, sewer lines and sidewalks, but such bells-and-whistle enhancements as a trolley line circulating through the development, public plaza surrounding a hydrothermal (heated) lake, a pedestrian swing bridge over the Middle Branch, and a total of 10 parks and plazas.

• $185 million from the state to improve the ramps and roads connecting Port Covington to I-95 and for a new connecting road from I-295 (the Baltimore-Washington Parkway) to the site.

• $165 million more from the state to build a 1½-mile spur of Baltimore’s Light Rail line, with two station stops.

• $224 million in matching federal aid for the highway improvements listed above. (Earlier this month, the U.S. Department of Transportation turned down Sagamore’s opening bid for $81 million of FASTLANE grant money. This rejection puts on hold – and perhaps in jeopardy – the company’s hope for federal aid for better highway access to the site.)

These subsidies and grants total over $1.2 billion. That figure does not include the interest payments that will be due on the TIF bonds, which will amount to another $1 billion over the 30-year life of the bonds. 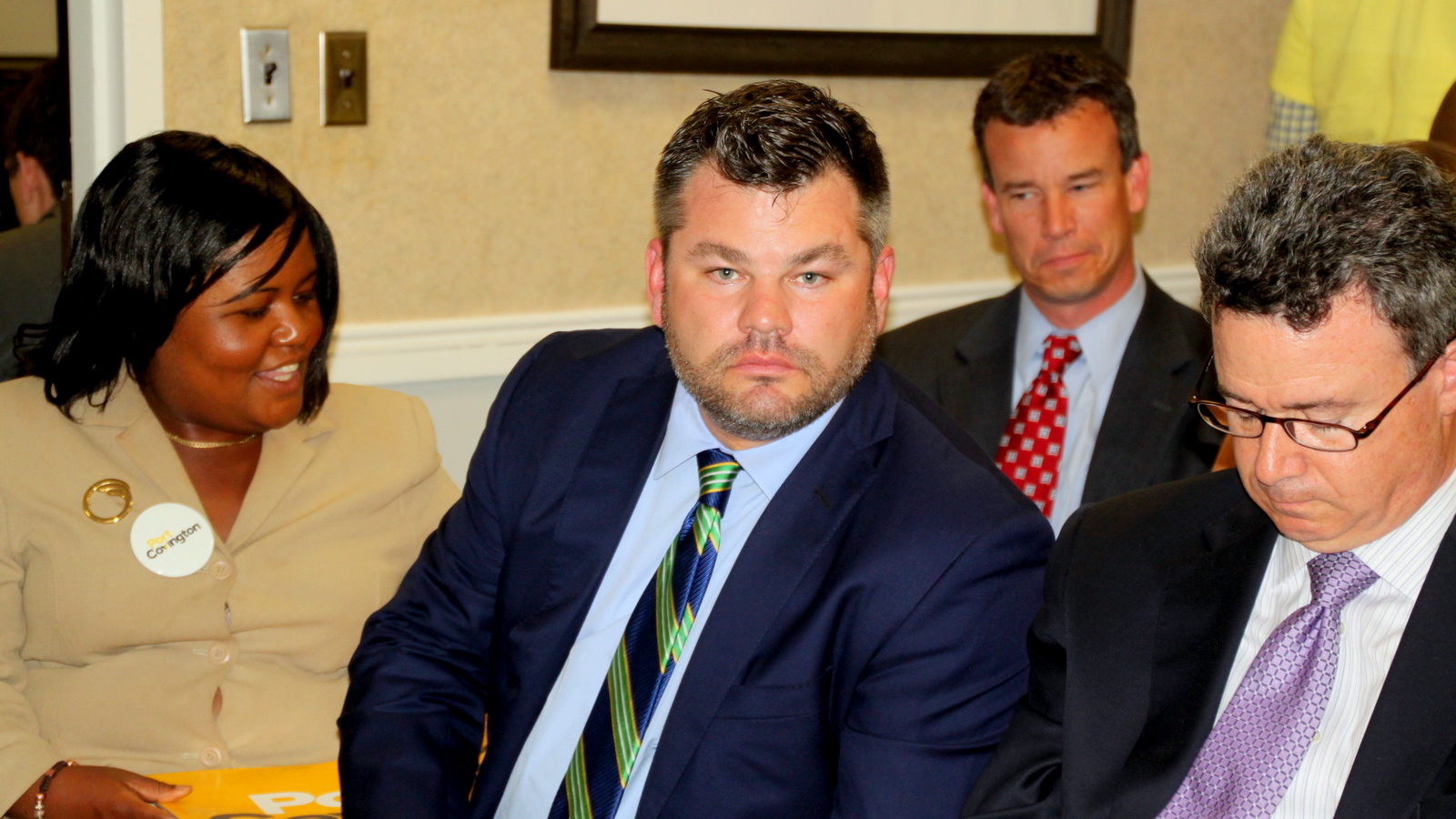 Controversy has grown over the timing of the TIF bonds. “The city is putting up the first dollar, even before the developer. We’re the ones paying for the remediation, paying for the infrastructure,” points out Councilman Carl Stokes, who will chair tomorrow’s hearing.

If the public costs are “front loaded,” many of the public benefits, such as higher property tax revenues and permanent jobs, will not materialize for many years.

In that space of time, warns Carson Bise, a well-regarded economic analyst in a report released last week by BUILD, all sorts of things can happen, including an economic recession that could dry up the private money for Port Covington and leave the interest and principal payments due on the TIF bonds in the hands of city taxpayers.

And even if the project remained on even keel, BUILD and others have raised the question of whether the Port Covington TIF would siphon money away from other city neighborhoods and projects for years to come.

Sagamore says “no,” arguing that the project would rejuvenate the local economy and create much-needed jobs. But the TIF they have requested is so large that it would push the city beyond the 4% debt ceiling that Moody’s and other credit rating agencies deem a prudent maximum.

Faced with a possible downgrade of city securities, which would result in higher financing costs, the Rawlings-Blake administration is seeking a third party, most likely the Maryland Economic Development Corp., to issue the bonds.

With MEDCO as the issuer of record, the TIF bonds would not be considered city debt and would not be on the city’s debt profile. Or at least that’s the case under current “generally acceptable” accounting rules that Deputy Finance Director Steve Kraus acknowledges could change in the future.

Whether or not its name is on the bonds, Baltimore City will be responsible for administering the TIF tax district set up at Port Covington and will handle future payments to bondholders. Before discussing the risks to the city, it is important to clear away a major misconception.

Namely the statement by Sagamore President Marc Weller – repeatedly echoed by supporters of the project – that “there are no tax breaks for developers involved; there are no subsidies; there are no handouts.”

This assertion is incorrect based on his company’s own Tax Increment Financing Application to the city.

The May 23, 2016 document says that “in order to execute the current vision, a substantial public investment must be made” and goes on to note (on page 541) that without TIF bonds, Plank’s real estate company would lose $132,500,302 on Port Covington.

So clearly the TIF financing package is of great value for Plank.

What’s more, it is not the only public subsidy mixed into the project. There will also be tax breaks (euphemistically known as “tax credits”) granted by the State of Maryland.

A projected $313 million in “EZ” (Enterprise Zone) credits and $445 million in Brownfield credits will be available to developers from the state. That makes for a total of $758,517,531 in tax credits, according to the financing application (page 35).

Despite the company’s snappy slogan “We will build it. Together,” Sagamore does not plan to build the “vertical” components (i.e., the office, retail and apartment structures) except for the Under Armour campus.

Dozens of building parcels (there is no specific estimate) will be offered to other developers, who will buy the land from Sagamore once it is improved with TIF-financed infrastructure.

While a tidy sum, that figure appears to be a low-ball number given that the city is providing more than $500 million in infrastructure investment that would enhance the land’s value. 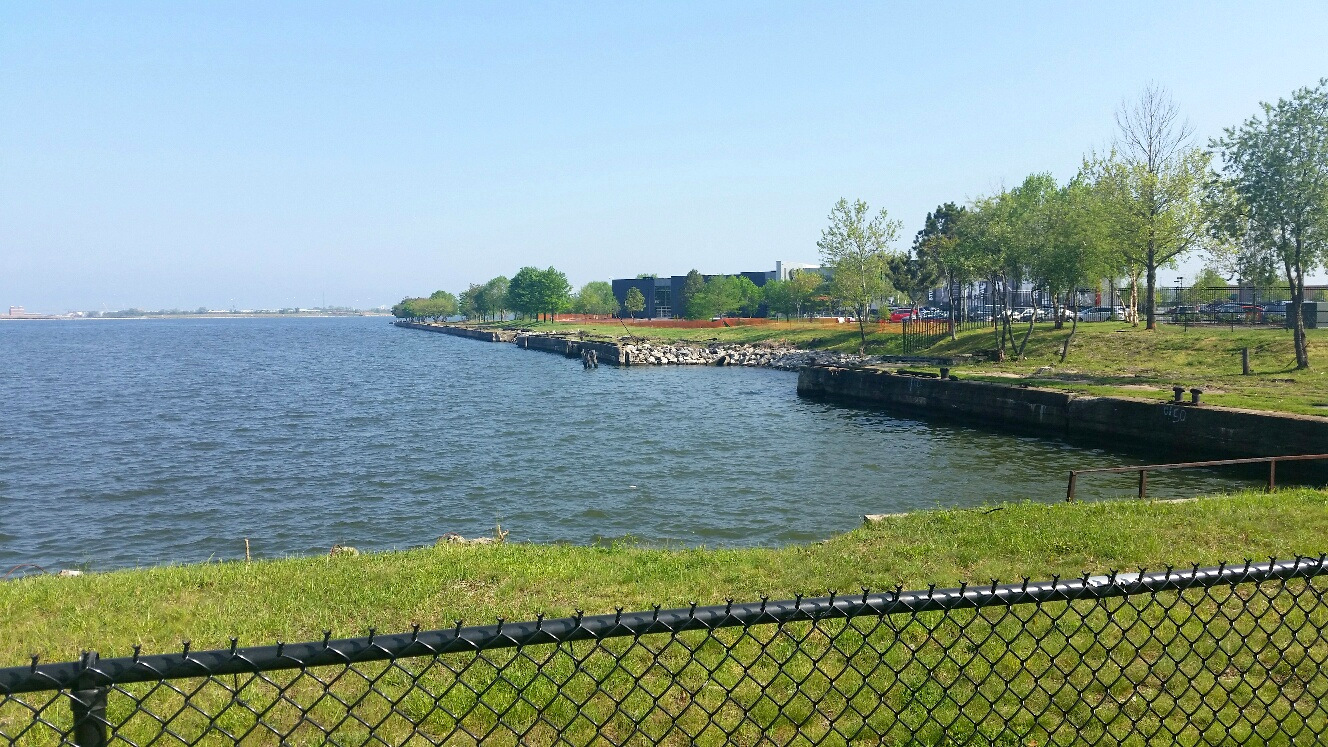 The old pier to the right once handled machinery and foodstuffs exported to the world by the Western Maryland Railway. Sagamore wants $26 million of TIF funding to design, engineer and construct a promenade along the pier. Its own contribution to the rebuild – $0.00. (Mark Reutter)

With all that investment by the city and all those tax credits from the state, how much is Plank ponying up?

According to the financing application, Sagamore will contribute $328 million in private capital for the horizontal development. That’s one fifth of the share requested from city, state and federal sources.

But most of this contribution is not in hard construction costs. Instead, it includes many “soft” development costs such as $111 million described as “the sum of reoccuring [stet] costs associated with continuous master planning related to the project” and $23 million in legal, marketing, design, consulting and “local outreach” expenses.

Actual “shovel in the ground” costs amount to $75 million, according to the Sagamore application. They include such tangential items as installing a litter-cleaning water wheel on the Gwynns Falls ($1,020,000) and relighting the Hanover Street Bridge for dramatic effect ($1,134,000).

In all, Plank’s company will pay less than $1 for every $7 paid by TIF bonds for shovel-in-the-ground costs.

Because of the extremely high level of bond funding, Port Covington will run a deficit of $292 million during its first 18 years of construction before the tax base will produce enough revenues to support the bonds.

Sagamore say a “special tax” will be imposed to make up for the shortfall. But this is where things become risky. In his report, Carlson Bise calls the deficit “troubling” and warns that “as currently construed, [the project] does not ‘pencil out.’”

In fact, it is not clear from the application who would be responsible for paying the projected “special tax” of $292 million – the vertical developers or Sagamore or some amalgam of both.

And what if a large office or apartment building is delayed and the property is unable to generate the tax increment revenues currently envisioned by Sagamore’s armchair analysts.

This possibility was raised by Larry I. Silverstein, a Baltimore developer who is a citizen member of the city Board of Finance at its April 25 meeting.

He was asking, essentially, could the vertical part of Port Covington (the residential and commercial structures) fail to materialize, leaving citizens holding the bag for the cost of the already-in-place horizontal investment (roads, sewage and water lines)? 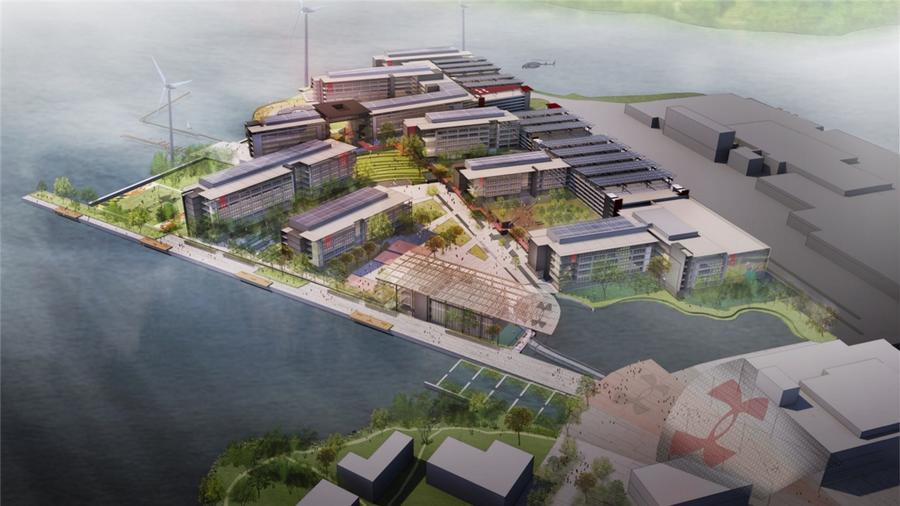 An artist’s rendering of the proposed UA campus framed by the rebuilt pier and a hydrothermal lake. Sagamore is asking for $18.6 million in TIF money to build a connecting bridge and plaza around the lake. (Sagamore Development Co.)

“The vertical component is the city’s ultimate security,” Silverstein pointed out. “In this case, it is really simply a horizontal development. Bonds are issued to pay for that. But what is the mechanism in place so that we’re not left holding those securities?”

The city’s TIF advisor, Keenan Rice, said that it would be up to the city’s “due diligence” to make sure that there was enough vertical development in the pipeline before issuing bonds for the horizontal infrastructure.

“But doesn’t the horizontal development have to get ahead of that vertical on this scale,” Silverstein asked.

Deputy Finance Director Kraus replied, “Of course, the special property taxes so imposed are the first lien on the property. So we believe that [as long as] we have those commitments from the vertical, our position will be very secure.”

Rice chimed in, “If for some reason the vertical doesn’t go forth, we want to make sure we still have sufficient collateral in place to support this special tax that will then be levied and collected to pay for the debt service of the bonds.”

“Alright,” Silverstein replied in a resigned tone. “As long as you thought about it.”

Even though Silverstein’s question was never really answered – will the city hold Plank to ironclad guarantees that developers and bank loans are lined up before TIF bonds are issued – the Finance Board went on to approve the $660 million application.

That decision placed the legislation in the hands of the City Council, which has final say in the financing plan.

Tomorrow (Wednesday, July 27), the Council’s Taxation, Finance and Economic Development Committee will hear from the public about the largest-ever TIF ask in Baltimore history. 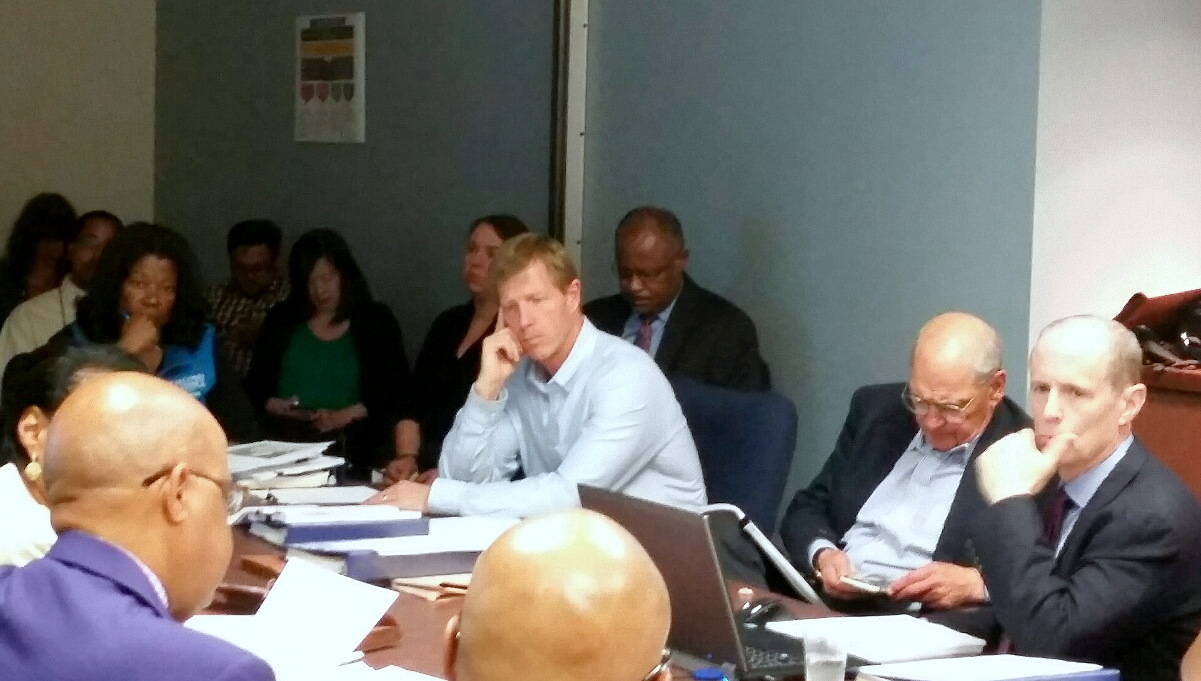