Reporters pressing Baltimore County Police Chief James Johnson yesterday on his officers’ fatal shooting Monday of Korryn Gaines had a number of questions, among them: why did his officers fire first?

Police in “warrant service gear” trying to talk the 23-year-old into giving herself up had been standing in the open doorway of Gaines’ Randallstown apartment, never crossing the threshold, spokeswoman Elise Armacost said.

Sitting on the floor with her five-year-old son when police first arrived, Gaines had displayed a Mossberg 12-gauge pistol-grip shotgun and, as Johnson put it, “wielded it  around,” at times pointing it toward the officers.

Early on in the six-hour standoff, “as soon as she pointed a weapon at the three officers,” police had gone to a District Court Commissioner and secured an arrest warrant charging Gaines with first-degree assault on a police officer. (They had been attempting to serve her with a bench warrant for failing to appear in court to face March traffic citations, and other charges.)

So why at about 4 pm, when Gaines again pointed the gun at police and allegedly threatened to shoot them if they didn’t leave, did the officer not step back into the hall and continue the negotiations?

Police said an officer fired a single shot at Gaines and missed, prompting Gaines to fire back at the officers twice. The officer then fired three times, killing Gaines, police said.

“We did fall back. We took positions of cover. We summonsed in equipment and trained negotiators,” Johnson said, to reporters assembled in the lobby of the Baltimore County Public Safety Building in Towson.

“You have an individual who committed a first degree assault with police officers – pointing a shotgun at them. We have warrants for her arrest,” Johnson continued. “For hours we pleaded with her to end this peacefully. We were concerned about the safety of the child.”

Had she at any point, Johnson was asked, threatened to harm the child?

Johnson would only repeat, “We were concerned about the safety of the child.”

In the end, the child, Kodi, was shot, although police said they could not confirm whether by their weapons or his mother’s. He was taken to Johns Hopkins Children’s Hospital and is recovering in good condition, officials there said. Johnson said the child was shot in the arm.

Another person in the apartment at the time of the standoff at the unit block of Sulky Court, Kareem K. Courtney, had exited the premises along with a one-year-old child and was apprehended, police said. Courtney, 39, was charged with second-degree assault in connection with an alleged fight with Gaines on June 28.

The police officer who shot Gaines has not been identified and, as of yesterday, the officers involved had not given statements, Armacost said. She also said none of the police involved were wearing body cameras during Monday’s confrontation, seeing as body cameras had just been implemented in Baltimore County Police in early July. 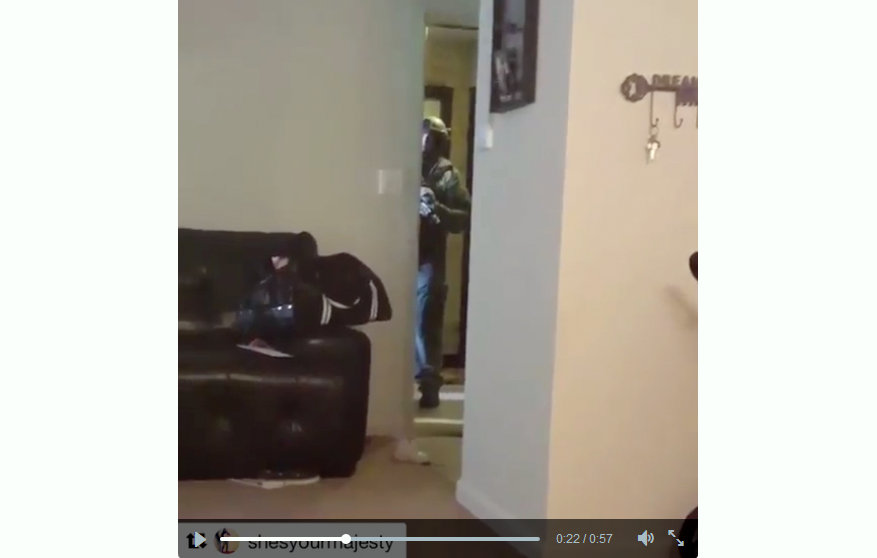 From a video Korryn Gaines posted sometime during the Monday standoff with Baltimore County police.

Gaines posted several videos on Facebook and Instagram during the standoff, but police asked Facebook to deactivate the accounts “to preserve the integrity of the negotiation” Johnson said.

“Followers were encouraging her not to comply with negotiators’ requests that she surrender peacefully,” Armacost said. “This was a concern.”

In response to public furor over police acting to seemingly suppress a Facebook or Instagram record of what happened, Armacost said police “do not have the authority or ability” to shut down social media but can make such requests through Facebook’s “law enforcement portal.”

Baltimore County police applied for and received “exigency deactivation because of a barricade situation involving an armed subject with a child,” Armacost said in a written statement to the media.

The police may not have obtained Gaines’ videos officially, but the Internet grabbed several and circulated them widely, as Gaines death was added to the grim national roster of African-Americans who died in recent encounters with police.

A voice, presumably of a police officer, can be heard asking Gaines about her phone and a helmeted officer holding a gun can be seen standing in the doorway.

“And what do they want to do?” Gaines asks.

“Kill us?” the boy answers.

In another video, posted to Instagram weeks earlier, Gaines is shown loading the shotgun, which police said she obtained legally.

Other postings by Gaines make clear her distrust of law enforcement.

[Several of the videos Gaines posted can be viewed at THIS LINK.]

Gaines’ views also come through in the lengthy cellphone video she shot during the March 10 traffic stop that resulted in the court date she failed to appear for, to face traffic citations and charges for disorderly conduct and resisting arrest.

Police said they stopped Gaines at Pikeswood Drive and Liberty Road because the silver Toyota Camry she was driving lacked license plates. Instead there was a cardboard placard that read “Free Traveler” and another homemade cardboard sign bearing this inscription:

“Any government official who compromises the pursuit to happiness and right to travel, will be held criminally responsible and fined, as this is a natural right to freedom.”

Gaines at first refused to show her license to the officer who stopped her, demanding instead repeatedly, “Sir, do you have a delegation of authority order?”

According to the police report, Gaines eventually produced her license but the officers could not find any record of registration or vehicle emission testing for the Toyota and cited her.

“Defendant Gaines threw the citations and must appear form out of her window,” the police report says.

Told that police planned to tow her car, Gaines refused to exit it, “saying the officer would have to ‘murder’ her,” the police report said. Eventually she had to be physically removed from the car and the children released to the custody of their grandmother.

Asked yesterday if the police who came to Gaines’ apartment were aware of any of this history, Armacost said she wasn’t sure whether the officers attempting to serve the warrant knew of what she described as Gaines’ “anti-government views.”

“She clearly had anti-government views – you see that very clearly in her interactions on the March 10 traffic stop,” Armacost said. “She’s not using any kind of required registration. She’s got this handwritten piece of cardboard . . . she engaged in a physical fight with officers.”

This prompted a question from a reporter from the Real News Network: “If Miss Gaines was, instead of a black sovereign-tist, a white woman with white supremacist views, do you think she’d be alive today?”

“I think if the same situation evolved with a person of any race or ethnicity we would have the same outcome,” Armacost replied. 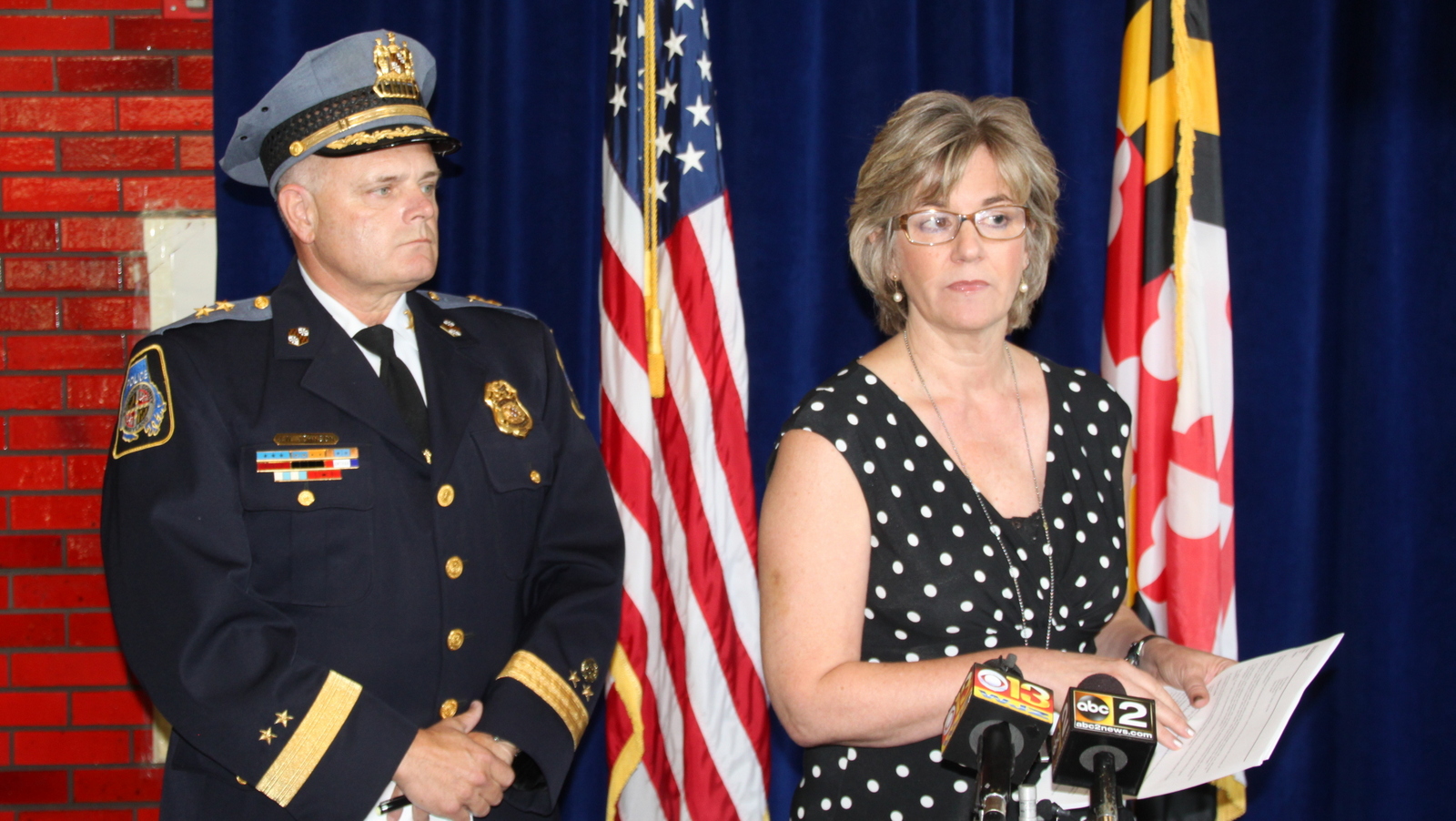 Gaines’ possible mental health issues came up as well, yesterday, when Armacost noted, “We did consult with mental health professionals during the course of this barricade based on some information that we had about her.”

Was the police entry into Gaines’ apartment legal, another reporter asked. After Gaines had refused to open the door, the officers had obtained the key from a landlord and simply opened it.

“We’re looking at the entry using the key” Johnson replied.

Should the officers negotiating have made better use of family members to de-escalate the situation, was another question put to Johnson.

“We are following standard trained procedure, time-tested  – the intervention of family members you could argue could de-escalate – sometimes not so much,” he said. “We have trained personnel, they’re using licensed individuals that specialize in the field that we also use for these negotiations.”

“When she made the threat to officers and said  ‘Leave or I’ll kill you’ it seems like there was a clear opportunity for officers to leave and regroup and re-strategize rather than shoot,” another reporter asked Armacost.  “Was there any thought given to that?”

Armacost said police waited as long as they could to act:

“Our officers exercised extreme patience in this situation. She was threatening from the moment she pointed that gun at the three officers who went to serve the warrant. We were there for basically six to seven hours trying to talk her out,” she said. “As those of you who cover daily news know, sometimes barricades go on for a very, very, very long time. The goal is to stay as long as it takes to get someone to come out.”

“However when someone points a gun directly at an officer and threatens to shoot them, it very well may not end well,” she said. “And that is the situation we have in this case.”