Baltimore’s streams have a drug problem. Researchers who sampled the Gwynns Falls on the western side of the city found a mix of pharmaceuticals and illicit drugs in the water, including a byproduct of heroin use.

No one’s going to get high from drinking or splashing in the stream, which flows into Baltimore’s harbor. Nor should they try, because it’s contaminated with raw sewage from the city’s leaky sewer system.

But in a paper published yesterday in the journal Environmental Science & Technology, the researchers report that concentrations of one drug detected there – amphetamine – are great enough to alter the base of the food web that supports fish and other aquatic creatures.

“We understand how they got there, but once they’re there we don’t understand what they do,” said Emma Rosi-Marshall, a co-author of the study and a freshwater ecologist with the Cary Institute of Ecosystem Studies in Millbrook, NY.

Rosi-Marshall and her co-authors made their findings while participating in the Baltimore Ecosystem Study, part of a nationwide research network established by the National Science Foundation to study ecological change over long time periods. Rosi-Marshall is co-director of the study.

On two occasions a year apart, scientists sampled four streams in the Gwynns Falls watershed, from the city’s suburbs to a point just upriver from the harbor. They also checked two streams in the Oregon Ridge watershed, a largely forested area north of the city.

More drugs and higher concentrations turned up in the 2014 samples from the Gwynns Falls than in the first round taken in 2013.

The drugs found there included caffeine, a legal stimulant; antihistamine, which is used to treat allergies; acetaminophen, an active ingredient in over-the-counter and prescription pain medicines. and morphine, an opioid pain medication but also a breakdown product from ingesting heroin.

Researchers also identified amphetamine, a stimulant that is widely used and abused; among its legal uses is to treat attention deficit disorder. 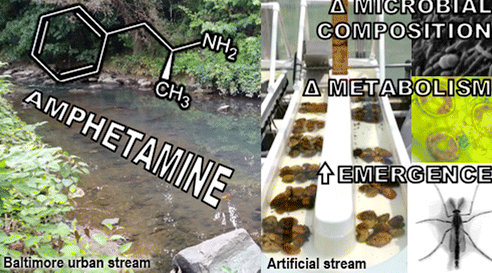 Those weren’t necessarily the only drugs in the Gwynns Falls, Rosi-Marshall said. They were just the ones for which researchers analyzed the water samples.

The Oregon Ridge samples contained some of the same substances, but at extremely low levels, some barely detectable.

“Baltimore is not unusual,” Rosi-Marshall said. Pharmaceuticals and illegal drugs have been found in waters worldwide.

Many of the medications that people ingest are passed out of the body when they go to the bathroom, and many of them then pass untreated through wastewater plants and are discharged into rivers and streams.

But in Baltimore’s case, researchers believe the compounds found in the Gwynns Falls likely got there from the city’s fractured, overflow-prone sewer network.

According to an earlier study, as much as 65% of stream flow in the watershed can be made up of untreated wastewater from leaking infrastructure.

Baltimore City and Baltimore County are spending more than $1 billion each on marathon efforts to remedy their shared sewage problems. Such crumbling infrastructure is not unusual, either, Rose-Marshall noted, but a nationwide challenge.

Rose-Marshall and her team decided to test the ecological effects of amphetamine, by setting up artificial streams at the New York institute.

After exposing four such faux streams to amphetamine at doses comparable to what was found in the Baltimore streams, the scientists saw measurable changes in the aquatic food web.

The growth of biofilms, the very base of the food web, was suppressed in the streams exposed to amphetamine, they found. Biofilms are a mix of bacteria and algae that grow in thin layers on stream bottoms.

“If you ever have stepped into a stream and slipped on a rock, that slippery stuff is biofilm,” Rosi-Marshall explained. It’s the food for aquatic insects, small fish and other organisms.

The artificial streams on amphetamine also experienced shifts in the types of bacteria and algae growing in them. And the aquatic insects in those streams developed more quickly, emerging from their crawling life stage to flying adults much earlier than insects kept in untreated artificial stream systems.

More research is needed, Rosi-Marshall said, to understand how those changes occurred. But she said the findings highlight the need to consider what she called the “collateral damages” to freshwater ecosystems from society’s escalating use of drugs, both legal and illegal, and from the nation’s crumbling infrastructure.

While communities like Baltimore take precautions to ensure that they take drinking water from sources far away from sewage plant discharges, Rosi-Marshall said, “These organisms that are living in these streams don’t really have an option to go somewhere else.

– This article is published with permission from The Bay Journal.