It stated that reporter Kenneth Burns’ access to the “press availability” – the only regularly scheduled event where Rawlings-Blake takes questions from the media – was withdrawn.

“Please take notice that effective immediately, the Mayor has declined to grant her discretionary access to Kenneth Burns of WYPR to attend these press conferences.”

The letter does not give a reason for Burn’s suspension from the conference, which takes place within the mayor’s suite of offices typically starting at 10 a.m. on Wednesdays.

Burns has covered the mayor and City Hall for more than three years and has been a fixture at the press conference. 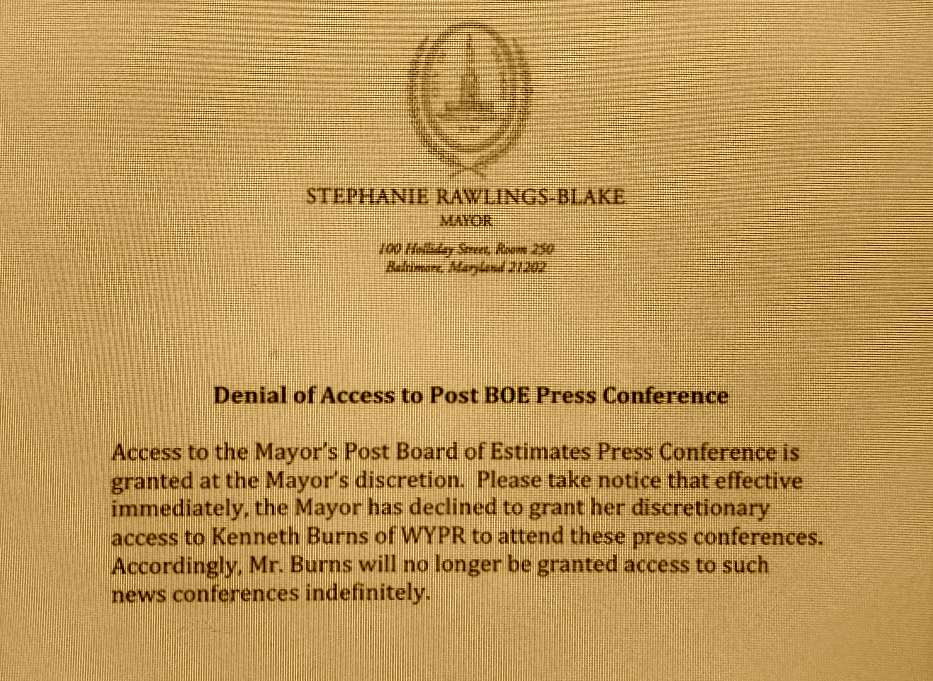 “I’m Not Going to Understand it”

According to two sources, Burns angered the mayor last week by asking a question about whether she had to go to Annapolis to ask for policy changes in the Baltimore Police Department.

Rawlings-Blake: “You know, I am not 100% sure what you specifically are referring to.”

Burns: “Whether it is policy that’s governed by state law or public local law or–”

Rawlings-Blake: “Yeah, I’m not going to understand it right now. I can follow up with you and get you an answer on it.”

Rawlings-Blake: “You’re not going to be able to explain it, so I promise and commit to get you an answer for your question.”

Rawlings-Blake: “I don’t have an answer for you.”

Burns: “You can’t explain whether or not you have to go to Annapolis to change the law?”

Staged for the Press

In his email to McCord last night, McCarthy wrote, “WYPR may send another reporter to participate in this weekly press availability, however, until further notice the denial [of Burns] is in effect.” Rawlings-Blake leaves office on December 2.

McCarthy did not respond this morning to The Brew about the suspension of Burns. McCord and Burns also have not issued any comment.

The mayor’s weekly sessions, which take place after the Board of Estimates meeting, are a vehicle for reporters to gain access to the mayor.

Many of the conferences are dominated by presentations by the mayor, her staff or chosen community leaders.

Twenty of last week’s 28-minute conference, for example, was consumed by testimony about the “B’more for Healthy Babies” initiative.

Rawlings-Blake and Health Commissioner Dr. Leana Wen announced that the infant mortality rate was at a record low in Baltimore.

The final eight minutes were available to reporters to ask questions.

When Rawlings-Blake does take questions, she sometimes responds by saying her office “will get back to you with answers.”

Questions The Brew has asked the mayor have frequently gone unanswered by her media staff.

The Burns-Rawlings-Blake exchange occurs at 22:30 and continues through 24:00.