For nearly a year, community groups in Fells Point have been pressing their councilman, James B. Kraft, to introduce height restrictions in an historic district that developers have eagerly eyed for large-scale construction.

Today Kraft, whose term in office ends on December 5, blamed “the leadership” of the same groups for his decision to back away from the proposed Greater Fells Point Overlay District.

His decision opens up the potential for new construction reaching 60 feet, subject to approval by a city historic commission and other regulations.

After declining to discuss the matter with a reporter, Kraft offered a statement today before the Land Use and Transportation Committee, on which he serves as vice chair.

He said he had never been in favor of the overlay district he had introduced to the City Council on August 16.

He said “leaders of the community associations who insisted” on the overlay district sought other accommodations – and he blasted an unnamed person who he said had signed off on the overlay plan, only to criticize it during Council hearings.

“Walking into a Fog”

Marty Bement, one of the leaders of the height restriction movement, said he and others had tried for months to work with Kraft to protect the community from overdevelopment.

Many of them grew frustrated, he said.

One activist, Deborah Tempera, complained last week at a hearing where Kraft was present, “Our councilman is not a developer. He is supposed to be our voice.” Another Fells Point homeowner, George Frazier, said of the zoning rewrite process, “It’s like walking into a fog.”

“Everybody wanted the height to be at 35 feet, but we gradually agreed in meetings with Councilman Kraft on 45 feet because we very much wanted to have something,” Bement said.

Fewer than 1% of the 1,400 existing buildings in the historic district are over 45 feet, according to a fact sheet submitted by the associations to Kraft.

Only one such building is in the proposed overlay district, while a handful are along the waterfront where ancient warehouses have been converted to residential uses.

Earlier this summer, Fells Point activists expressed anger when Kraft refused to expand the overlay district as far west as Caroline and Eden streets, where the existing building stock, dating to the 1800s, could serve as a buffer to the high-rise development at Harbor East and along Central Avenue. 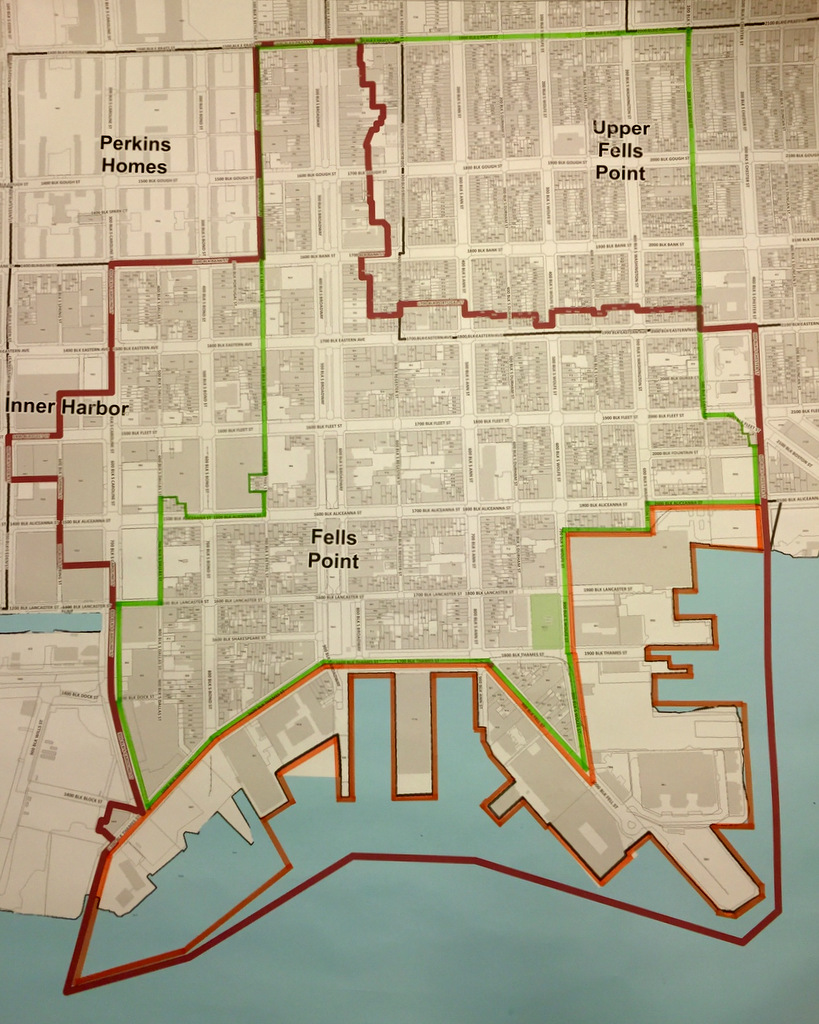 In brown, the Fells Point overlay district originally backed by five community groups. In green, the CHAP historic district that Councilman Kraft had proposed for the height overlay. Kraft did not introduce the legislation during today’s markup of the TransForm Baltimore zoning bill, which will go before the City Council for a vote next Monday. (Fells Point Task Force)

Kraft said the following at the Land Use Committee markup session before an audience mostly of developers’ attorneys and city representatives:

“I had meetings with the community over a period of time with regards to a request to put in an overlay within certain boundaries in Fells Point. The request was to do it within the historic district and to limit the amount of height to be placed on buildings both residential and commercial in the historic district. I met with the community and I negotiated with them what I thought was a compromise on the boundaries for that overlay.

“Two things happened after my having agreed on the potential boundaries for that overlay. Number one is one of the principal people involved in the negotiations about the overlay appeared here a couple of times in our public hearings and basically said that he was not satisfied with the boundaries that were agreed upon. That they were not satisfactory to him and he wanted them changed.

“But more importantly, what happened is after we agreed on that, when many people came in whose properties had been proposed to be rezoned from B-1 to R-8 in the new rezoning. Those people came to us and said, ‘We do not want them to be rezoned for B-1. We want them re-zoned to C-1.’

“Well, when they had B-1, they did not have overlay limits. They had FARs [floor area ratios], and they had no restrictions that would have applied to them under the overlay. In addition, we had a number of people coming to us with the support of the community associations, saying, ‘We want C-1, but we want it only for use.’ We had other people saying, ‘We want to have mixed-use capability.’ So it was not fair to support people who wanted C-1 governing for use and not support people who wanted C-1 usage for mixed-use. So what we continued to get was a mixed message from the community on this.

“From day one, I believed that we did not need the overlay. I believe that protections in the Fells Point Historic District provided through CHAP [Commission for Historical and Architectural Preservation] more than provided the coverage and protection that folks needed. In addition, the waterfront is protected by the waterfront overlay, which are the same restrictions that were in the original Fells Point Urban Renewal ordinance, which has been in effect since the early 1990s or some 25 years. So none of that has changed. For all of those reasons, I have decided not to introduce the overlay in Fells Point.”