The Mayor’s Office of Emergency Management (MOEM) doesn’t know how many gallons of volatile Bakken crude oil roll through Baltimore on CSX trains. Or what’s considered best practices for responding to a massive oil train explosion like the Lac-Mégantic disaster that killed 47 people in a small Canadian town.

But officials say these information gaps don’t matter. Why? Because the city has THIRA.

The Threat and Hazard Identification and Risk Assessment (THIRA) is Emergency Management’s bible, a report that defines the “critical core capabilities” of Baltimore government such as risk and disaster resilience, supply chain integrity and security, threats and hazards identification, environmental response, fire management and suppression.

Thus, for City Council Bill 16-0621 to call on MOEM to undertake a safety assessment of “one unique concern” – the transport of crude oil by rail – is “not consistent with our operational framework,” Robert Maloney, director of MOEM, wrote to the Council last week.

An oil train explosion, Maloney strongly suggested, is not a significant risk to Baltimoreans based on the THIRA assessment. So to make the “human capital investments” needed to prepare for the possibility of the risk would be “inefficient and ineffective” and would force MOEM “to sacrifice critical services we already struggle to maintain.”

All that said, what was the real stopper for Maloney?

The responses of city officials to the oil train bill may have been couched in bland bureaucratese, but they were all the ammunition a City Council committee needed to kill the impact study bill for this term.

But here, too, was a catch.

As a result, Wen would need up to $270,000 to hire a consultant, who in turn would need a year to complete a study that meets the agency’s benchmarks for quality and comprehensiveness, which Wen defined as “structured analysis components to be conducted at the community- and city-level; funds to support convening and stakeholder focus groups; support for data collection and analysis; as well as ongoing performance management and reporting.”

Were that not enough to derail a bill that had two aims – study the safety and health risks of oil-carrying trains in the city and establish an emergency evacuation plan – there was a third agency in the mix.

This was the Department of Planning. It maintains a trio of plans – the All Hazards Mitigation Plan, Climate Adaptation Plan, and Disaster Preparedness Project and Plan (DP3) – that assess the impact of earthquakes, tornadoes, extreme wind, storm surges, climate change and dam failures on city infrastructure – but not oil train explosions.

For Planning to perform a preparedness study on an oil train accident would cost between $40,000 and $200,000, said Andrew Kleine, city budget director.

In his memo, Kleine also provided the cost of oil train assessment studies that have been conducted by other municipalities.

But instead of discussing why Baltimore’s cost estimates were so much higher than the other jurisdictions (which were not identified by Kleine), the budget director simply ended his memo by voicing opposition to Bill 16-0621.

Significantly, Kleine pointed out that oil train studies could create “additional costs that would be required in mitigating any risks identified in the reports.”

Kleine didn’t spell out these additional costs, but they are easy enough to imagine.

For example, if the studies identified unsafe conditions that were the city’s responsibility – say, poorly maintained bridges over railway tracks, hazardous road crossings or water lines leaking on railroad property – the city could be on the hook to fix them.

In other words, risk assessment is a two-way street. By looking too closely at aging rail infrastructure in Morrell Park or downtown inside the Howard Street Tunnel, the inadequacies of the city’s own infrastructure could be exposed. 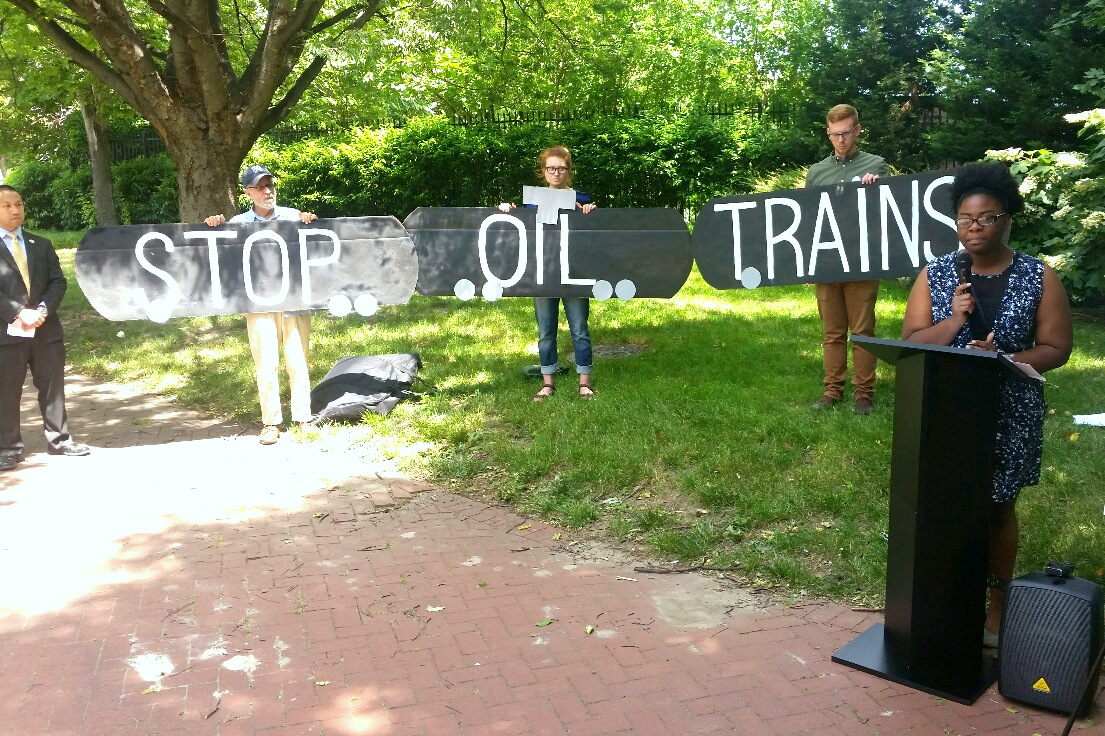 Destiny Watford, 2016 recipient of the Goldman Environment Prize, speaks at a rally last June above the tunnel where the CSX train derailed. At far left is Del. Clarence K. Lam, a doctor and public health specialist who has unsuccessfully pushed for oil train regulation in Annapolis. (Mark Reutter)

Maloney did not testify against Bill 16-0621 at Tuesday’s hearing.  He and his staff were too busy assessing the deadly collision of a school bus and MTA bus earlier that morning, the committee was told.

However, city lawyer Victor Tervala was present, and he didn’t mince words.

The oil train bill was a “ham-fisted approach” to legislation that the law department couldn’t approve because it infringed on the mayor’s powers to control the day-to-day operations of local government.

Under the city charter, the Council didn’t have the right “to disrupt city operations by requiring agencies to perform tasks of a temporary nature that fall outside the routine work of any agency,” according to Tervala.

She said the environmental coalition had put together the oil train bill after consulting with city officials, including Tervala, in July 2015.

CCAN specifically removed a part of the draft bill to meet Tervala’s criticism on an unrelated issue. At no point did he object to the bill on the grounds that it was stepping on the rights of the mayor or disrupting the duties of city agencies, Havemann said.

When the bill was introduced last January, “we were expecting for it to go through pretty quickly,” explained CCAN campaign coordinator Jamshid Bakhtiari.

It certainly appeared that the bill had strong political support. It was sponsored by 13 of the 14 Council members and was introduced by the chamber’s president, Bernard C. “Jack” Young.

But then the process came to a halt for 10 months until, pushed by CCAN activists, the bill was brought before the Judiciary and Legislative Investigations Committee three days ago, only to be killed by the refusal of the panel’s chairman, James B. Kraft, to bring the bill to a vote. (See Part 1.)

CCAN and its coalition partner, the Environmental Integrity Project, objected to the way the matter was handled at Tuesday’s hearing. So did a dozen residents and community leaders who voiced support for the bill and testified about the importance of having a preparedness plan ready in the event of an oil train accident.

(The advocates argue that a 60-or-70-car unit train carrying 1 million gallons of highly flammable crude Bakken oil poses many times the danger to citizens and property than a regular freight train that might include a few cars carrying hazardous chemicals.)

“What is so frustrating,” Bakhtiari reflected a day after the hearing, “is that we’re being told to start all over again with the new City Council. But we’ve already done that. We thought we had satisfied the concerns of the law department and the other agencies a year ago. Now look what they’ve come up with.”