Salima Young took one look at the long lines of people waiting to vote inside Beth Am Synagogue on Eutaw Place this morning and turned right around and left.

“Oh I’ll be back. I’m determined to vote – I always vote – but I just can’t wait in a line like that,” Young said, hustling out to her car.

Heavy turnout combined with not enough scanners made for long lines, delays to the start of voting and frustrated citizens in some city locations and across Maryland today.

Earlier in the morning, one of the two ballot scanners malfunctioned at Young’s Reservoir Hill polling place, where two precincts – Precincts 8 and 9 – were voting this year, causing additional delays and confusion.

By mid-morning the situation had eased. Poll workers had arrived to assist and the line no longer stretched out the door, which had caused what some said had been a two-hour wait.

But there was still a line and the 55-year-old Young, who works in an assisted living center, said she couldn’t spare the time away from work to stand in it.

Beth Am was one of the four Baltimore polling places kept open an extra hour after opening late for the April primary. 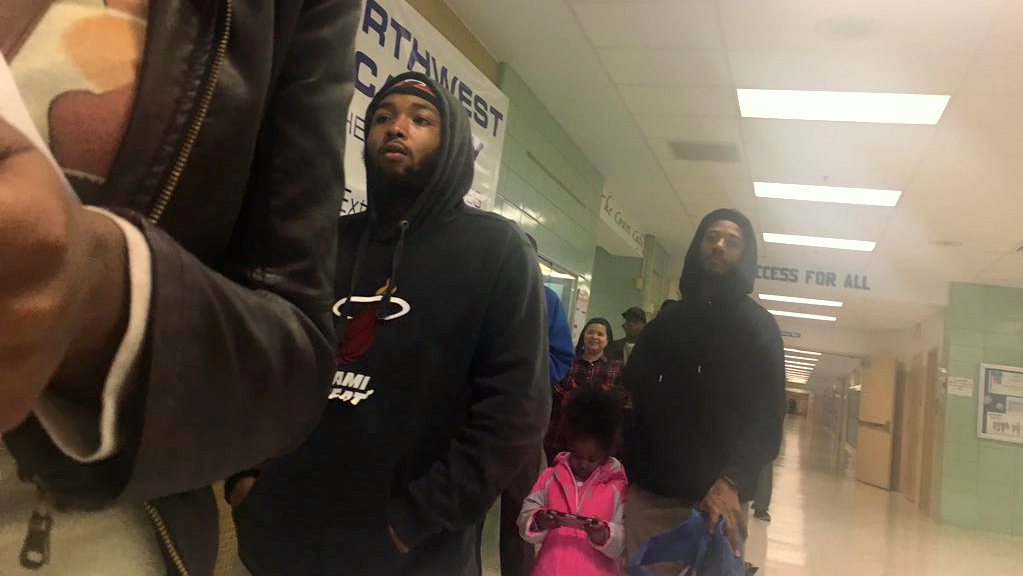 In Pikesville, the line to vote today snakes down the hallway. (Stacia Brown)

In Baltimore County, the lines were long but voters were determined to stick it out.

Writer Stacia Brown waited 38 minutes to vote this morning, parked in a line that snaked through the hallways of a Pikesville middle school. She occupied herself enjoying “the whole culture around voting lines.”

“The person who remembers to [bring] a lawn/folding chair. The blow-by-blow commentator: ‘Oh, we movin’ now. We turn in’ the corner now,’ ” she tweeted.

“The old ppl who ask the young folk if they ‘did their research’ and quiz them on the down-ticket candidates.”

One Scanner to a Precinct?

Early in the day, polling places with only one scanner was the major complaint the American Civil Liberties Union of Maryland had received about today’s 2016 Presidential election.

“It seems that unless these precincts had historically high turnout, they only had one scanner causing long lines and some people to just leave in frustration,” Curtis said.

Young said she wouldn’t miss a chance to vote and said she is mostly motivated to cast her vote for Democratic presidential nominee Hilary Clinton.

“She is so much more experienced than he is,” Young observed, contrasting Clinton with the GOP presidential nominee. “Donald Trump is so unpredictable. He is a crazy man. We can’t have him.”

But she warned that she is expecting something for her vote.

“They need realize the people that put them up there need help, the working people,” she said. “They need to do something for us – don’t take us for granted.”

Others had a breezier experience today. “It took us 10 minutes,” said Ivy Brooks, 69, after voting along with her son, at John Eager Howard Elementary School.

Both of them voted for Clinton and, for Baltimore mayor, they wrote-in Sheila Dixon.

“With all her faults, she was a good person, a good mayor – she was one of us,” Brooks said. “She had a plan.”

“I’m a retiree, money is tight but things could be worse,” she said. “The Republicans, they’re going to tear up Social Security and take our health care away.”