Pleading for their schools to be improved and not abandoned, students, teachers and others spoke before Baltimore school officials on Tuesday, listing assorted troubles and trauma:

Bedbugs in one school. Ceiling tiles falling down in another. And being stabbed in a school’s basement.

Eleventh-grader Lord Mason-Beckett gave a personal account of his stabbing at a previous city high school he attended.

“You can’t move. You’re in shock and you’re just laying there bleeding. Then for a student to have to be the one to help and teachers just walk past you,” the 16-year-old said, shaking his head at the memory.

And yet violence was cited by school officials as one reason for placing Mason-Beckett’s current school on the closure list. 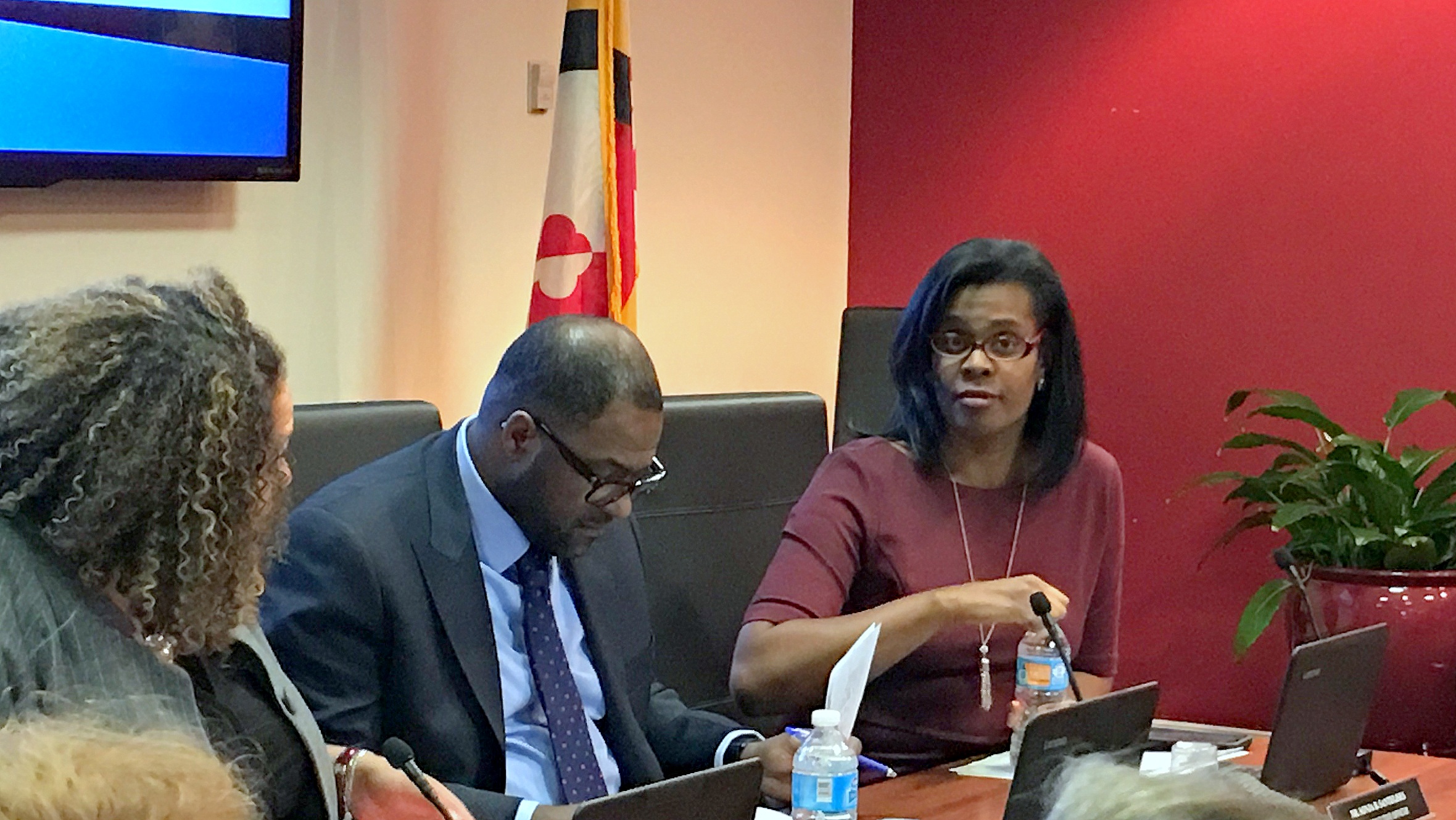 “The school experienced significant tragedy, and remaining in the space has been challenging for staff and students and is not emotionally healthy long-term,” school officials said in their 2016-17 “Portfolio Review,” a document that was the subject of Tuesday’s hearing that drew nearly 100 people to school headquarters on North Avenue.

Responding to that reasoning, Renaissance student Courtney Scribner had a succinct rebuttal.

“You can’t use trauma as a reason to close the school down,” Scribner said, addressing the school commissioners. “Trauma occurs everywhere.”

For all the trauma and pathology that threaten children outside and sometimes inside their schools, caring teachers and mentors are a strong protection against it, these speakers argued.

They came at the argument in different ways. Several pointed out that the school’s 82% graduation rate beats the the city-wide average. Others praised staff, calling Renaissance’s Nikkia Rowe “possibly the best principal in the city.”

“They are like a father and mother to a lot of us,” he said, speaking of the teachers, mentors and other staff.

Helped me Get Food

The school commissioners are scheduled to vote on December 13 on the recommendations, which call for Renaissance and four other city schools to be shut down and several others to be moved temporarily.

Speakers at the hearing included representatives from the network of organizations partnering with Renaissance. Students told their stories, as mentors from Communities United and the Seeds of Promise program sat beside them at the witness table.

“My mentor helped me when the lights were off for a whole month – it was embarrassing,” Bernard Young said. “They helped me. They helped get food in the house.”

Located near the epicenter of last year’s civic disturbances that followed the police-custody death of Freddie Gray, Renaissance was the recent recipient of a $350,000 federal grant to expand its mentoring program.

Part of “Caution,” a painting by Maceo Anthony Cooper-Jenkins based on the writing of Renaissance Academy student Gregory Rochester. (@Renaissance433)

Perhaps the most blistering remarks of the evening were delivered by one of those leaders, Bronwyn Mayden, an assistant dean at the University of Maryland School of Social Work and executive director of the Promise Heights initiative at Renaissance.

Mayden, whose program coordinates social workers, mentors and other resources, criticized the commissioners and CEO Sonja Santelises for threatening to close a school that she said they fail to adequately support.

“I looked around and realized, it was my staff that was there serving the students. I’m not paid by Baltimore City Schools,” she said. “It’s my staff that they come to when the lights go out.”

When Jolley was stabbed and the substitute teacher in the classroom at the time needed mental health counseling, Mayden said, it was her staff that provided it because city schools refused, citing the woman’s status as a substitute.

“That’s not how you treat family,” Mayden said. “And I think you all know better.”

A Sense of Safety

Speakers calling for other city schools to be saved explained how they provide a source of safety and continuity for children.

Grove Park Elementary, in Northwest Baltimore, for instance, is slated for closure in part because enrollment dropped from 306 students in 2012 to 282 in 2016.

The current proposal is to close the school in the summer of 2018. Students would attend Calvin M. Rodwell Elementary School some two miles away.

Grove Park’s defenders saw little need for consolidation given the modest enrollment drop. They bemoaned the potential loss of years-long relationships that school staff have developed with Grove Park’s families. Pre-K teacher Jennifer McCarty, who has been at the school for 12 years, said students care deeply for their teachers and former teachers.

“We provide a sense of safety, family and belonging,” said McCarty, one of a contingent who came to support the school. “My old students always want to come and see me.”

Another speaker noted that Grove Park has a 600-member alumni association, a rare feat for an elementary school. 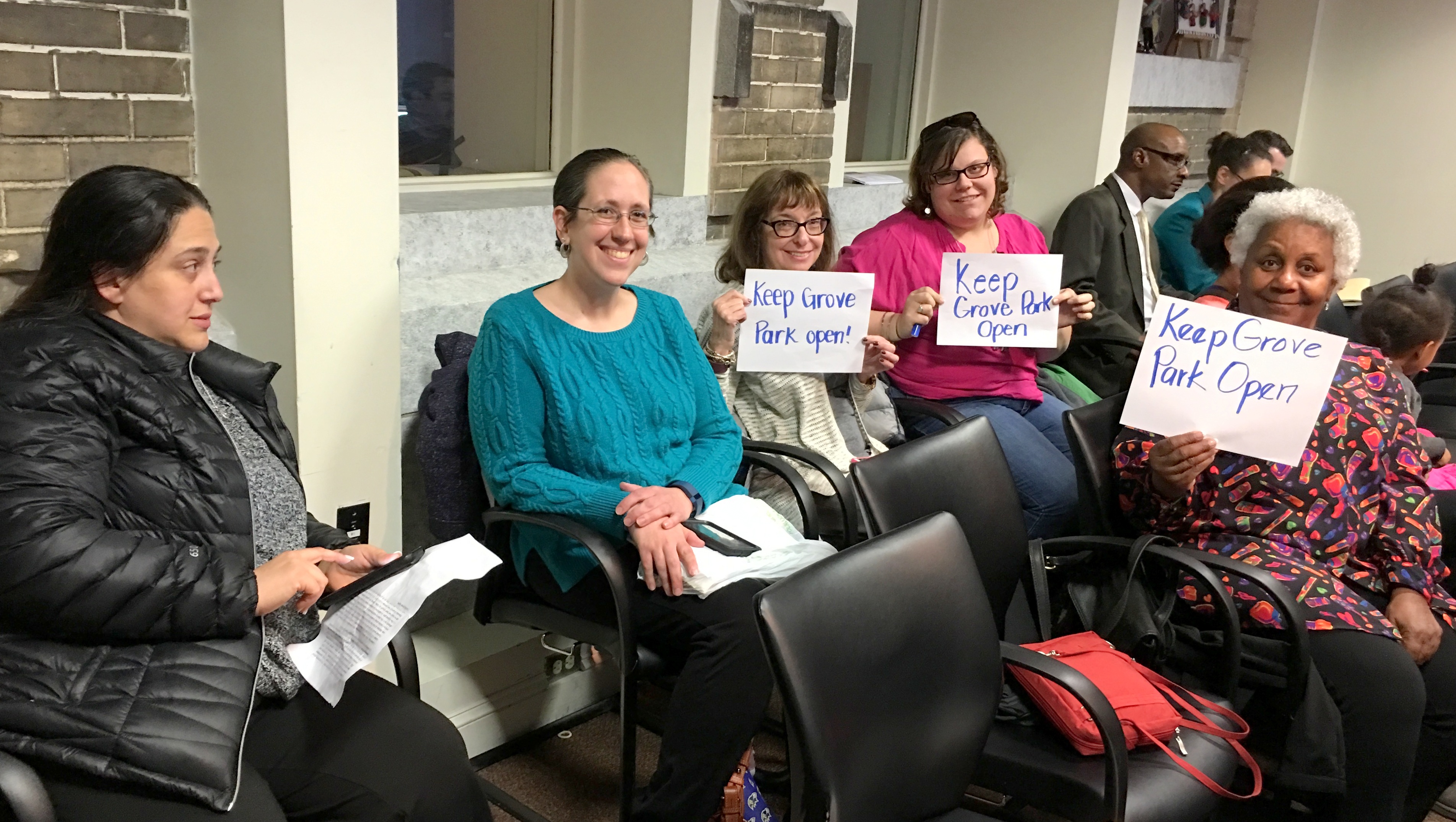 “These are mostly parents who don’t drive,” said Grove Park special education teacher Kenneth Brown. The logistics of picking up sick kids, handling after-school activities and getting kids to and from school in bad weather all become more difficult with the greater distance, he said.

Sean Stinnett, president of the West Arlington Community Association, said walking to Calvin Rodwell would take students through dangerous streets, including his own.

“A 19-year-old kid was shot and killed in front of my house. And we’re talking about students having to walk through there?” he said.

The walk to Rodwell would take them across busy roads, including Liberty Heights Avenue, and past areas plagued with prostitution and a heavy concentration of group homes serving recovering addicts, Stinnett noted.

“It is so serene and peaceful here,” added civil rights activist Dr. Helena Hicks, who lives in Grove Park.

Furley Elementary School Pre-K teacher Noah Walker came to the hearing not to oppose work being done to improve his Northeast Baltimore school, but to say that what’s being planned is inadequate.

Furley is scheduled to be moved to the Thurgood Marshall building in 2017 for “a minimum” of three to five years while the building gets a new heating system and roof and structural repairs.

“There’s no functioning Internet cables, no wireless” in his classroom of two years, he said. “We need windows. We need plumbing. We need wiring. The entire school needs more than just that foundation.”