Celebrities addressed the Women’s March on Washington yesterday, but very few of the half-million people who filled the National Mall from side-to-side and elbow-to-elbow could hear a single word Gloria Steinem, Michael Moore and the other official speakers said.

Instead, rallying in defiance of the new administration of President Donald Trump on the day after his inauguration, the protesters undertook their own messaging with chants and signs.

Many mocked Trump’s crude remarks and behavior around women and the threat they saw from his administration to women’s reproductive rights.

“My body, my choice,” they chanted. “Not going back to the 1950s,” several signs said, one emblazoned with coat hanger symbols, a reference to back alley abortions.

Trump’s 2005 boast, caught on video, that he can “grab” women “by the pussy” because he is a celebrity spawned a major meme for the march, with many sporting knitted pink cat’s ear hats and sending up his misogynistic remark with scorching signage.

“Not up for grabs: my rights,” one of the milder ones said. 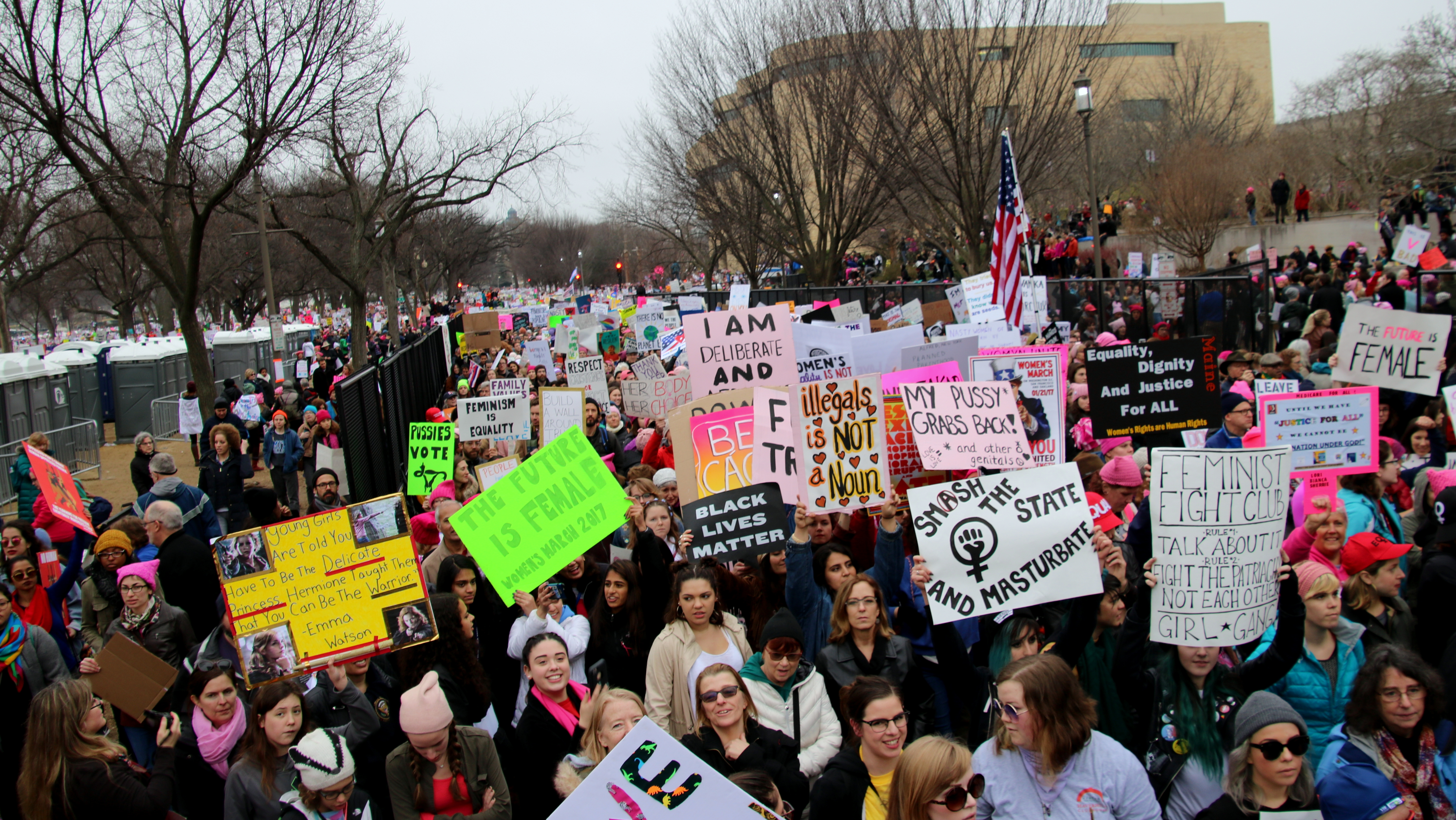 Chanting marchers streamed down Independence Avenue to the beat of a drum. (Fern Shen) 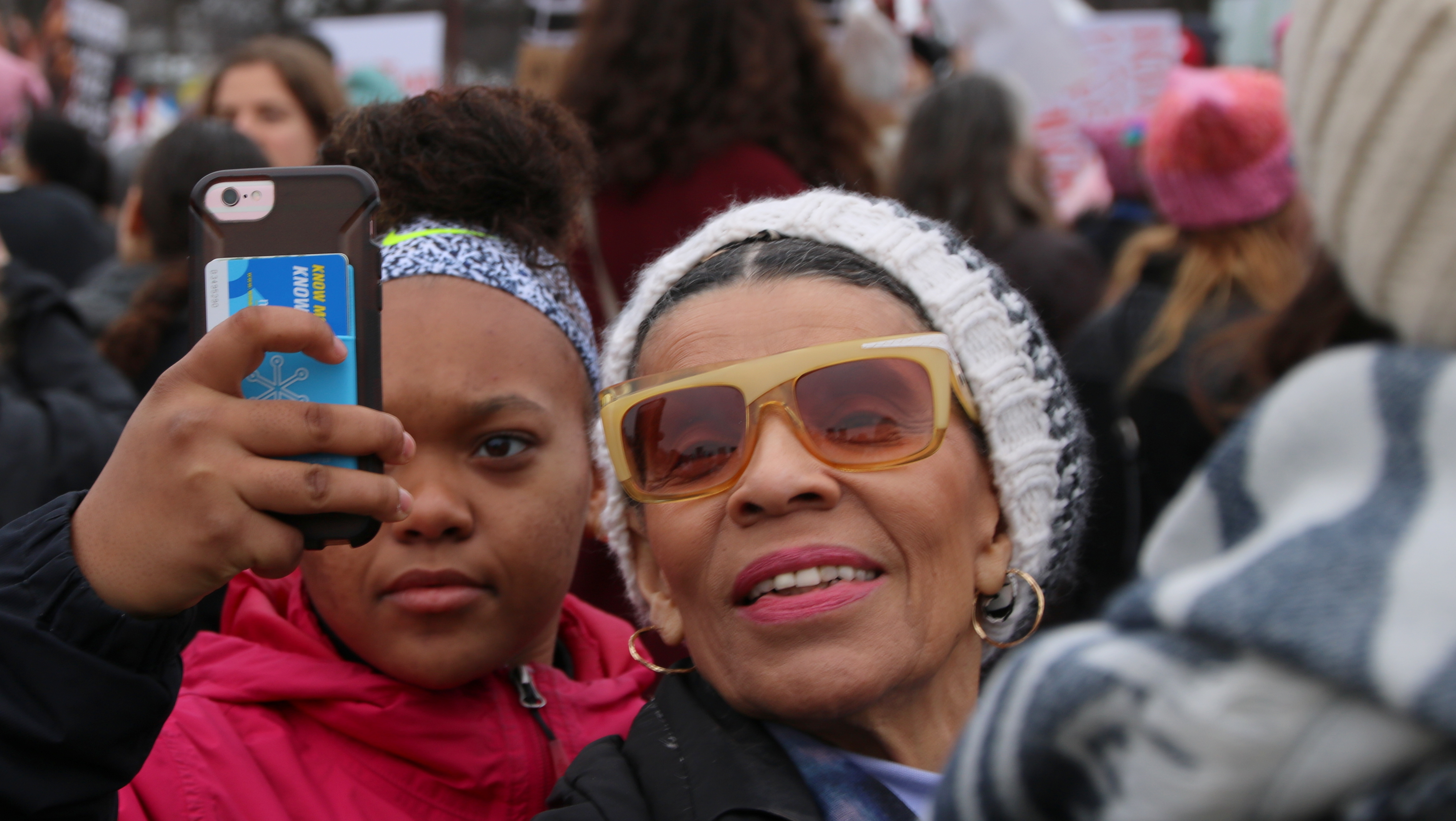 The unexpectedly large crowd overloaded cellphone and Internet service, but phones were in heavy use for selfies and to record the scene. (Fern Shen) 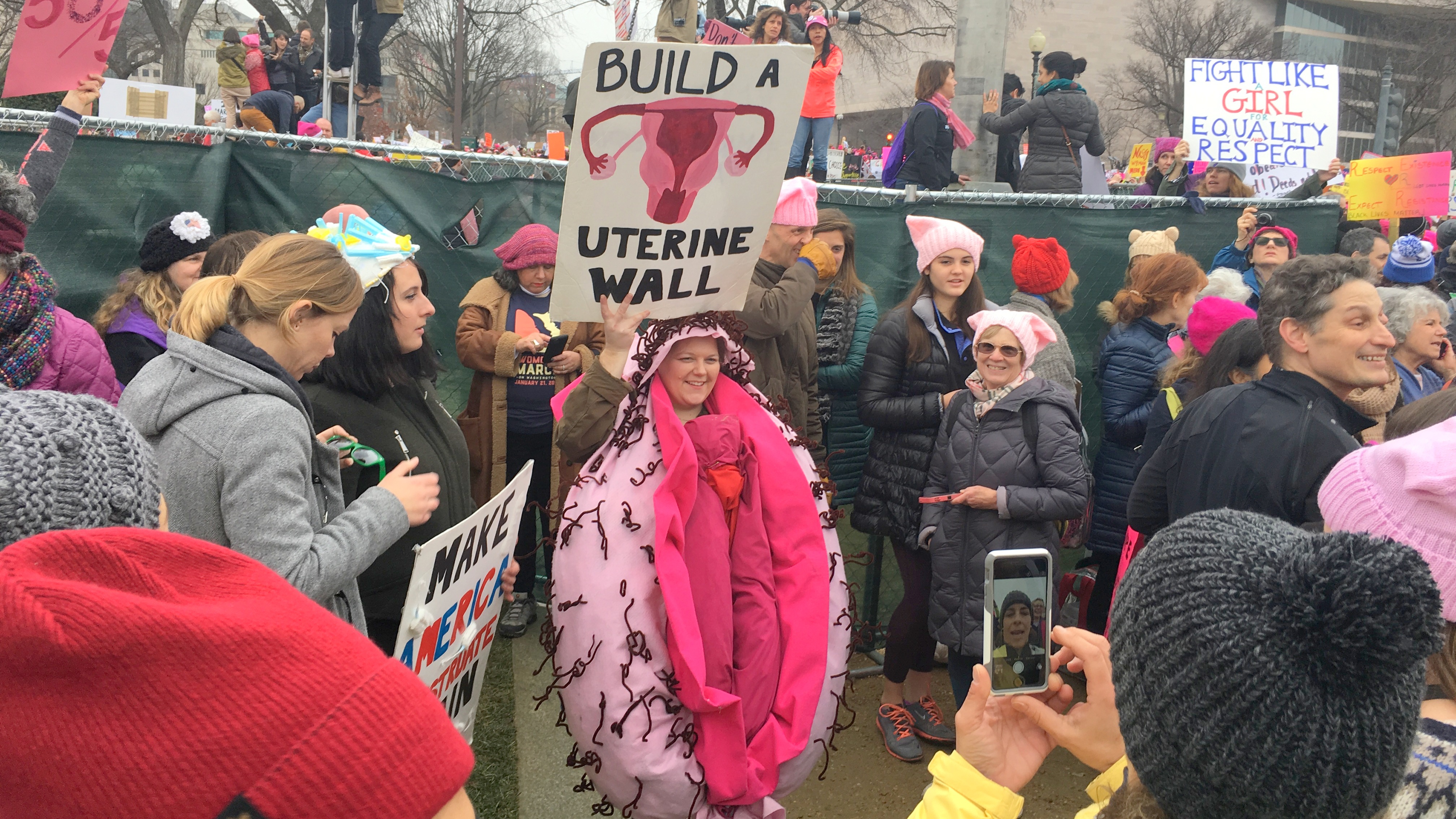 This woman posed for a lot of pictures. (Fern Shen)

The crowd was primarily white and female, but African-American protesters and men had a presence as well, all of them seemingly united in opposition to the Trump presidency.

“You’re orange, you’re gross, you lost the popular vote!” the crowd chanted at one point.

Several simply held up signs that said “2,864,974,” referring to Hillary Clinton’s margin of victory in the popular vote over Trump.

There were “Mujer Power!” signs and, in larger number, “Black  Lives Matter” signs – one of which, carried by a man, said on its flip side “Not your b__ch!”

The Soviet hammer and sickle was featured widely as well, referring to Russian President Vladimir Putin and the pre-election Russian hacking that U.S. intelligence agencies said was designed to hurt Clinton and help Trump.

Drawings of Putin and Trump had the two leaders in a variety of amorous poses. 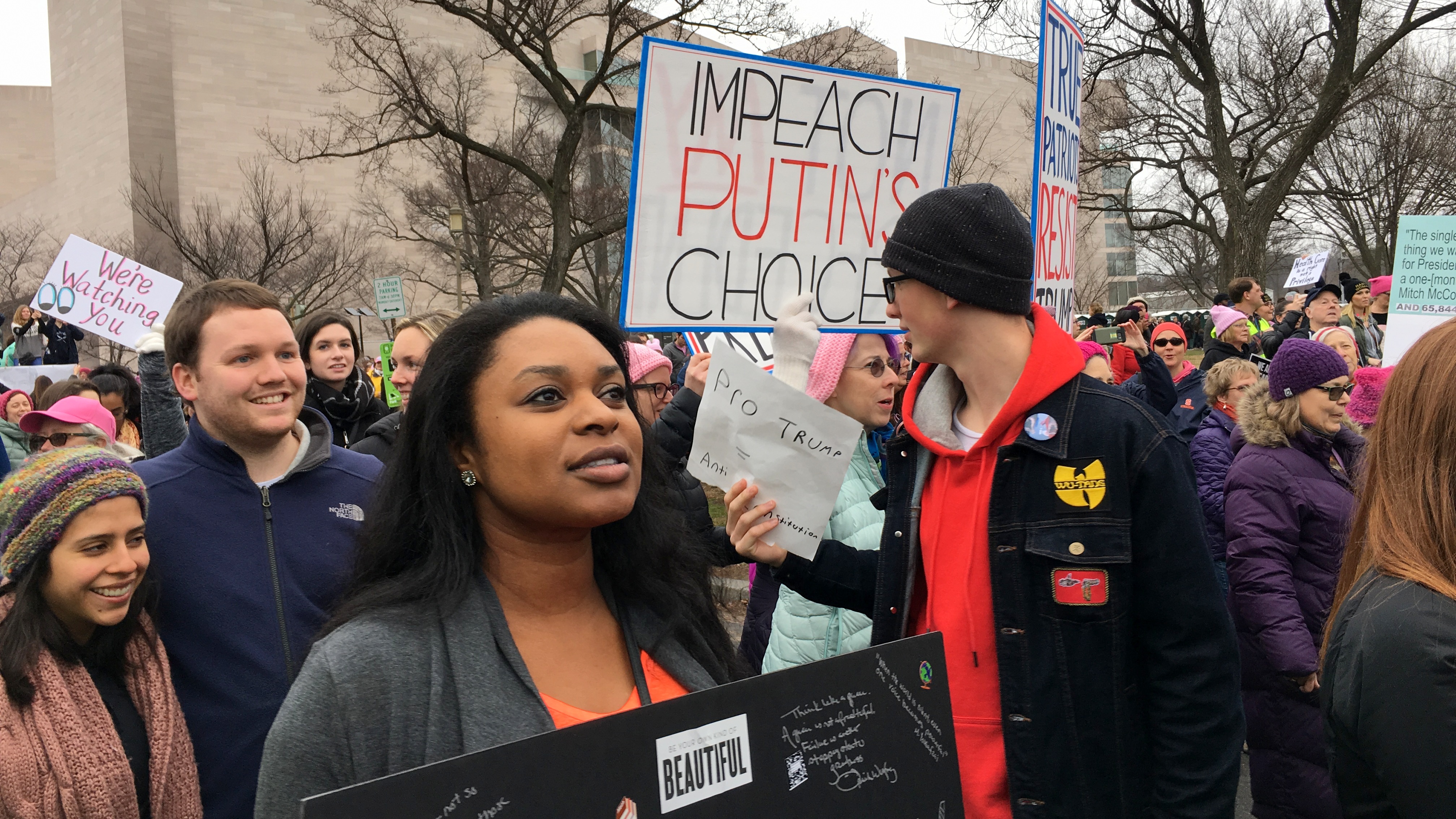 On the Capitol Mall for the Women’s March on Washington. (Fern Shen)

Along with the raunchy defiance, there were more arch and genteel messages, like “We will crush you with empathy!” and “I ♥ facts!”

For first-time marcher Laurie Roman of Baltimore, the event was an opportunity to participate in something personal and positive, after a fractious and ugly political year.

“I came because I feel this election cycle has been very violent – the country feels pulled apart,” said Roman, 61, who works for the National Institutes of Health. “I feel like this is not so much a protest as a celebration of what democracy is about.” 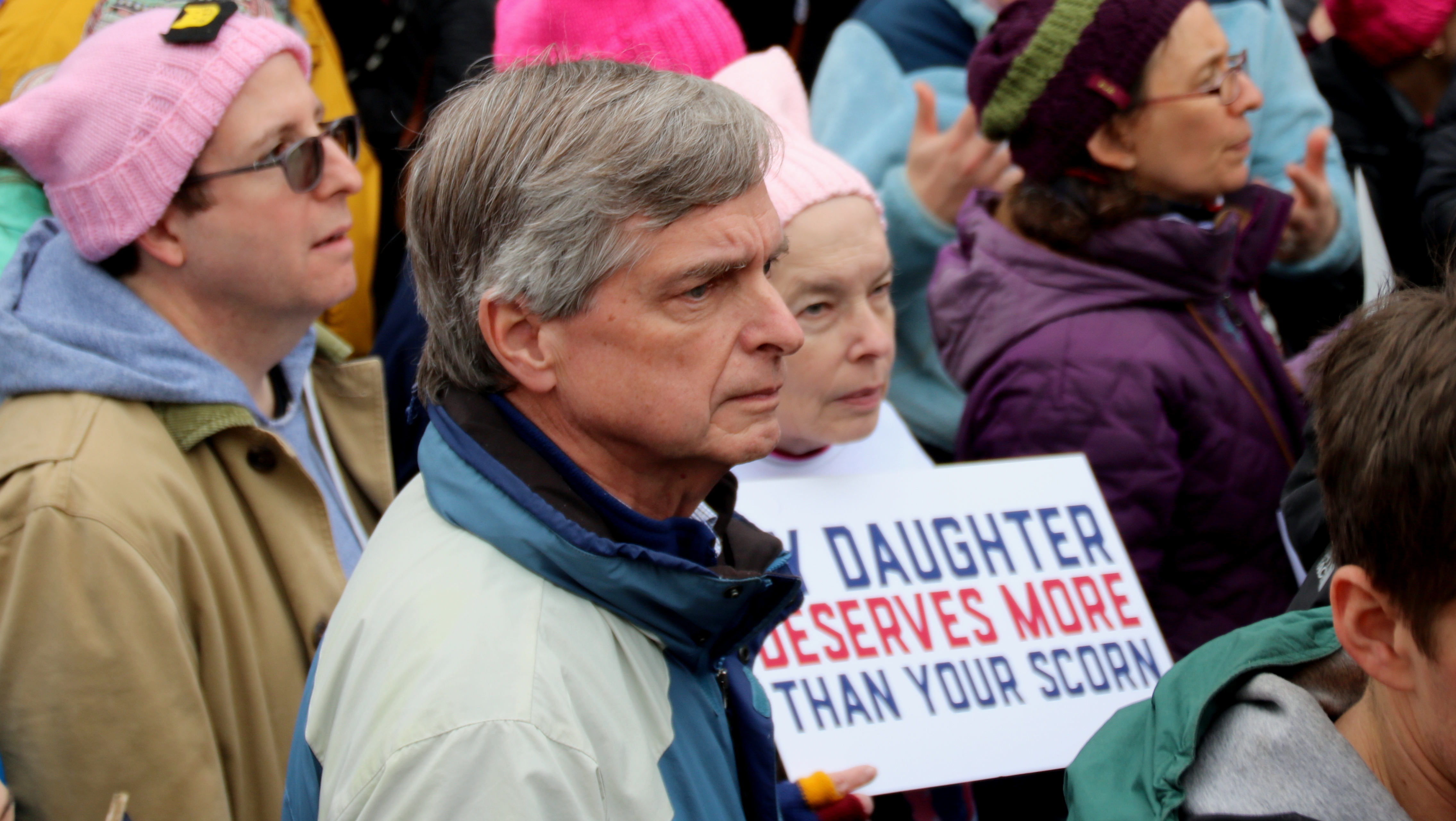 A mother with a message. (Fern Shen)

Five Hours to get to March

The Washington protest was one of hundreds mounted worldwide and across the U.S. on the first day in office for the millionaire real estate mogul and reality television show star.

The march in Baltimore drew an estimated 5,000 people. At least some of them were there because they could not get to D.C. on overburdened MARC and Amtrak trains.

Those who went to Baltimore’s Penn Station hoping to catch a 7:30 a.m. train found themselves waiting in epic lines stretching up Charles Street and then curving back down St. Paul Street.

On Facebook, one woman described to friends why she gave up:

“Line is 15 [people] across and circles the train station twice. Waited for one hour and did not move forward at all. Walked home. Ugh. Plan B: Baltimore march at noon.” 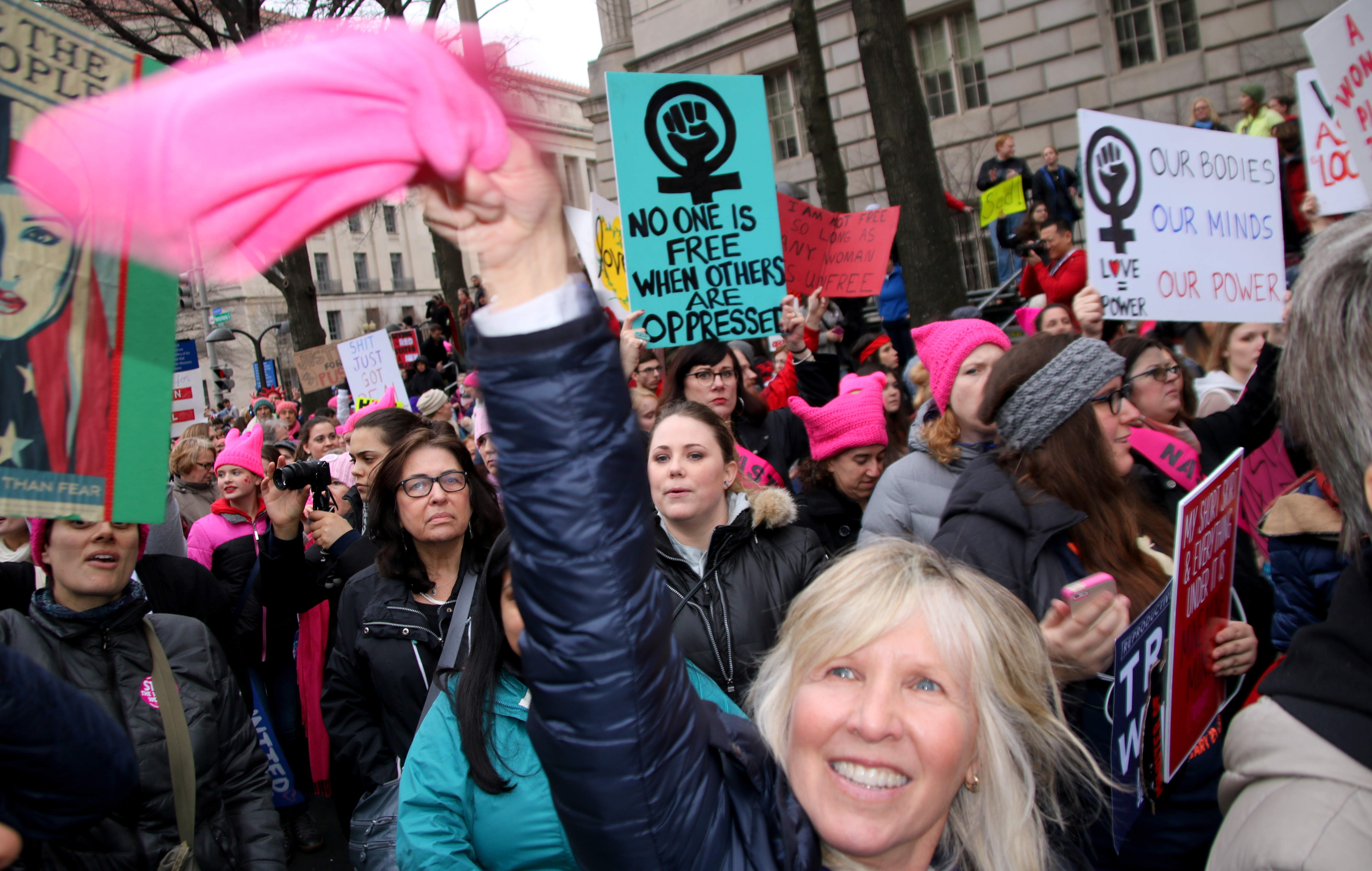 Protesters who made it to the D.C. women’s march were in a jubilant mood as they headed down Pennsylvania Avenue. (Fern Shen) 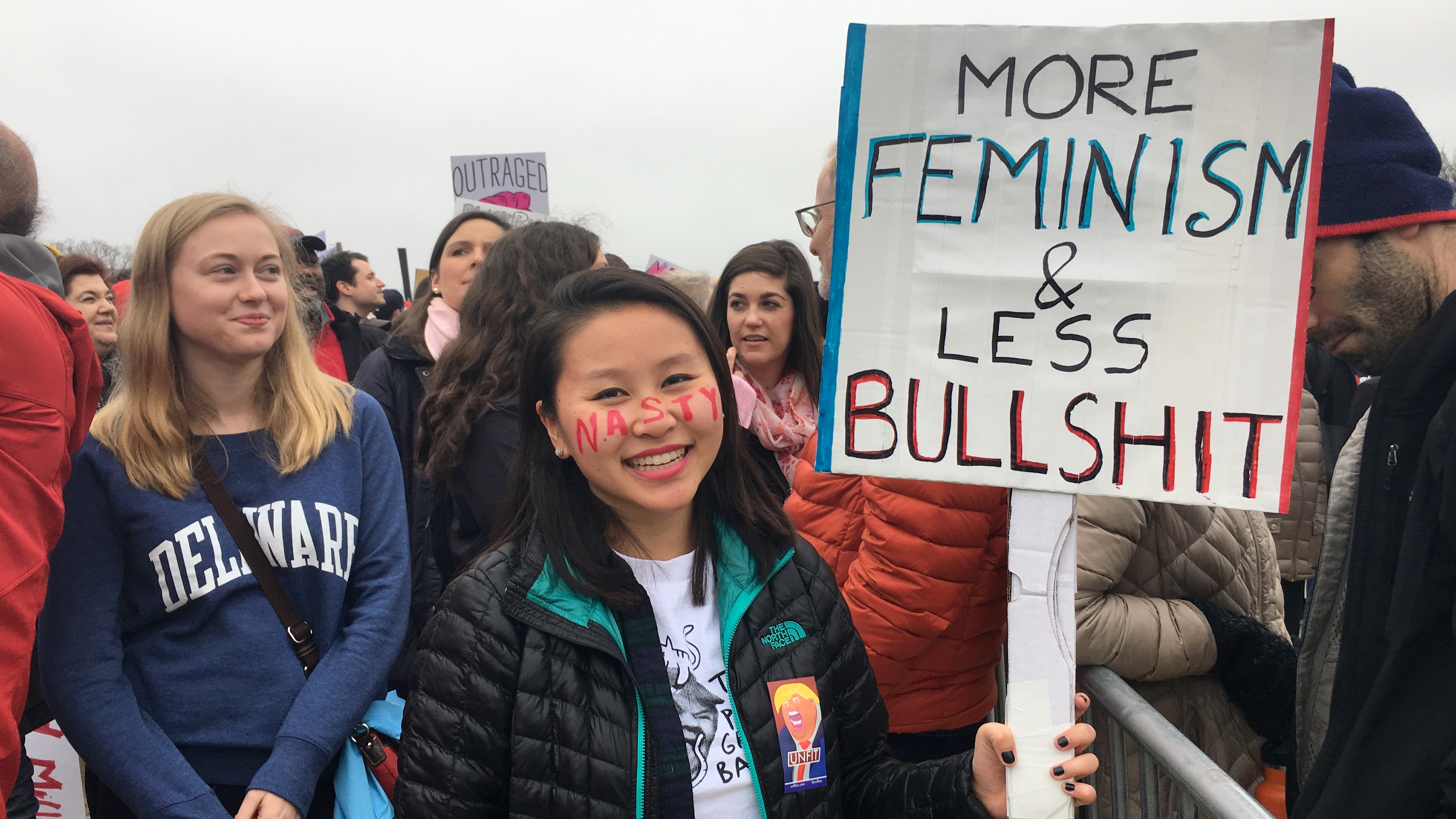 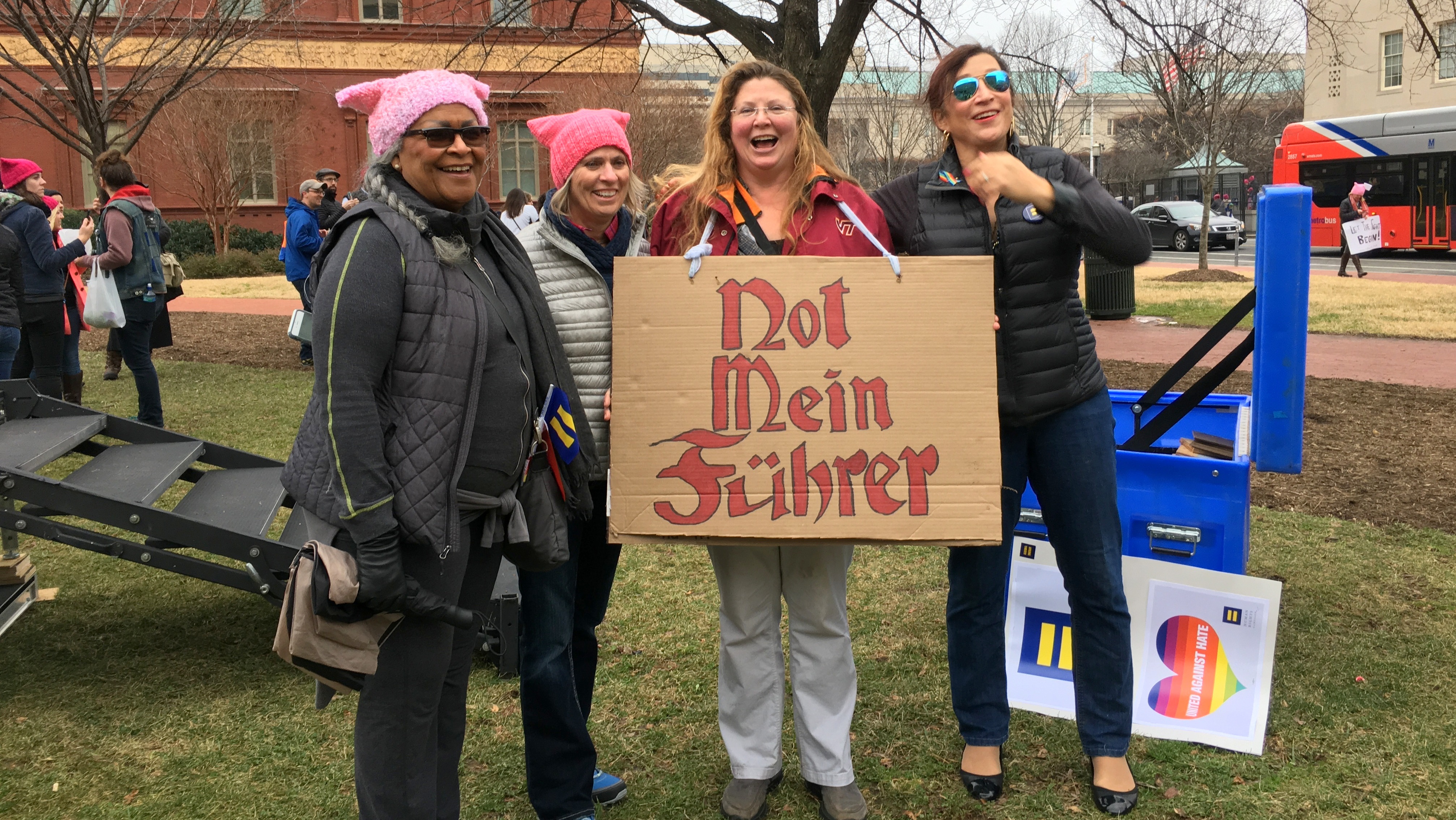 Others, like Baltimore artist Kelly Burke, persisted in what turned out to be a five-hour odyssey to Washington. Frustrated by the wait at Penn Station, unable to find an Uber for six, they finally drove to Bethesda hoping to catch the DC Metro.

“The lines were unbelievable there too,” Burke said. When walking to a nearby drugstore also proved fruitless – the store was sold out of fare cards – Burke’s group was running out of options. Then she acted on impulse.

A man driving a Mercedes SUV pulled a U-turn, picked them up and drove them to the quieter Tenleytown-AU station where they caught the Red Line downtown.

Burke, whose Black Lives Matter-themed paintings deal with race, gun violence and other issues, said everyone in the group wanted desperately to join the public show of defiance.

“It was important for us to have our six numbers counted at the demonstration,” she said. “The Civil Rights movement didn’t end, so much needs to be done. We have to keep pushing.”

A Leader, not a Tweeter

With Republicans now controlling the presidency as well as both houses of Congress, the D.C. march was an opportunity for people to speak out against what they fear would be drastic rollbacks of civil rights and environmental protections.

There were signs of support for the Affordable Care Act, immigration (“Tiny hands can’t build a wall”), climate science (“There IS no Planet B!”), LGBT rights and more. 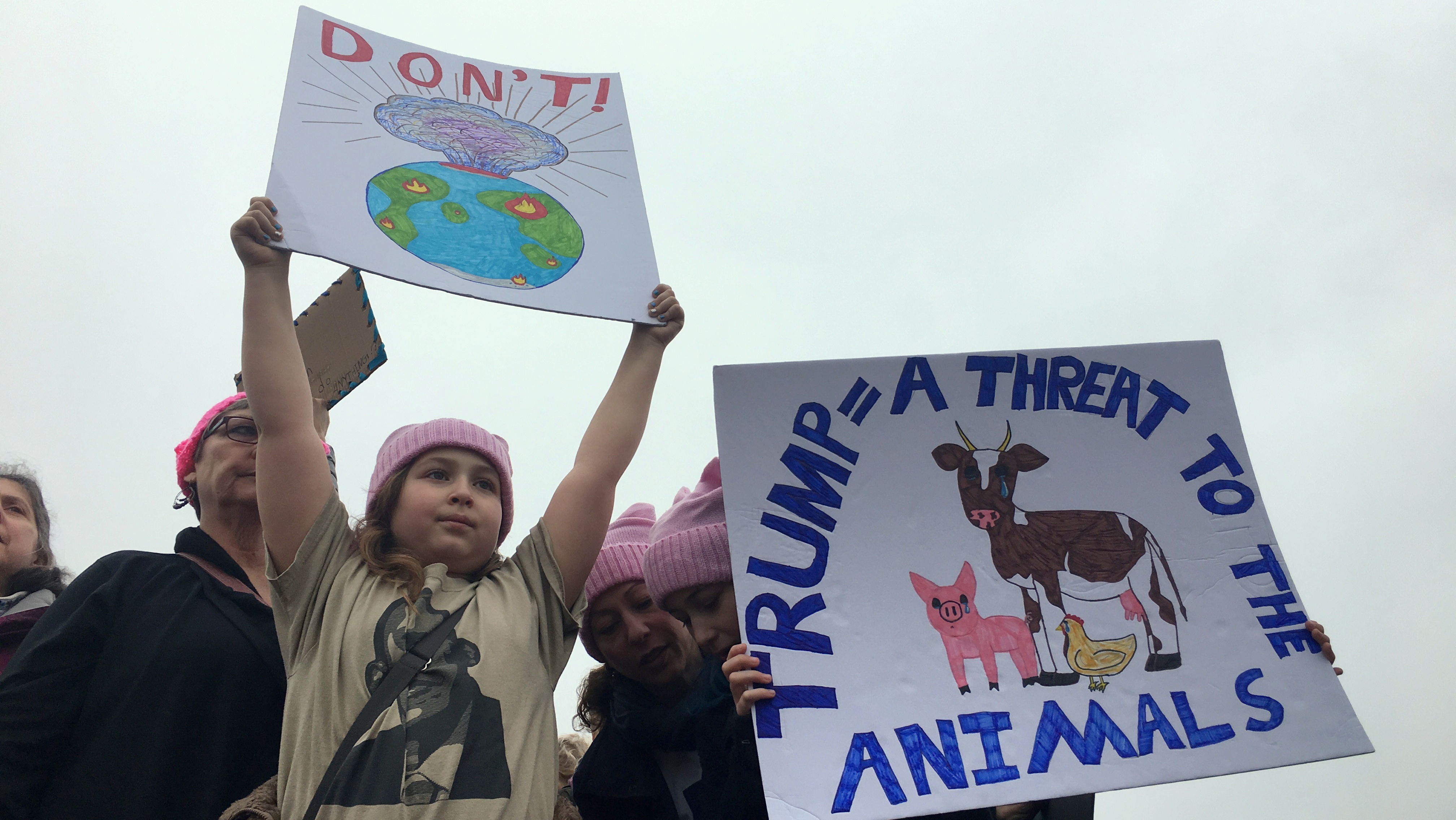 Protesters of all ages spoke out. (Fern Shen) 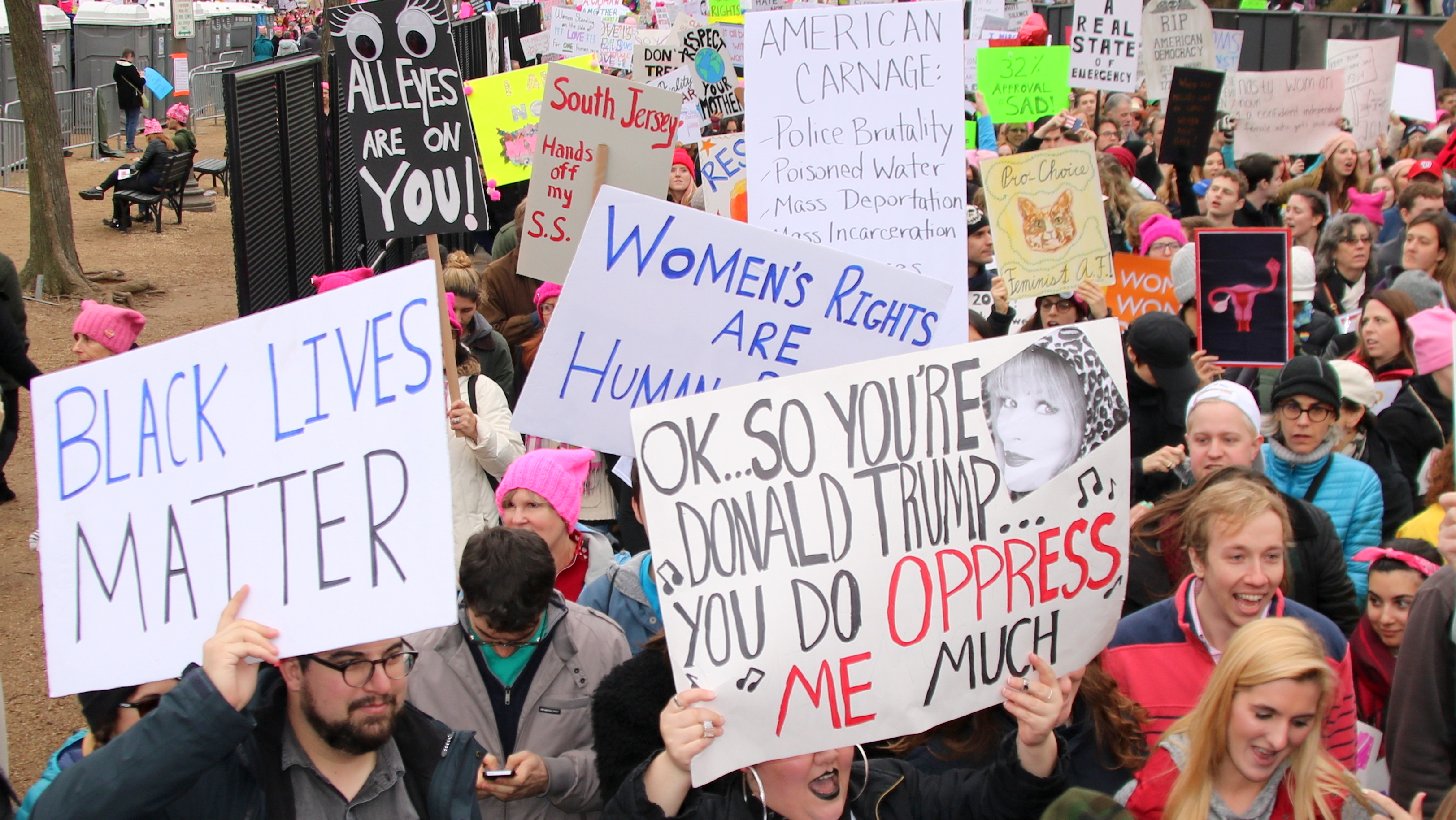 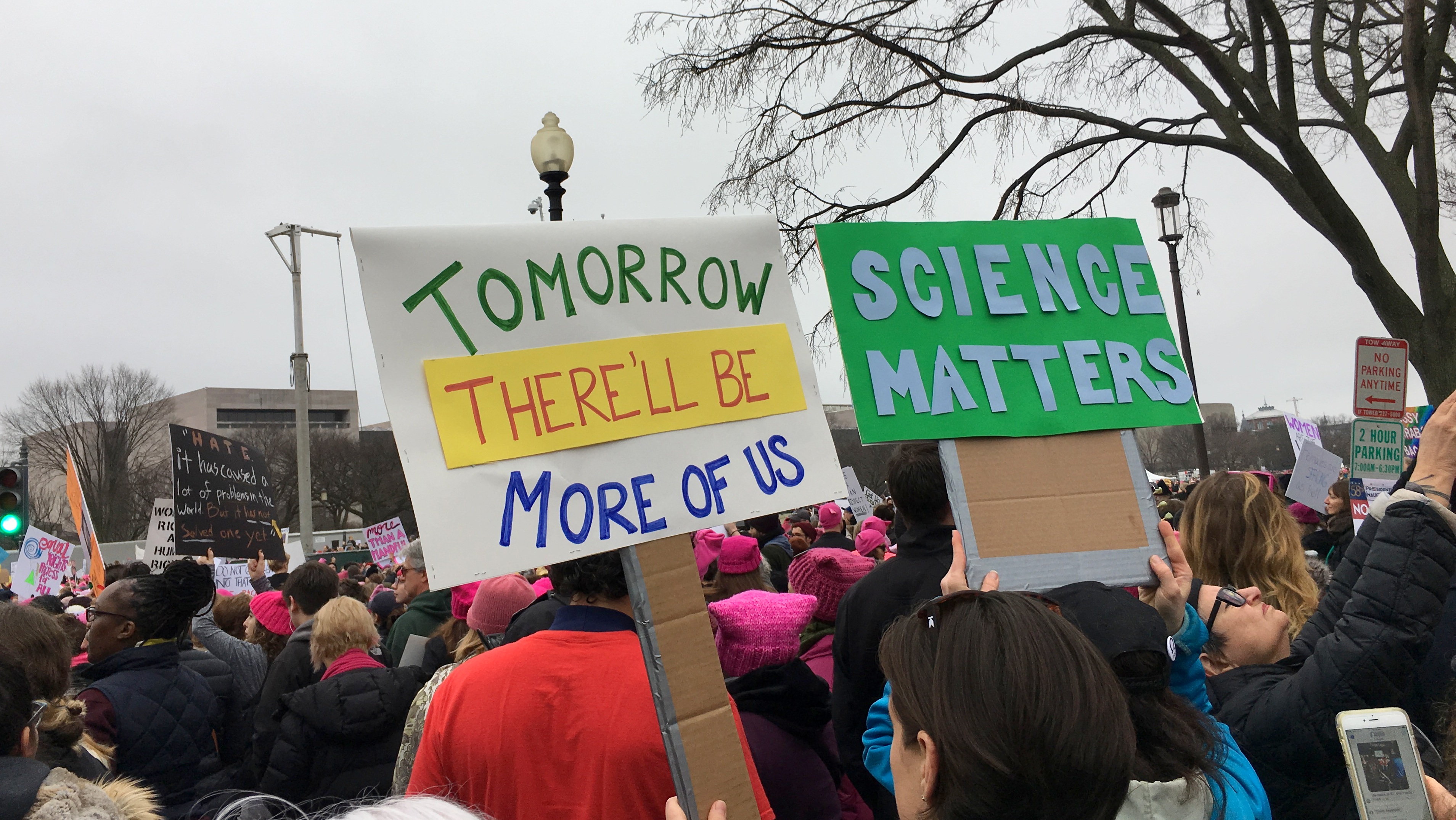 References to war and militarization were few yesterday. “Thanks for protesting the war for the past eight years,” a man yelled sarcastically to demonstrators on Pennsylvania Avenue.

Mostly, though, this blend of young and old – some veteran protesters, others first-timers – interacted amicably.

When the marchers encountered a man draped in the Syrian flag protesting the U.S. Syrian refugee policy, they responded to him warmly.

“No hate, no fear, immigrants are welcome here,” they chanted.

On this day, all the anger was directed at Trump, from his policies to his demeanor to his use of Twitter to defend himself and attack others.

“We need a leader not a creepy tweeter,” the crowd chanted, shifting to this one in front of the Trump Hotel on Pennsylvania Avenue:

“We will not go away, welcome to your first day!” 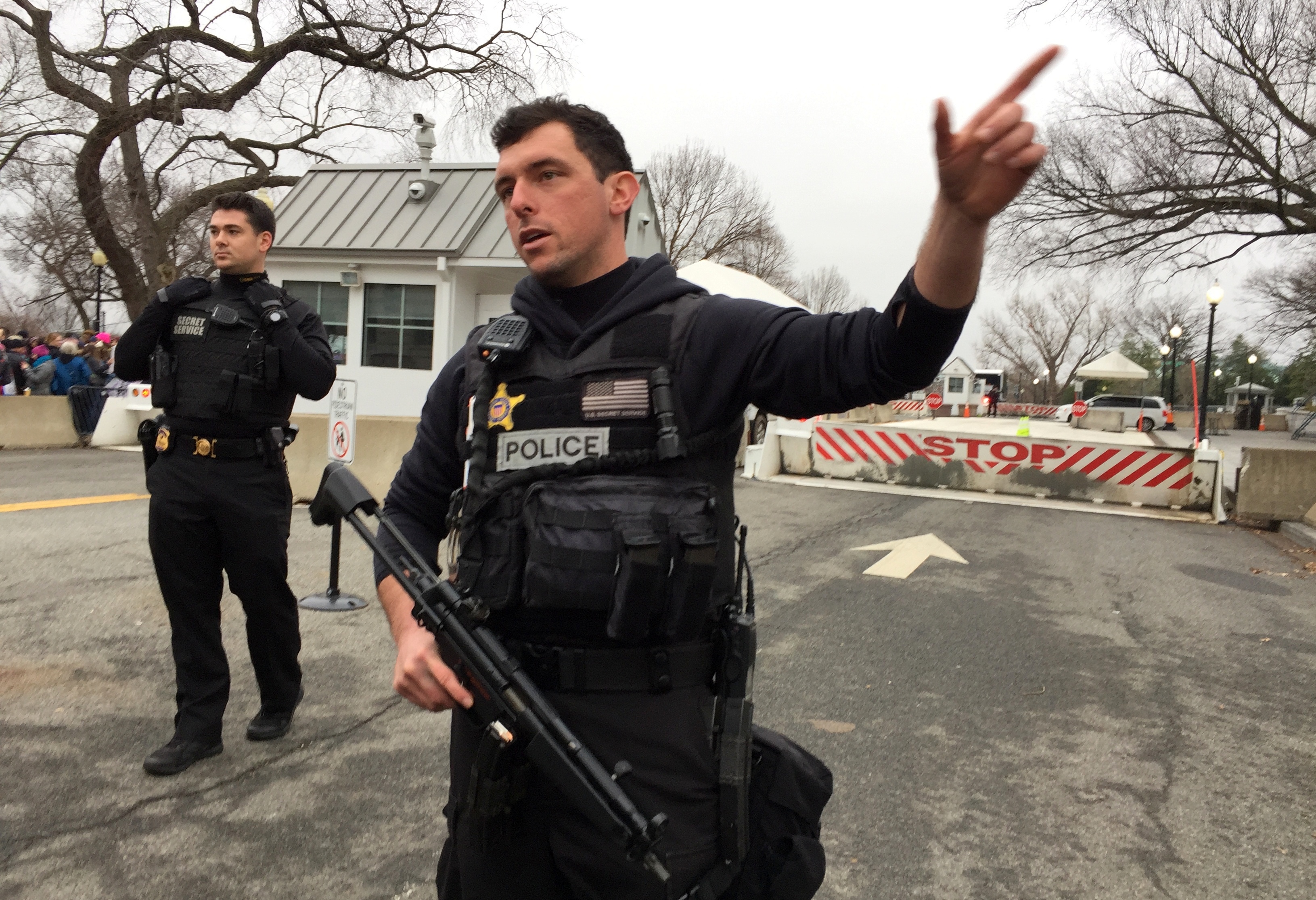 Marchers tried to get as close as possible to the White House but were turned away by Secret Service officers. (Tina Shen) 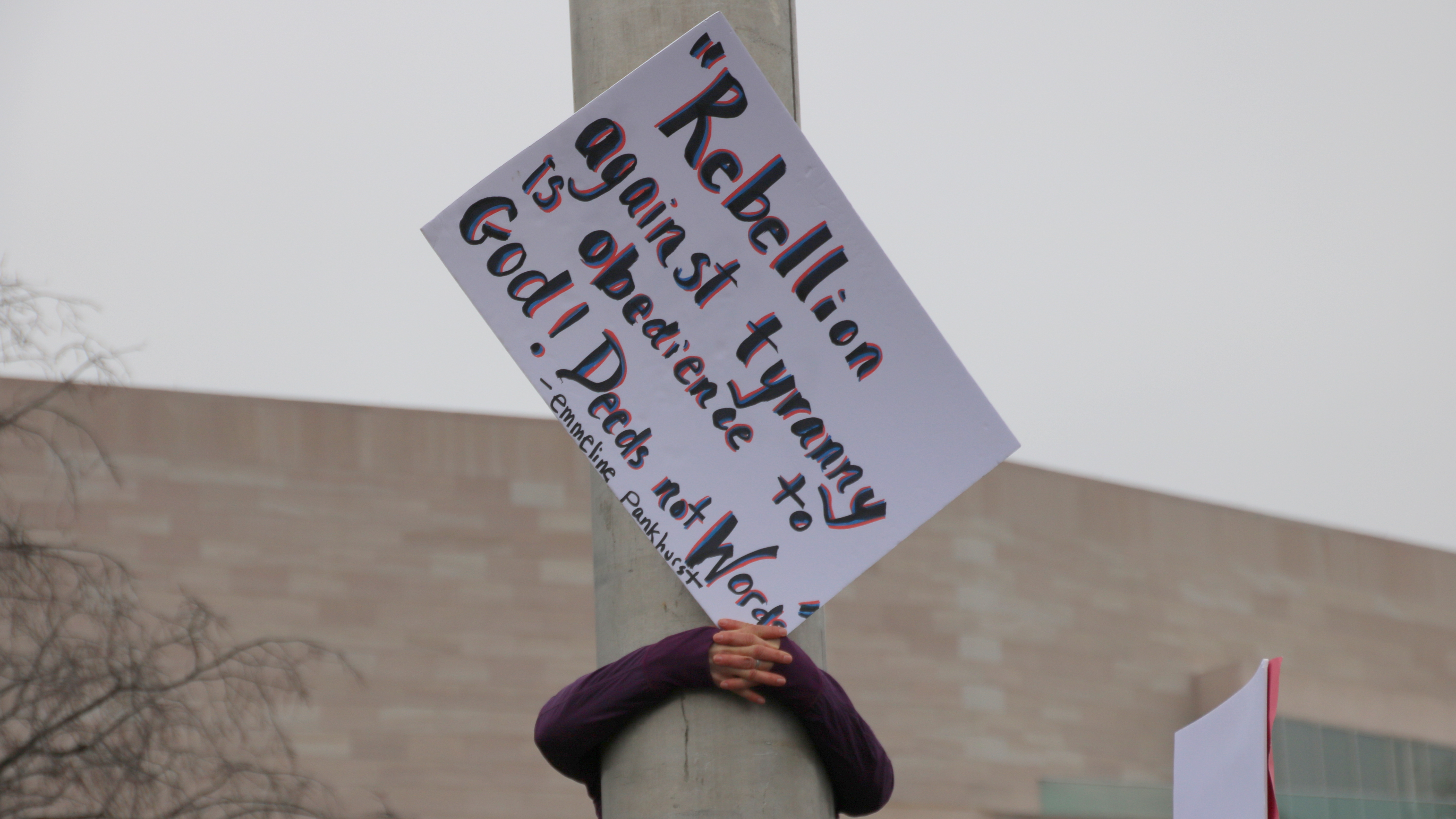 A woman climbed high up a utility pole to call attention to this message from British women’s suffrage leader Emmeline Pankhurst. (Fern Shen)