It’s a mystery to Zaid T. Degol why – one day, back when they were in the refugee camp in Ethiopia – her son, Natan Tsegay, suddenly could not stand up.

Natan had been fine a little over six years ago on the three-day walk that was the last part of the journey she and her children made to the border from their home in Asmara, Eritrea’s capital.

Life in the camp, a mini-city of Eritreans dwelling in tents and makeshift shelters formed by straw mats, was hard enough. But from the day when Natan pointed to his leg and said, “Mommy, it hurts,” her life had an extra-dire focus.

She found herself carrying the seven-year-old in her arms or on her back, getting him to a hospital in Addis Ababa and hovering over him helplessly as his infections worsened.

“The doctors didn’t know and I just say, it is the devil,” said Degol, today living in Northeast Baltimore with Natan, now 10, and his brothers Surafel, 7, and Neby, 5. 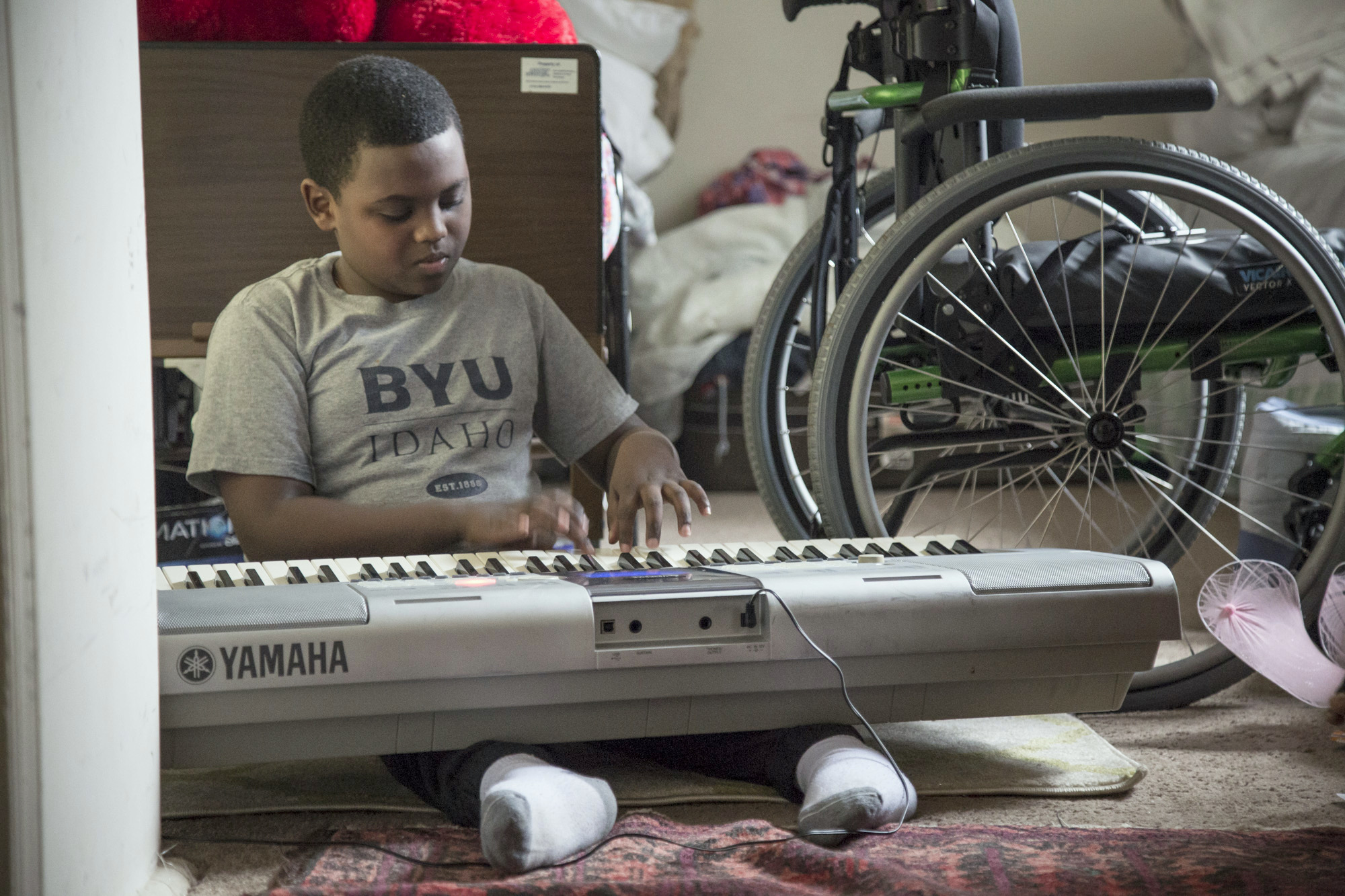 Natan Tsegay, now 10, has been unable to walk since falling ill in an Ethiopian refugee camp when he was 7. (Jennifer Bishop)

Telling the story with the help of a translator, Degol was asked about something that seemed like more than a mystery to the soft-spoken 35-year-old: How refugees like her could be seen as a danger to Americans.

Asked to comment on the fear of immigrants that seems behind President Donald Trump’s attempted ban on refugees and other foreign travelers, it was as if the question for her was incomprehensible. She could only speak of her own fear.

“Yes, I have a great fear of Donald Trump,” said Degol, whose apartment complex includes refugees from Sudan, Iraq and elsewhere. “We are all afraid he is going to send us back to our country where there is a war.”

“You Saved my Son’s Life”

The interview with Degol and her children was arranged by Aishah Alfadhalah, a volunteer “family mentor” who visits twice a week through the organization that sponsored them, the International Rescue Committee.

Degol, who understands some Arabic and uses it to communicate with the Kuwait-born Alfadhalah, lights up in the young volunteer’s presence.

“I am very happy to be in the U.S. I would like to thank God first and, next, all the American friends who are supporting me here, like Aishah, because they saved my son’s life,” she said, speaking in her native Tigrinya. “She is like my sister.”

Natan, a cheerful boy who moves by scooting across the floor, entertained visitors while his mother prepared traditional coffee and home-made Eritrean flatbread and orange wedges. 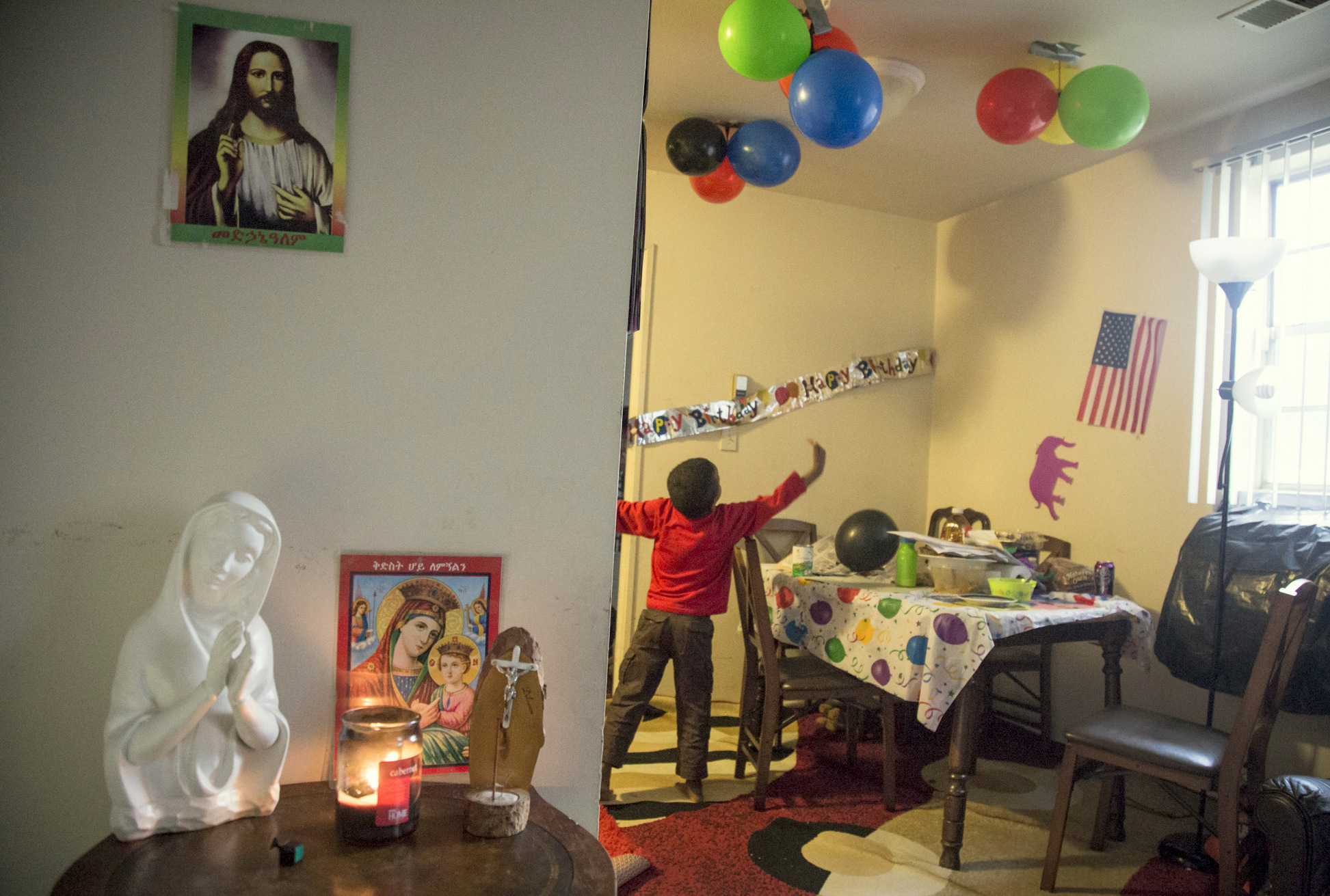 The family, like roughly half the population of Eritrea, is Christian. (Jennifer Bishop)

As a boombox played Christmas songs, the younger boys bounced around the one-bedroom apartment – a jumble of groceries, packages of Natan’s diapers and balloons from Surafel’s recent birthday party.

“Standing!” Natan announced proudly, showing off a cellphone photo of him erect with assistance at the Kennedy Krieger Institute, where he had two surgeries and is receiving physical therapy in hopes of some day walking again.

Natan showed other pictures, including Surafel dressed in a suit for his birthday party, and homework papers from Moravia Park Elementary where he and his brothers go to school and participate in after-school and summertime programs for refugee children.

At this point Degol set the boys up in the back bedroom with a video, lit a candle in front of a small tabletop Christian shrine, and poured coffee for her guests. A moment of peace and quiet.

While the future of Trump’s targeted travel ban plays out in Washington and the courts, life for this family is probably not too different from past generations of new Baltimoreans who came to escape hard times in other countries.

“Still after almost two years here, I really only know this place and the [Johns Hopkins] Hospital,” Degol laughs. “I only got very lost on the buses once!” 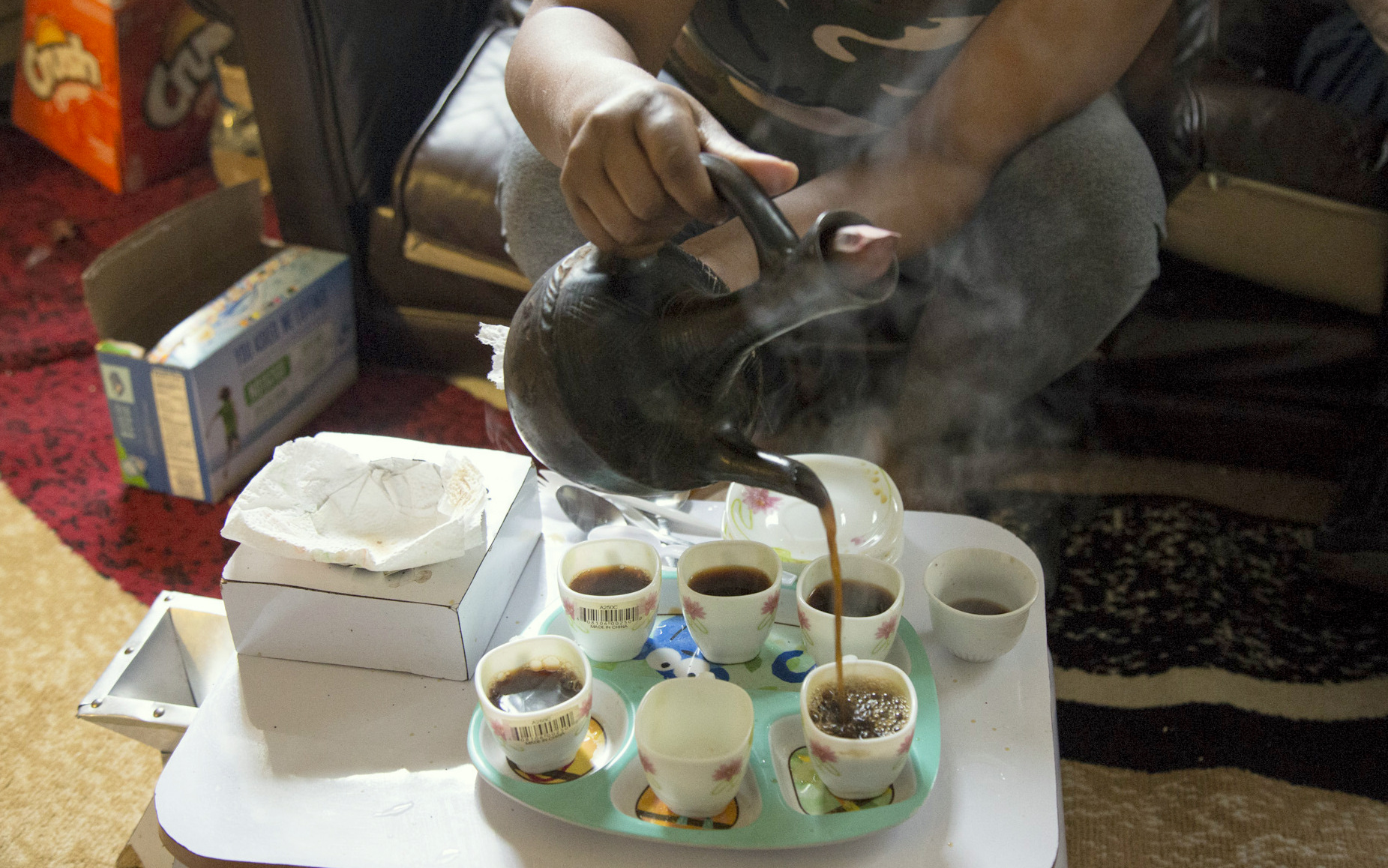 She is taking English classes three times a week and has come to rely on neighbors with cars to drive her to the supermarket or to a church service for Ethiopians and Eritreans.

Eritrea, an isolated, secretive country located on the Horn of Africa, has been under emergency rule since 1998.  The United Nations has accused its government and president, a former rebel leader named Isaias Afewerki, of crimes against humanity, including indefinite conscription, torture and mass surveillance.

“Some of her family members were arrested for not going to the army. There is no freedom there,” said translator Daniel Solomon, who spent years in the same refugee camp as Degol.

“The camp is in the hot desert. There are snakes and scorpions where you sleep. Many people have malaria.”

Help from Programs and People

Degol’s approval to come to America followed a five-year vetting process that started with UNICEF and JVA, the Joint Voluntary Association, a refugee-processing agency, and ended with the U.S. Department of Homeland Security.

Perhaps, she speculates, she received some priority consideration because of Natan’s medical issues and because she is a single mother. (She is divorced.)

Degol is now working through the paperwork to get a green card and assistance from an array of agencies. She covers her rent, food, utilities, clothing and other needs from her monthly $600 in cash assistance and $450 food stamps as well as Medicaid benefits received because of Natan’s disability.

Medicare covers Natan’s medical treatments, therapy and transportation to and from the hospital. The IRC has helped Degol apply for discounted utility bills. Alfadhalah has helped by getting discounted Internet accesses and a computer, scheduling medical transportation rides from Medicare and helping the boys with their homework.

Degol knows it’s a lot of help, but says she couldn’t get by without it. 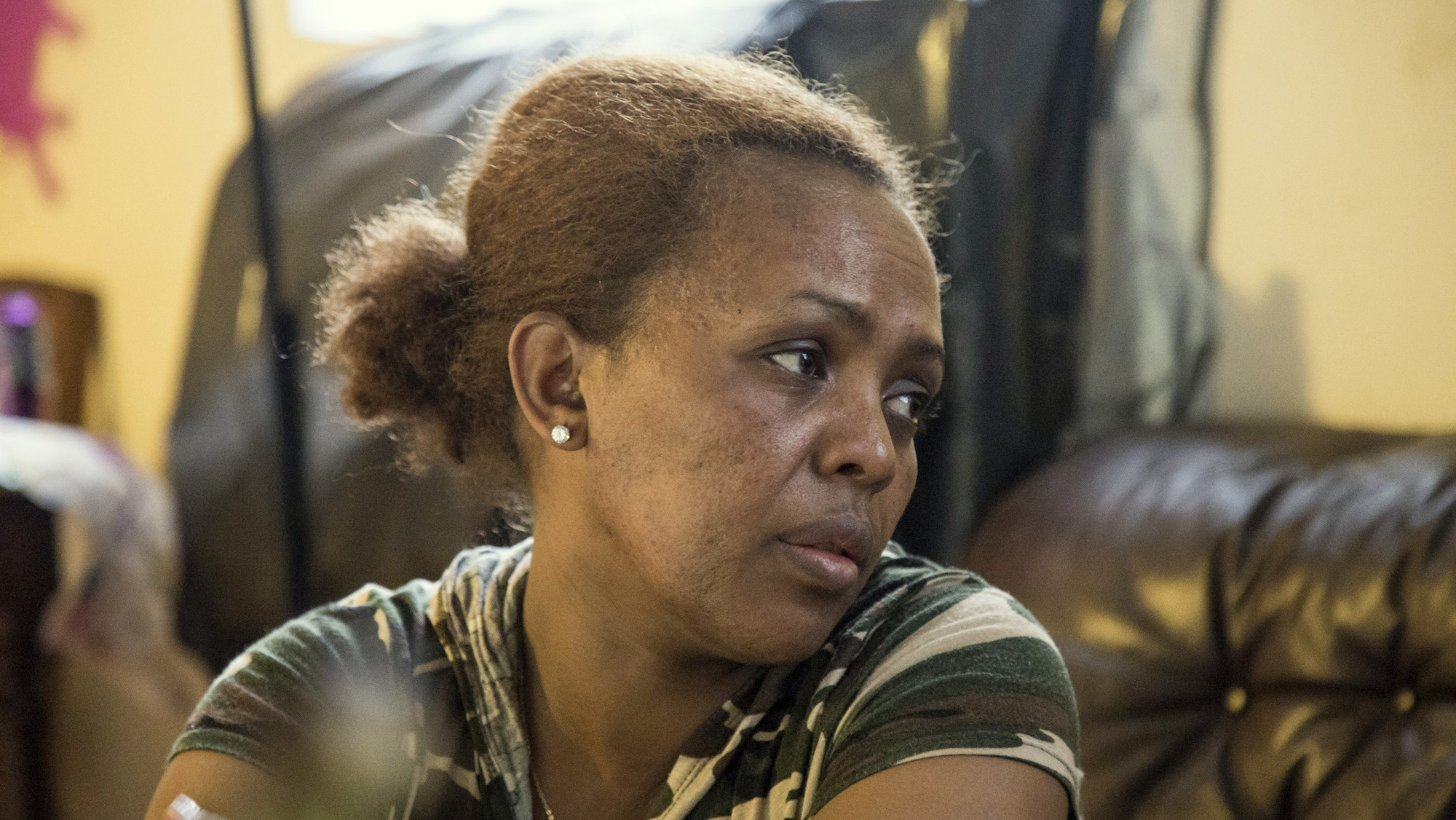 “I miss a lot,” Degol said, reflecting on the life she left behind in Eritrea when she fled to the United States. (Jennifer Bishop)

“Until Natan is better and I don’t have to take him to the doctor so much, it’s all I can do,” she said. “If he gets better, then I would like to get a job. I would do anything.”

The IRC, which has resettled over 20,000 refugees in Maryland over the last 17 years, is also sensitive to public concerns about refugees’ dependence on public aid. Of all the families they have resettled in that time, “over 85% have become employed and successful providers for their families within their first six months in the U.S.,” says IRC Maryland executive director Ruben Chandrasekar.

Independence is what she hopes her children will have some day: “I want them to get an education so they can support themselves.”

A more short-term goal for Degol?

Fixing her own aching back.

“Every night I can’t sleep,” she says, rubbing her lower back which has been severely strained by years of lifting and carrying Natan in Ethiopia and in the U.S.. Even now, although she has a wheelchair for him, it is difficult to lift the 10-year-old in and out of it.

And since their apartment building has no elevator, she must maneuver the wheelchair out the door of their first-floor unit and down multiple steps to get it outside. Then she goes back in and carries Natan down the steps on her back. 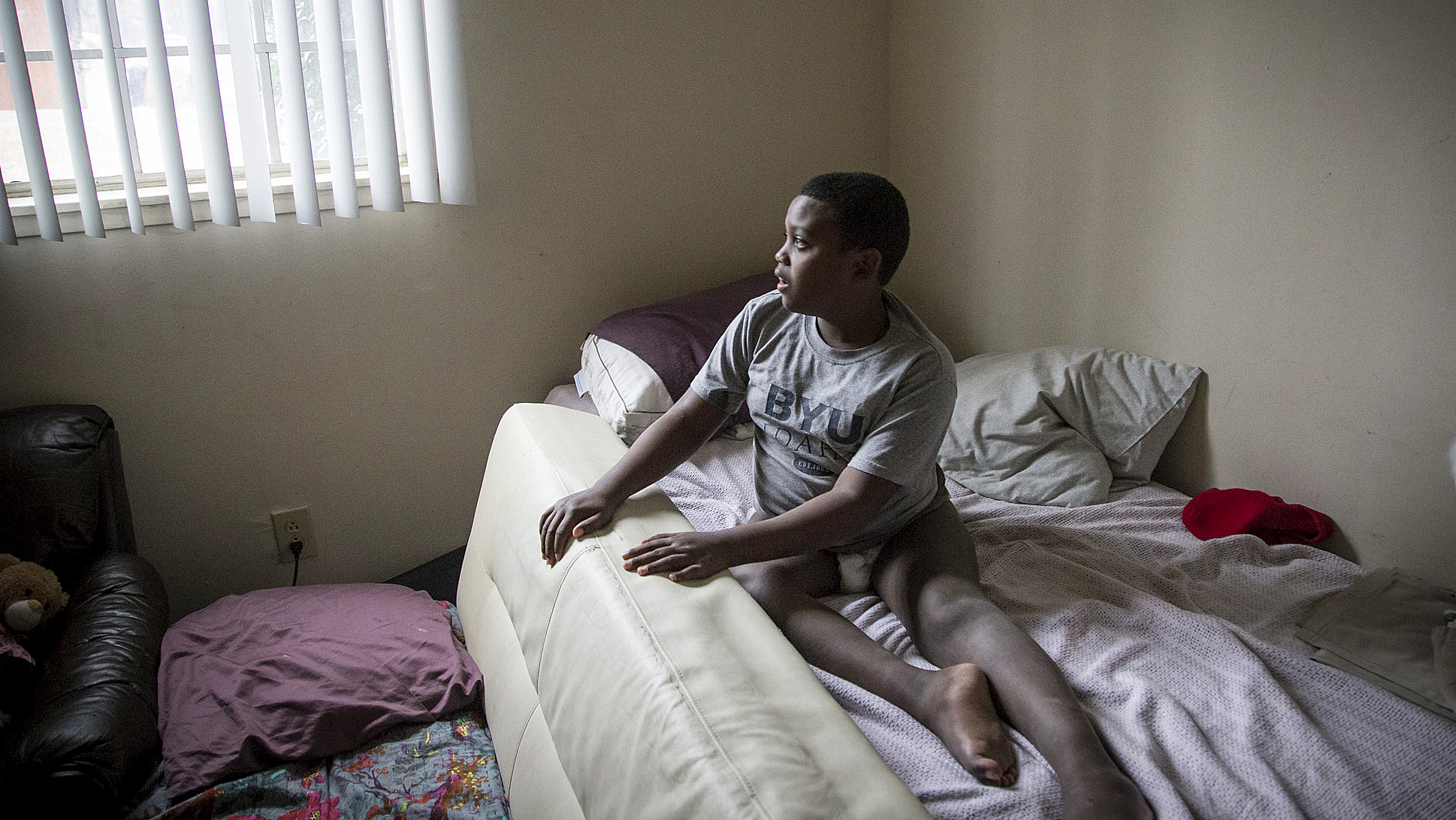 Natan on a Sunday morning at his family’s Northeast Baltimore apartment. (Jennifer Bishop)

Doctors have prescribed a supportive waist belt and are discussing other strategies. But really, she said, what she needs is a wheelchair-friendly apartment. Or just some kind of ramp.

“A ramp! Let me think,” Alfadhalah said, excited to hear of this new way to help. The translator, Daniel Solomon, took up the challenge too.

“Don’t worry, Zaid,” Alfadhalah said with a smile. “We will make it happen.” 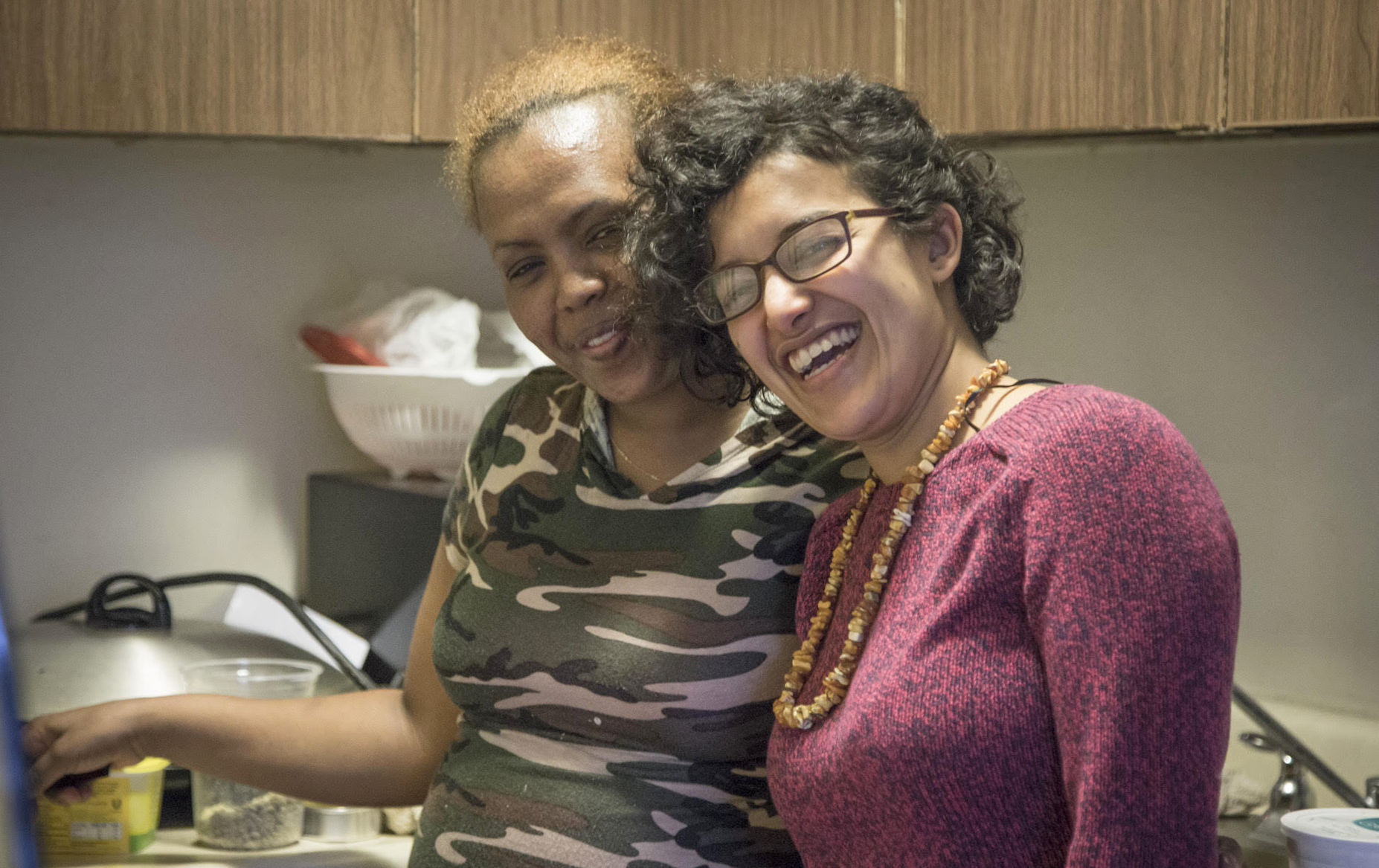 Zaid and Aishah: “She’s like my sister!” (Jennifer Bishop)