Kevin Plank’s new Sagamore Pendry Baltimore, where a night in a standard room will set you back about $400, opened this week in Fells Point’s old Recreation Pier after a $60 million renovation.

On a recent night, a few wobbly steps away from the hotel, Terri Rychlak held court in the Cat’s Eye Pub, the quintessential, sloshed-beer scented 1970s-era Fells Point blues-band bar.

“I’m surrounded by idiots, and I am their queen,” said Rychlak, who has been slinging pints and attitude at the Thames Street fixture since 1984.

Rychlak was sanguine when asked about the future of the Cat’s Eye and its famously funky waterfront neighborhood, amid condominium projects, new boutiques and restaurants and a spate of other upscale developments in addition to the Pendry.

“I’m as nostalgic as anyone else, but you can’t make money that way,” said Rychlak, who at this stage has only a few short-term gripes about the shortage of parking spaces.

Will newcomers from the swanky hotel, which held a VIP ribbon-cutting ceremony yesterday, patronize the down-home Cat’s Eye?

“This is a very real bar,” she observed. “And I think they’ll get sucked into this place.”

Fell’s Point has survived an invading British fleet during the War of 1812, centuries of industrial pollution, hurricanes, extended periods of derelict obsolescence and an ill-fated plan in the late ’60s to run a highway right through the community’s narrow, Belgian-block-paved streets and late 18th and early 19th century brick rowhouses. 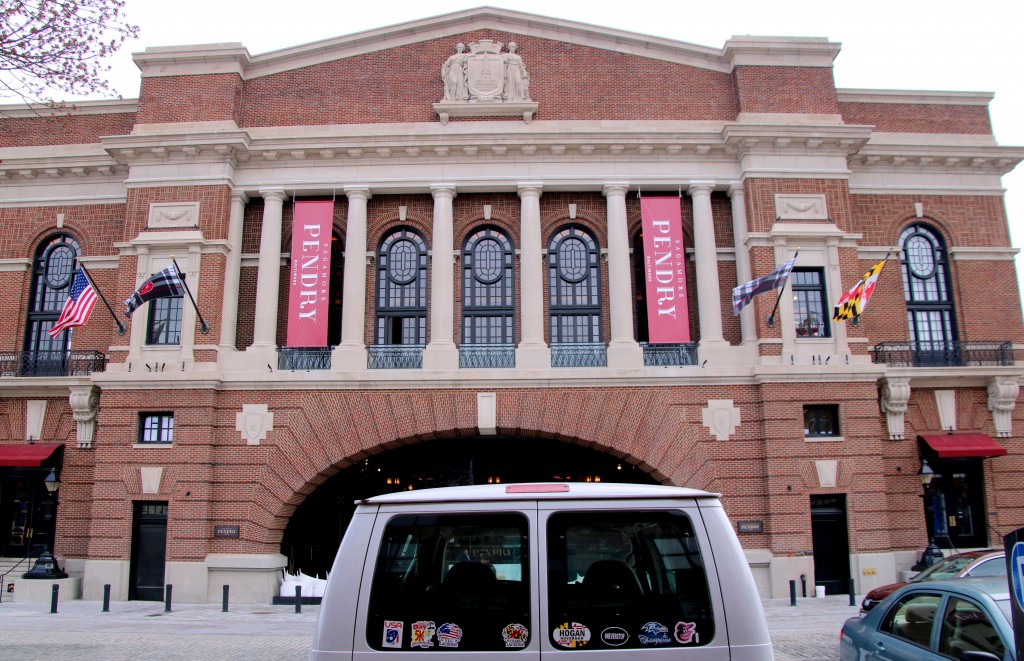 After a $60 million makeover, the old Recreation Pier is now home to the luxury hotel, Sagamore Pendry Baltimore. (Fern Shen)

Now a new series of changes – capped by the Under Armour CEO’s makeover of the once public Rec Pier into a private hotel – has residents experiencing a mix of skepticism, weariness and cautious optimism.

It’s a familiar feeling in a neighborhood that has endured repeating cycles of betrayed trust and recklessness on the part of industry, city officials and developers.

There was the string of mysterious fires along the waterfront starting in the 1950s that cleared the way for new development. There was the alleged skirting of potential environmental and health concerns by developers of the Allied Chemical site at Harbor Point.

Lately, in addition to the hotel opening, Broadway Square is undergoing $3 million in renovations expected to last until September. With city-owned public markets getting makeovers across the city, the Broadway Market is due for big changes too. 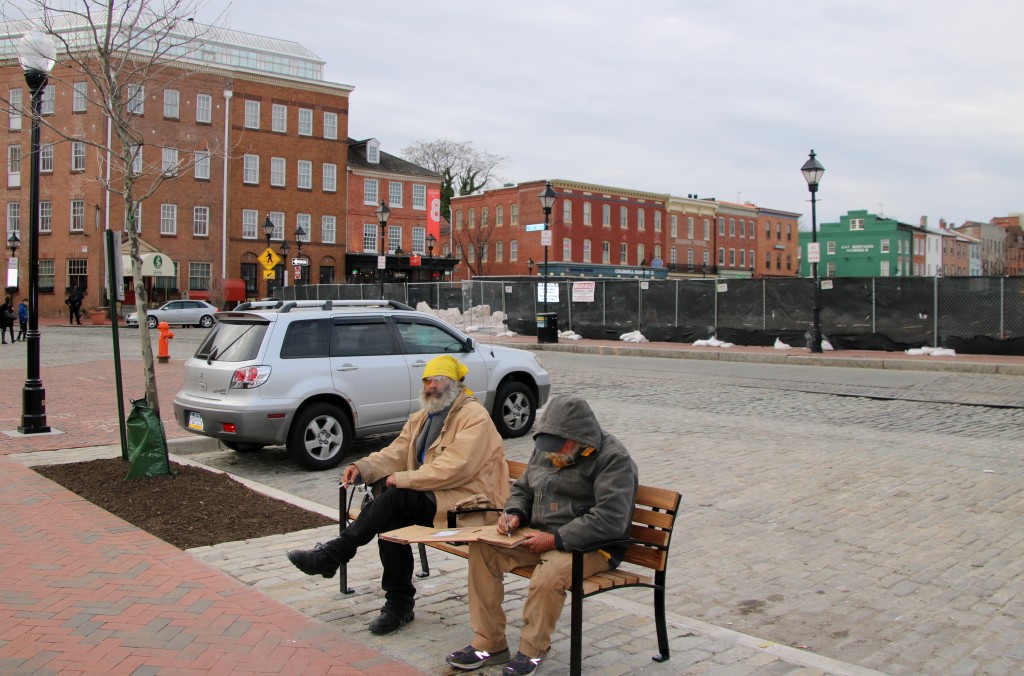 Broadway Square, fenced off for a $3 million renovation to continue through the summer. (Fern Shen)

Fells Point’s seedy charm has attracted celebrity habitues like filmmaker John Waters and the cast of NBC’s “Homicide: Life on the Street,” which used “the Rec Pier” as the 1990s show’s police headquarters.

But these days, surveying the neighborhood’s dive bars, dusty vintage shops and panhandlers, locals debate whether upscale changes are the kill or the cure. Meanwhile, familiar Fells icons fall.

Jimmy’s Restaurant, the greasy-spoon at the base of Broadway favored by former Senator Barbara Mikulski and other pols, is being totally overhauled under new owners – its humble white Formica counter to be replaced by one of granite. Where gritty Leadbetter’s Tavern stood for nearly 60 years, the patrons of Rye now sample boutique cocktails.

Into this fraught history sails the 128-room Sagamore Pendry, a collaboration between Kevin Plank’s Sagamore Development Company and California-based Montage Hotels & Resorts, which owns the Pendry label. (War Horse LLC, owned by Plank’s brother, Scott Plank, is also a partner in the project.)

The suites surround an open air interior courtyard, a grand staircase leads to an ornate ballroom and there’s an outdoor pool-bar with cabanas at the end of the pier. The exterior retains many of the signature features of the 1914 Beaux Arts building, including the graceful brick arch.

The designers have tucked in nods to Fells Point’s history as port of call (pillows decorated with sailor tattoos), Plank’s interest in thoroughbred racing (a 3,500-pound bronze horse sculpture by Colombian artist Fernando Botero) and Fort McHenry across the water (latticed patterns on the elevators meant to evoke images of bombs bursting in air).

Speakers at Tuesday’s ribbon-cutting took pains to note the building’s past incarnations as storage for port cargo, a community hall for immigrants and a children’s recreation center. 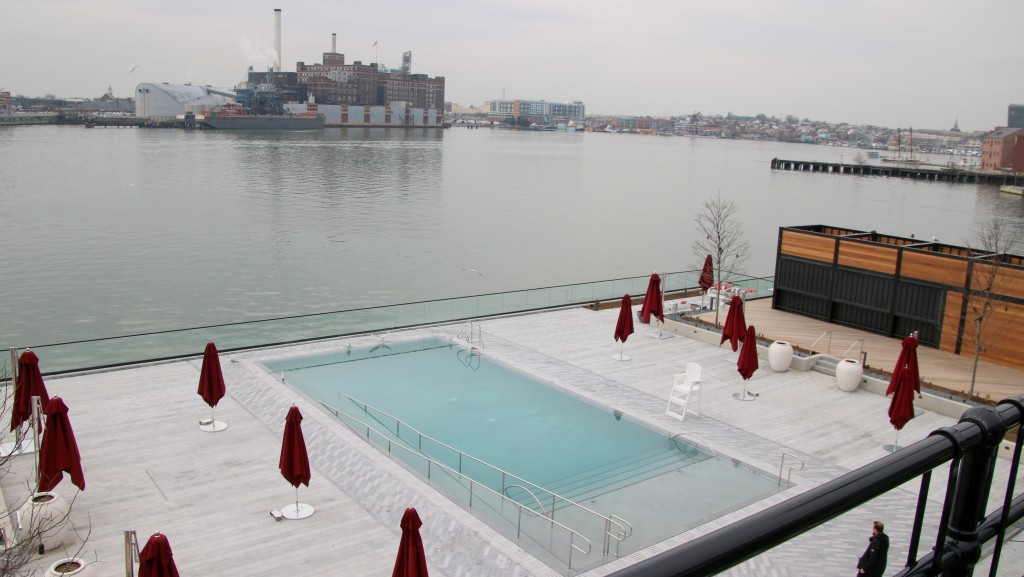 At the tip of the Recreation Pier, where city children played tag, a pool and cabanas. (Fern Shen)

Across the street at the Cat’s Eye, barkeep Rychlak noted that the Sagamore Pendry concierge has visited the bar to scope it out as a recommendation for hotel guests.

“We’re excited for the new customers,” said Rychlak. “We don’t care what you do, wear or drive, we’re all just people.”

“And ‘asshole’ is a term of endearment here,” she added.

She was interrupted by an elderly customer across the room who raised his glass to her in recognition.

“I thought that guy was dead,” Rychlak said quietly.

The Funk and the Food Market

Among Fells Point’s longtime community organizers and preservation watchdogs, there is more worry. Joanne Masopust fears that the hotel will complete a transformation already underway from a community of local characters into a generic place for tourists to eat and drink.

People live there too — and need practical amenities like a library and a proper food market, said Masopust, a 37-year resident and president of the Fell’s Point Community Organization. 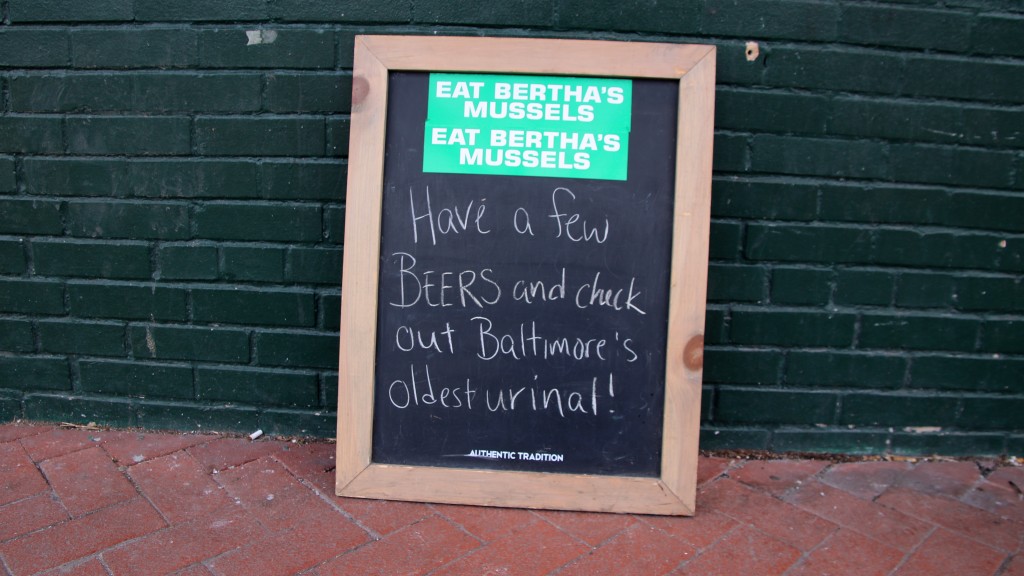 While she thinks the renovations to the hotel are “incredible,” Masopust wonders if it’s the best thing for the community as a whole.

“Not everybody wants everything to be upscale,” she said, observing that she and other community leaders, worry about the neighborhood “losing the funk” and are “trying desperately to keep what we all fell in love with in Fell’s Point.”

“Anybody who comes in really ought to be doing things that enhance Fell’s Point’s core identity,” said Masopust. “They’re angling for trendy, but trendy comes and goes.”

“The More Tourists, the Better!”

The Brew sat recently with Glenn Moomau at a table in Penny Black, the new restaurant and bar located on the corner of Thames and Ann Streets. Moomau is a college professor and harmonica player with a standing Friday night gig at Bertha’s Restaurant and Bar. He has lived above the bar since 1990.

Moomau was, by turns, optimistic and ambivalent about the latest wave of change sweeping through.

“I look out my window across Broadway Square, and I used to see the old Port Mission that ministered to the winos and other folks who were struggling,” he said. “Now it’s just retail. It’s certainly good for my pocket as a landlord, but the focus of the neighborhood has changed. There used to be room for everybody here, the disenfranchised, the disaffected–”

“And the infected!” interrupted Chuck Doering from across the table.

Doering was the original owner of the bar, then known as John Stevens and opened in 1977. Doering recently partnered with his wife Melissa and children Eliza and John to retool the bar, which now features a colonial tavern feel and refined pub grub.

“I guess I don’t like to see one person control so much,” Moomau said of Plank, whose reach now extends across much of the post-industrial Baltimore waterfront. There’s Under Armour corporate headquarters at Tide Point, the Under Armour brand store in Harbor East and the massive planned mixed-use Port Covington development. 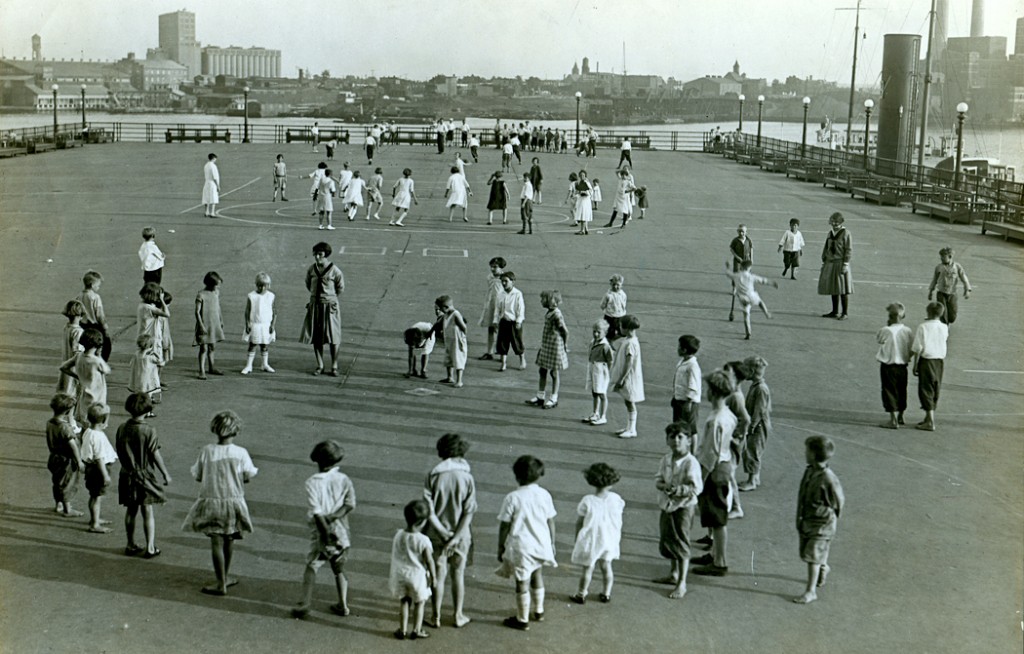 While pouring pints, Eliza was unequivocal in her enthusiasm for the new hotel, other development in the neighborhood and her bar’s place in the midst of it all.

“It’s exciting to think about what’s going to happen here now,” she said. “Most bars on Thames have live music, so if tourists are looking for something more low key they’ll come here.”

Moomau cautioned against Fell’s Point becoming Plank’s version of the Inner Harbor (“the Inner Horrible,” as he called it.)

That prompted the pair to muse about Plank’s motives for putting so much money into a costly project that flummoxed previous developers and could take many years to return its investment.

“Maybe he used to come into John Stevens and get shit-wasted,” Chuck offered, before heading outside for a cigarette.