Several clutched almost identical photos, showing cracked water meters choked with trash and debris. Many were carrying water turn-off notices, plus handwritten notes of all their interactions with the Department of Public Works (DPW).

And almost everyone held the water bills themselves – showing charges they said they did not owe and could not afford.

“If you have irrefutable proof and the bills keep coming, what do you do? I’ve called all the numbers,” said Rojamie Oyenuga, of West Baltimore. “It’s more than my mortgage!”

Last May, before Baltimore raised water and sewer rates and instituted a monthly rather than quarterly billing system, Oyenuga received a $163.74 quarterly bill. Then, no bill for several months. Then came a monthly bill of $1,331.48 showing her usage had drastically increased.

“There’s got to be problems with the meters,” said Oyenuga, who has been in her home for five years and has two young children. “It suddenly showed me using tons of water.”

Oyenuga was one of scores of city water customers who filled City Council chambers to capacity last night for a hearing on unusually high water bills, missing bills, erroneous bills and changes in the system of contesting them.

“I’ve got 14 sheets [of names] here,” said City Council President Bernard C. “Jack” Young, as the witnesses who had signed up began stepping before the microphones to address the Judiciary and Legislative Investigations Committee.

Oyenuga was one of those who opted to go into a back area where DPW workers with computers were stationed to help customers with their specific billing issues. She spoke with The Brew while waiting for her name to be called.

Violating the Right to Due Process?

Advocates for water customers have been reporting problems ever since the city eliminated the old grievance process. Under that system, the customer could come in, with an attorney if they wished, and have their case heard by an independent third party.

Now customers must fill out an online form asking for an adjustment to their account.

The in-person hearings are no longer necessary, DPW officials have argued, now that the city has begun using its so-called “smart” water meters, providing the city and customers with vastly more information online.

Charlotte Clarke, a staff attorney at St. Ambrose Housing Aid Center, says the new process is not clearly explained and not transparent and does not take into account each customer’s unique situation.

“Every single property is different,” said Clarke, addressing the committee. “Checking boxes on a form is not enough.” 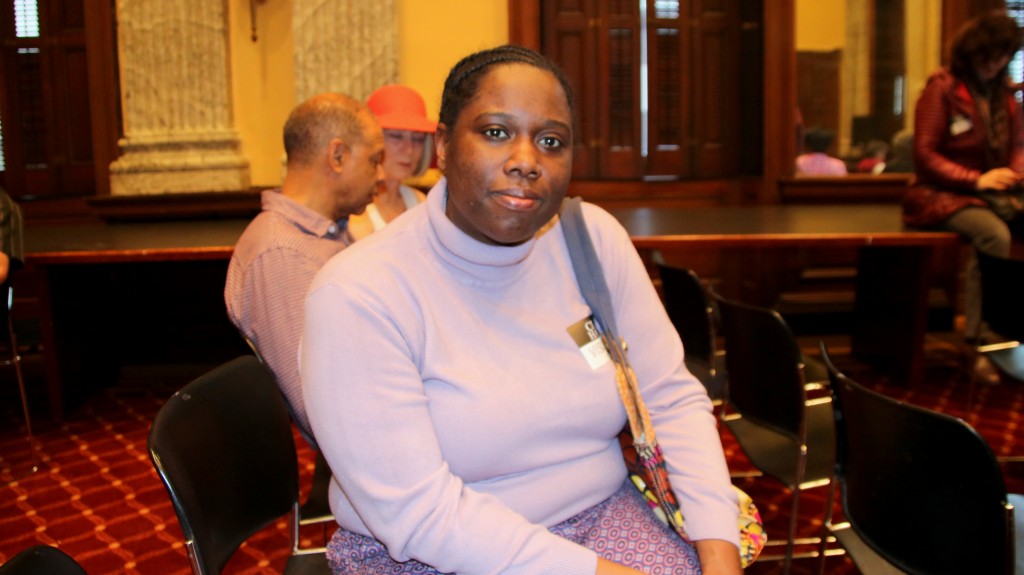 Rojamie Oyennuga, of West Baltimore, awaiting help with a water bill she says is high – and not accurate. (Fern Shen)

Komal Vaidya, a teaching fellow at the Community Development Clinic at the University of Baltimore School of Law, went a step further. She said removing the hearings ignores citizens’ right “to constitutional due process.”

Vaidya, Clarke and other customer advocates said the new billing system, instituted in October, is still rife with inaccuracies.

“I have serious concerns about DPW’s ability to account for and keep track of customers’ usage,” Vaidya said. “I would like to dispute that the amount customers are billed reflects their actual consumption.”

Clarke related the saga of one client whose quarterly bill last September had been $7,000 and then, in February, received a bill of more than $40,000.  A turn-on, turn-off test was conducted and then a meter field test.

But the city employee who conducted it “did the investigation on the wrong meter and that was uploaded onto my client’s account,” Clarke said.

A plumber certified there were no leaks but there were continued problems when DPW returned to conduct the meter field test again.

“For the second time, DPW tested the incorrect property,” Clarke said.  The client was told “the wires were tangled.”

DPW returned again, Clarke said, “and then for the third time the incorrect property was tested.”

Oyenuga, like the advocates, said she has come to mistrust DPW and is afraid to accept the one-time reduction she was offered under the new system.

“They said they only offer the reduction once every two years,” she said. “I would rather find out what is really going on with my bill.”

Oyenuga doesn’t want to get locked into monthly billing that, she estimates, would mean $15,000 a year for her to receive city water and wastewater services.

“That’s a little bit daunting,” she said, flipping to the part of the bill that warns that customers with unpaid bills are subject to having a lien placed on their property.

“People have a right to water,” she said. “It’s almost like they’re taxing people out of their homes.”

Chow: “Listening to our Customers”

DPW director Rudy Chow explained, as he has before, that there had been “glitches” as the agency worked through the process of transitioning from an antiquated system to a modern one.

Since then, he said, the problems have been largely corrected.

“We’ve been very aggressive about building transparency, we’ve been listening to our customers,” he said. “We are committed to being the best of the best.” 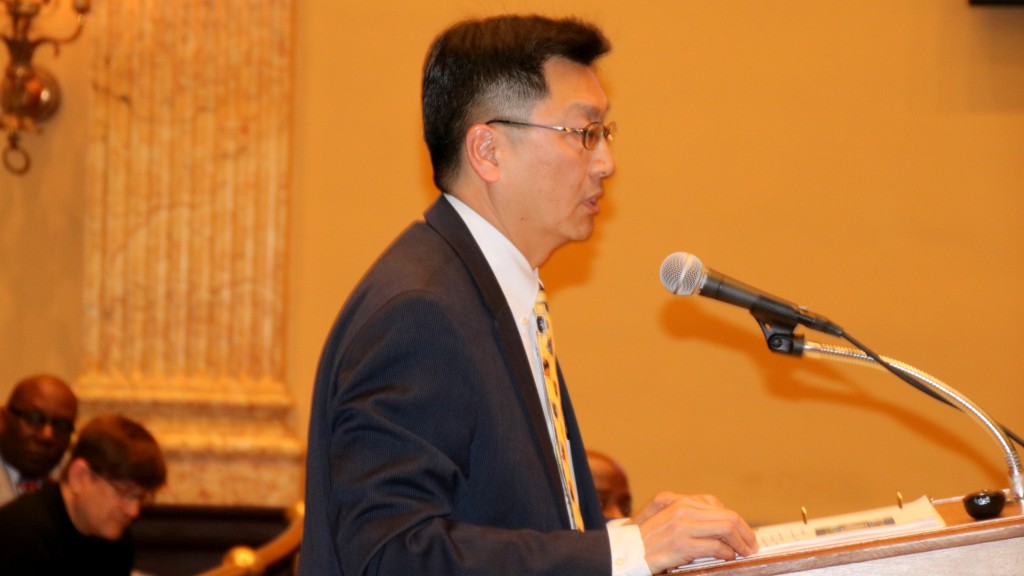 The advocates said they understood the challenge of what DPW was taking on, but still found problems related not so much to technical issues but to the agency’s unwillingness to engage with them.

Ellyn Riedl, a member of the Tax Sale Work Group, said DPW at first was working with the group to discuss the growing number of delinquent water customers losing their homes from tax liens.

“At first, the meetings showed progress but then they became less and less productive,” said Riedl, of the Maryland Volunteer Legal Service.

One question the group sought clarification on was the existence of a $50,000 hardship fund set aside for people with difficulty paying the cost of water breaks on their property.

“That was the first the advocates heard about this fund,” Riedl said. “How do you qualify for these funds? There was no policy in place.”

They never received an answer, “the meetings ended up breaking down and the five [city] representatives stopped coming,” she said.

Chow explained that the city “funneled some money over to that fund,” which he said is handled by HomeServe, the private company the city partnered with to provide pipe insurance.

“We wanted to make sure we don’t handle that cash,” Chow said. “Home Serve set up that fund voluntarily.”

As for how one qualifies for the fund, Chow said “the criteria is about income.”

Asked if that information is available online or obtainable, Chow answered “at this time, we don’t have written criteria.” 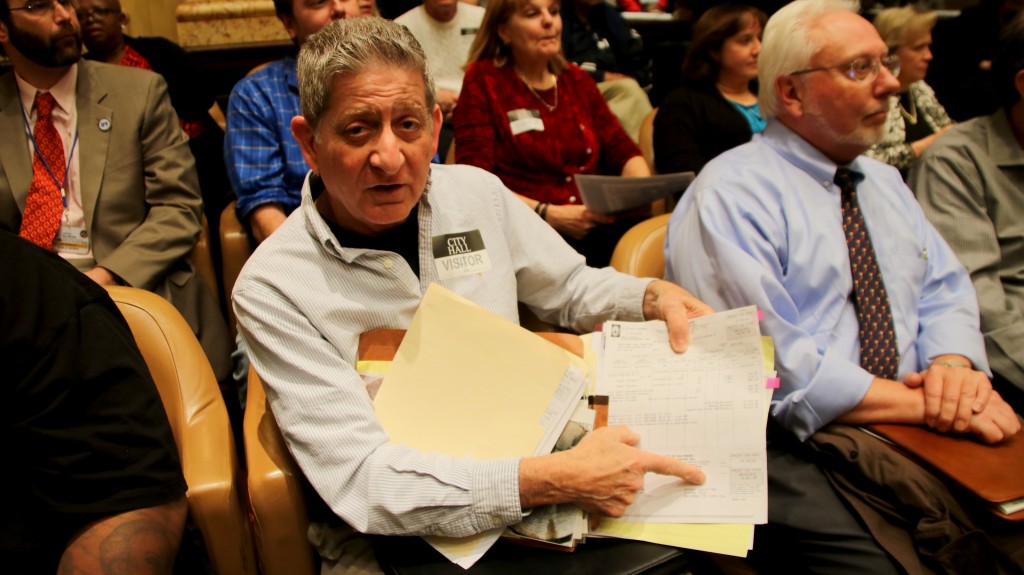 Sal Sabatino came to the hearing with bills going back to 2004. (Fern Shen)