They were no problem for union organizer Aletheia McCaskill last winter – she was so excited to be knocking on doors for mayoral candidate Catherine Pugh, who had pledged to sign a bill to increase Baltimore’s minimum wage to $15-an-hour by 2022.

That was before Pugh won the election, was sworn in and announced last week she would veto that very bill.

“I had to pick my heart up off the floor when I heard. I am so disheartened. I’m so sad,” said McCaskill, a precinct captain for SEIU 500, the Service Employees International Union.

Not just union foot soldiers like McCaskill and her teams of canvassers but high-level union leaders say they were blind-sided by Pugh’s reversal on this top-priority bill – and by the erosion of support for an override in the City Council.

“I thought with this new City Council there would be a lot of changes.”

Recalling his union’s interviews of the mayoral candidates before endorsing Pugh in the November general election, Grecco said, “Her interview was the best.”

They also had, in black and white, Pugh’s answer on the $15 minimum wage hike part of the candidate questionnaire: When the bill “reaches my desk, I will sign it.”

Committing to Pugh, labor gave her not just shoe-leather commitment and high-profile endorsements, but also boatloads of money.

“Between the laborer’s union and SEIU, we spent nearly a million dollars on her,” said Mark McLaurin, the SEIU 500 political director. McLaurin was referring to LiUNA, the Laborers International Union of North America.

McLaurin said he is convinced that “she would not have won without us.”

The PAC supported a slate of City Council candidates, but it gained notoriety by targeting then-front-runner Sheila Dixon.

One flier altered a photo of Dixon to look like a mug-shot. An online ad depicted her as “the Grinch who stole Christmas.” (Both were references to the former mayor’s resignation in 2010 after her conviction on an embezzlement charge for taking gift cards intended for poor children.) 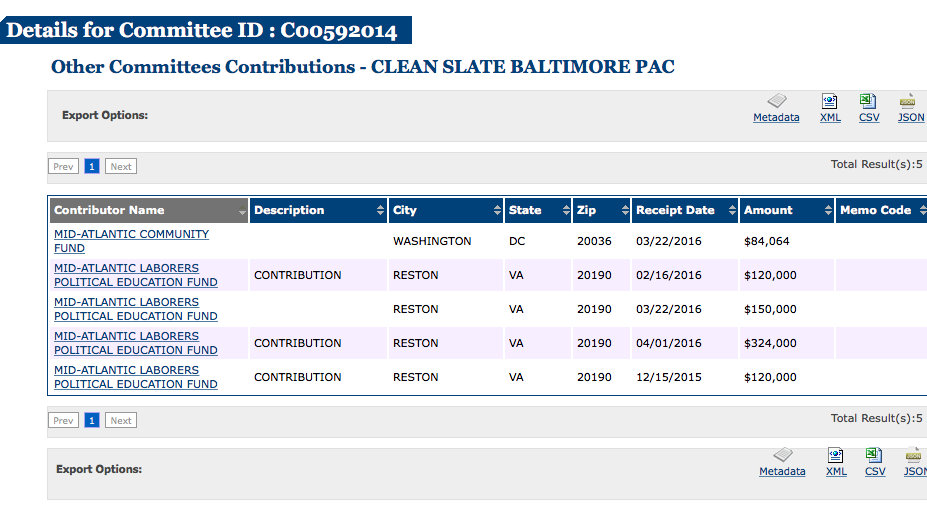 Contributions by the Laborers International Union of North America (LiUNA) to the Clean Slate PAC.

The Pugh campaign said at the time it had no connection to Clean Slate and denounced the ads and mailers as “ugly and distasteful.”

Dave Allison, business manager for LiUNA’s Baltimore Washington Council, did not return a call seeking comment for this story.

Friend to Labor? Or Tied to Business?

For the union leaders, who led a “Fight for 15” coalition that included social justice, community and faith groups, what is the take-away after their million-dollar candidate turned on them?

It depends on who you talk to.

Grecco acknowledged that, because members were divided, none received the AFL-CIO’s endorsement in the primary (a 2/3 vote is needed). But he defended their decision to support Pugh.

“She’s been a good friend to organized labor, this is the first time I’ve disagreed with her,” he said.

McLaurin blames Pugh’s reversal on the pro-business-proclivities of the people around her, specifically James T. Smith Jr., Pugh’s chief of strategic alliances, and Karen Stokes, the mayor’s director of government relations.

“We didn’t know we had to keep watch on her, check on her every hour on the hour,” he joked. 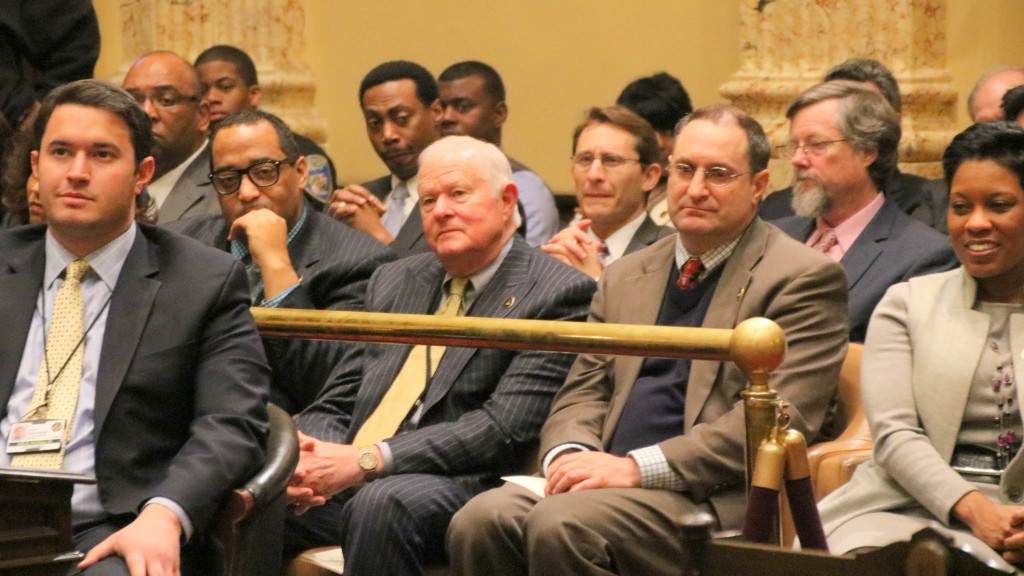 Others said Pugh’s ties to business, developers and prominent lobbyists, who also contributed generously to her campaign, were obvious to anyone paying attention in Annapolis. (“She only seemed progressive compared to the people on her committee,” one of them remarked.)

Speaking with In These Times, Maryland Working Families executive director Charly Carter said the “Fight for 15” coalition would regroup if it couldn’t get an override vote.

The best approach may be to concentrate on making progressive gains in the 2018 statewide elections and to renew the fight at the state level in 2019, she told the website’s Bruce Vail.

Pugh has said she remains committed to the economic needs of citizens and was persuaded that raising the minimum wage to $15 an hour would hurt low-wage workers by driving employers out of the city.

She also cited a report that said raising city workers’ pay to that level would threaten the city’s finances.

Backers of the bill said those fears were unfounded or overblown and that the major impact of the gradual change would be to help tens of thousands of residents support their families.

Their hopes were lifted last month when the City Council passed the bill by a vote of 11-3.

Run Your own Candidates

If the Council doesn’t override Pugh’s veto tomorrow, does the failure of the union-led campaign for the second year in a row simply signal the waning political power of labor in a post-industrial city?

“But  I would not count unions out,” she continued. “In some ways, we’re seeing labor step back into importance, in Baltimore and in other cities like Baltimore.”

The work some unions are doing around social justice issues, low-wage workers, service sector advocacy, minimum wage, health care and other new economy issues, she said, is part of “a growing dissatisfaction with politics-as-usual.”

“If unions are nimble enough they can capitalize on that and be a force to be reckoned with,” she said. “They just have to start doing things differently.”

What does this mean when it comes to electoral politics?

“The message is, don’t trust the candidates that are out there. Run your own candidates,” said Bill Barry, retired director of labor studies at  the Community College of Baltimore County/Dundalk.

McLaurin said SEIU is trying to move in that direction.

“We’re looking to get candidates into the pipeline, get our members to run,” he said. “We need to do more of that – identifying community leaders who can get into office so we’re not always stuck choosing between the lesser of two evils.”

And what about Pugh’s re-election prospects, with a broken campaign pledge now part of her political resume?

“It’s disgraceful. And it’s going to dog her,” declared longtime community activist Ralph Moore Jr., who said the mayor’s explanations for the position change don’t hold up. “She knows better.”

Moore said people will remember – and unions will remind them – that Pugh missed a chance to make the kind of change many called for after the 2015 unrest following the in-custody death of Freddie Gray.

“It could have been the first big concrete, meaningful thing out of City Hall since then,” Moore said.

Kasniunas agreed that the veto “could be a huge blow-up and backlash against her,” but noted it happened early in Pugh’s administration.

“She could be counting on people to give her a break because she has a lot of challenges,” she said, “or just to forget.”