Tonight’s the night for the legendary Maryland Party, the annual fete where local and state politicians mix freely with steamed crabs, Casamigos tequilas and a who’s who of developers and donors three time zones away from home.

Over 2,000 real estate players – from brokers, attorneys and lenders to product suppliers, retailers and investors – have been invited to the Encore Beach Club, an emporium of cushy cabanas, baroque bungalows, gaming machines and live entertainment at the Wynn Las Vegas Casino and Resort.

The party takes place during the International Council of Shopping Centers RECon in Las Vegas, a four-day convention at which 13 Baltimore officials, led by Mayor Catherine Pugh, are now attending at a cost of at least $38,000.

(Nine of those officials have gotten approved travel and hotel expenses of $25,836 from the city, while four more, all from the Baltimore Development Corp., are paid out of the agency’s undisclosed internal funds. Other costs to the city would include BDC’s hospitality booth at RECon and partial sponsorship of the Maryland Party.)

So, too, is BDC president and ex-Councilman William Cole, and Ed Reisinger and Sharon Green Middleton, the respective chairpersons of the City Council’s Land Use and Taxation & Finance committees.

Maryland Gov. Larry Hogan, fresh from a fundraiser at a private villa attached to the Wynn, will be in attendance, as will former Baltimore mayor and current political consultant Stephanie Rawlings-Blake and former Maryland Attorney General Doug Gansler.

He told the Baltimore Business Journal that it’s just him and Arnold Jablon, director of permits, representing the county at this year’s RECon.

Baltimore County has a large menu of development projects. They include the billion-dollar rebuilding of the Sparrows Point steel-mill site into a tidewater trade and distribution hub, and the tricky question of how to re-start Towson Row, the $350 million mixed-used complex that sits unfinished and forlorn on the southern edge of downtown Towson.

For  the city, Mayor Pugh plans to focus on neighborhood corridors that have seen little or no growth in years. She said she wants to try to attract grocery store chains to Baltimore’s “food deserts,” a perennial hope of City Hall that has so far succeeded in luring a ShopRite store onto Liberty Heights Avenue.

The BDC, according to spokeswoman Susan Yum, will be assisting the mayor by “making connections and providing information to retailers about the different locations and options available in the city.” 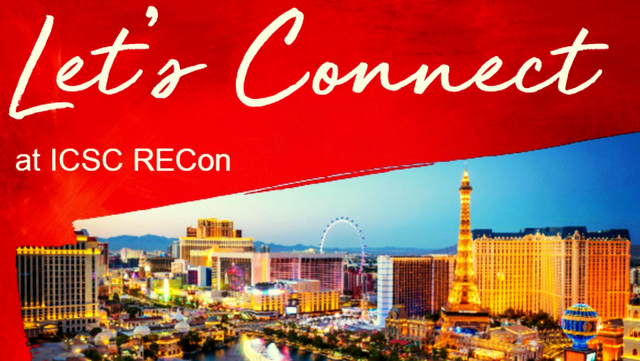 Pugh told reporters last week that she has another priority.

“I have specific asks around more theaters and bowling alleys. I don’t know who we’ll get for those things, but I do think the city deserves them.” Pugh arrived at the Wynn Las Vegas yesterday after Saturday at the Preakness. She plans to depart tomorrow with her aide, Afra Vance-White.

Left to its own devices, based on Pugh’s remarks, is New Port Covington, the proposed $5 billion mega-complex along Baltimore’s Middle Branch shoreline sought by Under Armour CEO Kevin Plank.

Plank’s Sagamore Development Co. has opened a high-tech display at the ICSC convention hall to drum up investor and leasor interest for the office, retail and apartment community whose groundbreaking, The Brew recently reported, has been delayed until sometime in 2018.

Sagamore is also one of the 150-plus sponsors of this year’s Maryland Party, whose “Great Gatsby” theme nicely encapsulates the person who invented the night of schmoozing, dealmaking and a little dancing amid the palm trees. 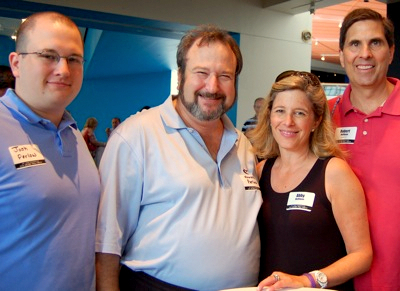 Howard Perlow (second from left) at the 2012 Grand Prix in Baltimore. (bisnow.com)

Howard L. Perlow started the Maryland Party in 1998 as a luncheon for members of the Baltimore real estate community attending the ICSC convention.

A lawyer who pleaded guilty to misappropriating $300,000 from his title company in 1990, Perlow had lost his law license and briefly served prison time.

But he soon rebounded. Sprung from prison, he started another company, Residential Title & Escrow, in Owings Mills and, in 2002, he was pardoned by then-Gov. Parris Glendening.

He became a major political donor as well as a philanthropist. In the last election cycle, for example, he and his company handed over $6,000 (the legal maximum) to Mayor Pugh, $2,500 to Gov. Hogan and $2,000 to Jack Young.

All the while, his annual luncheon in Vegas, retooled as an evening event, attracted more and more businessmen and, with them, politicians seeking development dollars for their constituents and themselves.