Kevin Plank seems dedicated to showing off his Baltimore bona-fides.

He is building replica crabbing boats to ferry tourists around the harbor. He’s restoring Maryland’s straight-rye whiskey tradition at his South Baltimore distillery. And he’s proposing a sprawling state-of-the-art community on the Patapsco River’s Middle Branch.

So it seems puzzling why the managers and employees at his new hotel in Fells Point are spreading misinformation about the history of the property. On the other hand, I’m reminded of an interview that Plank, founder and CEO of Under Armour, conducted a few years back with the Baltimore Business Journal:

“We tell stories for a living,” he said. “We tell great stories, and we build products to support those stories.”

Two years ago, when Kevin’s brother, Scott Plank, announced at a meeting of the Fells Point Main Street plans for a chic hotel inside the old Rec Center, I suggested that he include a historian who could teach its history to employees. Without a moment’s hesitation, he dismissed my idea.

Fast forward to February 2017, a month before the hotel’s opening, when I told Sagamore Pendry’s general manager of my fear that employees would tell tall tales about the building and its alleged origin as the processing station for immigrants coming to America. He referred me to the guest services manager who said he didn’t have time to speak to me for several months.

It was then that I realized that the letter I had written to Kevin Plank several weeks before had been in vain. Just as my advice to his brother had been brushed aside. So I hand-carried a second letter to Plank at Under Armour headquarters where I summarized these facts:

Baltimore City opened the Recreation Pier in 1914 so that citizens living at the foot of Broadway had someplace to go for fun. Their houses were tiny and families were large, with 8, 10 or more children.

The men’s jobs as stevedores and the women’s in canneries were brutal, 6 or 7 days a week. Aside from work and church, there was little to do.

The Rec Center had lots of room for parents to relax and kids to play games. And the city got income by renting out the surrounding dock for commercial purposes.

When March 2017 arrived and the Sagamore Pendry opened, I began asking its employees what they knew about the building. They were happy to tell me that the Rec Center was the first view of America by millions of immigrants coming from Europe.

Since the building contained a lovely ballroom, I could picture (from their eager descriptions) what the immigrants did when they arrived in America. They danced.

After their long passage across the ocean, one could imagine the unfurling of tuxedos and petticoats from the duffel bags and wicker baskets of the dispossessed, who then waltzed to the sounds of cannery whistles and ship horns. 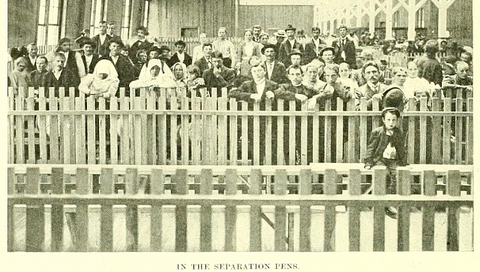 The place where immigrants did disembark from Europe between the 1860s and 1914 was the Locust Point piers owned by the Baltimore & Ohio Railroad.

“Because of its direct connections to Chicago and St. Louis and contracts with immigrant passenger lines such as the Norddeutscher Lloyd company, B&O Railroad Piers 8 and 9 at Locust Point in Baltimore played a significant role in receiving the millions of immigrants who came to America in the years following the Civil War. From state and federal records linked to family papers and family memories, the stories of those who came and stayed or who passed through can be told.”

Above is a photo of a little boy sitting alone amid the “segregation pens” at Pier 9 around 1904.

Below, Bromley’s 1906 Atlas shows the two immigrant piers in red. Note the absence of the Rec Pier across the harbor. It wouldn’t open until 1914. 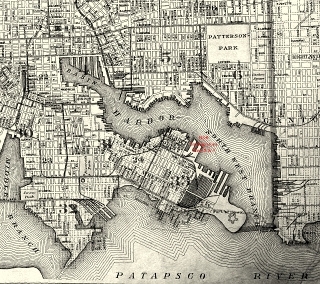 “Surpassed Only by Ellis Island. . .”

Fells Point is full of invented stories. They hide in between the old bricks, waiting to ambush some newcomer who knows nothing about the area.

The immigrant story was first enshrined in a news release issued by Sagamore Pendry in March that described the hotel as “once famous as an entry point for immigrants to the U.S.”

On the hotel’s website under “Neighborhood,” it was flatly stated, “After the War of 1812, Fell’s Point became the country’s second largest point of entry, surpassed only by New York’s Ellis Island.” (This faux fact was still on the website when this story was published.)

The story quickly took flight to California. In an article titled “Little-Known Details About the New Sagamore Pendry Hotel,” Michael Fuerstman, co-founder of the Pendry Hotel franchise outside of San Diego, enthused:

“The fact that this was an immigrant processing station is pretty incredible. We’re honored to know that this is where people became American citizens.” So proud, apparently, that the entrance wall of the hotel features the laser-cut lyrics to “The Star-Spangled Banner.”

Making the co-head of the Pendry brand look foolish and uninformed isn’t the best way to conduct business. No doubt that is why a hotel manager called me recently to complain that my letters and warnings have caused “a flurry of emails and chaos between managers and corporate.”

His call wasn’t made to correct the record, but to shame and silence this voice.

At least for now, the immigrant mythology continues to flourish. Last Friday, I struck up a conversation with two women who were getting into a car with Virginia tags.

They had come to Baltimore to stay at the Sagamore Pendry. The woman who identified herself as a schoolteacher told me what she had learned from the front-desk employees.

“We heard this is where immigrants came to America. The second highest number after New York came through this building.” 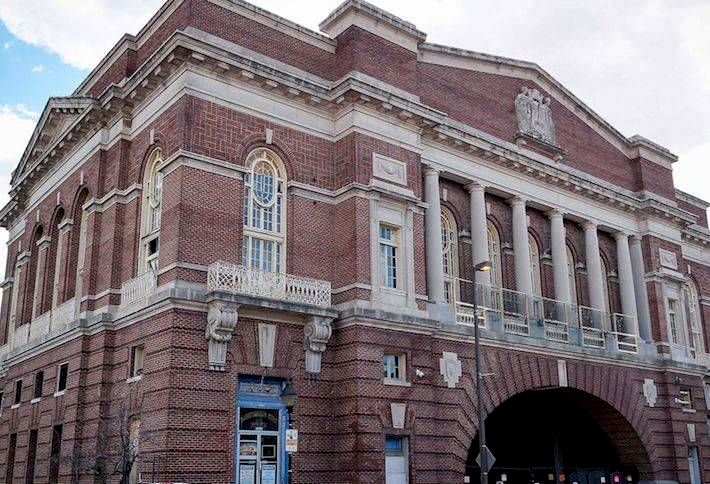 The Rec Pier was used to film the TV crime drama “Homicide.” It was otherwise vacant for years until the Plank group announced plans for a boutique hotel. (Brew file photo)