In a hearing room dominated by opponents – but after city agency heads uniformly gave it their blessing – a 148-unit apartment tower proposed in North Baltimore sailed to approval by a City Council committee yesterday.

During the voting session, Councilman Ryan Dorsey at first blasted the Overlook at Roland Park plan. Noting city documents saying that the building would have 297 parking spaces, he declared, “This amounts to a private developer encouraging and supporting car development.”

The 3rd District freshman went on to call the idea that the project would benefit the city “trickle-down economics” and “irresponsibly myopic.”

Pointing to projected rents of $2,000-$2,500 a month, Dorsey also criticized the project for being unaffordable for the average Baltimore resident and “structurally racist.”

He then changed course, noting that the city’s Law Office testified that the developer’s application for a Planned Unit Development (PUD) was submitted in time.

“I still believe and have faith in the agencies that testified here today that the PUD was entered with legal sufficiency,” Dorsey said.

Describing his options as “limited,” the councilman concluded: “I vote yes.”

“I thought we had a vote there for a minute,” muttered John C. Murphy, attorney for residents objecting to the project to be located behind the former Belvedere Towers, recently purchased by Jonathan Ehrenfeld and renamed “The Falls at Roland Park.”

By a vote of 6 “yes” and one abstention, the Land Use and Transportation Committee approved the PUD bill, introduced by another freshman, Councilman Isaac “Yitzy” Schleifer of the 5th District.

Councilwoman Mary Pat Clarke abstained, saying she has family in the Sabina-Mattfeldt neighborhood across Falls Road from the proposed project.

The bill is expected to move to the full Council for a vote next Monday.

While the majority of the capacity crowd in the Council chambers yesterday were opponents wearing white “Don’t Overlook Us” tee shirts, Ehrenfeld also mustered a group of supporters.

One of those wearing a blue “Vote YES to Overlook” shirt was Shelley Sehnert, president of the North Roland Park Association (NRPA) who sat with the developer. 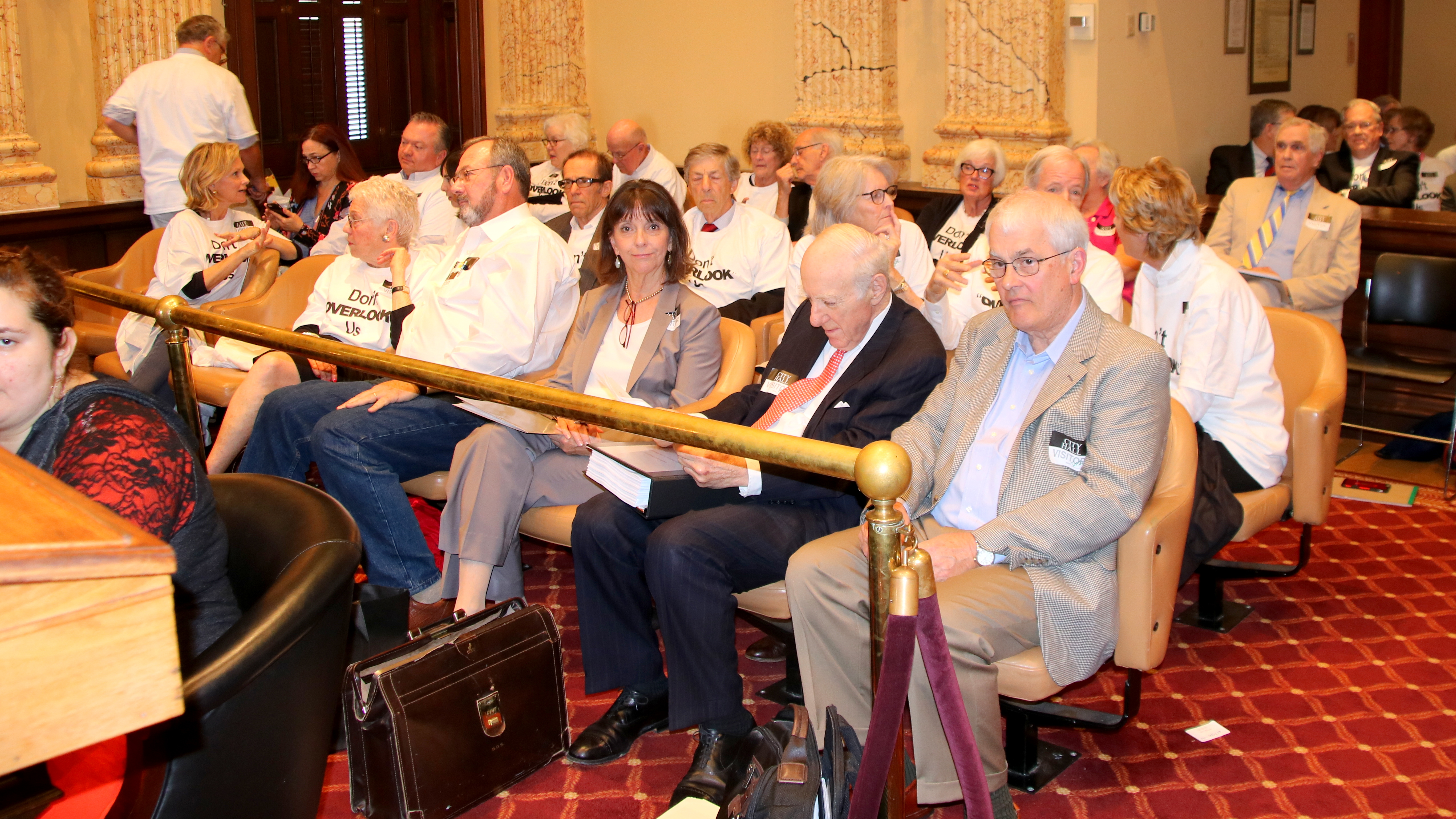 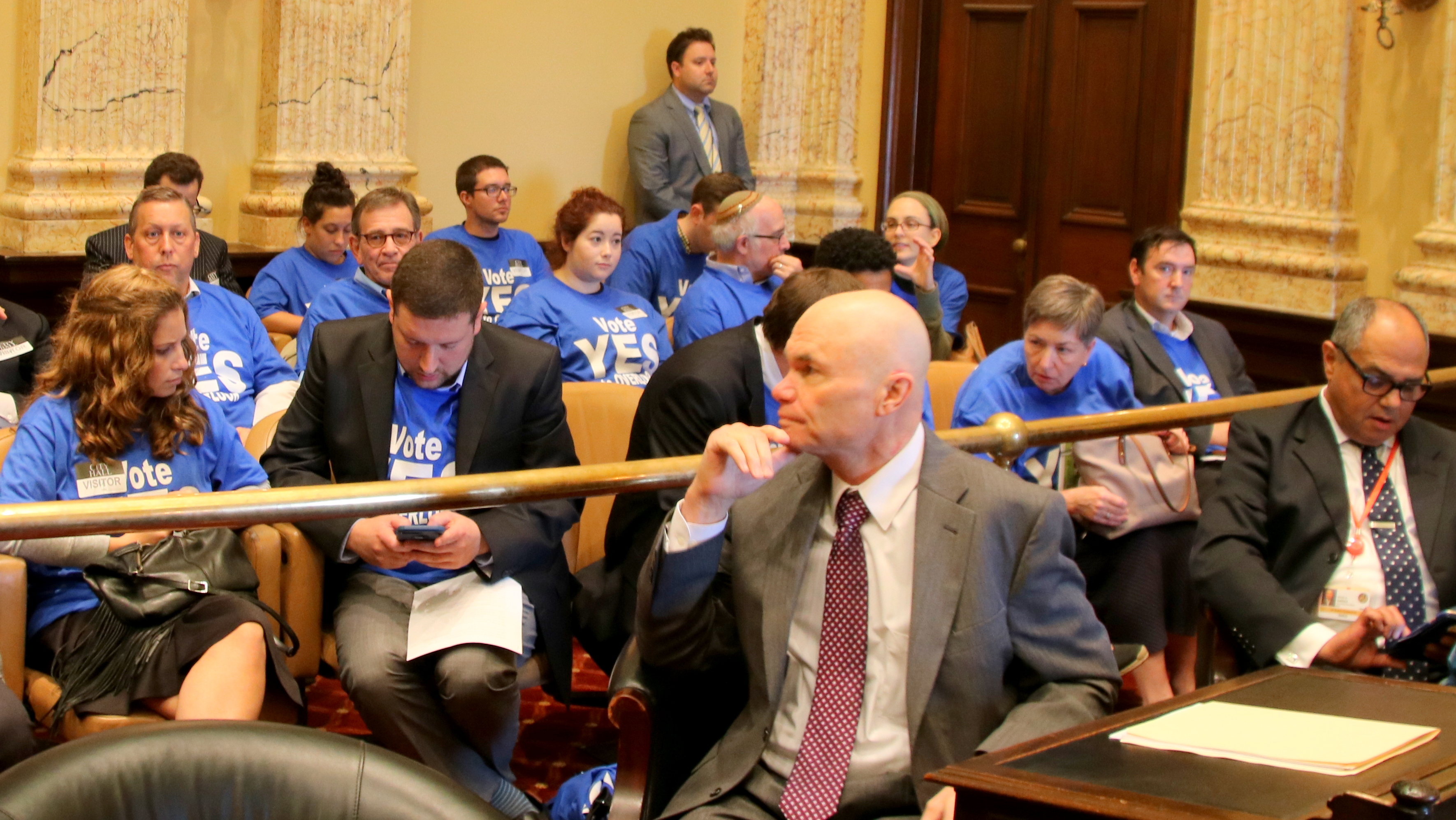 Among Sehnert’s points when she addressed the committee was that additional car traffic at the busy Falls Road and Northern Parkway intersection as a result of the project “would not be catastrophic” .

That same conclusion was the upshot of a traffic impact study presented by Valorie LaCour, chief of transportation planning for the city.

LaCour acknowledged that the study, undertaken by Columbia-based consultant Sabra, Wang & Associates, had not been finished when the Planning Commission approved the PUD bill last month. 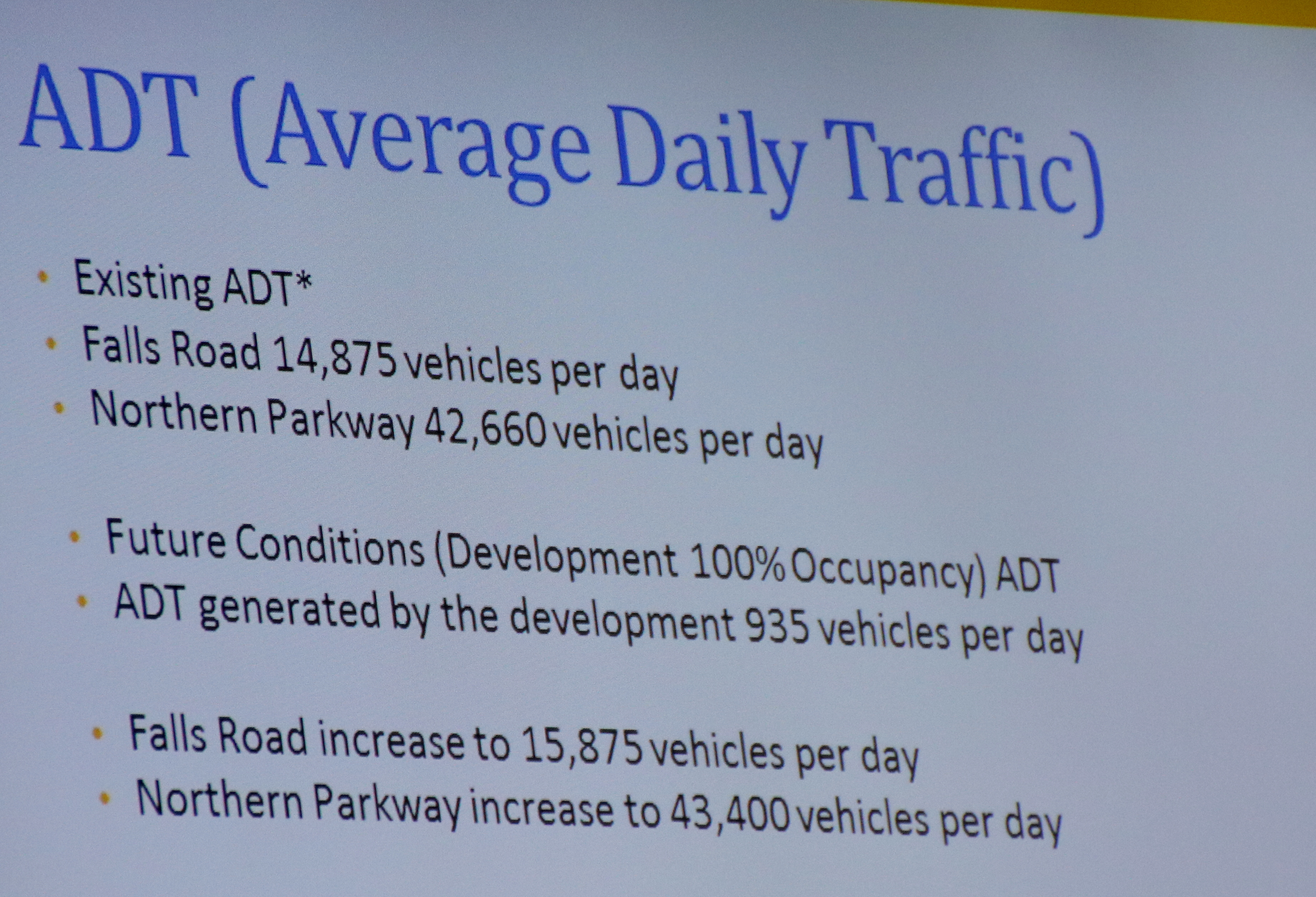 Background traffic is expected to worsen in the area by the time of the 2019 build-out, with at most a three-second increase in delay in the Level of Service (LOS) at the Falls Road/Smith Avenue intersection during the evening rush hour, turning the present “D” Level of Service to an “E” Level of Service, LaCour’s chart said.

A note at the bottom of one of the charts said: “The City’s acceptable standard is a ‘D’ or better.”

“New trips generated by the proposed development will not result in any degradation of LOS from background conditions,” LaCour said.

Ehrenfeld has agreed to pay the city $18,000 to improve the pedestrian and transit accessibility at the Falls Road-Northern Parkway intersection. (That agreement was approved by the committee in the form of an amendment to the bill.)

A witness for the residents, Poplar Hill resident Jamie Riordan, denounced the traffic study as “deficient and inadequate.”

Riordan based his comments on a review of the study by Chester “Rick” Chellman, a traffic engineer referred to the project’s opponents by the Urban Land Institute.

Riordan said the DOT study failed to consider five of 13 areas required by the city’s own standards, among them traffic signal timing optimization, intersection geometry and historic accident data.

He said the study also didn’t include additional traffic that would come from the expected expansion of the existing “The Falls at Roland Park” building from 238 units to 292 units. (Both apartment buildings would be using the same entrance and exit.)

“The city’s attitude seems to be, ‘It’s already a failed intersection and it will still be afterwards so who cares?’” Riordan said. 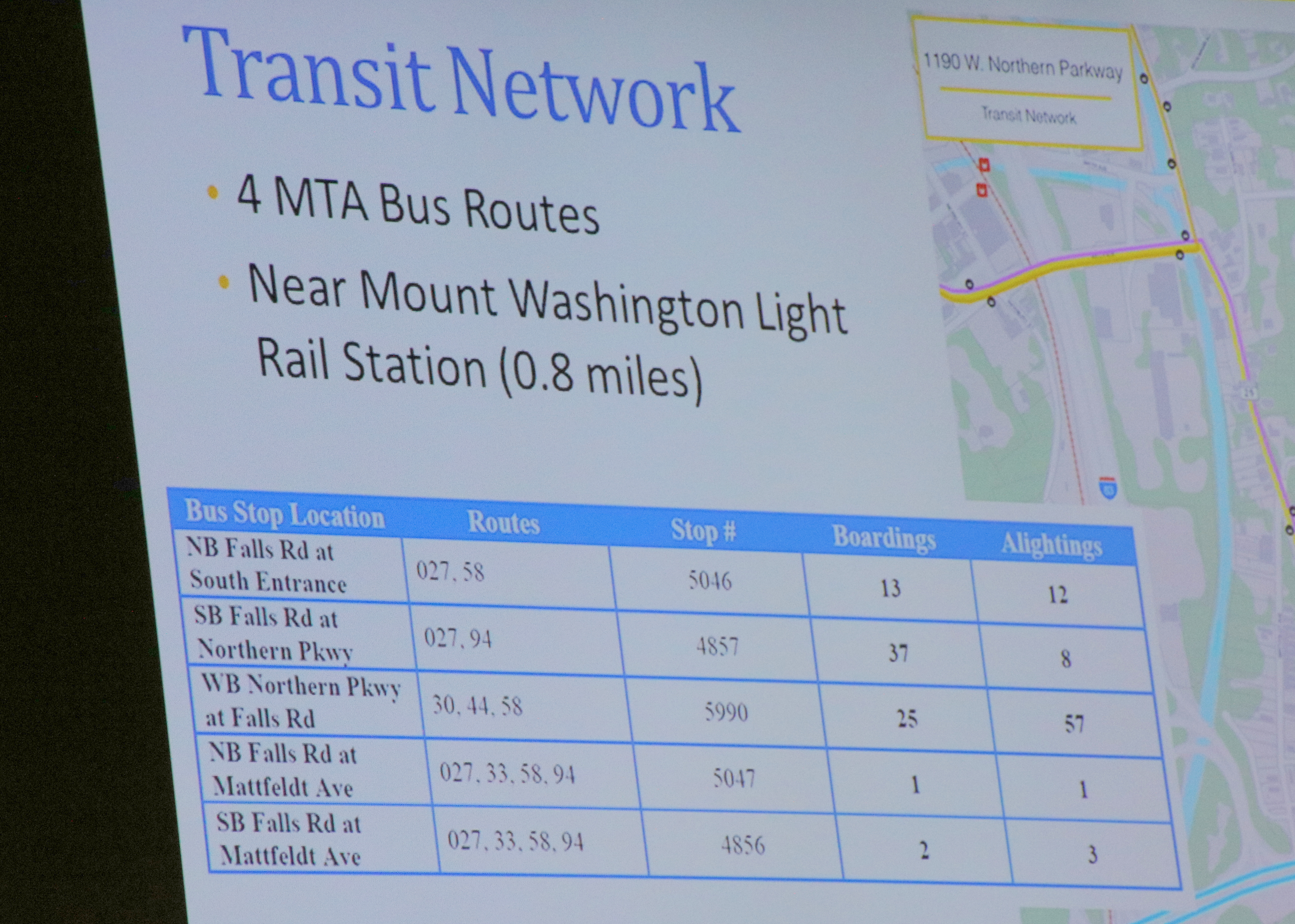 Sehnert described the Overlook project as an example of “smart growth” and a transit-oriented development, pointing to the presence of MTA bus lines and the proximity of the Mt. Washington Light Rail stop.

Opponents, noting that the developer has said he is courting an upscale clientele and bracing for tenants with two cars, said Overlook residents are not likely to use transit.

Others noted the difficulty of using MTA buses at the busy intersection or of getting past whizzing traffic on Falls Road to reach the Light Rail station .8 miles away.

Residents who testified at the end of the three and a half hour hearing had a starkly different view of the project from city officials and project supporters. Several spoke about the difficulty of crossing three lanes of traffic to turn left onto Falls Road after exiting the Jones Falls Expressway.

“The most pressing issue is the traffic: it is absolutely untenable,” said Carol Everson of Sabina-Mattfeldt, saying the additional traffic generated by the new development would diminish her neighborhood’s quality of life and cause fatalities.

Sheila Riggs, of Poplar Hill, said the community does not want another “gigantic building” like the half-century old Falls at Roland Park tower, which she likened to “Soviet-bloc” architecture. 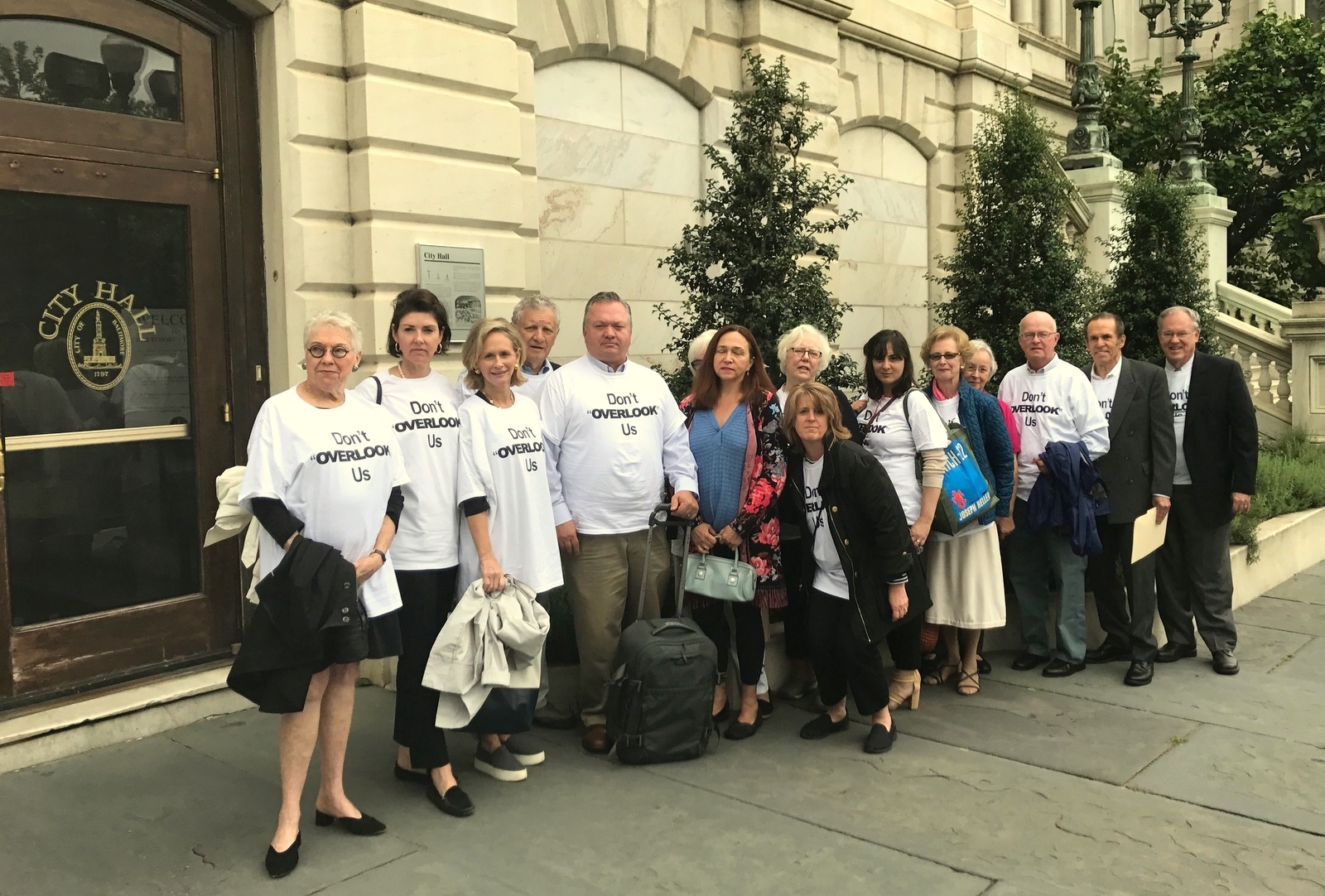 Some of opponents of the proposed development who came by bus to City Hall yesterday. (Mark Reutter)

Frances Turner, of St. George’s Road, complained about what she said was the poor representation by her community association.

She said that both NRPA and the Poplar Hill Association sent letters to the city supporting the project without holding meetings in the community.

“Why does a developer who does not live in our neighborhood have more say than I do?” Turner asked.