The rubble and construction trash dumped by a demolition contractor next to Henry Anderson’s house is gone.

Workers showed up and removed it on Monday, the day after Baltimore Brew published Anderson’s account of his fruitless attempts to get the city to clean up the mess.

The 74-year-old West Baltimore man had described how – after years of complaints about the ugly vacant beside his house – a wrecking crew had taken it down only to leave behind not just slabs of concrete but damage to his red brick rowhouse.

“I’m glad that we were able to address your request and demolish 1157 North Carrollton Avenue, but deeply sorry that the demolition was not completed as it should have been,” said Housing and Community Development’s Michael Braverman in a statement emailed to the Brew today by his communications director. 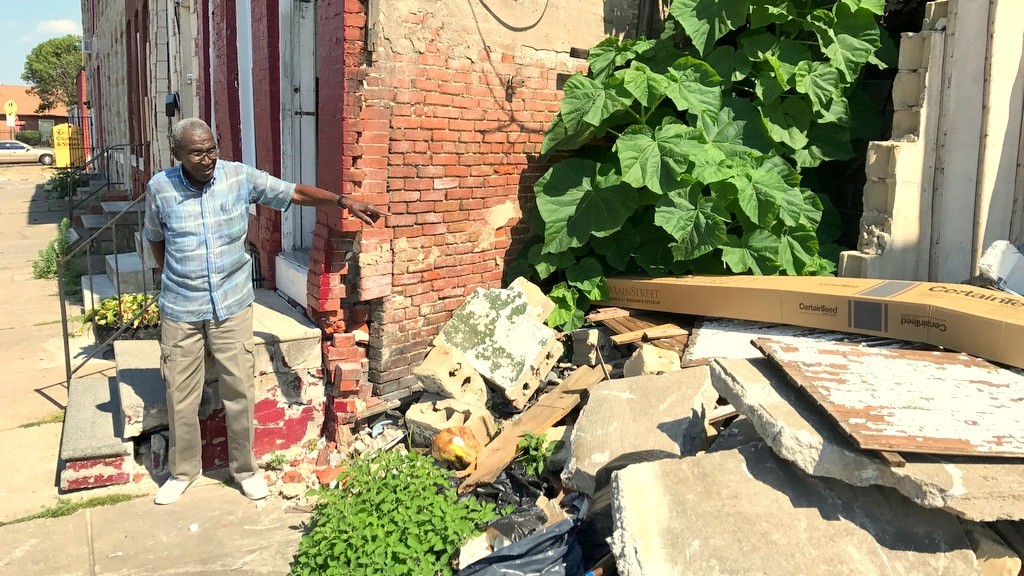 Henry Anderson pointing, last week, to the rubble and the damage to his property and steps from demolition done by P&J Contracting. (Mark Reutter)

Anderson may have gotten an apology out of the new housing chief, a longtime city housing official, but he’s not going to be satisfied until everything he says Pless Jones/P&J Contracting did wrong there six months ago is set right.

Today, the steps at Anderson’s home in the 1100 block of Winchester Street were still knocked apart. Portions of the sidewalk were still cracked and jagged. The damaged corner of Anderson’s house remained an unsightly jumble of dislodged bricks, now smeared with concrete patching.

“So when are they going to start fixing it?”Anderson said, speaking with the Brew by phone. “They probably just hit the wrong lever or something, but they made a mistake. They need to fix it.”

The biggest job yet to be done is the party wall of the house next door.

Today it was just as workers left it months ago – two rows of cinder blocks had been laid down to prop it up.

In today’s email, Braverman said his staff “reached out to the contractor so that appropriate action could be taken” and got the debris removed Monday morning.

The rest of the work is still to be completed.

In his email, Braverman told Anderson that the contractor was “back at your location this morning to begin repairs to your stairs and to the sidewalk and to build the party wall at 1155 N. Carrollton.”

How the party wall of 1155 North Carrollton Avenue looked this morning – pretty much as it has for six months. (Louis Krauss)

“Please know that we are working with the Bureau of Purchases to ensure that City demolition contractors perform according to the terms of their contract and that demolition is completed following established City protocols.”

To Anderson, that answer means one thing: delay he fears will drag on for months.

“It shouldn’t take that long,” said the former forklift driver for Shepherd Electric Supply. “Everything’s hard when you don’t want to do it.”

After living with the busted steps and broken wall for half a year, he’s fed up.

“I’m a patient man but this is dangerous and it just makes my house look really bad,” he said. “I have cousins coming from Virginia this summer to stay with me – I’d hate for it to look like this.”

Anderson told the Brew he and his late wife had had been complaining about the dilapidated structure beside their home for 25 years before it was demolished.

Braverman was asked, but did not address, why the agency had been unresponsive for so long.