Mayor Catherine Pugh disclosed today that the city has agreed to pay $600,000 to settle its share of a lawsuit stemming from the 2013 death of Tyrone West.

The 44-year-old’s fatal collapse, following a struggle with eight Baltimore police officers and a Morgan State University officer, became a poster child of alleged police brutality in the black community two years before the police-in-custody death of Freddie Gray sparked a day of rioting.

Pugh made the disclosure following today’s $400,000 payment by the Maryland Board of Public Works to the family of Tyrone West, which resolved the state’s portion of the federal lawsuit involving the Morgan State officer. Morgan State is a state-run university.

Thus, the total settlement (from the city and state) will be $1 million in return for the family dropping their lawsuit, which was scheduled to go to trial this fall.  The family is represented by A. Dwight Pettit.

The city’s share represents the biggest cash outlay since the $6.4 million settlement with the Gray family – and is double the $300,000 paid in February to the family of Anthony Anderson to settle another high-profile excessive force case.

West died on July 18, 2013 after police pulled over his vehicle in Northeast Baltimore for a routine traffic stop.

Police said West refused to let two patrol officers search the vehicle for suspected drugs and began to struggle and try to escape.

Reinforcements were called in. An extended fight broke out, with officers repeatedly striking West with batons in order to restrain him, police said, until he went into “medical distress.”

Officers attempted to revive him on the scene. He was later taken to a hospital where he died.

The case had enormous repercussions in the black community. It spurred the current state’s attorney, Marilyn J. Mosby, to run against incumbent Gregg L. Bernstein, who had ruled that the officers had used “reasonable force” and would not be charged.

Mosby criticized Bernstein during the election campaign, but declined to reopen the case after she became state’s attorney in 2015. 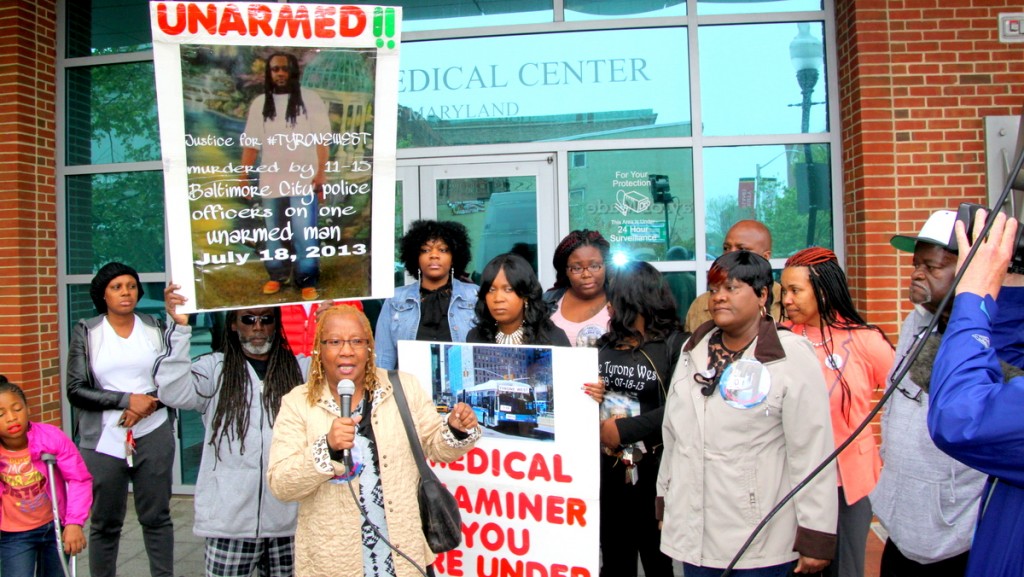 The family of Tyrone West demonstrates in front of the state medical examiner’s office in May 2016, calling on State’s Attorney Marilyn Mosby to reopen the case. (Louie Krauss)

Over the last four years, the West family has conducted weekly vigils in West’s memory to awaken interest in the issue of police brutality.

Dissatisfied with the state medical examiner’s conclusion that the 44-year-old died from a preexisting heart condition, the family hired a forensic pathologist from New Jersey.

The pathologist, Dr. William Manion, said that West’s preexisting heart condition was not sufficient to explain his death.

Instead, his review of the medical evidence indicated that West died from “positional asphyxia,” or suffocation due to the position in which he was restrained by the officers.