At an apartment building that has loomed over the intersection of Northern Parkway and Falls Road for half a century, workers are now attaching a 78-foot-tall metal structure on the south-facing wall.

The aluminum framework will support a neon sign spelling out the words “The Falls,” referring to the building’s new name.

It will also support a series of metallic “fins” that would “each have a wave structure all undulating differently” to evoke the nearby Jones Falls, as a developer’s representative put it at a recent Zoning Board hearing.

LED lights on the display will “create the look of moonlight catching ripples of streamwater” at night, he said, describing a facade that would tower above a gas station and the Sabina-Mattfeldt neighborhood across Falls Road.

The Planning Department initially balked at the sheer size of this sign (and another one of equal dimensions proposed for the north-facing wall).

The department recommended against approval of the zoning variance that Blue Ocean Realty and its hard-charging president, Jonathan Ehrenfeld, sought for the signage.

The staff noted that the display would be nearly five times the permitted size for “an internally illuminated sign on a residential structure.” (The full rectangle, stretching from the top of the nine-story building to the bottom, they said, clocked in at 345 square feet.)

But at a hearing last week, the Planning Department withdrew its objections, and the zoning board unanimously approved the new signage for The Falls at Roland Park, formerly known as Belvedere Towers. 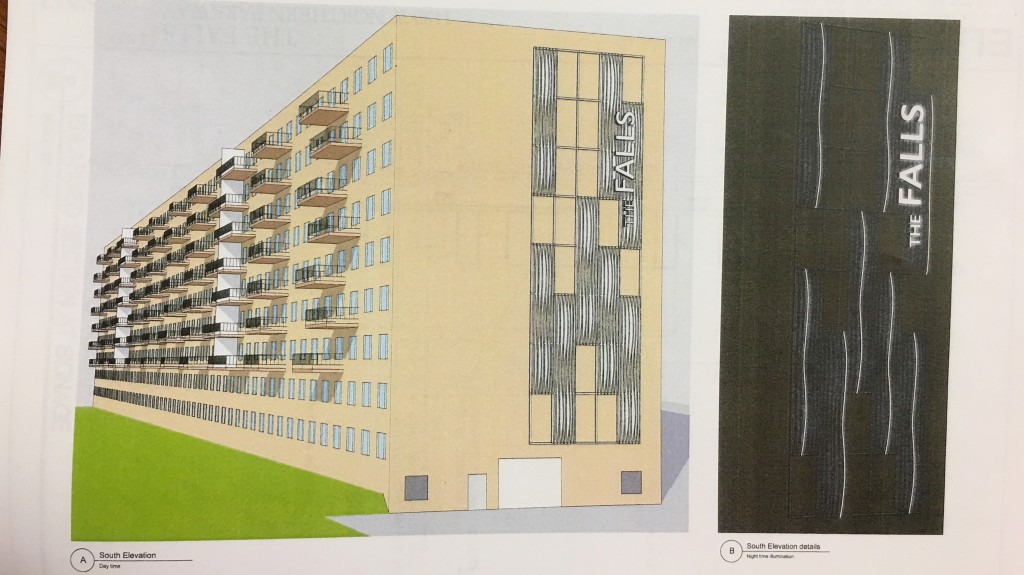 The illuminated day-and-night signage approved by the Zoning Board for the former Belvedere Tower. The left illustration shows how the signage will look by day, and (at right) how it will glow with undulating “waves” at night. (Board of Municipal and Zoning Appeals)

How did Blue Ocean do it?

Longtime development consultant Al Barry made it happen for the owner by agreeing to withdraw the proposed north-facing sign and by literally reframing the issue:

The big rectangle structure was not the sign, but instead was “art” and “a design element” that had already been granted a permit. Only the letters inside the rectangle should constitute the sign, Barry argued.

The consultant also asserted that the Planning Department had erred in its description of the lettering portion of the sign’s square footage.

The reduced measurement still exceeded the legal limit, but that was enough for the zoning commissioners. “The requested sign is proportional to the unusually large size of the existing building,” they ruled.

Standing 87 feet above grade, the sign also exceeded height limits, but the board essentially waived that problem as well, writing that “a strict application of the Zoning Code would result in unnecessary hardship.”

Their approval was for only the lettering portion of the request, with Barry promising to return to the commissioners with a lighting plan after discussing it with the North Roland Park Association (NRPA), which, he noted, “we have a good relationship with.”

Blue Ocean’s success with signage comes in the wake of other victories for the Northwest Baltimore-based Blue Ocean and its politically-plugged-in president Jonathan Ehrenfeld.

In June, the City Council granted approval for “The Overlook at Roland Park,” the company’s proposed 148-unit apartment building planned on the hilltop ridge above the former Belvedere Towers. As expected, Mayor Catherine Pugh signed the bill this week.

In May, Ehrenfeld received city approval for another plan – to move Blue Ocean’s Reisterstown Road headquarters to an 89-year-old church in the center of Mount Washington Village.

Under the design plans approved by the Commission for Historical and Architectural Preservation (CHAP), the former St. John’s Mount Washington Episcopal Church at 1700 South Road would have its stained glass windows replaced with clear windows. 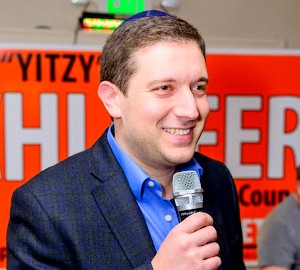 The plaintiffs include three community associations: the Lehr Stream Neighborhood Association, Roland Park Civic League and Sabina-Mattfeldt Community Improvement Association. In addition, seven individuals signed onto the suit, part of a group of 50 property-owners who agreed to be named plaintiffs.

Hunter Cochrane, who owns property adjacent to the proposed apartment complex, also has filed a lawsuit seeking review of the PUD approval.

Makeover for an “Ugly” Building

The new sign for the Falls at Roland Park building is part of what Barry said is a $6 million renovation being undertaken by Blue Ocean, which purchased the structure a year ago.

“The building was very worn down,” said Blue Ocean’s Nathan Fry at the August 1 zoning hearing.

He said the $300,000-$400,000 sign and other facade work are meant “to complete the transformation of that ugly building that’s been there forever into something that’s fresh and different.” 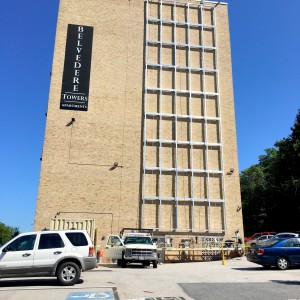 How will the Lighting Look?

That question appears to be up to the North Roland Park Association, which Barry said opposed the sign not because of its size but because of the way it was to be lit.

“There will be either no lighting or lighting of a lumens that they find acceptable or some other kind of lighting,” Barry told the zoning board.

In an email to the city, NRPA president Shelley Sehnert said the group has already made up its mind.

“It is the Association’s preference for the option that outlines the individual letters of the sign with small LED lights, thereby reducing the illumination of the originally internally illuminated letters,” she wrote. “It is a more aesthetic approach.”