Davon Fair’s mother and grandmother still choke up when they talk about the 24-year-old who was shot and killed on his way home during what Baltimore police say was probably a robbery last March.

But mingled with their tears are expressions of frustration over the fact that – five months after Fair was killed – police have made no arrest in the case.

“No, it won’t bring Davon back, but it will let him rest and let us rest as well,” said 62-year-old Bethea, speaking at the vigil while neighbors cooked and classic hip-hop tunes played in the background.

As Baltimore averages a murder a day in a record-setting year for homicides, Bethea said she and other victims’ family-members are beginning to doubt whether the police will ever identify their loved ones’ killers.

“It’s sad not just for us, but for all the families suffering from senseless violence,” she said, garnering nods from friends, some of whom have direct experience with violent deaths in their families. 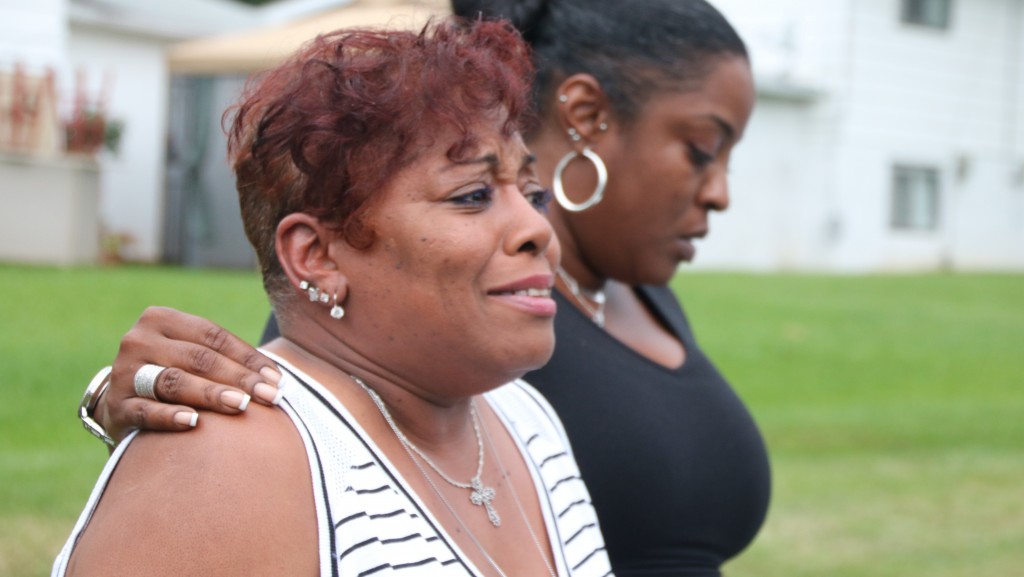 Her daughter, Krenne Simmons, Davon’s mother, stood with her, weeping as well.

“It’s sad that he can’t be in this world because you’re supposed to do what you need to do and do right, and then people take from you out of jealousy and stupidity,” Bethea said, pushing through her tears.

“This is going on not just with our family but with families everywhere. At some point this needs to stop,” she said.

“Everybody is killing each other for stupid, unnecessary reasons. This world is turning into a battlefield. You’re supposed to help each other out, not kill someone because they’ve got five cents more than you.”

Candles and a Reward Offer

Davon’s father, Davon Fair Sr., stood next to a large portrait of his son during the vigil wearing a T-shirt that had  a photo of his son on it.

Sarah Daniels, a teacher who worked with Simmons and knew Davon, said it was sad to see a good person who had his mother’s best traits leave too soon.

“There’s an expression that fruit doesn’t fall far from the tree, and he definitely didn’t,” Daniels said. 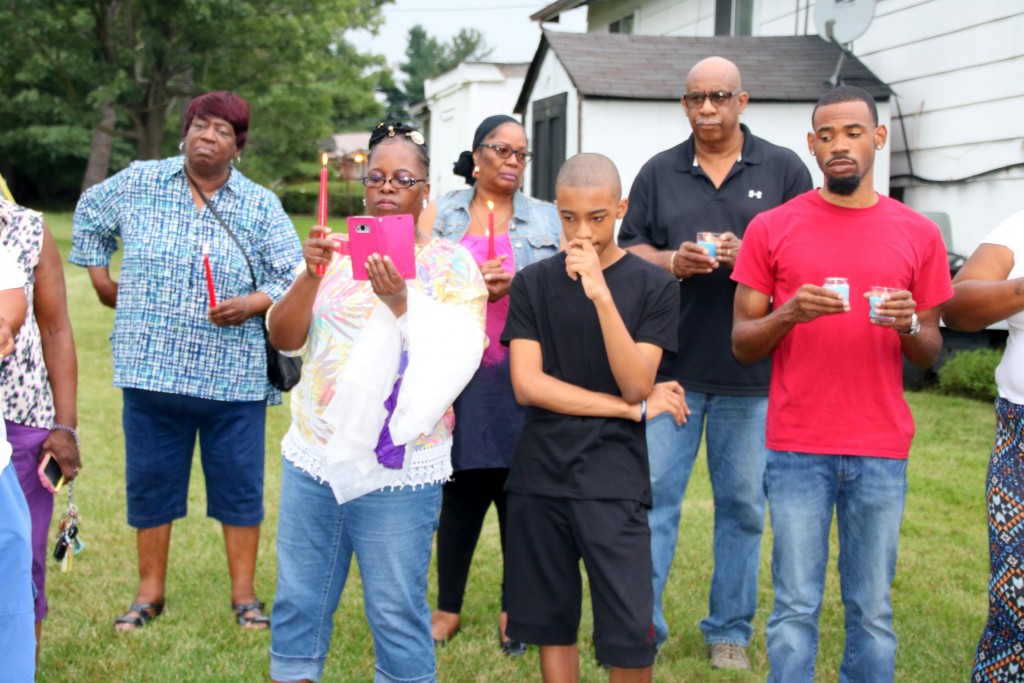 Beyond serving as a chance to come together and remember a young man attendees recalled as quiet and kind, the vigil was also an opportunity to call attention to his case.

Speakers live-streaming the vigil on Facebook asked people to give police any information that might help them apprehend the killer.

Family members donated $13,000 to be added to the original $2,000 reward for anyone with information leading to an arrest.

Stacks of Metro Crime Stoppers flyers detailing the $15,000 reward were arrayed on an improvised shrine made from a dining room chair and a piece of white plastic spread on the grass.

In front of a photo of Davon in his Chicago Bulls cap, the family placed blue votive candles. Friends and family made brief remarks or just offered a quick word of encouragement.

“I hope you do find the person who did this to Davon,” one of them said simply.

Gunned Down Close to Home

Family members say they first heard what happened from a friend who was speaking by phone with Fair that night, March 14, and heard the attack as it was happening.

Fair had been at a friend’s house and was on his way home to his apartment in the 4000 block of White Avenue when he was confronted by an assailant at about 11 p.m., family members said.

He was taken to Johns Hopkins Bayview and died three days later.

According to his mother, Davon had a laid-back personality and was pretty private, making them confident the killer was a close acquaintance of his or that someone set him up to be robbed and shot.

Simmons said her son was diligent, working at Popeye’s to earn extra money while attending college. He went to Delaware State University first, then came back to Baltimore and went to Morgan State, where he earned a degree in Business Management in 2016.

She said he spent the past year working at the Amazon warehouse stocking customer orders and was planning to go back for his Masters in the fall.

“He was laid back, quiet,” Simmons said. “He always wanted to play for the Ravens and played football in college.”

Fear of Being Forgotten

Unsolved killings in the city have persisted amid the surging levels of crime and violence plaguing Baltimore.

In recent years, less than half of Baltimore’s homicides have resulted in arrests.

Officials said earlier this year that less than 49% of homicides so far in 2017 were cleared, a number that includes cases from previous years and cases that were closed administratively without an arrest being made. 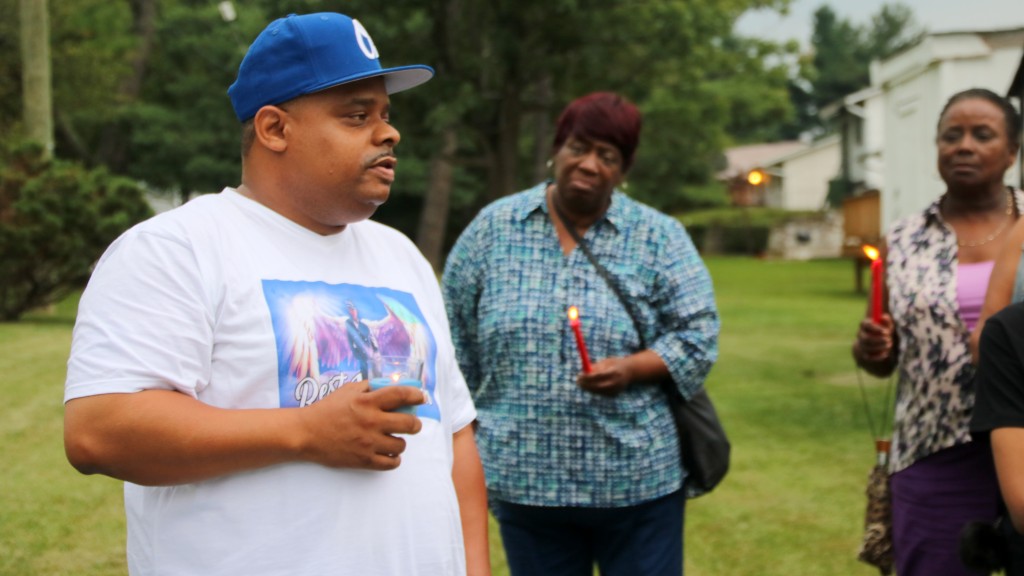 Simmons fears her son’s slaying will be forgotten and become “a cold case.” She cited arrests made earlier this year in connection with the killing of the brother of Baltimore police spokesman T.J. Smith and the killing of the stepson of prominent local attorney Warren Brown.

“Those cases were figured out right away,” she said. “It’s like they used the old man’s power and resources to find them. But they’re not using resources to find out what’s going on with everyone’s loved ones, who are just as important.”

A spokesman said the police department works diligently on all homicides and that the Davon Fair case remains open and active.

“Detectives are still looking for new leads that will help identify a suspect or suspects,” Det. Donny Moses said. “Thus far nothing substantial has panned out.”

“Pertaining to a motive, detectives still believe this was a robbery gone bad,” Moses said. “However, detectives will admit that until they can find a credible witness or a suspect to validate that idea, they are not fully committed to robbery being the only possible motive.”

“We’re over 200 murders already, with not enough detectives,” she said. “So as soon as they have a chance to get a lead on one case, it’s on to the next one.”