Baltimore’s 225-year-old monument to Christopher Columbus, said to be the oldest in the country and the world dedicated to the explorer that is still standing, has been severely vandalized.

A video posted today shows someone smashing the inscription at the base of the 44-foot-tall obelisk located at the intersection of Harford Road and Walther Avenue, across from Herring Run Park.

This morning the words on the statue – Sacred to the Memory of Chris. Columbus Oct. XII MDCC VIIIC – were unreadable, a hole smashed in the stone.

“Racism: Tear it down,” one sign leaning on the monument base says.

“The future is racial and economic justice,” said another sign that was lying in the grass.

The vandalism comes in the wake of intense controversy, across the country and in Baltimore, over monuments to the Confederacy and the city-ordered removal of four Confederate-related monuments last week. 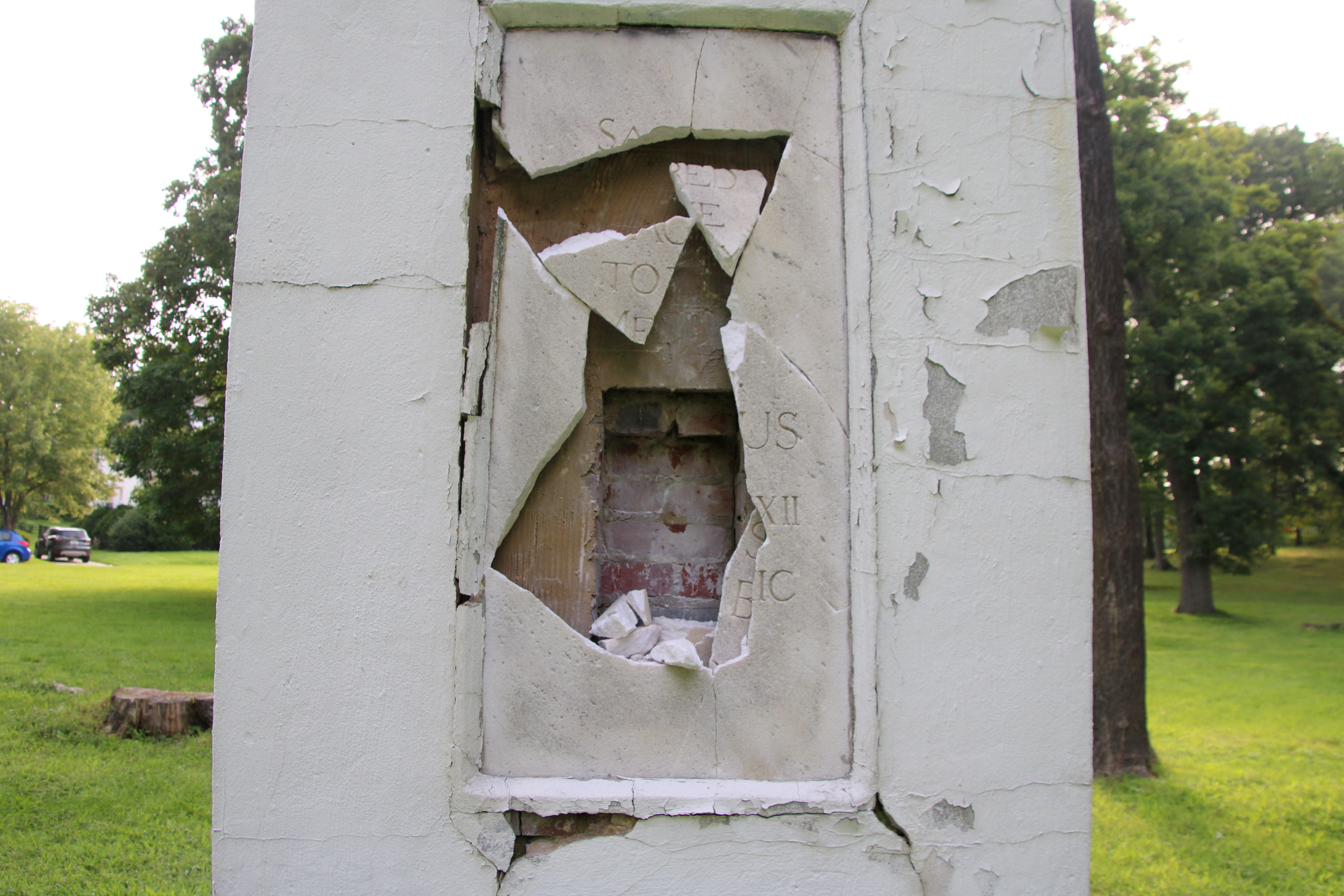 In the video, one person smashes the monument with a sledge hammer as another holds a sign. An unidentified narrator explains why the action was being taken:

“Christopher Columbus symbolizes the initial invasion of European capitalism into the Western Hemisphere. Columbus initiated a centuries-old wave of terrorism, murder, genocide, rape, slavery, ecological degradation and capitalist exploitation of labor in the Americas. That Columbian wave of destruction continues on the backs of Indigenous, African-American and brown people.

“Racist monuments to slave owners and murderers have always bothered me. Baltimore’s poverty is concentrated in African-American households, and these statues are just an extra slap in the face. They were built in the 20th century in response to a movement for African Americans’ human dignity. What kind of a culture goes to such lengths to build such hate-filled monuments? What kind of a culture clings to those monuments in 2017?”

Just under two minutes, the video was posted on the YouTube channel, Popular Resistance. It appears to have been filmed early this morning.

There are two other monuments to Columbus in Baltimore, one located at Druid Hill Park, the other at the edge of Little Italy.

It was unclear this morning if they had been vandalized as well.

Baltimore Police this morning said they were checking out the reported vandalism and warned that the perpetrators will be prosecuted.

“It’s dangerous and it’s also unnecessary,” spokesman T.J. Smith said at a media briefing, noting Tuesday night’s city-ordered removal of the Confederate monuments. “It’s something that has a process and the process was seen last week.”

Meanwhile reaction was swift in a city that has been abuzz with the issue of offensive monuments since the recent white nationalist rally in Charlottesville, Va. to protest the removal of a Confederate monument there.

“I’m hoping it’s just a random act and hopefully not part of some bigger idea,” said Joe DiPasquale, president of the city’s Italian American Civic  Club. “We’re going to be talking to the police about protection for all the statues in the city.”

“It’s going to be a hot one,” DiPasquale predicted.

Online commenters were less restrained. “These crazy kooks will be exhuming our ancestors’ remains next,” one man wrote on Facebook.

“A slippery slope,” one warned. “Stop! Live and Let Live!” another agreed.

“We wouldn’t be having this issue if this had been Columbus’ point of view,” another shot back.

“Destruction is inappropriate? Did anyone bother to tell Columbus that?” longtime activist and blogger James MacArthur wrote, adding the hashtags #BaltimoreUprising, #PartII and #TakeThat.

A man who answered the phone at the Little Italy Lodge 2286 in the 900 block of Pratt Street called the idea that Columbus should not be honored “ridiculous.”

“You cannot believe the things that are said about him, he did not do those things,” the man said.

Pushing his son in a stroller near the bashed-in monument this morning, Dan Meyers said he was “of two minds about it.”

“Columbus did bring together Europe and America. That was a major accomplishment,” said Meyers, who lives in the Arcadia neighborhood. “But he did some horrible things to Native Americans.”

Scott: Not the Way to do it

Because of the national debate over whether the Italian explorer who landed on American shores is worthy of veneration, several cities have changed the name of the Columbus Day holiday, a national holiday since 1934.

Seattle, Minneapolis and Berkeley, Calif., for example, have already changed the name of the second Monday in October from Columbus Day to Indigenous Peoples Day.
Baltimore would have made that change as well, under legislation proposed last year by 2nd District City Councilman Brandon M. Scott.

Scott said today said he still thinks Baltimore should not honor the circumnavigator but disapproves of the destruction of the monument to him.

“As you know, I don’t think we should be celebrating Columbus in any fashion, but vandalism is not the way to go about it,” Scott said.

Scott said he was not ready to offer an opinion on what should happen to the city’s three Columbus monuments because he was not sure if they are all on public property.

“But I think people need to know what those statues to him mean to Native American people and African-American people,” he said. “He represents the dawning of slavery and exploitation in this country.”

Once Stood in a Parking Lot

Even before the latest controversy, the Columbus monument has had a somewhat tortured history.

According to Baltimore Sun coverage from the 1990s, it was erected in 1792 by a Frenchman, the Chevalier d’Anemours (or d’Anmour), at Belmont, his estate near Harford Road and North Avenue.

“In 1887, Belmont became the Samuel B. Ready School,” wrote reporter Robert A. Erlandson. “It moved to West Baltimore in 1938 to make way for Sears Roebuck’s huge store, which is now the Eastside District Court.” 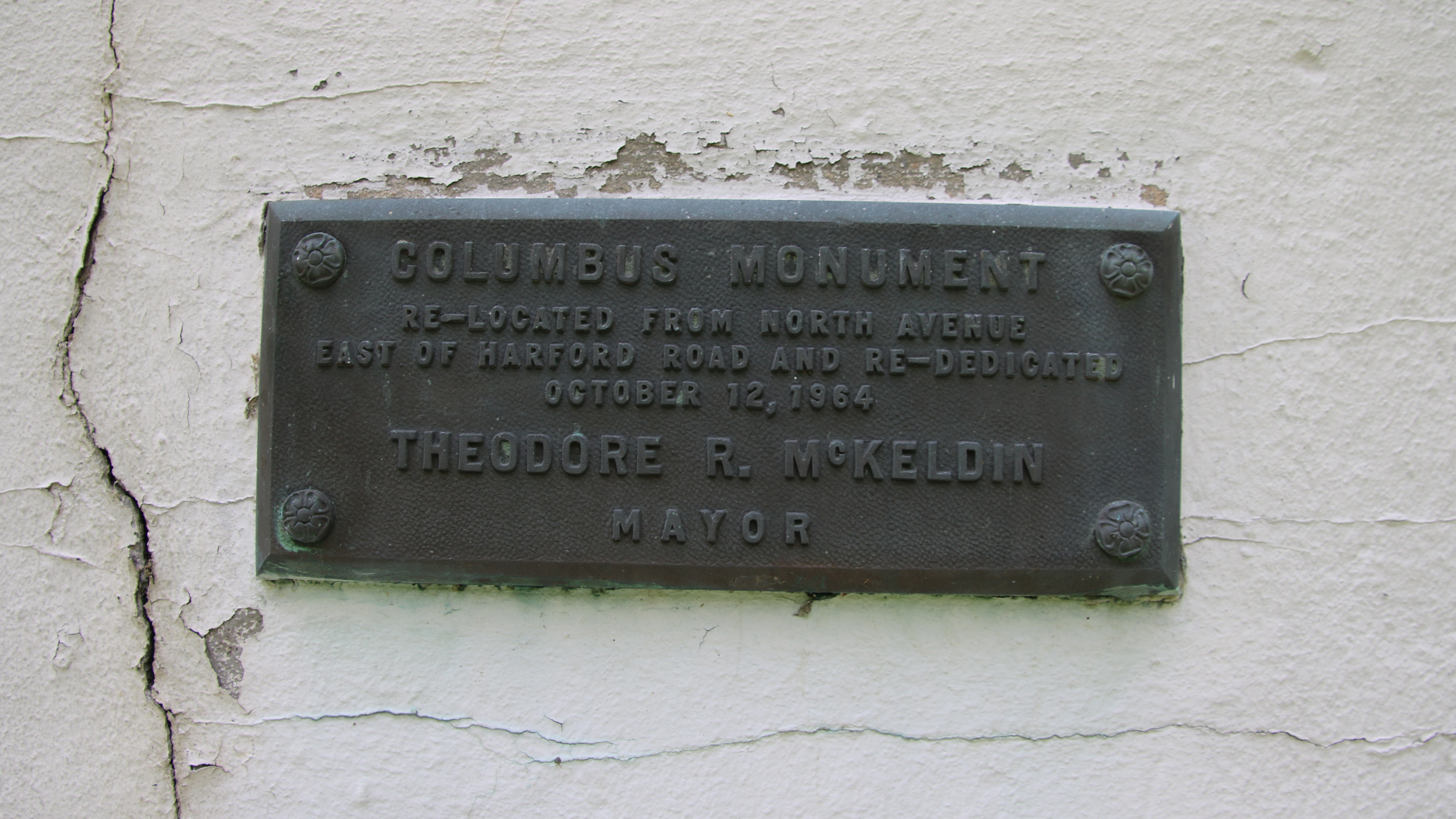 Originally erected in 1792, the Columbus obelisk was moved to its present location in northeast Baltimore near Herring Run Park in the 1960s. (Fern Shen)

“The obelisk, considered too fragile to be moved, was left behind on what became a Sears parking lot,” Erlandson noted.

But that obscurity didn’t last.

Under Mayor Theodore R. McKeldin, the monument was moved its present leafy green setting in Northeast Baltimore. A bronze plaque notes that it was re-dedicated on October 12, 1964.