Considering they lead a city awash in burglaries, assaults, carjackings and a second year of record-setting killings, the top government officials assembled for a South Baltimore meeting about crime got some strangely soft-ball questions.

How is the director of the Department of Juvenile Services selected? Shouldn’t we pay police officers more?

“What is the Mayor’s Office of Criminal Justice and what does it do?” said Councilman Eric T. Costello, the emcee of the evening, reading the questions received on note cards and via email.

“My former dog was murdered by an off-leash dog in 2016,” Costello said, reading from another.

In the days leading up to Monday night’s forum, Costello was online defending the format of his event, “The South Baltimore Peninsula Public Safety Forum,” from charges that challenging  questions would be screened out or edited.

Addressing the mute crowd was, in any case, a piece of cake for the panel, particularly Commissioner Kevin Davis, Mayor Catherine Pugh and City Council President Bernard C. “Jack” Young.

Speaking before about 300 people at the Federation of the Blind headquarters on Wells Street, the three opined about root causes and immediate concerns, offered anecdotes and data points and referenced plans, programs and possible programs.

“We are focusing on bringing Amazon here . . . There’s been an under-investment in our police department . . . Before the end of the year, we’ll have 250 houses for the homeless. WBAL is going to have a 24-hour-thon to raise money for the homeless,” Pugh said in her opening remarks.

Davis shifted smoothly from reassurances about the BPD’s focus on violent repeat offenders and the need for a BPD helicopter unit (“We couldn’t be a big city police department without one”) to humorous plugs for the department’s new crime-reporting app (“I see you looking down at your laps, you must be downloading it!”).

“The city has too many liquor stores,” Young said, responding to a question that cited a connection between liquor establishments and crime. The council, he explained, “limited the number of liquor stores in the city” through its citywide “Transform” re-zoning.

(No one mentioned that the zoning re-write has had little effect on liquor establishments so far and is haphazardly enforced.)

The only one breaking a sweat seemed to be State’s Attorney Marilyn Mosby.

“We prosecute 50,000 cases a year, in Baltimore. . . . we have a 93% felony conviction rate,” she said, beginning her remarks with a run-down of stats on her office’s performance. 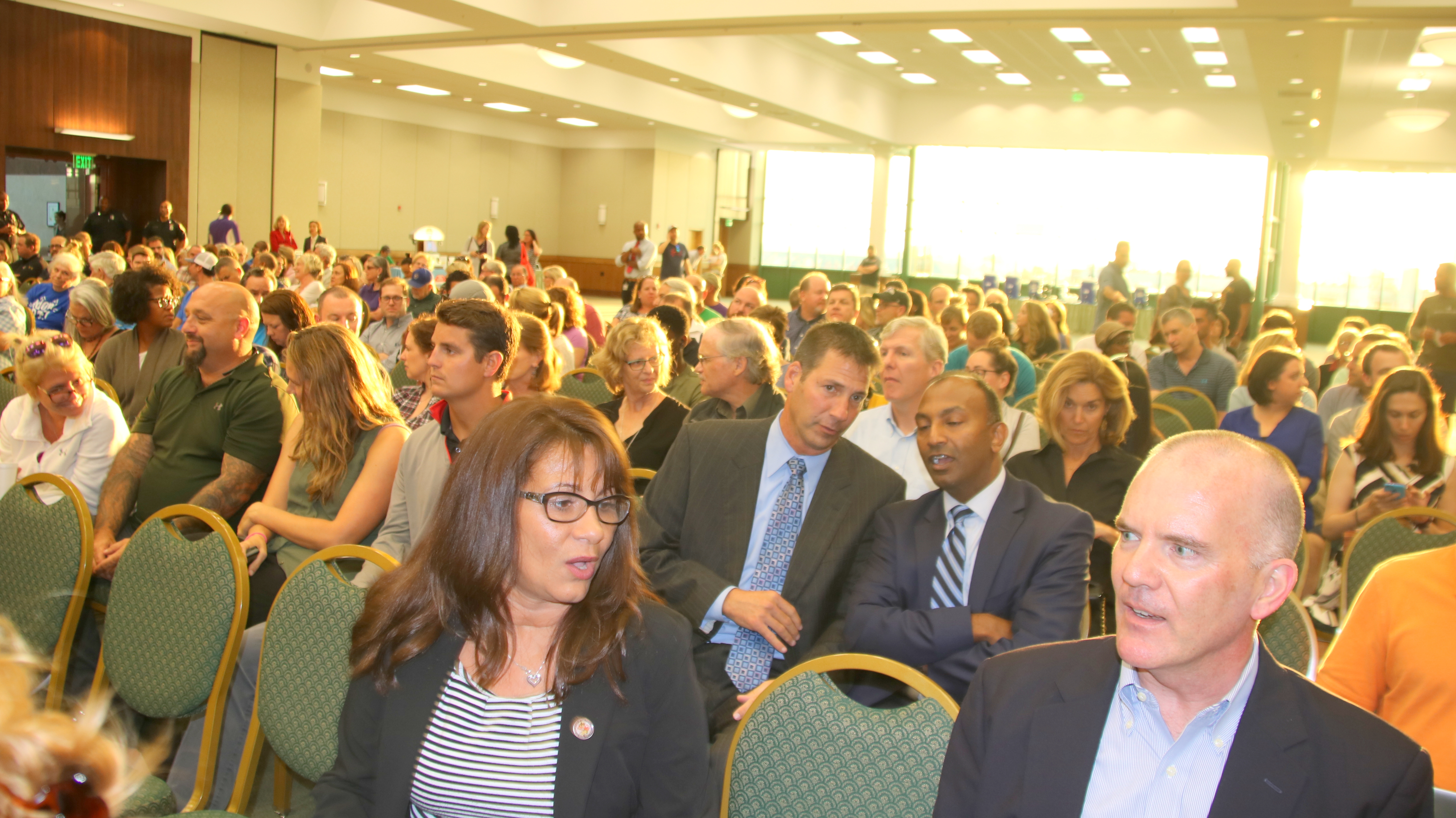 Among those listening in the audience were two attorneys, Ivan J. Bates and Thiru Vignarajah, who have announced plans to run for state’s attorney in next year’s election.

Mosby has not said whether she is running for re-election, but she has been fundraising.

“Hmm, seems like every candidate for state’s attorney is here,” Pugh observed, as she headed for the elevator at the end of the evening.

(It wasn’t clear if the other announced candidate, lawyer Chad Curlett, was there as well.)

Dealing with Students and Bar Patrons

Davis responded with heat to some questions, including a query about “the pros and cons of body cameras.”

“There really are no cons,” Davis began, saying most of the 7.5 million minutes of footage so far shows “police officers doing really good work.”

As he has before, Davis dismissed the body-worn camera footage released this year which showed, among other things, an officer “discovering” a soup can full of drugs that he had placed in a trash-filled lot moments before.

“It’s given the local and national media somehow the impression that officers were planting evidence when they just didn’t have their camera on,” Davis said.

Some of the more specific questions were answered by the Southern District’s commander, Maj. Steven Ward. Asked, for example, about crime related to Digital Harbor High School students, Ward said the principal and staff are being “proactive.”

“They went out to the businesses and asked them to not serve their children during the daytime which is 7 a.m. to 3 p.m.,” Ward said. “We’re deploying there Monday through Friday – one sergeant and two officers between 2:30 and 3:45.”

He said there are two units in Latrobe Park for every football game.

Asked about unruly bar patrons, Ward said the district has “formed a relationship with the Federal Hill Hospitality Association” and that three officers, at city expense, typically go to the area from 11:30 to 2 a.m. on weekend nights. More officers are dispatched if needed.

“They were known to each other” in both cases, Ward said, declining to comment further.

The only raw moment at the two-hour event came when a man, ignoring the format, stood up and began speaking.

“Not one word has been said about poverty,” he said. “That’s the cause of crime. Why can’t I bring that up?”

He went on to confront the panel about the city’s failure to pass a $15-an-hour minimum wage law for Baltimore.

“You voted against it, the mayor voted against it,” the man said, addressing Costello, who was trying to continue on with a question about Pier Six Pavilion concerts generating “bad language, vulgarity and loud noise.”

“Shame on you,” the man said before exiting the room.

Pugh mentioned poverty in her closing remarks, going on to cite her mobile jobs unit, a “jobs program with Under Armour,” job fairs, the new free tuition at Baltimore City Community College, police hiring initiatives, “street lighting to make people safe,” the fact that Baltimore is “a Bloomberg City,” and other programs.

“We will bring the change people need to see,” she concluded. “It won’t happen overnight, but I can guarantee you that it will happen.”