Untreated wastewater is flowing into the Jones Falls from a private sewer line whose illegal placement inside a city storm drain has gone undetected for years, if not decades.

The Department of Public Works disclosed the sewage leak yesterday, but did not reveal the address of the leak or the fact that it will continue for some time.

DPW told The Brew the sewage is coming from the ex-Hooperwood Cotton Mills, a four-acre site in Woodberry whose 100-year-old buildings have been converted into warehouse space, light industry and a CrossFit club.

The site, located at the upper end of Clipper Park Road, is owned by Parkdale Enterprises, a property management company formed by Kenneth E. Mumaw, according to state assessment records. The property has been in the hands of the Mumaw family since 1988.

Today the phone numbers for Parkdale Enterprises and the Mumaw plumbing company were reported out of service. The rental office was closed yesterday when The Brew visited the property at 3500 Parkdale Avenue. 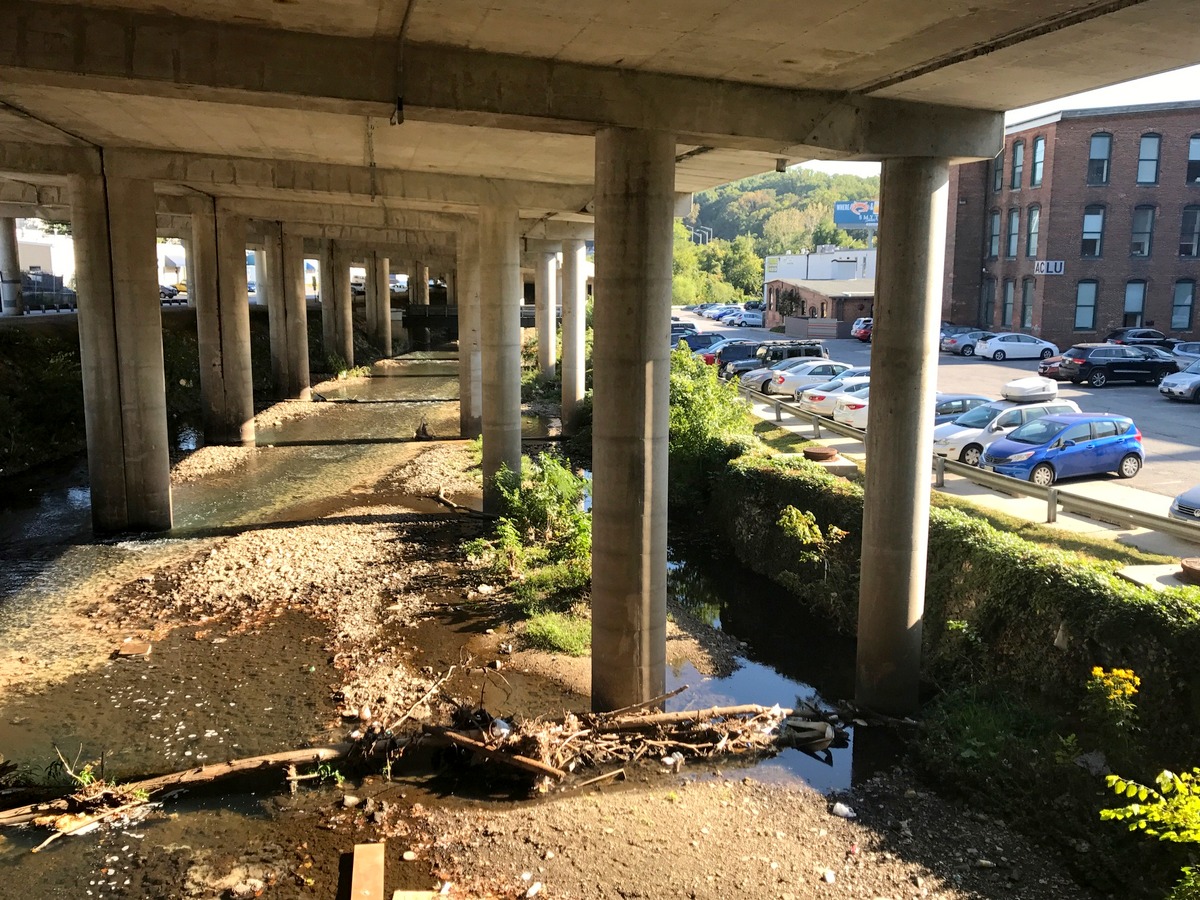 The Jones Falls had just a trickle of water yesterday at the Union Avenue bridge in Woodberry where sewage was traced to a sanitary storm drain, at right, that serves the Clipper Mill area. (Mark Reutter)

Discovered last Thursday, the secret sewer line lets out an estimated five gallons of sewage a minute, or 7,200 gallons a day, according to a Maryland Department of the Environment (MDE) spokesman.

City officials said they were unaware of the pipe’s existence. Baltimore is under a consent decree to find and close illegal sewer lines.

“The existence of this main was not known to DPW staff beforehand,” Jeffrey Raymond, spokesman for the Department of Public Works, told The Brew. “We are conducting further research to find when this pipeline may have been built and who built it.”

Discovered last Thursday, the illegal pipe is a separate problem from the city’s struggle to reduce sewage going into the Jones Falls through “structured release” overflow pipes.

The city maintains these pipes to release wastewater and stormwater into the Jones Falls during heavy rains to avoid sewage backups in private homes and on city streets.

The city has promised to eliminate the overflow pipes by July 1, 2022. This summer alone, the pipes have discharged over 8 million gallons of untreated sewage water into the Jones Falls (here and here).

Raymond said the agency has received 311 calls in the past about “discoloration of the water” as the Jones Falls passes under the Union Avenue bridge.

By the time the agency tested the water, any traces of sewage “had dissipated or been diluted,” he said.

Last week, however, elevated levels of ammonia, a marker of sewage, were detected during routine pollution testing of the Jones Falls next to the bridge.

DPW inspectors traced the sewage to a five-foot-diameter storm drain next to Union Avenue that runs under the Light Rail line and up the hillside.

The storm drain passes the Clipper Mill development and upscale townhouses before ending at Parkdale Avenue across the former cotton mill. “We’ve still got pollution control analysts trudging around streams working to track down stuff like this,” Raymond pointed out.

Inside the storm drain, the inspectors uncovered a sewer pipe cut so that whatever wastewater flowed through it was destined for the Jones Falls. Inspectors also found other disconnections and leaks in the pipe as well as debris cluttering the storm drain.

“This is a unique, difficult case. A complete solution is likely to take some time.”  – DPW official

“We believe this pipe to be an aberration” because Baltimore’s sewer and storm drain lines were designed be built as separate systems, Raymond said.

While not conclusive, the evidence points to a private sewer line that served the needs of the Hooperwood Mill and, perhaps, the Poole & Hunt Foundry – factories that existed long before Baltimore built its public sewers. 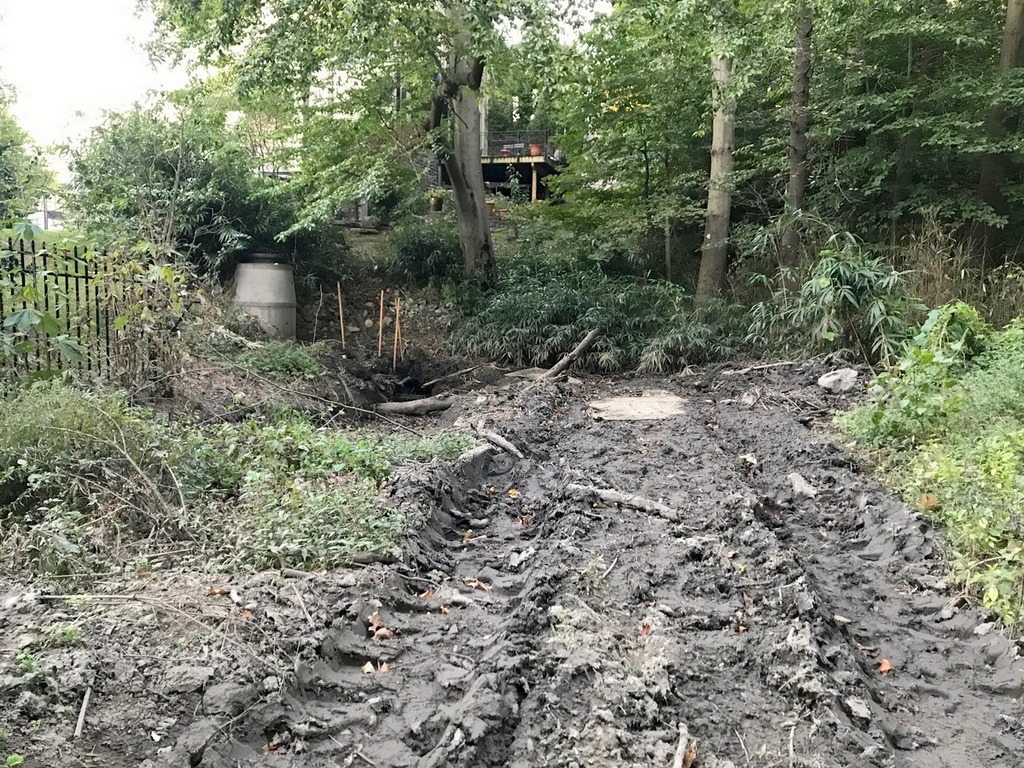 At Parkdale Avenue, heavy equipment has been working near the concrete storm drain, seen at left amid the foliage. A DPW spokesman said he did not know what took place there. (Mark Reutter)

The 2002 consent decree that Baltimore entered with the MDE and Environmental Protection Agency calls on the city to remove illegal sewage connections.

The decree, recently modified and extended, says that “Baltimore shall continue to identify and eliminate each illegal stormwater or sewage connection to the Collection System. . . approved under the 2002 Consent Decree.”

The city is required to take prompt enforcement action to remove any illegal connection and identify the person or entity responsible for the connection.

Raymond said DPW has not been able to stop the flow of sewage.

In the words of Carlos Espinosa, chief of the agency’s Office of Asset Management, “This is a unique, difficult case. A complete solution is likely to take some time.”

Removal of the sewer pipe from the sanitary drain is the long-term aim. The city also plans to work with the property owner to repair portions of the private sewer system.

Tom Pelton, a member of the Environmental Integrity Project, said the illegal hookup underscores “how much more work the city needs to do to halt its chronic and ongoing sewage leak problems.”

“The fact that the Department of Public Works is only now discovering this broken sewage pipe built inside a storm drain tunnel – after all these years of study under the federal sewage consent decree – suggests that more scrutiny is needed and that more surprises could be ahead.”

MDE spokesman Jay Apperson said the city reported the leak to the state at 4 p.m. on Friday.

He said MDE’s compliance office will look at the circumstances of the leak and the city’s response to evaluate whether it is in compliance with the terms of the consent decree.

The Hooperwood Mill was the subject of an earlier MDE compliance action when chemicals used to waterproof canvas products, such as tents and sails, were found leaking in underground storage tanks near Druid Hill Park.

Also discovered abandoned and leaching into the soil was oil used for making lubricating cloth for railroad freight car bearings, another mainstay of the factory, which once employed 2,000 workers but could not compete with Southern textile mills and closed in 1962.