After a workgroup’s two months of study on Baltimore’s homelessness problem and following Mayor Catherine Pugh’s three months of deliberation on their report, her administration released its strategy:

Ask the private sector for help.

“I want to reach out on the cost and take it to the business community, the philanthropic community,” Pugh said yesterday, as members of the work group stood by her side at City Hall.

Another observation by the mayor, speaking at her weekly press availability, was that there is a need to be clear about how pricey the problem will be to solve.

“It really is about creating homes for the homeless,” she said “But what people have not done up to this point is talk about what does that cost.”

To cost out how to house the estimated 3,000 people experiencing homelessness in Baltimore, Pugh did not turn to her workgroup, a panel of seasoned advocates, providers and government officials whose 27-page report was also released without discussion yesterday.

Instead, she appears to have extrapolated a number based on a project she has been touting lately by a Christian-oriented group, the Helping Up Mission.

“We are working with Helping Up Mission, which is building up capacity for 300 people to be able to live in housing and to be provided services,” she said, noting that the group’s proposed $35 million project would house roughly 10% of Baltimore’s homeless.

“So you ask me what’s the cost of ending homelessness in Baltimore? That’s $350 million,” she said.

Asked whether the city is providing any funding for Helping Up’s project, Pugh said it is not.

The mayor’s remarks were a letdown to anyone looking for new initiatives, a specific dollar commitment to affordable housing or clarification on how the city intends to handle the homeless encampments proliferating across the city.

“This is the best they could come up with?” said homeless advocate Christina Flowers, who listened to the mayor’s remarks.

“The mayor gathered all these people here for basically an update of what they’re already doing? Some $350 million they might get someday down the road?”

“Where is the sense of urgency?” Flowers asked, before heading off to talk to people living in the cluster of tents along Guilford Avenue north of City Hall. 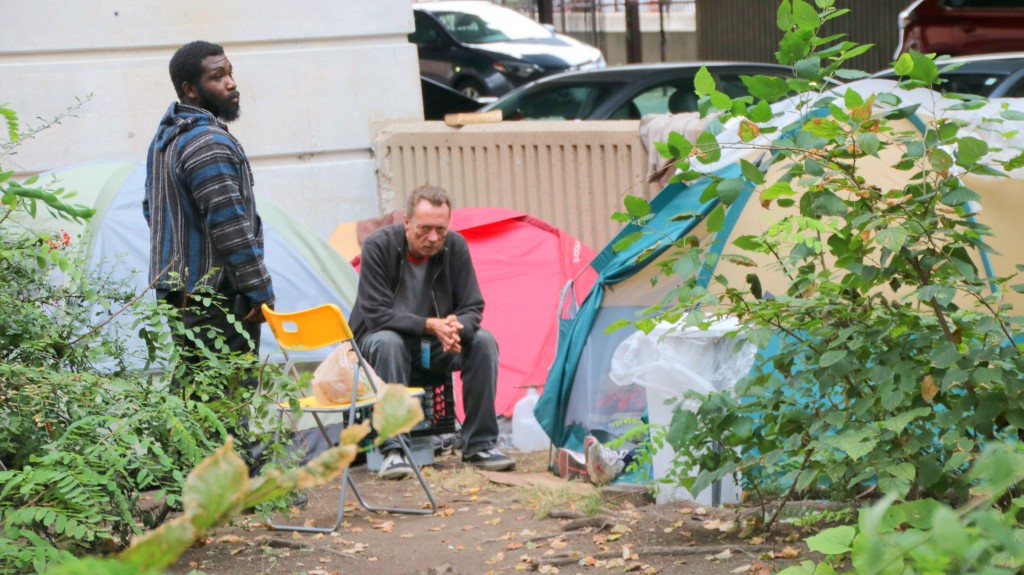 At the encampment on Guilford Avenue, Carl Banks visits with another resident. (Fern Shen)

Several of the initiatives Pugh described to reporters yesterday sounded new, but weren’t.

When Pugh said “one of the things we are going to do is hire a director for just homelessness in our city who will work with us on our goals and objectives so we’re currently recruiting for that position,” some reporters in the room concluded she was talking about a new position.

City officials confirmed she was referring to an already existing position that has been vacant for months – Director of Homeless Services.

Even the reference to turning to the private sector was not particularly new.

The Journey Home, Baltimore’s 10-year plan to end homelessness established in 2008, raises revenue from private individuals and businesses as well as through federal grants and star-studded fundraisers.

The event will be held on October 21 at the Modell Performing Arts Center at the Lyric, featuring Boyz II Men. Tickets range from $50 to $225.

In turning to the private sector, Pugh said she was responding to one of the findings of her workgroup – that the city is overly dependent on funding from the U.S. Department of Housing and Urban Development. 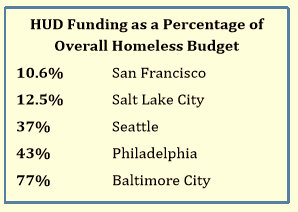 From the 2017 Mayoral Workgroup on Homelessness report issued yesterday.

Data in the report shows that while HUD funds 10% of San Fransisco’s overall homeless services budget, Baltimore depends on Washington for 77% of its allocations.

Terry Hickey, director of the Mayor’s Office of Human Services, said the FY18 budget for homeless services is comprised of $24 million HUD funding (71%) and $10 million of city General Fund money (29%).

The group’s conclusion: “Ending homelessness requires the realignment of existing resources and substantial increases of public and private investment.”

Asked whether it was realistic to expect private individuals, foundations and corporations to shoulder the burden, Pugh suggested the city can’t afford to do it.

“There has to be local investment and it has to be private dollars,” the mayor said.

Among the other findings of the workgroup:

• There must be recognition by city leaders that “permanent housing is the key solution.”

• Improving access to permanent housing is “more economical and will have a greater impact on ending homelessness than increasing the size of the [current] system by creating more emergency shelter and transitional housing.”

Pugh said that creating homes for the homeless is her focus, and pointed to the $35 million Helping Up project as an example.

Hickey had few details to offer about the project (“The city has not seen any program plans yet,” he said), but a Helping Up staffer who answered the phone yesterday was happy to describe it.

It does not appear to be permanent housing.

Alt said he wasn’t sure where exactly the new building will be located.

“It’s under construction. The initial part is to tear down an older building,” he said. “It’s two to three years away.”

Asked if the mission is a religious group, Alt answered this way: “We have Bible classes, we have regular chapel. It’s a Christ-based program.”

Aside from  privately funded Helping Up project, Pugh’s announcement included no new city spending except for a plan to double resources for “rapid re-housing.”

This would allow the city to provide short-to-medium-term rental assistance and support services to an additional 170 people.

Hickey said he didn’t know how much the expanded program would cost. His other talking points focused on future plans and areas of study:

“We have to increase our supply of permanent supportive housing. To that end, we’re going to work with the Continuum of Care’s housing committee to get a firm number on exactly how much housing do we need in Baltimore city to move forward, what does it cost and, under the mayor’s leadership, bringing public and private partnerships together for a very specific plan on how to bring that housing online,” Hickey said. 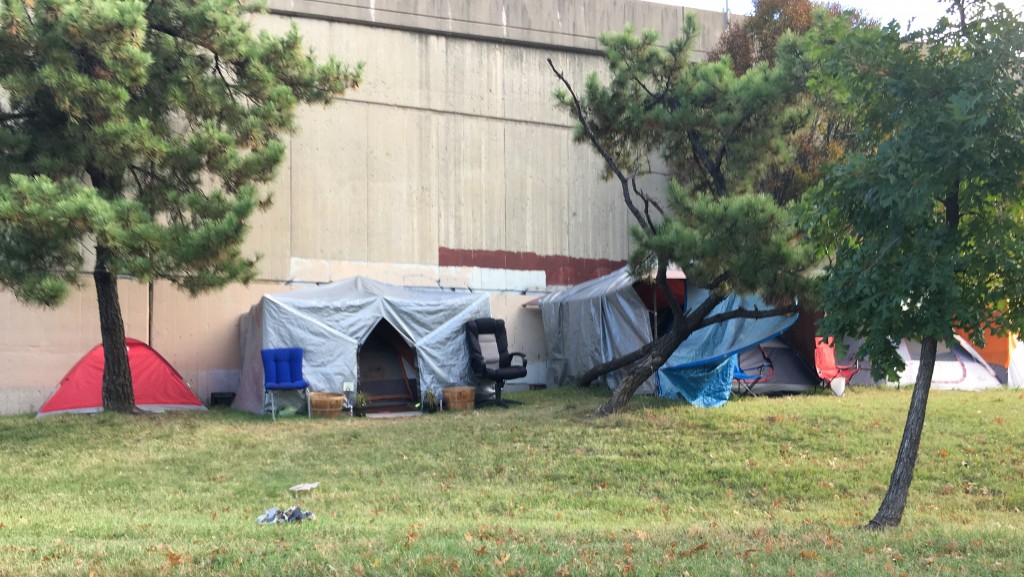 People living in tents along an on-ramp to Russell Street near the Ravens stadium. (Fern Shen)

He also said the city is “going to be taking a closer look at our emergency shelter system. . . how we can make shelters better, how can get people moving through shelters more quickly and how we can make it about customer service the minute they come through the door.”

He promised more specifics “in the next couple of weeks.”

Details were likewise minimal about the fate of the Tent City participants, who have resided on cots since August in the gym of a former school in West Baltimore following their 10-day protest in front of City Hall.

The surplus school building is a “Code Blue facility,” Pugh said, indicating that it has been designated as an emergency shelter space during cold weather.

Will the Tent City group remain in the gym?

“We have a plan to move those people to rapid-rehousing,” Pugh answered. 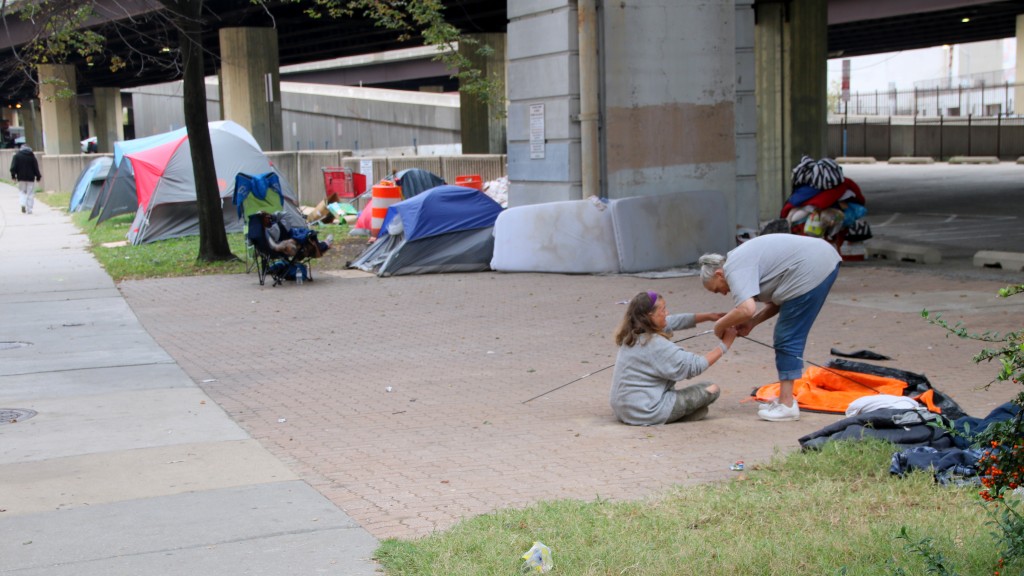