A series of public officials offered conflicting accounts this morning about who exactly was giving the gift to whom. But the mayor’s office and others don’t dispute what took place at the November 11 event at  the Shomrei Emunah Banquet Hall.

Photos accompanying the Baltimore Jewish Life article show Pugh gripping a large ceremonial key emblazoned with the city seal, facing what is described as a group of more than 500 people, including State’s Attorney Marilyn Mosby, her husband, state Delegate Nick Mosby, and a who’s who of top brass from the Baltimore Police Department.

“The highlight of the evening came at the conclusion of the banquet. Baltimore City Mayor Catherine Pugh addressed the attendees and then called Councilman Isaac ‘Yitzy’ Schleifer to the podium,” said the article, recapping the 13th anniversary meeting of the Baltimore Shomrim Safety Patrol (BSSP).

“Together they presented BSSP President Michael Diamond with a ceremonial key to a new 2017 Chevy Tahoe Command Patrol Vehicle,” the article said. “This vehicle will assist the organization in many of its community safety initiatives. ”

A now-dead link to an article in Baltimore Jewish Life about the mayor’s presentation of a Chevy vehicle to the patrol group Shomrim. (Facebook)

Asked about the gift of the vehicle, Pugh spokesman Anthony McCarthy texted The Brew to say, “Mayor not giving Tahoe.”

Who was giving it then?

Not the police, according to spokesman T.J. Smith. “We aren’t involved with any vehicle donation gifting to Shomrim,” he reported back.

Ferguson said he knew nothing about the vehicle.

“This is the first I’ve heard about it,” he said, adding after a pause, “Oh, you know what,  maybe this is Park Heights casino money. They have a separate pot from us.” 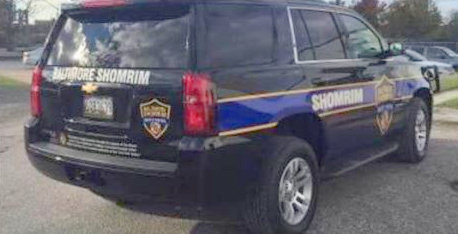 Told that Ferguson had no knowledge of the transaction, McCarthy then steered a reporter to Schleifer. “Casino impact dollars paid for the vehicle – the councilman is the connection,” McCarthy said, reiterating “not the mayor.”

Reached by phone, Schleifer said that about $50,000 had been allocated for the Shomrim vehicle out of Video Lottery Terminals funds allocated for Northwest Baltimore.

Schleifer said he did not request the vehicle. He said the funds for the SUV were allocated before he and Pugh took office and followed state-mandated procedures.

He described the breakdown of VLT spending as 75% for Park Heights and 25% for communities north of Northern Parkway. The vehicle purchase was covered by the 25% north-of-Northern portion of the funds.

“We did present the car to the organization, as the mayor and the councilperson, but all this predates us. We’re just coming up on our first-year anniversary,” he pointed out.

Accompanying the Jewish Life article published yesterday was another piece specifically about the vehicle being given to the patrol group.

“Mayor Pugh Gifts Shomrim New Command Center on Wheels” read the headline on the post, which has since been taken offline.

With the precise provenance of the vehicle murky, online reaction to Pugh’s presentation of the Tahoe to Shomrim included some sharp criticism.

Many saw favoritism in the move and questioned the expenditure of resources to one community when others are suffering more amid the city’s record-setting year for homicides.

“Can Park Heights have some local community police to keep their neighborhood safe? What about Sandtown?” one man wrote on Baltimore Voters Facebook.

Others, citing the non-profit group’s success in working with city police to protect the community, defended the gifting of the vehicle.

“I don’t see this as a bad thing. Maybe it was a spare vehicle that just sat all day. At least it’s going to be helping one community,” another said.

Still others were disturbed by what they saw as the lack of transparency in the move.

“Where is the application form for $100,000 vehicles?” said the page’s moderator, Dave Troy. “The point is that this strategy should be the subject of public discussion, not backroom deals.”

Schleifer said he knows of no other community group or nonprofit in the city that has been awarded a police command vehicle. There has been a request, he added, by members of his district for an ambulance using VLT funds.

“Up in the Northwest, there are some of the most active community organizations and groups in the entire state. The Northwest Citizens Patrol has been around for 35 years. They have been helping the city for 35 years,” he said.

Noting that the 40-member Shomrim group responds to about 250 calls per month and has helped catch carjackers plaguing communities north of Northern Parkway, he said, “Without these kinds of organizations, which serve everybody in the area, not just the Jewish community, there would be a lot of loss of life.”