Attendees were asked to bring “one word of hope and inspiration” to what Mayor Catherine Pugh billed as a candlelight vigil to “honor the families impacted by violence in Baltimore City.”

But in case words failed them after a year of record-setting killings, federal indictments detailing rampant police corruption, body-worn camera videos suggesting planted evidence and the unsolved death of a detective – participants were provided by City Hall with ready-made messages last night.

“VALUED,” “GLORIOUS,” “RESOLUTE,” and, ironically, “SPONTANEOUS” were among the signs clutched by city officials, police brass and regular citizens who filed into the War Memorial Building on a frosty evening. 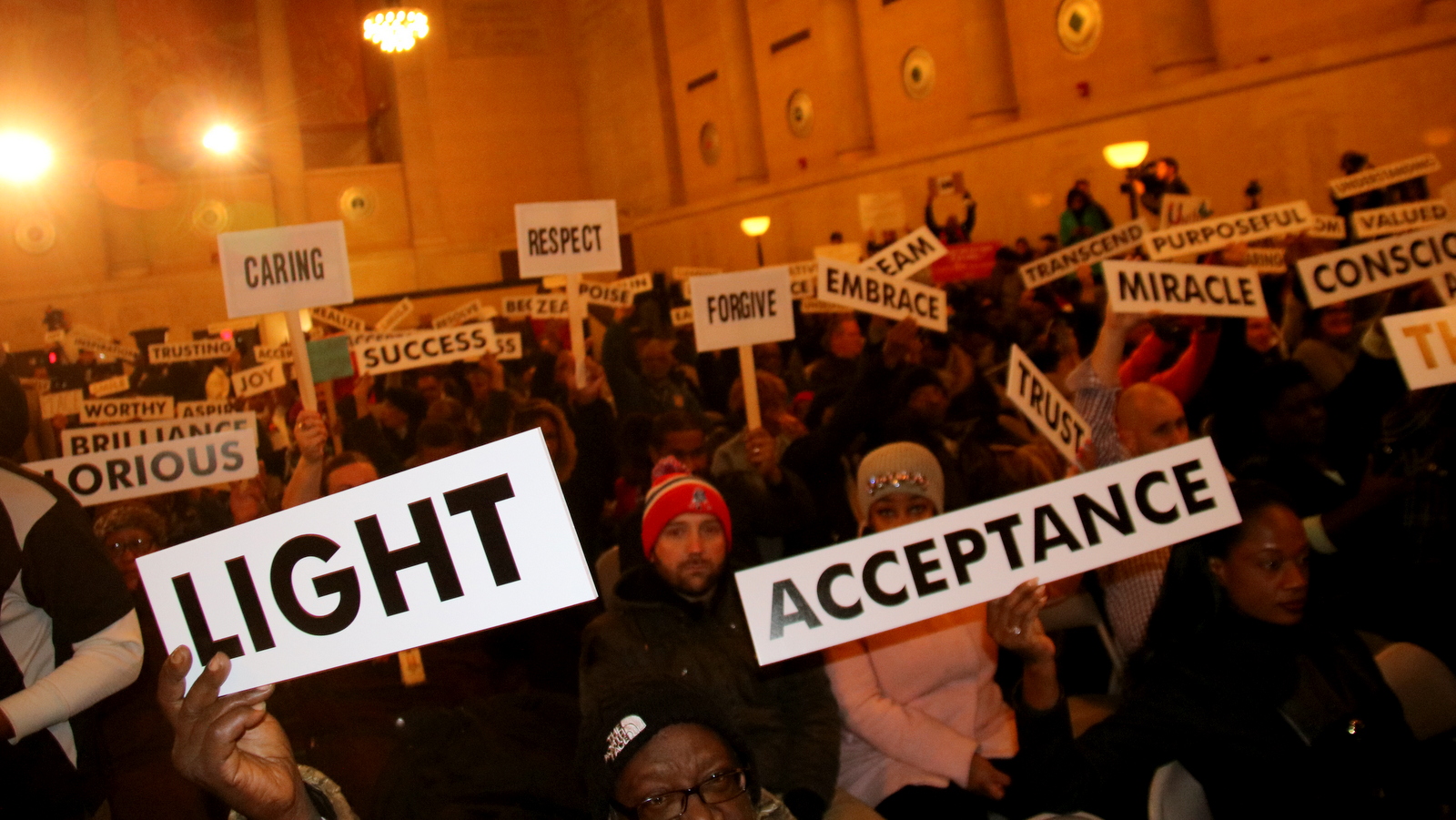 Signs for the event were provided by the city. (Fern Shen)

But even this heavy scripting couldn’t diminish the powerful presence of those who had come because a spouse, parent, child, sibling or friend had been killed.

Most of them just quietly held photos – no placards needed.

“It’s not about healing. It’s not about forgiveness. It’s closure,” said Gretchen Anderson, who held up a sign with the photo of her brother, Daniel Green Jr., killed in 1986. “People need to know what happened to their loved ones.”

Asked what they hoped for beyond the words on their signs, one woman had a litany. “Why are the judges just letting them out? Why aren’t the police solving these cases? Why isn’t the mayor doing something?” 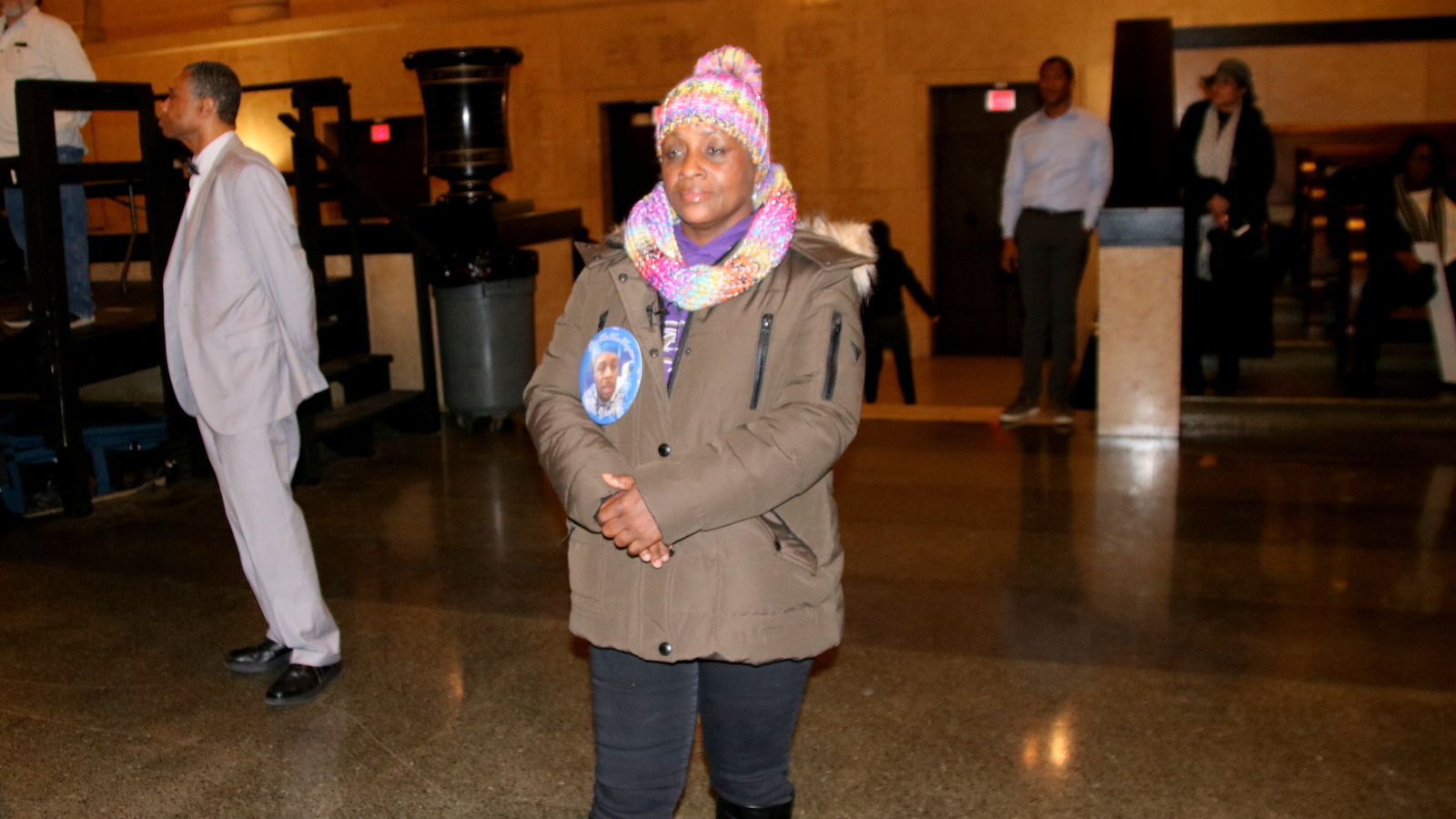 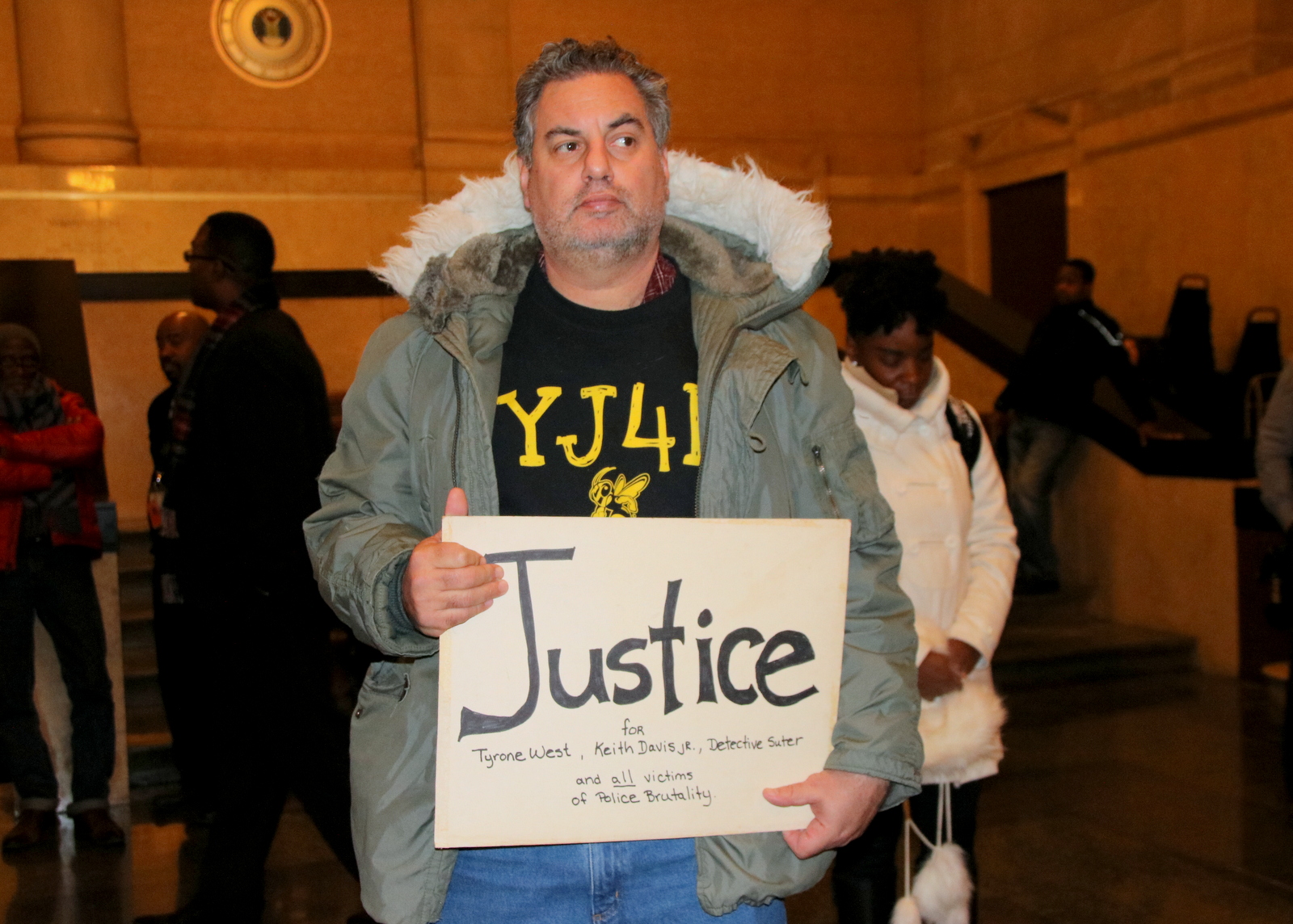 Some passed on the city’s suggested “signs of encouragement” and brought their own. (Fern Shen)

The parents and grandmother of Gregory Riddick Jr., whose murder a year ago remains unsolved, were angry – even though Gregory Riddick Sr. had a handout sign that said “OPTIMISTIC” in his hands.

“He wasn’t a perfect kid, but we’re here tonight in honor of him. He was shot in the back and twice in the leg,” said Riddick, whose family came with support from Roberta’s House, a family grief support center.

“They haven’t made an arrest after all this time,” said Annette Gibson, his mother, her eyes glistening. “Even though we told them who did it.”

Police were less than a block away from the shooting, his father said, but never came to their 26-year-old’s aid.

“This bystander I talked to said he had to call 911,” he said. “By the time the officers finally crossed the street, a car came through and hit our son and dragged him 1,293 feet along Harford Road.” 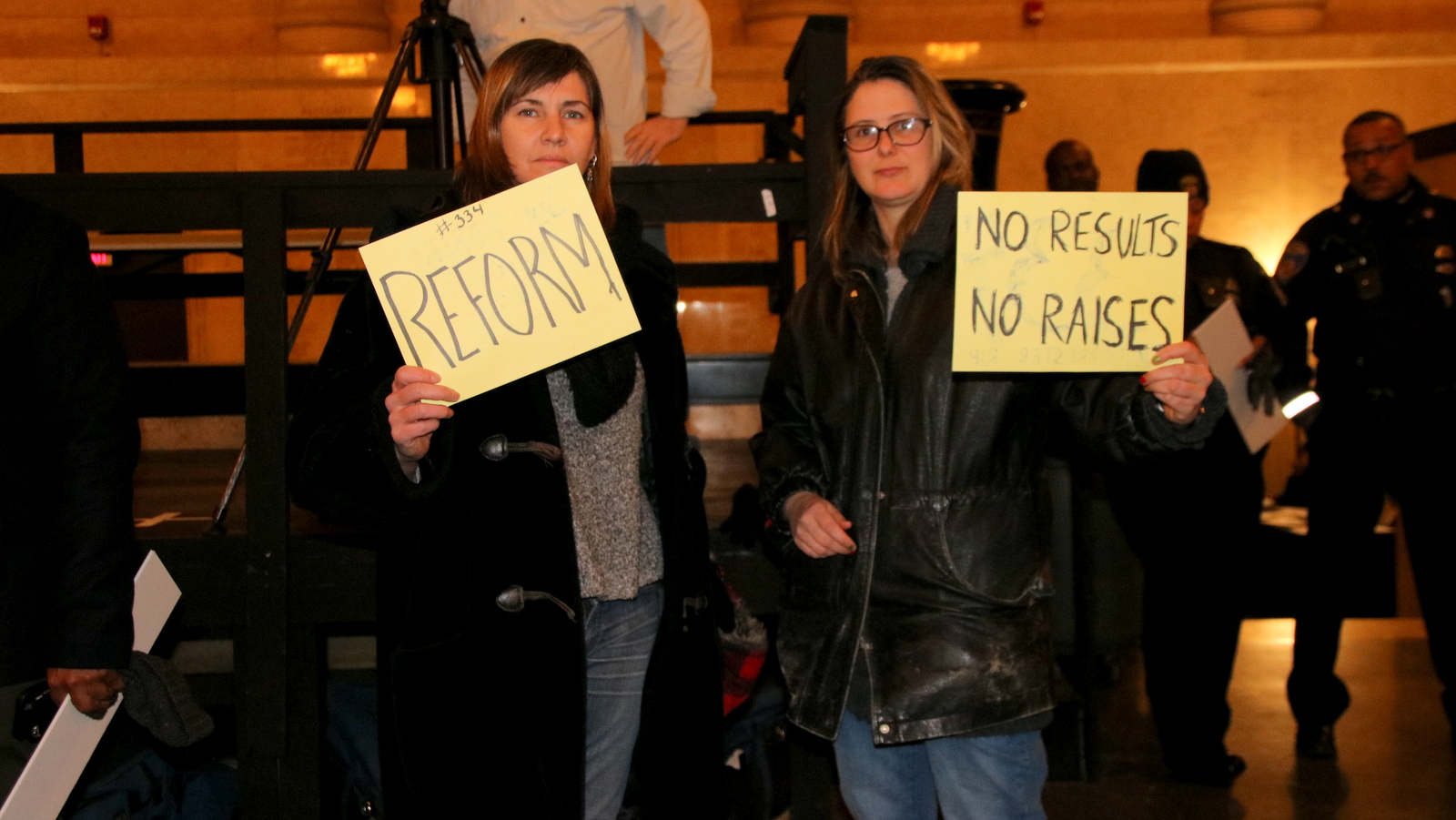 These participants brought their own signs, one of which referred to the raises Mayor Pugh and City Council members will be receiving come January 1. (Fern Shen) 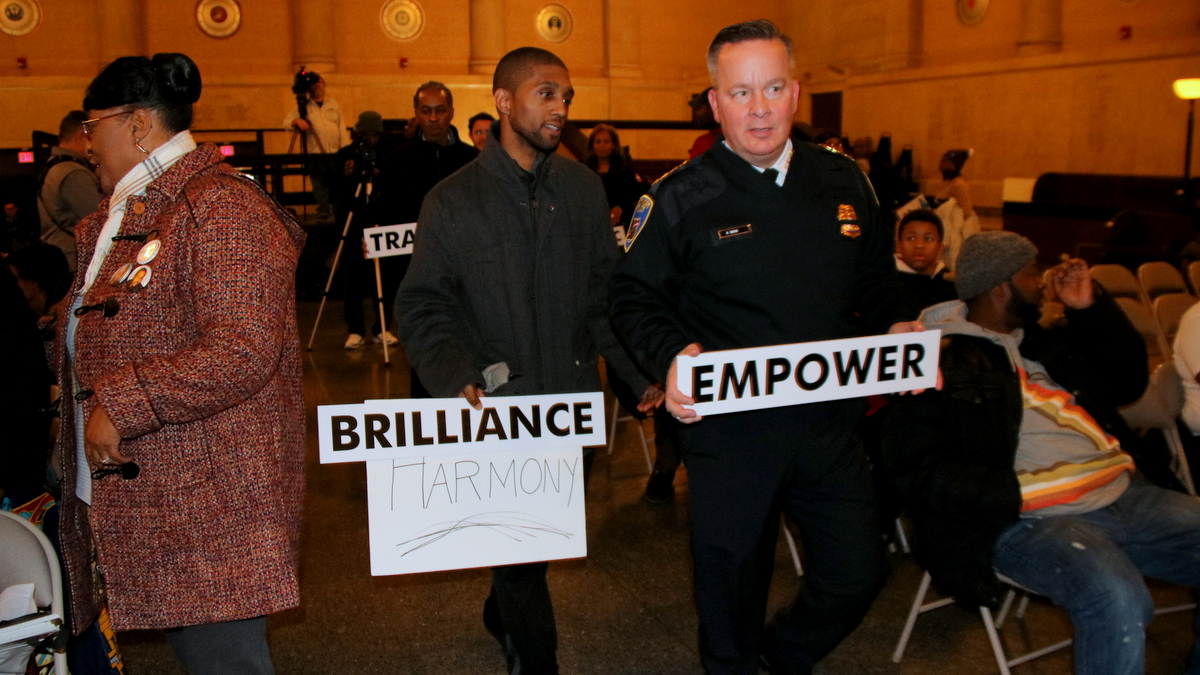 Asked about the other killings in Baltimore – so far 343 in 2017, the highest per-capita in Baltimore’s history – Gibson blamed it on “the same people committing crimes over and over again because they’re able to get away with it. The city is not really doing anything to get them and take them off the streets.”

Wennie Gibson, the murdered man’s grandmother, said no one is holding the police accountable.

“There’s too many bad apples. I’m sick of the Baltimore Police Department,” she said. “They need change from top to bottom.”

Citing the allegations of police officers stealing and planting evidence and the shooting of Baltimore detective Sean Suiter the day before he was to testify about one of the indicted officers, Wennie Gibson said the problems with the police run deep.

“I’m not saying all police are bad. They got some good ones,” she said. “But they need to put the Baltimore City Police Department under receivership and start it all over again.”

When the time came for the audience, at the mayor’s request, to wave their upbeat signs, Riddick’s family held them aloft.

“We will change the future of Baltimore,” Pugh intoned. “This will become the safest city in America.”

There were songs of hope from Davon Fleming, the Baltimore singer who impressed the judges on NBC’s The Voice. And there was a youth choir singing “Let There be Peace on Earth.” 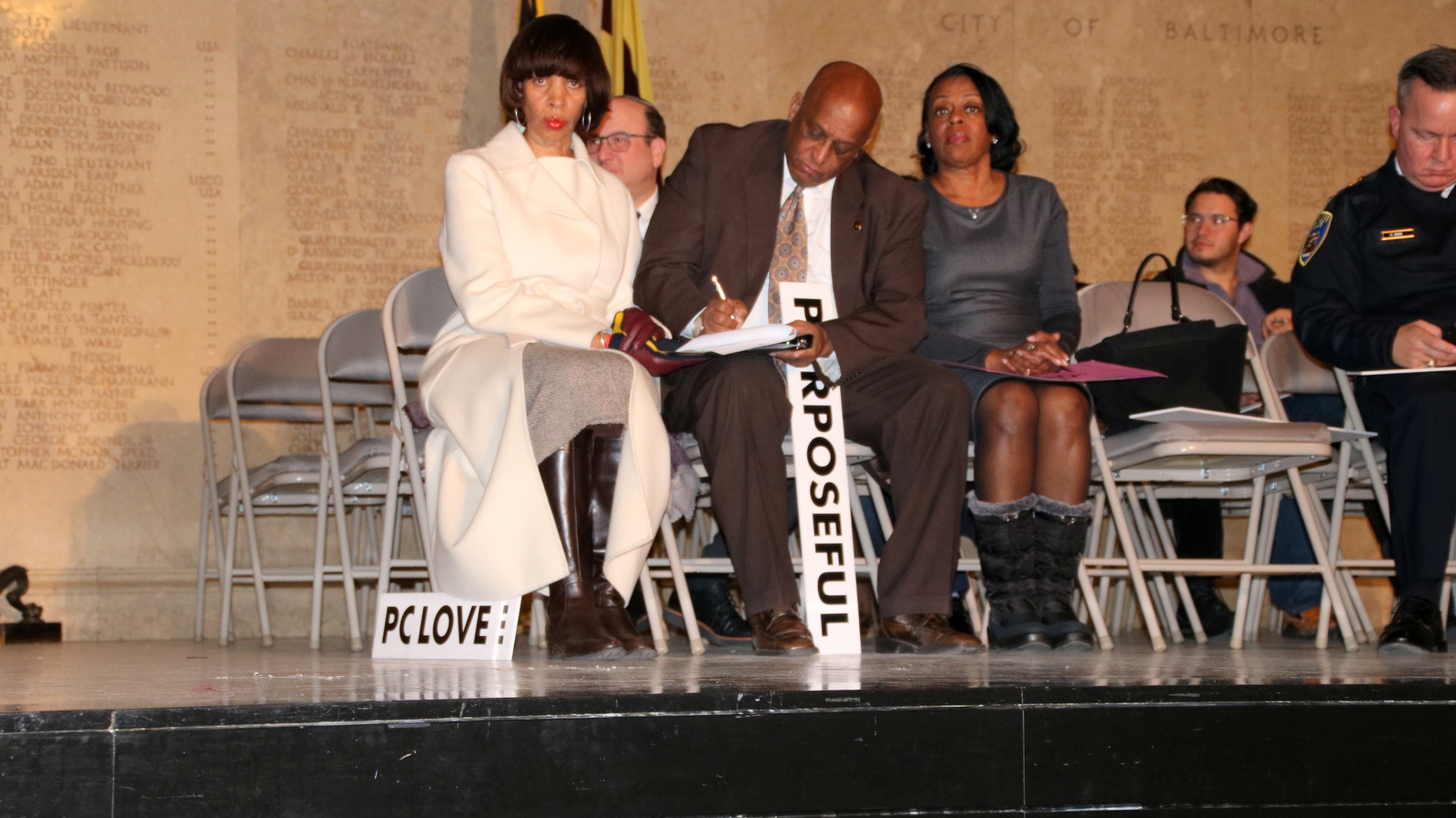 There were moments when audience members were asked to join hands in solidarity and hope for a better 2018.

But there were no candles. Originally planned as an outdoor event on War Memorial Plaza, the vigil was moved indoors because of the frigid weather. Three friends of  Jim Forrester, who was killed outside the Baltimore Tattoo Museum on December 18, had been prepared to stand outside.

“He was just going outside to to talk to his wife on the phone when it happened,” said Kelly Langley, shaking her head. “This has just got to stop.” 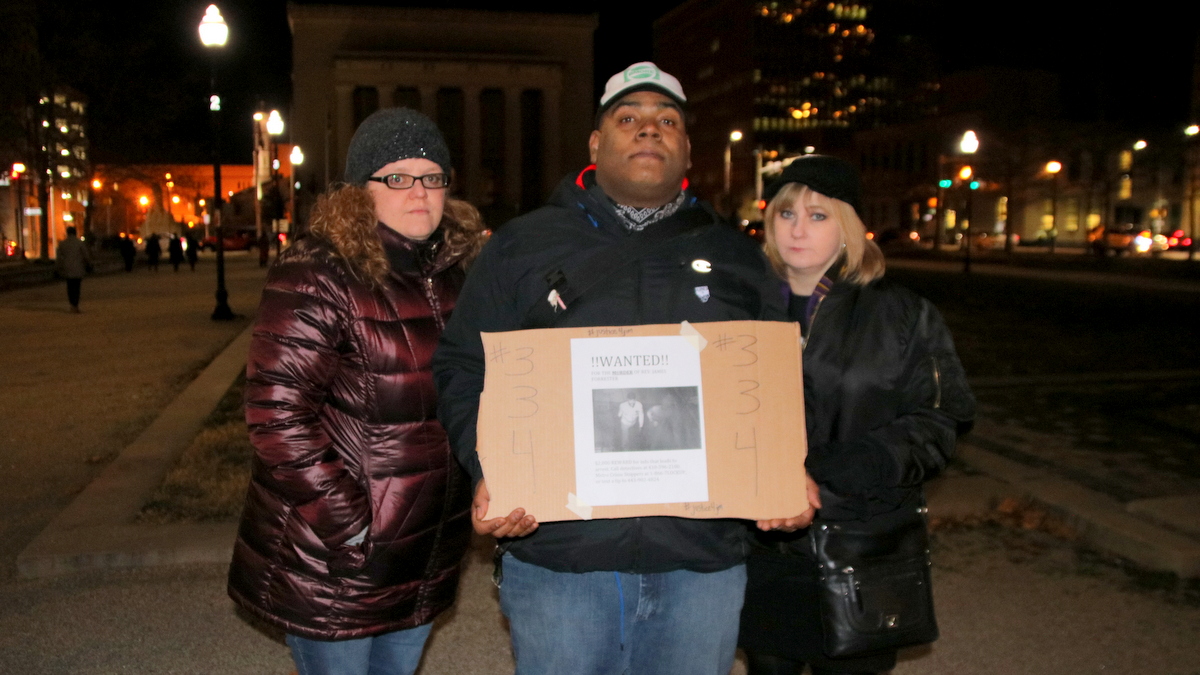 Jen Ayers, Jerrod Sydnor and Kelly Langley were among about a dozen people who came to the vigil to remember slain tattoo artist and musician Jim Forrester. (Fern Shen) 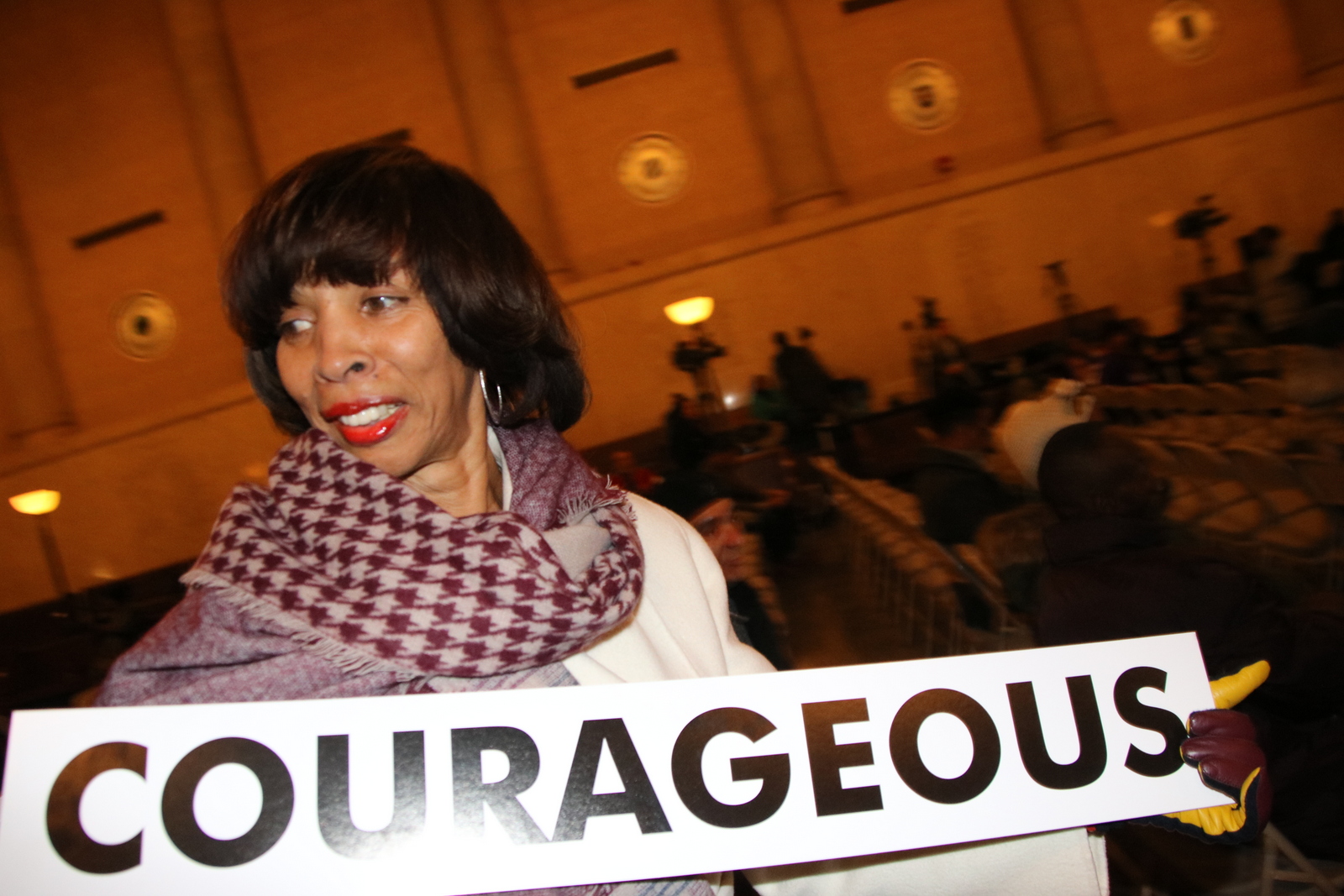 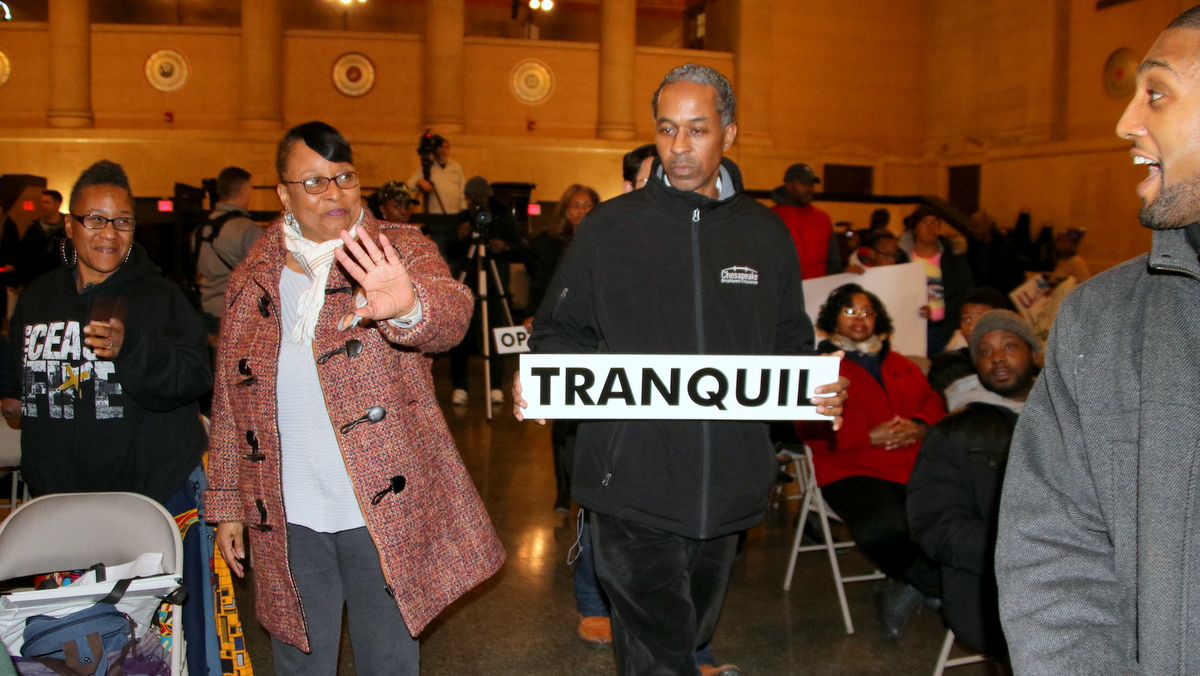 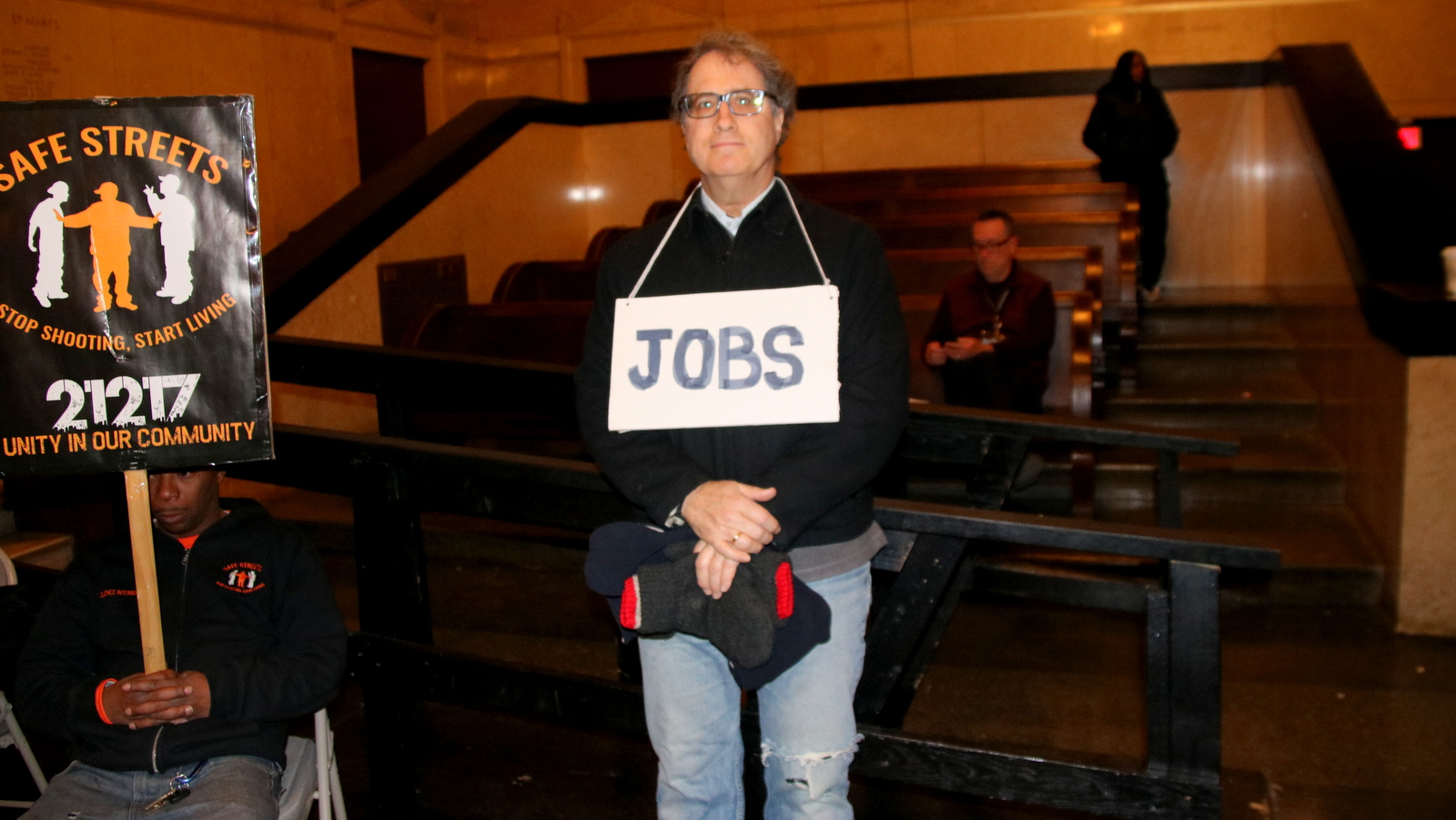 Mark Conner said the mayor should prioritize employment opportunities if she wants to stop the violence. (Fern Shen) 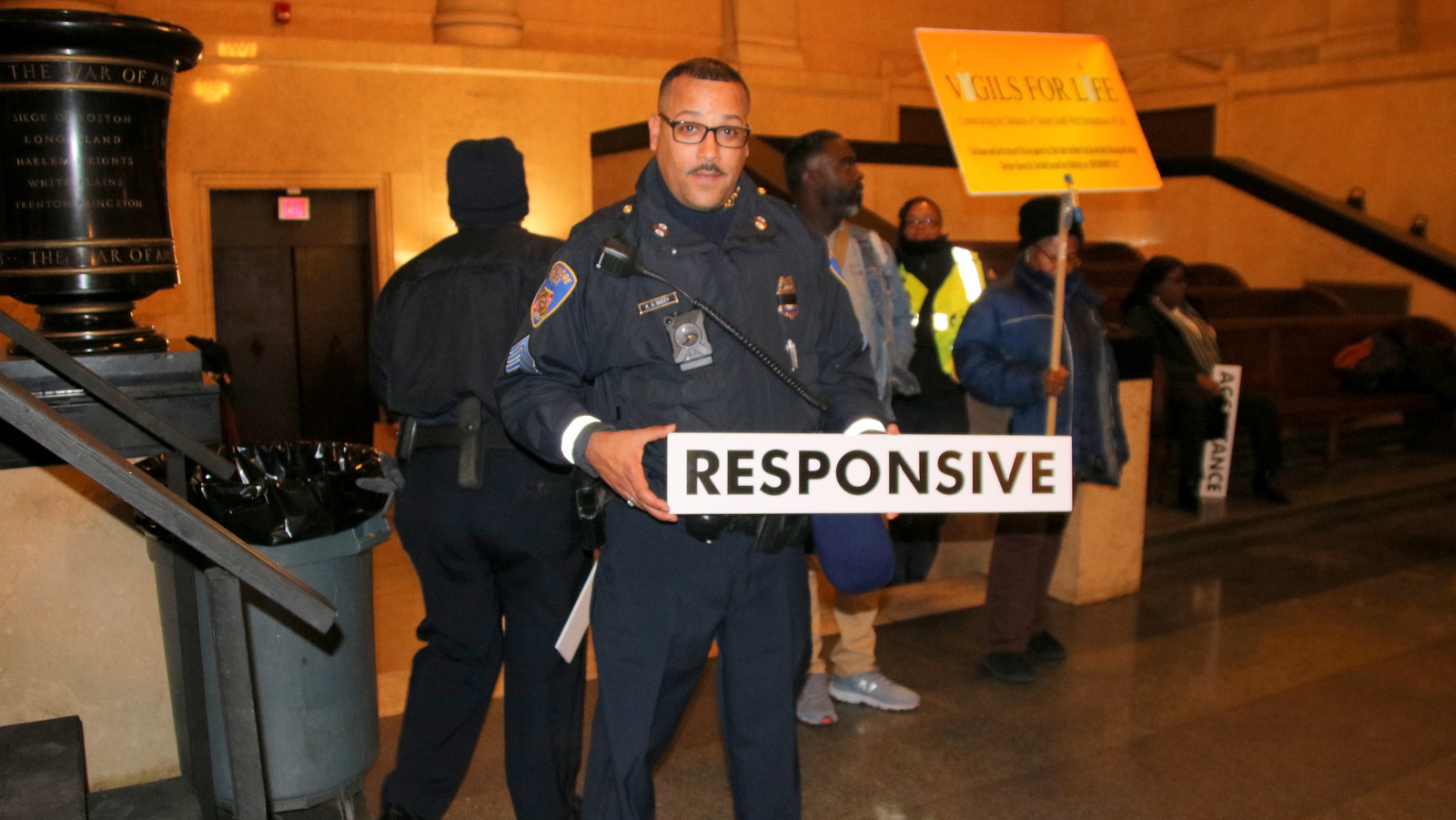 Police officers were among the many city employees who held up pre-printed signs. (Fern Shen)