What to do as mayor after USA Today reviews the data and declares your city “the nation’s most dangerous?”

With a 2017 homicide rate worse than Detroit or New Orleans and 342 people killed, more than every other big city but Chicago?

If you’re Baltimore Mayor Catherine Pugh, you schedule a press conference at police headquarters and highlight some different data.

“Ever since November we’ve been trending downward. . . in every single category,” Pugh told an array of television reporters.

A slide behind her showed homicides were down by 31.9% and non-fatal shootings down by 48.5% from January 1 to February 19, compared to the same period last year.

“Are we satisfied yet? No,” Pugh added, calling on her new commissioner, Darryl De Sousa, to speak about his efforts to reduce crime.

He also pointed to data being gathered at the daily Violence Reduction Initiatives, one of which had just concluded in the 7th floor conference room behind him. 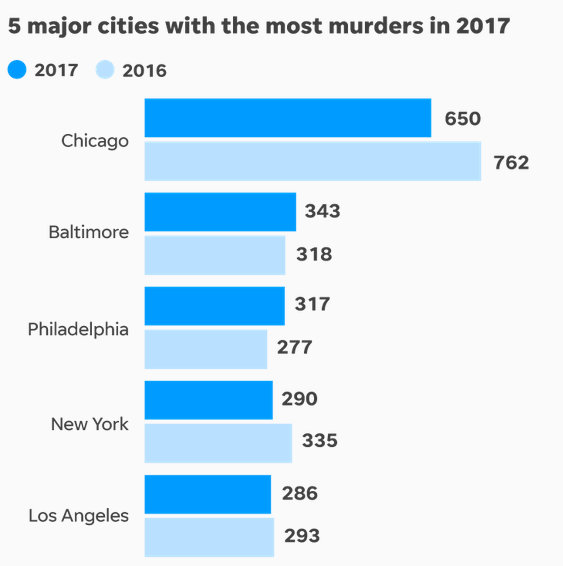 The media was permitted to listen to the tail end of today’s meeting, as officers shared crime stats and representatives of various departments chimed in with data from different zones of the city.

“We did 176 door knocks and 20 home safety inspections,” a fire official said.

“We closed 20 service requests and 75 are in the queue,” someone from the Department of Public Works reported.

“On Wednesday, at Penn-North and Druid Heights, we identified people who really want to work,” another person reported, noting their plans to help them find jobs. “We’re going to take them to Lowe’s,” he said.

Another person relayed reported concern coming from Samuel Taylor Coleridge Elementary School. A location near the school, he said, “is a new spot for homelessness.”

De Sousa pointed to these part of the meeting to highlight the other strategy he said is embracing – community relationships.

“The relationships we’re building – it’s on steroids!” he exclaimed. “And it’s happening in this room.”