The woman in the black sweater and blue sweatshirt known to some as “Donna” was distraught – city workers were picking up her belongings from the side of the road where she has been living and pitching them in the back of a Department of Public Works truck.

She hadn’t given them permission.

“I don’t want them to take it,” she cried out in a low voice, pulling the bags and suitcases back out of the white pick-up as fast as the men put them in.

Advocates for homeless persons who had come to witness Baltimore’s latest encampment clearing today – about a half dozen tents three blocks from City Hall – were agitated, too.

“This city has totally lost its way,” said attorney Carolyn Johnson, of the Homeless Persons Representation Project (HPRP). “You can quote me on that. We oppose all these encampment clearings.”

Johnson pointed out that the workgroup on homelessness created by Mayor Catherine Pugh last year called for Baltimore to “immediately stop the practice of closing encampments and adopt sustainable policies and practices to end homelessness for people living in encampments.”

But the city has moved ahead with encampment clearings anyway, citing health and safety concerns.

But unlike the last razing on Guilford Avenue in January, this one on the Fallsway had not been posted with signs giving notice of the specific date. 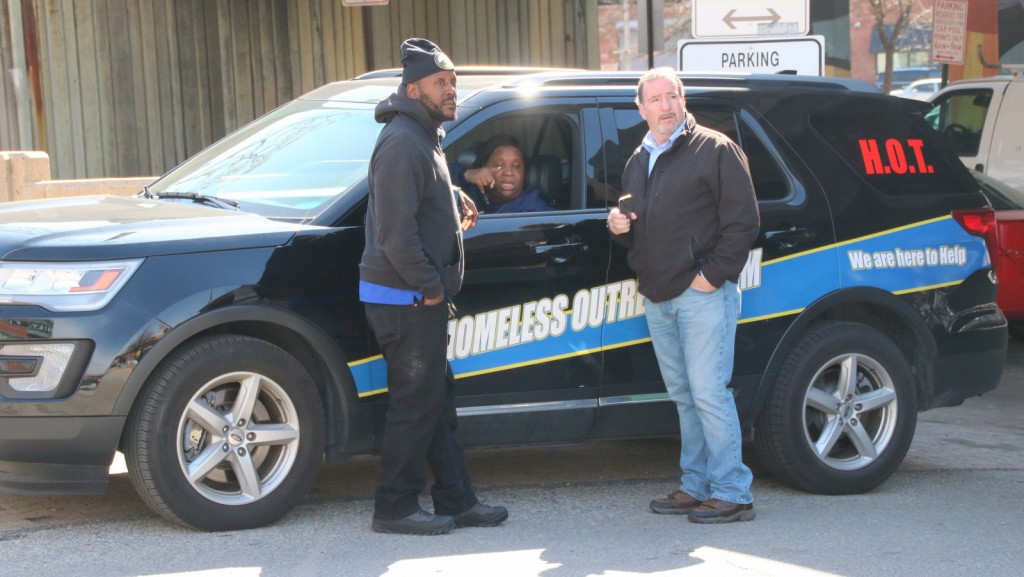 Chris Rafferty, of the Mayor’s Office of Human Services (right), waits with a DPW worker and Baltimore Police as they attempt to evict people from the homeless encampment. (Fern Shen)

“This is just part of the same action on Guilford,” said Chris Rafferty, of the Mayor’s Office of Human Services, who was directing city workers who had come with two green trash trucks.

The people in this encampment, across the street from Health Care for the Homeless, had been given verbal warnings in recent weeks of the impending action, he said.

Some had agreed to go to the Volunteers of America “bridge” shelter on East Monument Street. And now, it appeared, the day had come and the rest had to go. 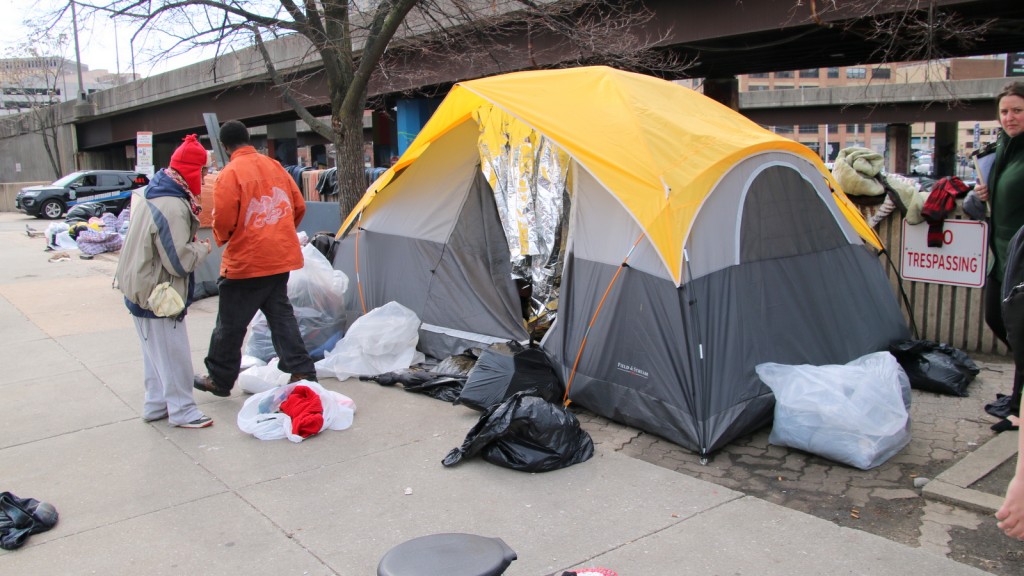 Ordered to leave their tent on the Fallsway, Vincent Christian and Danie’l Stevens pack up their belongings. (Fern Shen)

But those who remained today said they were not ready for the move and did not feel they would be safe at the VOA facility.

“I have nowhere else to go! I wasn’t bothering anybody here!” said Montel Hayes, 24, packing up his belongings and taking down his small tent.

Rafferty stood by watching, backed up by two police officers from the Homelessness Outreach Team (HOT) idling in their vehicle. The DPW crew swept up what Hayes left behind, some clothes and small items, and threw it away.

“They are human beings!”

By early afternoon, however, Rafferty and the others backed off , leaving several tents still standing. The trucks, crews and police drove off – perhaps because the process was not going smoothly.

A reporter and another attorney from HPRP, Karen E. Wabeke, had been photographing and videoing the scene as “Donna” protested the taking of her things. City workers eventually allowed her to reclaim them. She sat on the sidewalk beside her bags and suitcase, swaying.

There had also been an awkward moment when about 25 members of a church group coincidentally showed up to feed people in pretty much the exact spot where the encampment razing was to take place.

Rafferty and the police told them they couldn’t do it, upsetting leaders of the group, Gateway Church of Glen Burnie, who had fed people there before.

“It shouldn’t be so difficult to help people. It’s a simple thing,” said Tiffany Joseph.

“We’re not trying to enable people. But they are human beings. They do need to eat. They are not stray cats.” 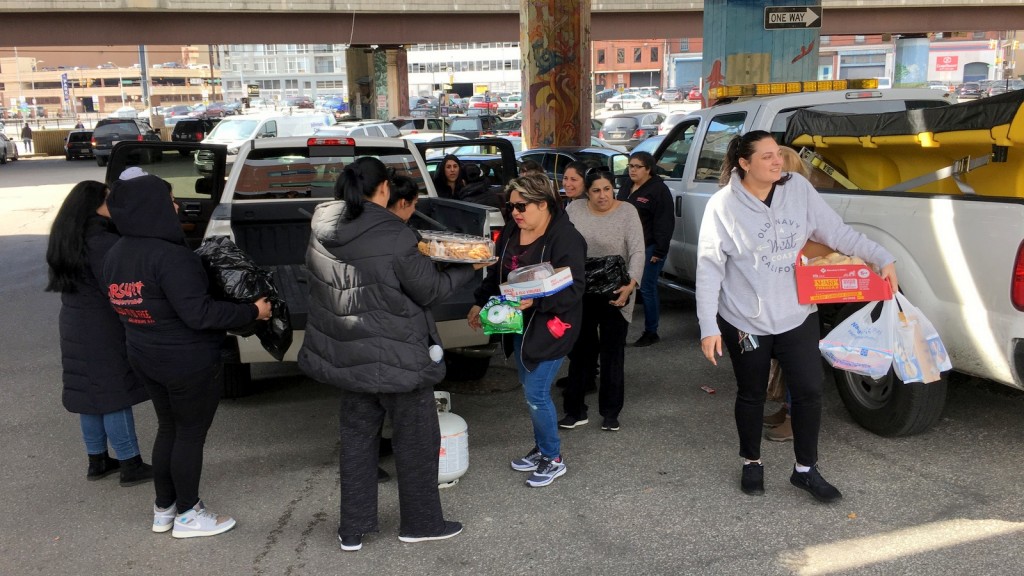 Members of the Gateway Church, of Glen Burnie, barred from setting up a food give-away at an encampment of homeless people because the city was about to clear it. (Fern Shen)

Asked why the group couldn’t set up their tables and give out the pasta, chicken, soft rolls and drinks, Rafferty acknowledged, “It’s not a permit issue.”

“It’s that there are better options for them,” said HOT team’s Det. Verillian Githara, answering for him.

The church group set up its feeding operation a block away from the encampment scene. A long line of people, including women and children, soon formed up.

Asked if she didn’t want to get something to eat, Donna said she was afraid to leave her possessions behind.

Today’s action takes place against the backdrop of the Pugh Administration’s latest initiative on homelessness, a  proposed “Joint Task Force on Street Homelessness.”

The idea is to “develop a plan for how the city will reduce the incidence of street homelessness and encampments,” reviewing best practices from areas that  have addressed these issues “in a successful, human[e] manner.”

This according to a memo by Terry Hickey, the director of the Mayor’s Office of Human Services, sent recently to the group being asked to partner with the city on the task force: the Continuum of Care.

In Johnson’s view, City Hall is creating this latest group because officials there didn’t like the recommendation of the mayor’s last group – that she stop razing encampments.

“I think there are foregone conclusions about what they want to do and this joint task force is just to give them political cover,” Johnson said.

Under Pugh, several of the city’s largest non-profit groups – the Helping Up Mission and United Way, as well as Volunteers of America – have been lined up to receive sizeable contracts to provide homeless services.

Included in the mayor’s  request to the Board of Estimates approved today is $345,000 for five new “Homeless & Outreach Coordinator” positions.

Asked about the Task Force, Hickey told The Brew it “is specifically not meant to be an ‘encampment’ group.’”

“There are many who want to discuss specific strategies for addressing street homelessness and this will give a variety of different stakeholders an opportunity to do so,” he said.

The proposal is on the agenda at tomorrow’s 2 p.m. meeting of the Continuum of Care, a group of providers and advocates given authority under a 2008 federal housing law.

Longtime housing advocate Jeff Singer, a critic of encampment clearing, said he hoped to attend and oppose the forming of the joint task force, as described in Hickey’s memo.

“The ritual repetition of ‘moral’ language – ‘human’ [sic], ‘minimizing harm,’ ’empathy,’ ‘humanity’ – only emphasizes the dishonesty of the actors and the immoral nature of their policy,” Singer said. 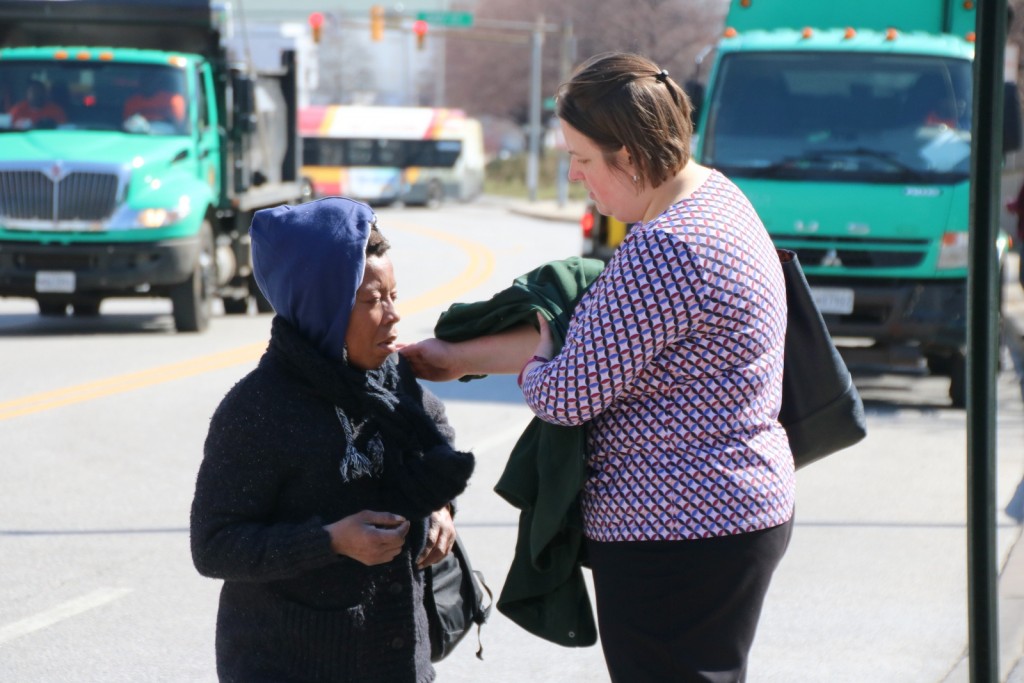 Attorney Karen Wabeke of the Homeless Persons Representation Project comforts Donna after helping her move her belongings out of the roadway. (Fern Shen)

HPRP’s Wabeke said her work with homeless persons in Baltimore has shown her the ineffectiveness of encampment clearings. “They get pushed around like pieces on a chess board,” she said.

Wabeke noted that not all of the people evicted from the tents on Guilford last month ended up at the VOA shelter. Some, she said, have been living at the encampment now being cleared on the Fallsway.

Among her clients who refused to go to the VOA facility was a couple who realized they would not be able to stay together there. So they scraped together enough to rent a room.

But that, in turn, has hurt their eligibility for housing assistance because it may mean they no longer meet the federal definition of “homeless,” Wabeke said.

“It’s one more example of why these encampment clearings are not the way to go,” she said. “They have these unintended consequences. You lose people.” 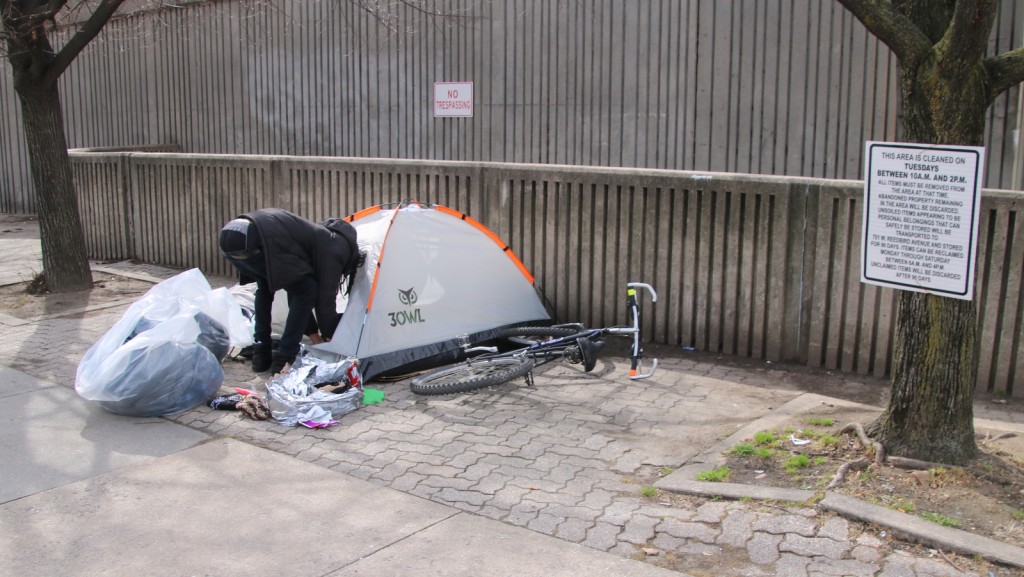 Montel Hayes packing up and preparing to leave the Fallsway encampment. (Fern Shen) 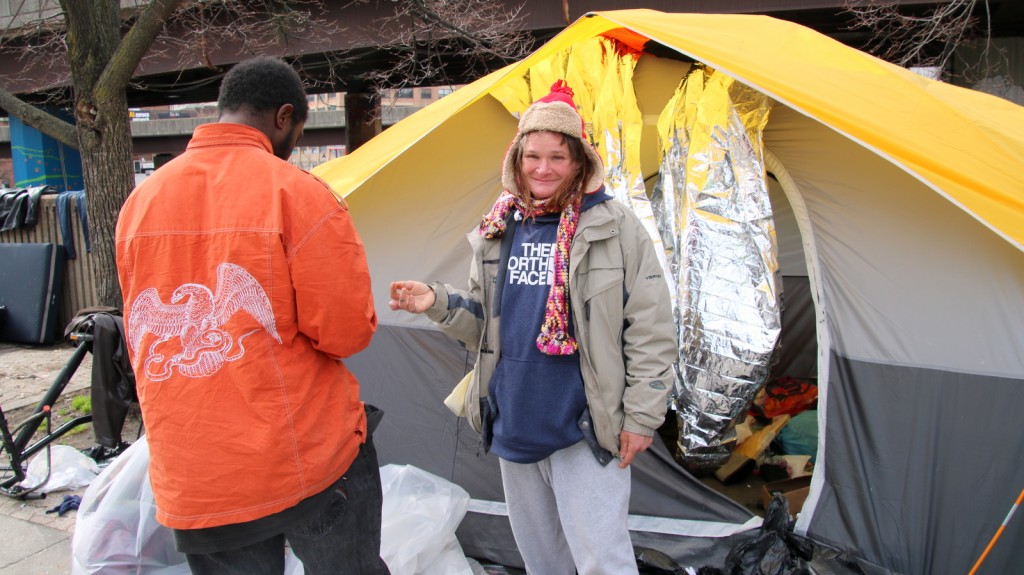