They even had a chair reserved for Oaks, who pleaded guilty to corruption charges last month.

His resignation created a vacancy that drew members of the 41st District Democratic Central Committee to a spacious meeting room at the Forest Park Golf Course last night.

“I was sure he was going to show up,” said Scherod C. Barnes, chairman of the Baltimore City Democratic State Central Committee. “I was prepared to receive him. He had a right to vote.”

Although Oaks proved a no-show, there were other surprises along the way, including the final outcome:

A tie vote to temporarily fill the vacancy created by the disgraced veteran politician. 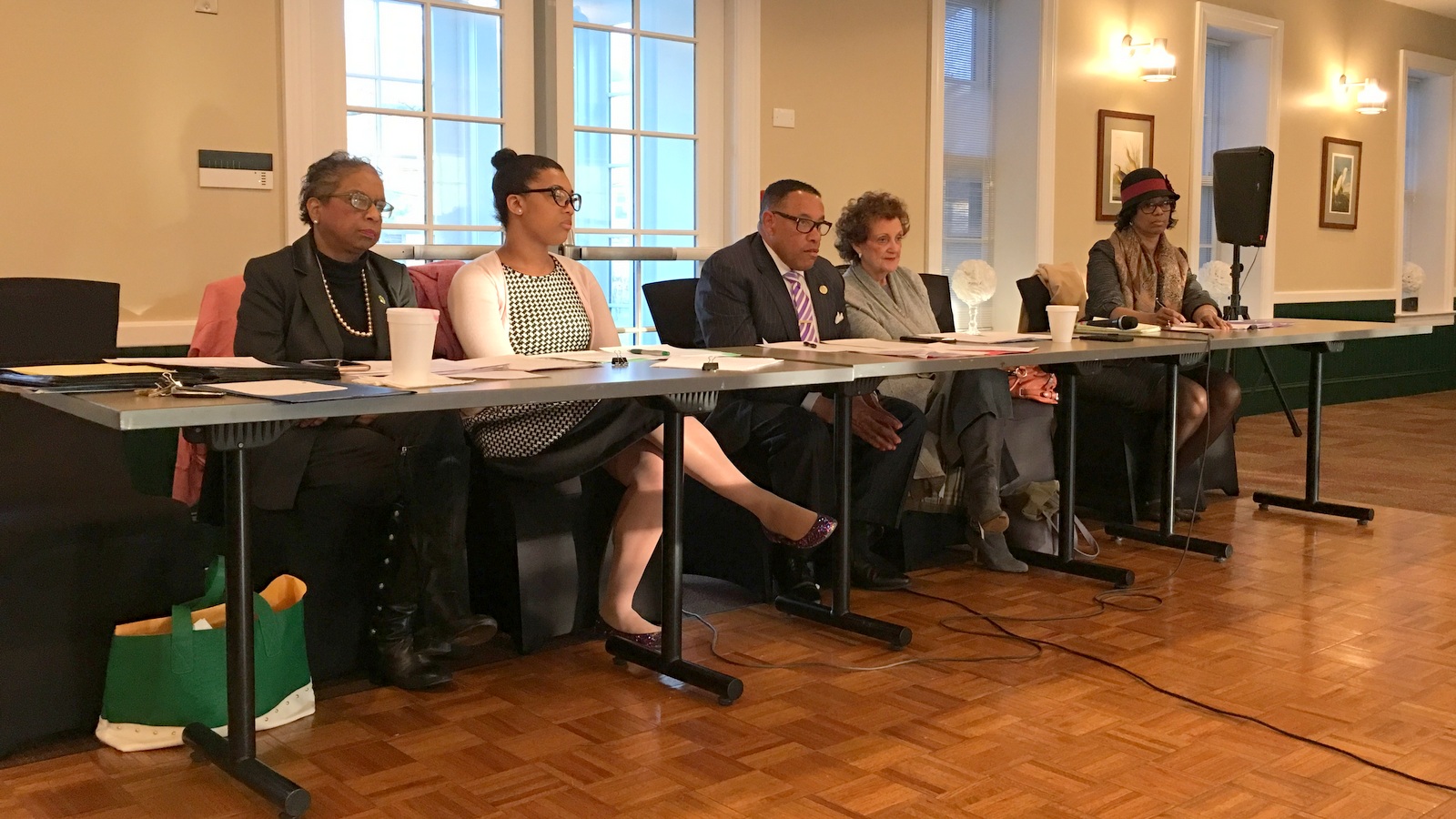 That made for another awkward feature of the evening’s proceedings:

Smith, a member of the Central Committee, repeatedly voted for “Joyce Smith.” After sitting before the panel and pitching herself (“My integrity has never been questioned!”), she voted five times, on five successive ballots, for herself.

Afterwards, Del. Angela C. Gibson, who chairs the 41st District Committee, explained that voting for oneself is permitted under state party rules.

“It’s not that unusual in the city,” she said. “It’s happened a number of times.”

The process began with interviews, with all of the candidates acknowledging a limitation of the vacancy they hoped to fill:

It only lasts until whoever is elected to the seat in November takes office.

“I’m a realist – it’s an eight month position,” said Gary Brooks, who described himself as “a mom-and-pop attorney” with “good interpersonal skills.” He also told the committee, “I will be a nice caretaker.”

Another candidate offered some impressive credentials, but when it came to one of the evening’s standard questions – Should state and federal money be used to support the Pimlico Race Course? – James Butler tanked.

“It’s a private entity,” he said, “and maybe not the best place to continue to spend money,” prompting a member of the audience to crack, “Well, he just blew it.”

Wade Moragne-el, who had also submitted his name for consideration, did not show up.

Next came Carter, who is on the ballot in the June 26 Democratic primary, along with former city schoolteacher J.D. Merrill.

(Merrill, likening the replacement vote to “a backroom deal,” chose not to seek the interim Senate seat and was not present last night. Oaks is also on the primary ballot, though a petition to have him thrown off has been submitted to city party officials.)

“I was somewhat of a political outsider,” said Carter, who left Annapolis to become director of the Office of Civil Rights  under Mayor Catherine Pugh.

“I thought I was leaving the district in very capable hands,” Carter observed, “but as you see, all kinds of chaos ensued.” 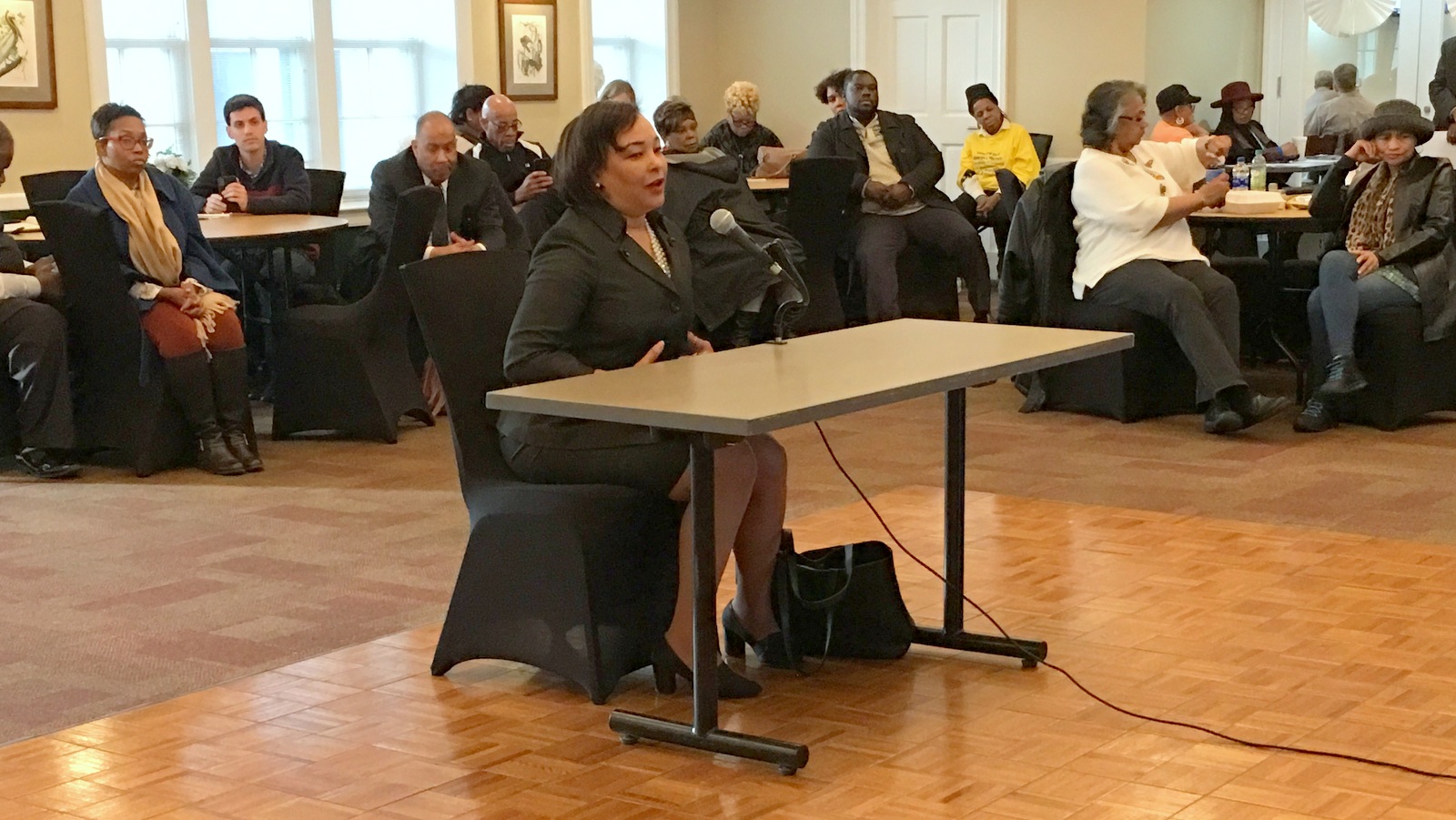 When Smith’s turn came, she stressed more that she is an insider, a 40-plus year resident of the district and 12-year member of the Central Committee.

“I didn’t just get here, and I didn’t just decide to do this,” said Smith, who is the sister of 45th District Delegate Cheryl D. Glenn.

Glancingly, Smith addressed the fact that she is also running for a seat on the House of Delegates.

(“I guess she will run around the 41st District saying, ‘Hello, I’m Senator Joyce Smith and I would like to be your next delegate,’” a commenter joked on Facebook last night.)

The other candidates interviewed included Charles Smith, Shawn Z. Tarrant, a former two-term delegate member from the 40th District, and Jay Steinmetz, a Mt. Washington businessman who made an unusual offer:

He said he would serve in the interim position for free.

Barnes then supervised the voting over the course of five ballots. Spector, who previously declared herself sour on the whole process, declined to vote every time. On the first four ballots:

Even on the fifth ballot, after Barnes had invoked the rules and removed Tarrant, the lowest vote-getter, the deadlock remained.

Gibson then cast a “no” vote, leaving her ballot blank.

Afterwards she was asked if the vote went according to plan.

“It should have been one unified recommendation to the governor – one choice, one appointment,” she replied.

Hogan now has 15 days to make the appointment to fill the seat.

Barnes said he would immediately begin the process of removing Oaks from the district’s Central Committee, after receiving a petition with about 70 names of residents asking him to do so.

State election officials have said that Oaks’ name cannot be removed because his sentencing on felony wire fraud charges does not take place until three weeks after the primary.