Citizens hoping to find out how Baltimore Detective Sean Suiter was mortally wounded with his own gun in November already knew the Independent Review Board (IRB) was not being convened to produce an answer.

“We are not going to re-investigate the homicide,” chairman James K. “Chips” Stewart said, underlining that point at the IRB’s first public meeting today.

The board would be reviewing the way Suiter’s death was investigated and whether “best practices” were followed, Stewart and Police Commissioner Darryl De Sousa made clear.

It would look at “crime scene investigation . . . incident command itself, how we did as a group,” De Sousa said, formally “charging” the IRB in front of a scrum of media assembled at police headquarters.

“I was on the scene when the incident occurred. I actually responded relatively quick to the scene,” De Sousa said. “Did we set up incident command quick enough? Did we take a look at the entire area and try and figure out the best place for us to go and set an inner perimeter and outer perimeter up?” 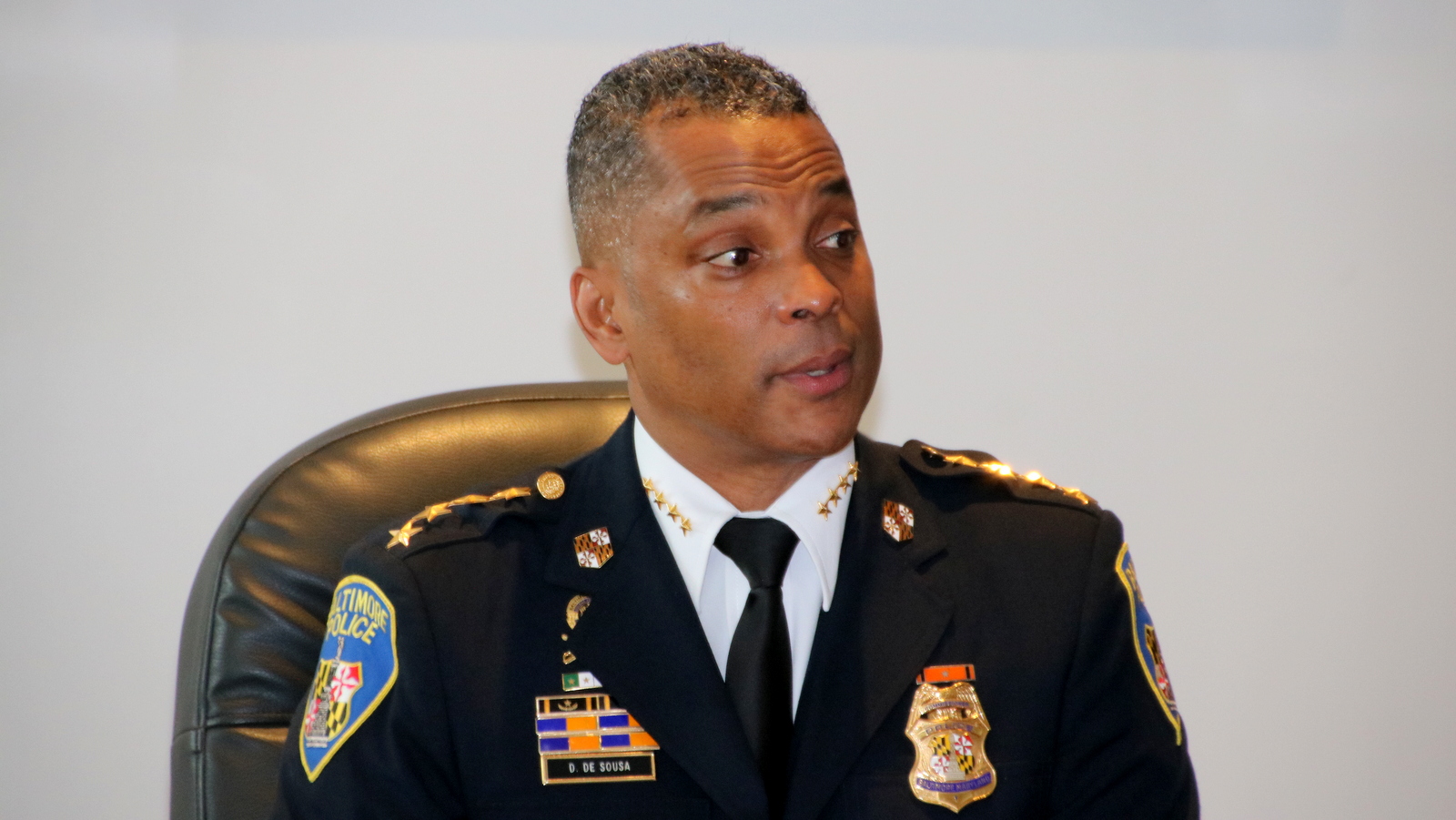 That “perimeter” is part of one of the most controversial aspects of the still-unsolved shooting of the veteran detective, a day before he was to testify before a federal grand jury in the case against a squad of officers indicted in the Gun Trace Task Force prosecution.

Police cordoned off a portion of the Harlem Park neighborhood for nearly a week, preventing cars and pedestrians from entering, requiring people to show an identification paper to get to their homes and, many complained, patting people down and treating them roughly.

Expressing grave concerns about the way police handled the situation, the American Civil Liberties Union of Maryland has sought body camera footage from the lock-down.

Today that aspect of the IRB’s review was described in muted terms – the words “civil rights” and “constitutional policing” were never uttered.

“We are also looking into the interaction with the public and the community in terms of how this tragic event – and sort of make recommendations of ways that there could be healing in the community,” Stewart said. 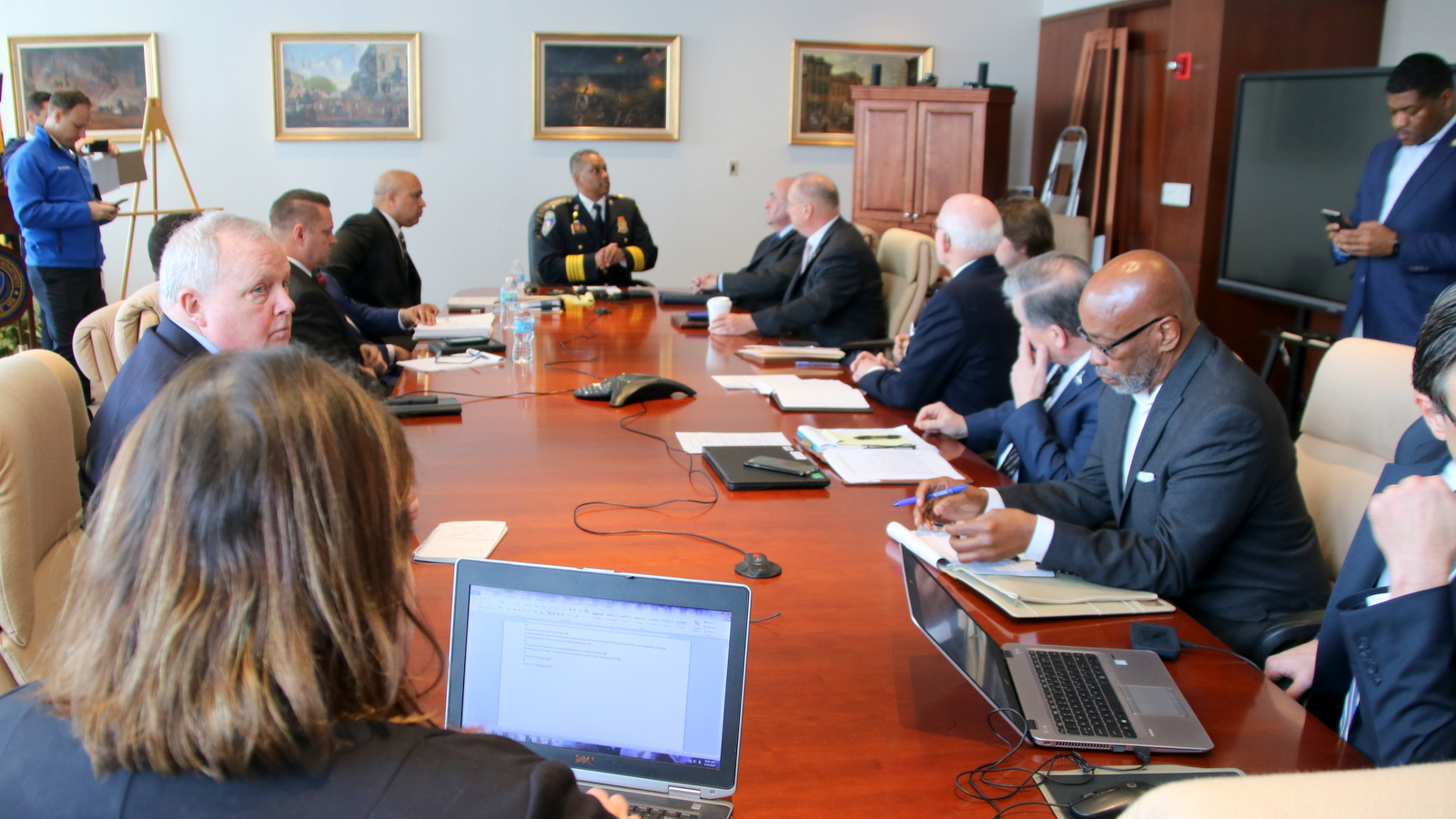 Describing his concern about the “security” of Harlem Park, De Sousa said the IRB would look at “how we secured that perimeter” and in future instances “whether we tighten up the inner perimeter tighter, make the exterior perimeter larger.”

Toward “building trust in the community,” he said the panel would look at “are we transparent with the community we serve?”

In closing, De Sousa called the IRB’s work “a comprehensive review of what happened on November 15” and urged the members to “go where the evidence leads.”

The Board of Estimates recently approved $149,000 for a review by the board, composed of seven law enforcement analysts and policing experts.

Stewart and another member of the group, James R. “Chip” Goldren Jr., are both with the Arlington, Va.-based consultants CNA, which is leading the process.

“Collectively we probably have several hundred years of homicide investigative experience,” Stewart said, looking around the room at the group.

(All were present except Gary Childs, one of two former city homicide detectives on the board. Childs attended via speaker phone.)

The introductory comments formed only a fraction of the panel’s agenda – it ejected the media before turning to the substantive portion of its meeting.

Yesterday the ACLU questioned the legal basis for some of the closed door sessions.

Today, guided by an attorney from the city law department who sat by his side, Stewart cited the board’s justification for them.

• Why was discussing compliance with the state Open Meetings Act (Item #2 on the agenda) closed to the press? “Attorney-client privilege,” Stewart said.

• Compliance with BPD policies and practices. “Any compliance issues could have disciplinary and other performance consequences,” Stewart said.

• BPD compliance with all laws governing public police actions, criminal investigations and associated records. Stewart said “the board expects that at various points it will require the advice of legal counsel.”

The board members voted unanimously to close the meeting. Stewart said they would release their report “in 90 to 180 days.”