The Independent Review Board looking into the death of Baltimore Police Detective Sean Suiter will offer the public a report, its chairman said today, that will include its conclusion on a key question:

Did the 43-year-old Suiter shoot himself in a vacant lot in West Baltimore last November 15 or was he shot by someone else?

“We have information that will reach a conclusion,” IRB chairman James K. “Chips” Stewart told reporters, and that information will be published in a final report to be released next month.

As happened at the board’s two previous meetings, the press was ushered out of the meeting room today so that panel members could go into executive session.

Tops on today’s agenda, he said, was reaching consensus on the panel’s preliminary findings. What are those findings, a reporter asked.

“They still remain confidential because they will undoubtedly change and be refined as we go through our discussion and analysis,” Stewart answered. “In the last hour, we just completed another interview.”

How many people have been interviewed, Stewart was asked.

How about the group that is monitoring Baltimore’s compliance with the U.S. Justice Department consent decree?

His remarks represent the latest official response to a mysterious death that has deepened concern about corruption at the Baltimore Police Department.

The 18-year veteran was shot in broad daylight in the 900 block of Bennett Place where he had reportedly gone to investigate a triple homicide from 2016.

The shooting took place a day before he was set to testify before a federal grand jury that was investigating the activities of the since-convicted members of the Gun Trace Task Force.

Police said Suiter was found shot in the head at close range with his own service weapon, which was recovered at the scene. A man in a black jacket with a white stripe had been spotted in the area just before the shooting, police initially said, and a $215,000 reward for information was announced. 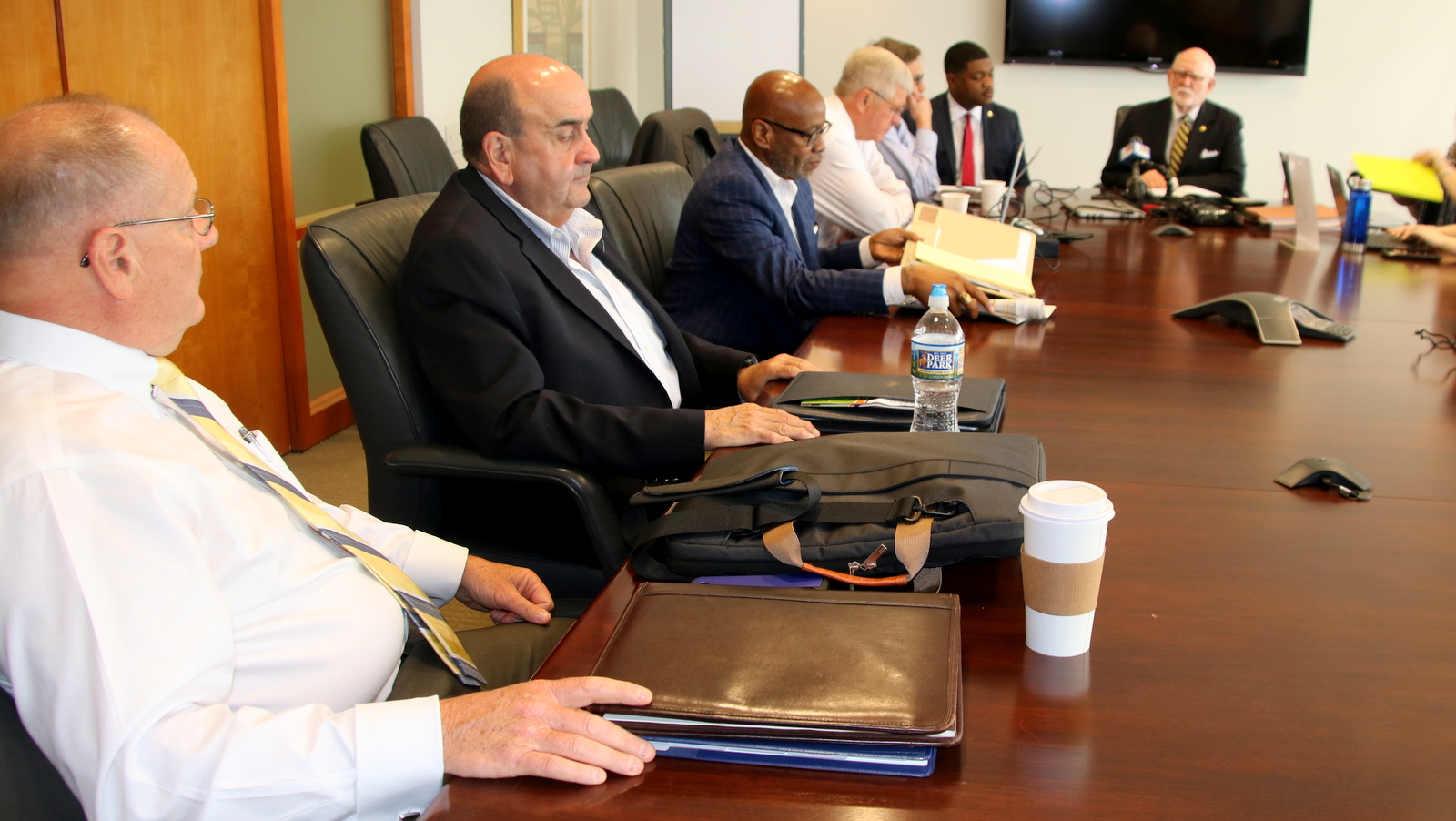 Chairman James Stewart (far right) said the Independent Review Board combed through “voluminous evidence” as it looked into the death of Baltimore police detective Sean Suiter. Police spokesman T.J. Smith is to his left. (Fern Shen)

Since then, there have been media reports of police speculation that Suiter may have committed suicide, a theory that family members have rejected.

The case remains unsolved. No arrests have been made.

“There’s still a $215,00 reward,” he said during the panel meeting held in the downtown offices of the law firm DLA Piper.

He noted today that the board is not just reviewing BPD’s investigation into Suiter’s death, but “the police response and incident management in the Harlem Park area” afterwards.

Police locked down the neighborhood for about a week after the shooting, sparking a furor among residents and activists.

People attempting to walk or drive into a cordoned-off area were stopped, questioned, asked for identification and, in some cases, prevented from entering their own homes by police. Some residents said they were questioned harshly and patted down. 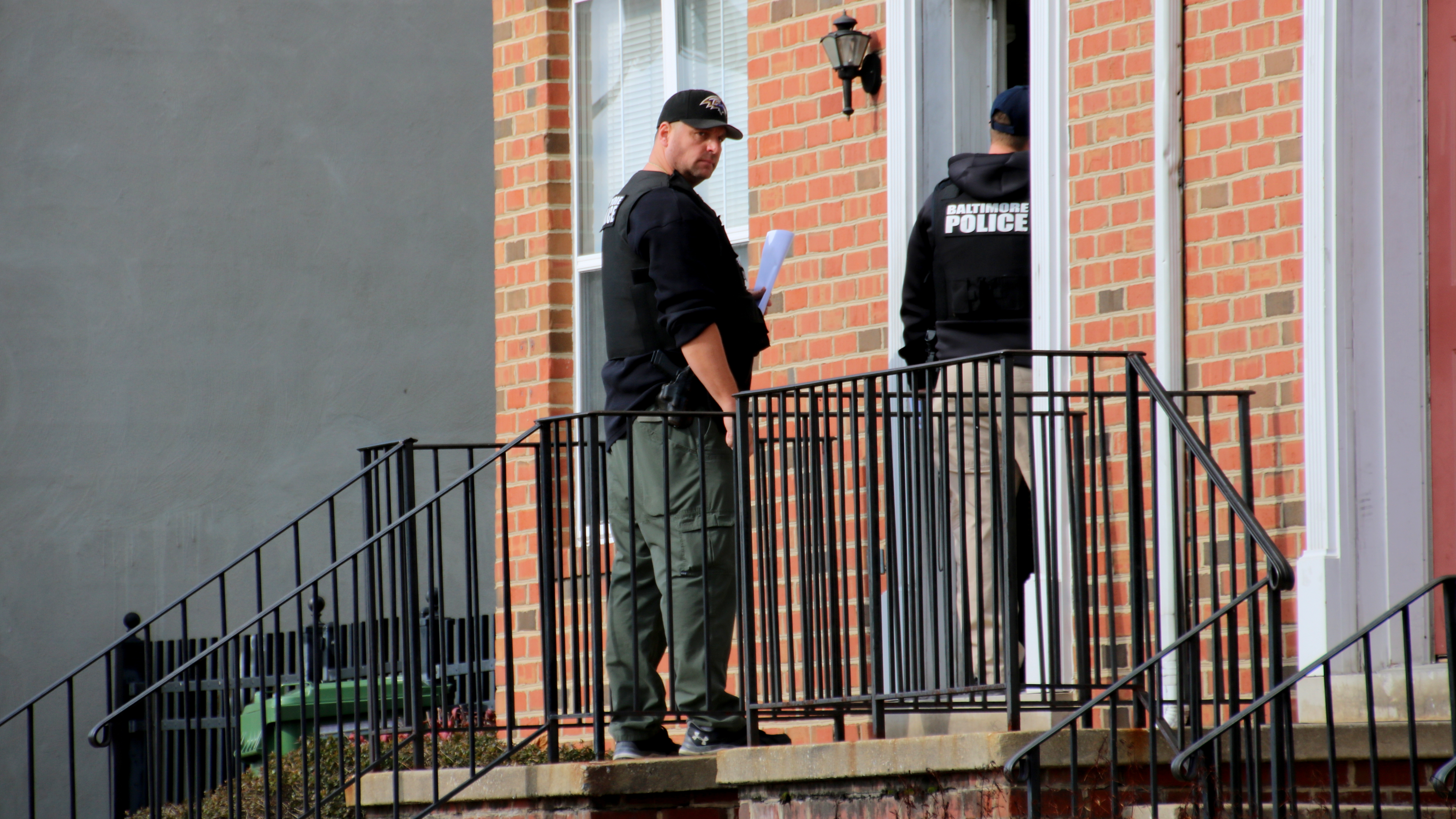 Smith said today that the BPD was prepared for the board to highlight problems at the department. “We get better. We [can] find out if there were shortcomings, and see what we can do to fill those gaps,” he said.

The Police Department has provided the board with “thousands of pages of internal correspondence and documents,” Stewart said, as well as hundreds of hours of videos, digital images, photos, crime scene diagrams, crime scene logs, and more.

Stewart was asked if, as part of the board’s investigation, Harlem Park residents were interviewed.