The seven people pictured above have lived peaceably in the middle-class neighborhood of Ashburton for a total of 295 years.

But no more, they say.

Over the last two months, they have watched a contractor for the city cut down almost every tree in Hanlon Park – 198 trees in all, many of them old-growth – and turn the park into a desolate zone of piled dirt and debris.

What’s more, they recently discovered that neither the city nor the contractor ever tested the soil for contaminants before bringing in the earthmovers.

Subsequent tests show that the soil has elevated levels of hexavalent chromium (CrVI), a cancer-causing chemical, as well as significant traces of arsenic and nickel.

Last night, they and other residents of Ashburton rebelled – lashing out at Department of Public Works officials who are managing the $137 million project to build two water tanks underneath Hanlon Park.

“You just laid waste to an entire park,” shouted another resident.

“You took our trees. You destroyed a hundred years of history,” grumbled a third.

“You just laid waste to an entire park,” shouted another resident.

“We want this soil removed,” insisted Batts, as the presidents of the Ashburton Area Association, the Hanlon Improvement Association and other residents nodded in agreement.

The community’s reaction comes in the wake of multiple problems in another tank-building project by the same contractor.

An old-growth tree lies across Liberty Heights Avenue from the Heritage United Church of Christ. BELOW: The stacked remains of some of the 198 trees cut down for the project. (Mark Reutter) 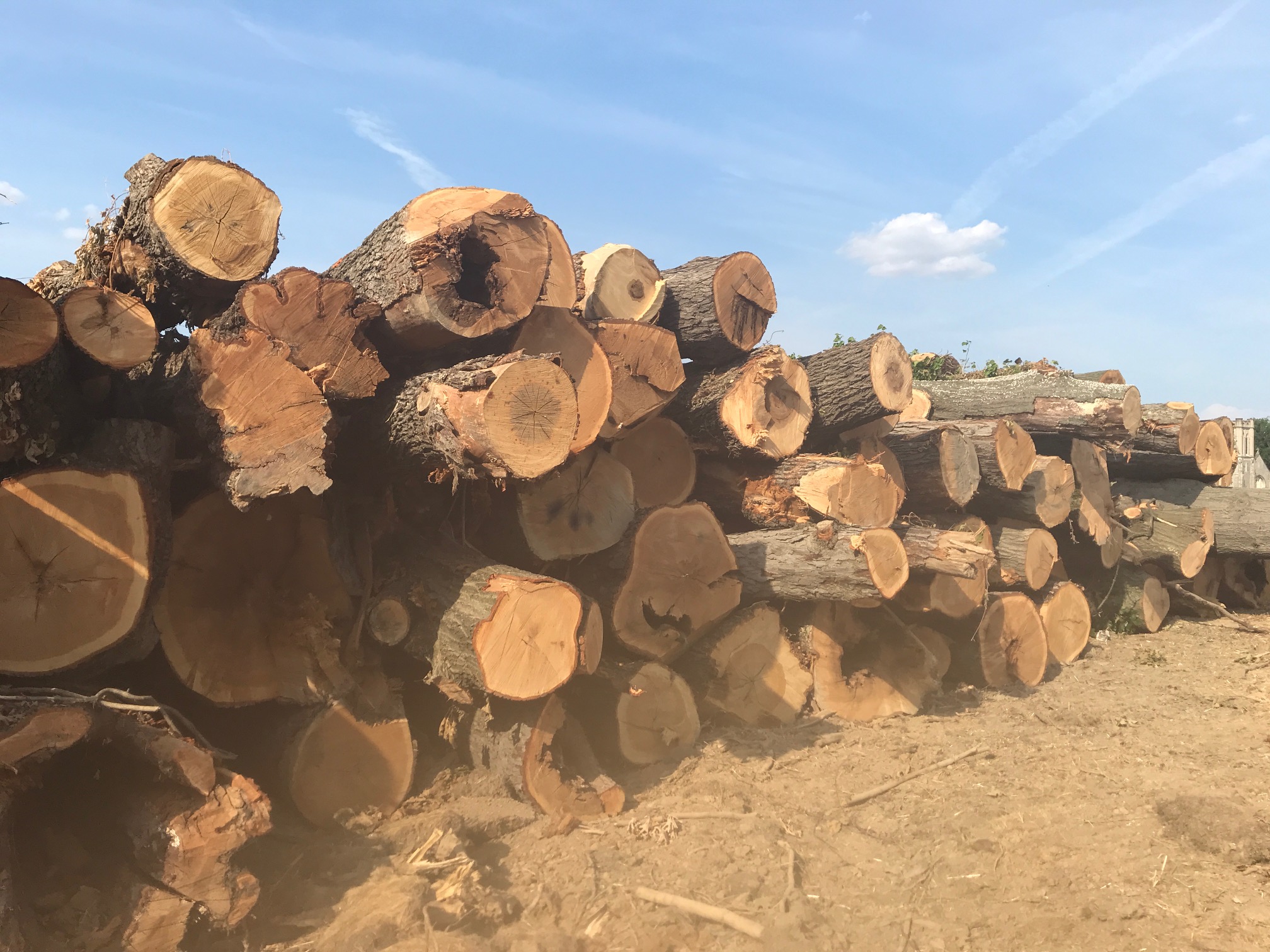 Last week, investigators from the Maryland Department of the Environment (MDE) caught Oscar Renda Contracting dumping illegal levels of chlorinated water into the Jones Falls from the Druid Lake reservoir at nearby Druid Hill Park.

Just days before, a top DPW official told the City Council that the agency was making sure that water released into the Jones Falls was de-chlorinated and met all MDE standards.

“Clearly, we could have and should have done more,” he said. “But we have been in the communities, especially Hanlon.”

His words – as well as a plea by DPW’s chief of engineering and construction that “we really do have your best interests in mind” – did little to lessen the tension in the room.

“You messed up,” he said, outlining what he called DPW’s failure to properly inform the community of the destruction coming to Hanlon Park. 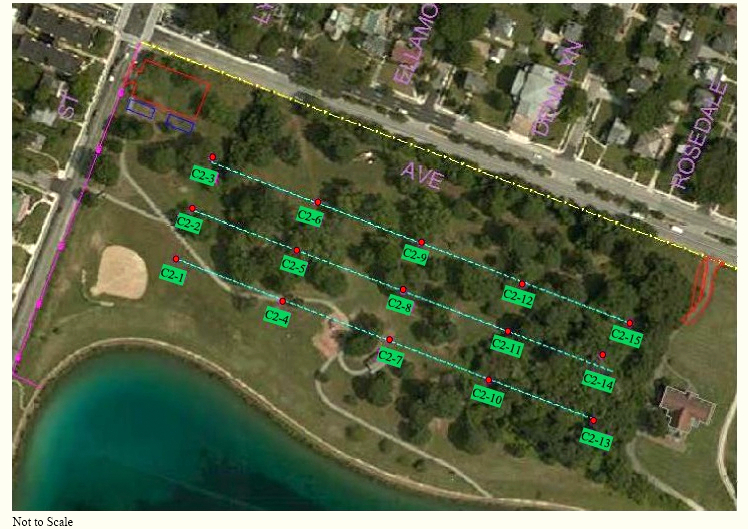 An aerial view of Hanlon Park before the trees were cut down. The green blocks show where soil was recently sampled. BELOW: Residents stand near Lake Ashburton, a reservoir south of Hanlon Park that will not be touched by the tank construction. (Mark Reutter) 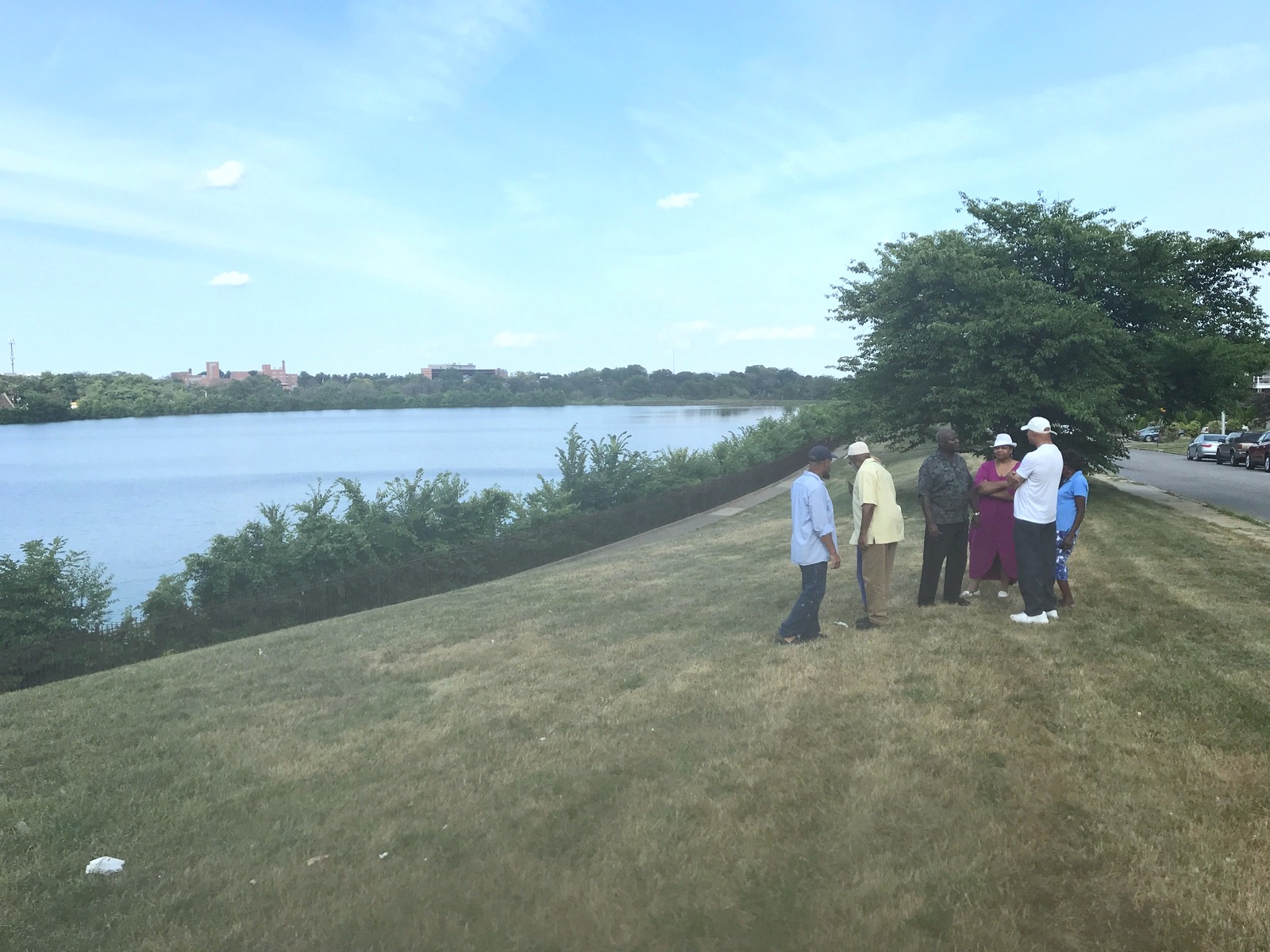 The councilman demanded that DPW produce a dust management plan, a rodent mitigation plan, a neighborhood communications plan and a traffic plan within the next week.

All of these activities should have been done before the tree cutting and land clearing began, he said.
______________________________
Tonight (July 25) DPW will hold a public meeting on the Druid Lake tank project at 6 p.m. at the Ashburton Filtration Plant, 3001 Druid Park Drive.
_____________________________
Pinkett also said he backed the community’s demands to truck away the soil found to contain CrVI and forbid the contractor from blasting out the hard Baltimore Gabbro Complex rock that lies beneath the park’s surface.

DPW officials did not respond to Pinkett’s final demands, which would require major changes to the $137 million contract it entered into with Texas-based Oscar Renda.

The current plan gives Oscar Renda 1,570 days – nearly 4½ years – to blast out two enormous holes in Hanlon Park, place two tanks in the holes and tie the tanks into the city’s water system.

The end result would be a new park with 288 small trees planted along the perimeter of the buried tanks with open playing fields placed on top of the tanks. (There can be no trees near the tanks, a DPW engineer explained, because their roots could cause damage.)

“So we will have a donut hole, not a park,” exclaimed Pinkett, as another audience member protested: “We don’t need another playing field. We need our trees.” 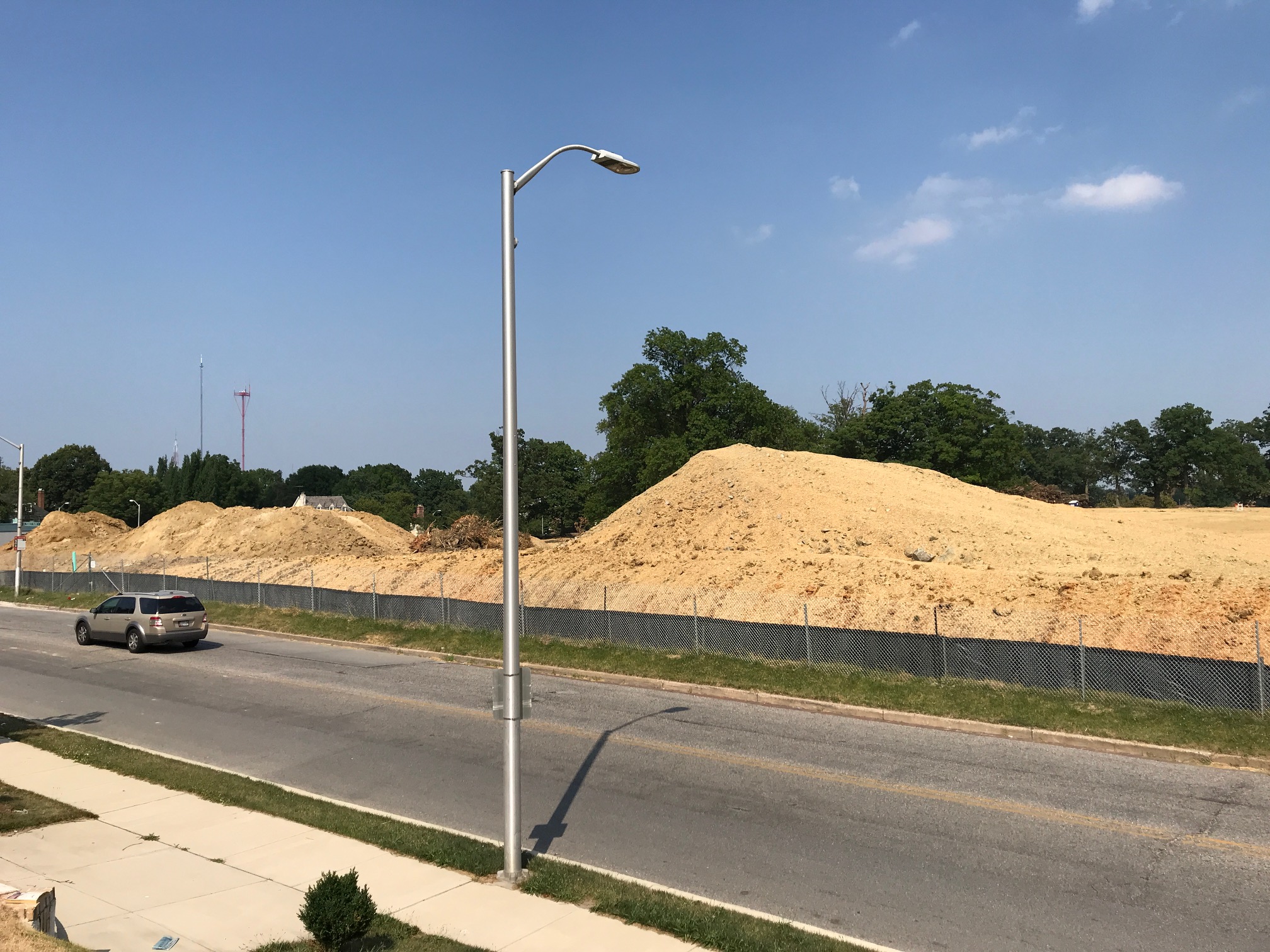 Once tree-lined Hanlon Park resembles a desert along Hilton Street. BELOW: More piles of dirt and tree debris have been bulldozed against Liberty Heights Avenue. (Mark Reutter) 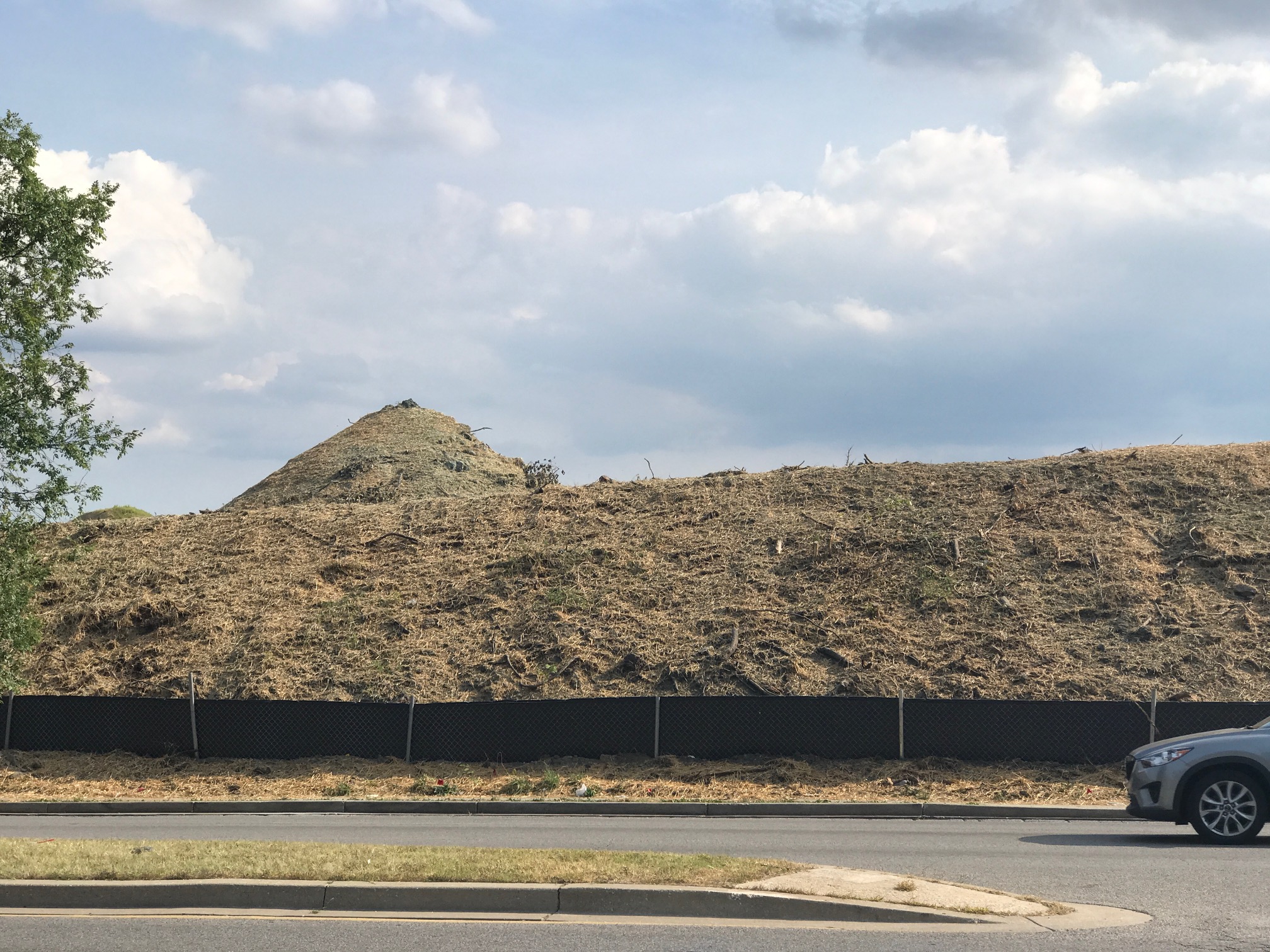 Mark Mank, a toxicologist for MDE, said the levels of CrVI found in the soil samples are safe for recreational use and for residents living adjacent to the park along Liberty Heights Avenue and elsewhere.

While six soil samples had chromium levels that exceeded the EPA’s Regional Screening Level Table, they did not reach a concentration that would represent any health risk or require removal of the soil from the site, Mank told the residents.

Oscar Renda plans to store much of the soil at Hanlon Park for up to three years, then use it to cover the tanks and backfill the area.

Because Hanlon Park had no history of being the site of an industrial plant, DPW did not perform soil testing prior to clearing the land, Lauren Swiecicki, chief of engineering and construction, disclosed last night.

The soil’s chromium levels were only discovered because some of the dirt was slated to be transported to the former Sparrows Point steel mill, a clean-up site under the jurisdiction of the MDE. The site’s owner, Tradepoint Atlantic, was required to do testing of the soil.

MDE found the levels would be safe to deposit at the former Sparrows Point steel plant.

An analytical report by Hillis Carnes Engineering Associates found “spikes” of CrVI in a number of Hanlon Park soil samples. MDE evaluated those samples and found the levels  would be safe to deposit at the former steel mill.

Pressure from the community and Councilman Pinkett, however, resulted in DPW requiring Oscar Renda to undertake an independent analytical study after it had cleared the park of trees.

This study, prepared by Arc Environmental, found samples of CrVI as high as 16.6 mg/kg. These were above the screening level, but below the 23 mg/kg threshold of MDE’s Residential Cleanup Standard for hexavalent chromium. 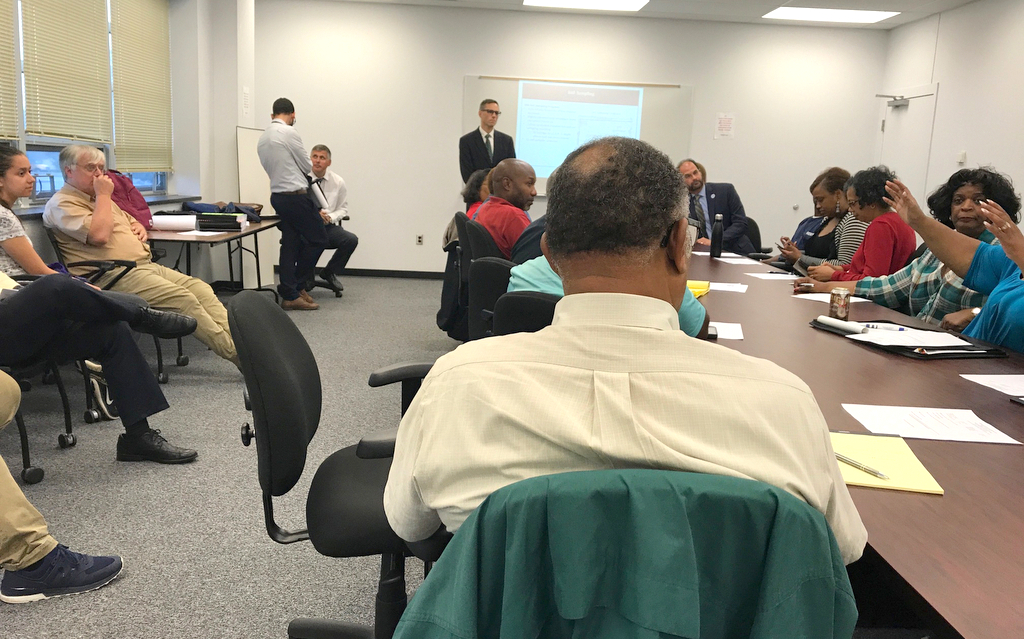 The soil samples were limited to borings of 11½-foot depth. The contractor expects to dig 50 feet into the bedrock in order to install the two underground tanks.

The tanks are being built to comply with federal regulations regarding safe drinking water. Municipal utilities were given a choice to treat stored drinking water with more chemicals or build covered storage tanks.

Both projects, totaling $272 million, were awarded to Texas-based Oscar Renda.

The Rawlings-Blake administration opted to build underground tanks at its two major drinking water reservoirs at Lake Ashburton (adjacent to Hanlon Park) and at Druid Lake (in Druid Hill Park).

The process of draining Druid Lake is currently on hold, pending MDE’s approval of a de-chlorination plan that meets environmental standards.

5 p.m. 7/25 UPDATE: DPW’s plan for de-chlorination at Druid Lake has been accepted and the pumping out of lake water has resumed, said MDE spokesman Jay Apperson.

Councilman Pinkett said he is waiting for DPW to respond to his demands for removal of the disturbed soil and no future blasting at Hanlon Park.